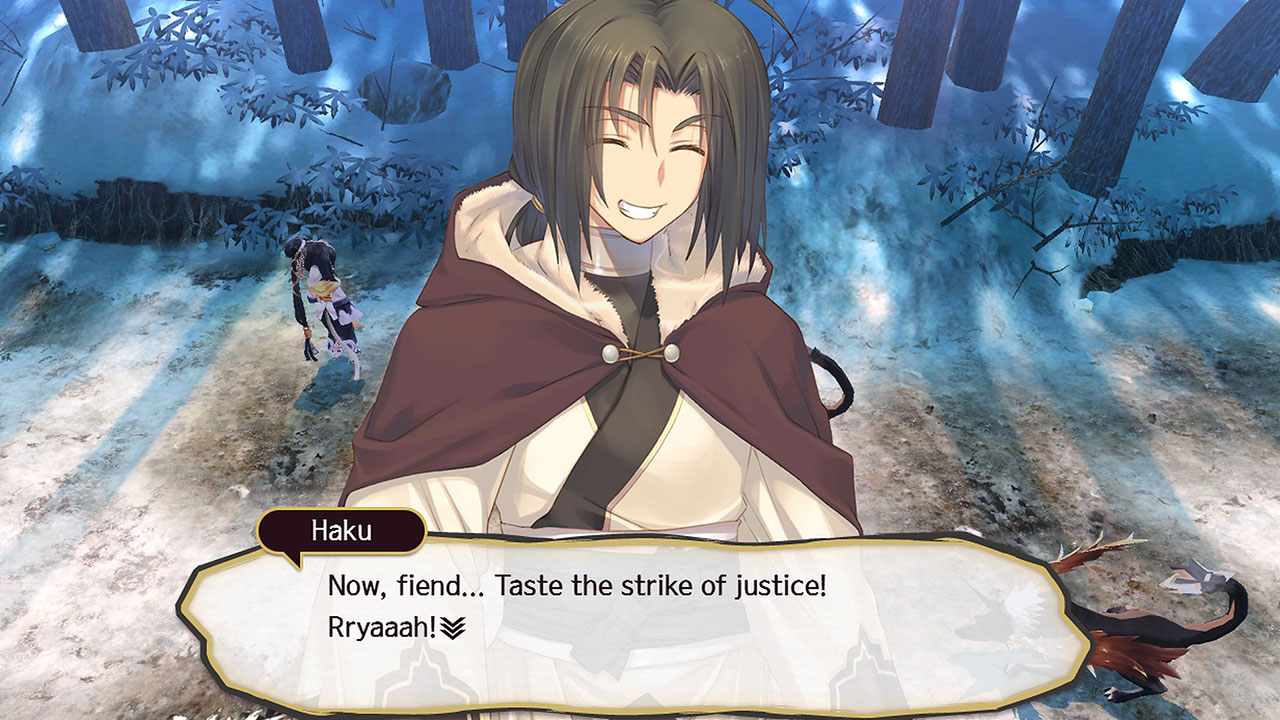 As a general rule I try and play a game for about eight hours to review it. Doesn’t matter if it’s a complete stinker, eight hours gives me a good enough idea of what the game is all about. If I’m really enjoying it, I’ll play it for longer. I played Utawarerumono: Mask of Deception for over eight hours and I honestly don’t think I can give a very accurate review of how it plays. Mainly because this is a visual novel before it’s a game.

The story starts off with an amnesiac wandering around a snowy mountain dressed in nothing more than a hospital gown. He’s attacked by a giant insect and rescued by Kuon, a hybrid animal-human with furry ears and a tail, who decides to name him (Haku) and take him along with her on her journey. After an hour of reading through the story, I was finally allowed to take part in an interactive battle. 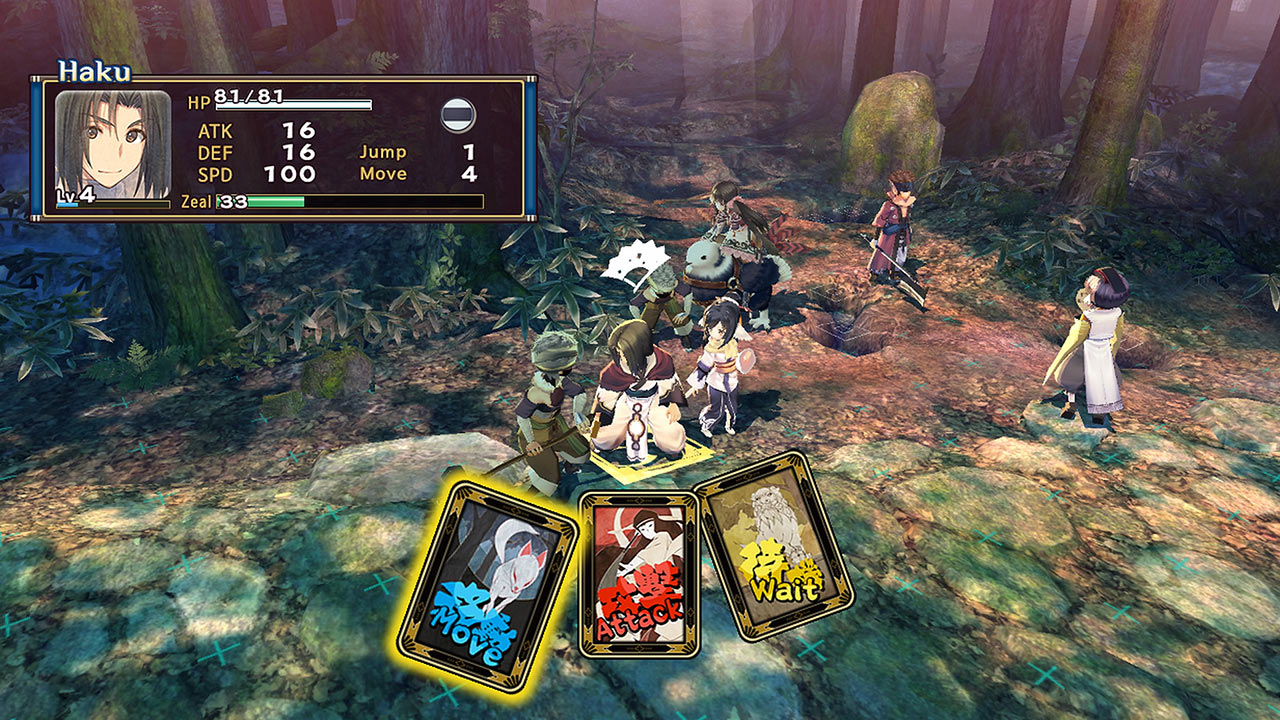 When it’s time to actually play, it’s a turn-based strategy game similar to Final Fantasy Tactics or the Fire Emblem series. Objectives are displayed in the top right, turn order in the bottom left, each character can move and use an action such as attacking or casting a spell. Most actions involve a mini game that can be used to deal additional damage in the form of critical hits or chain another attack that is performed directly after the first. As per usual, defeating enemies rewards experience which levels up your party and makes them stronger. The first battle lasted just under five minutes. I didn’t get to fight again for another three hours.

I was sent a little brief from the developer with my review code asking me to avoid spoilers whilst writing a review, but in all honestly I couldn’t spoil anything even if I wanted to because the story moves along at an absolute snails pace. At one point Haku and Kuon were discussing the best way to make a little wrap filled with meat and vegetables. There was a scene in a bath-house where Haku unwound after a long day of walking. Haku fixed a mill used to grind a grain into flour. We met a band of mercenaries who joined our party and we made our way to the capital city, where we met a princess. The game manages to craft a rich world full of culture and history, just be prepared to slog through walls of text to get to it. 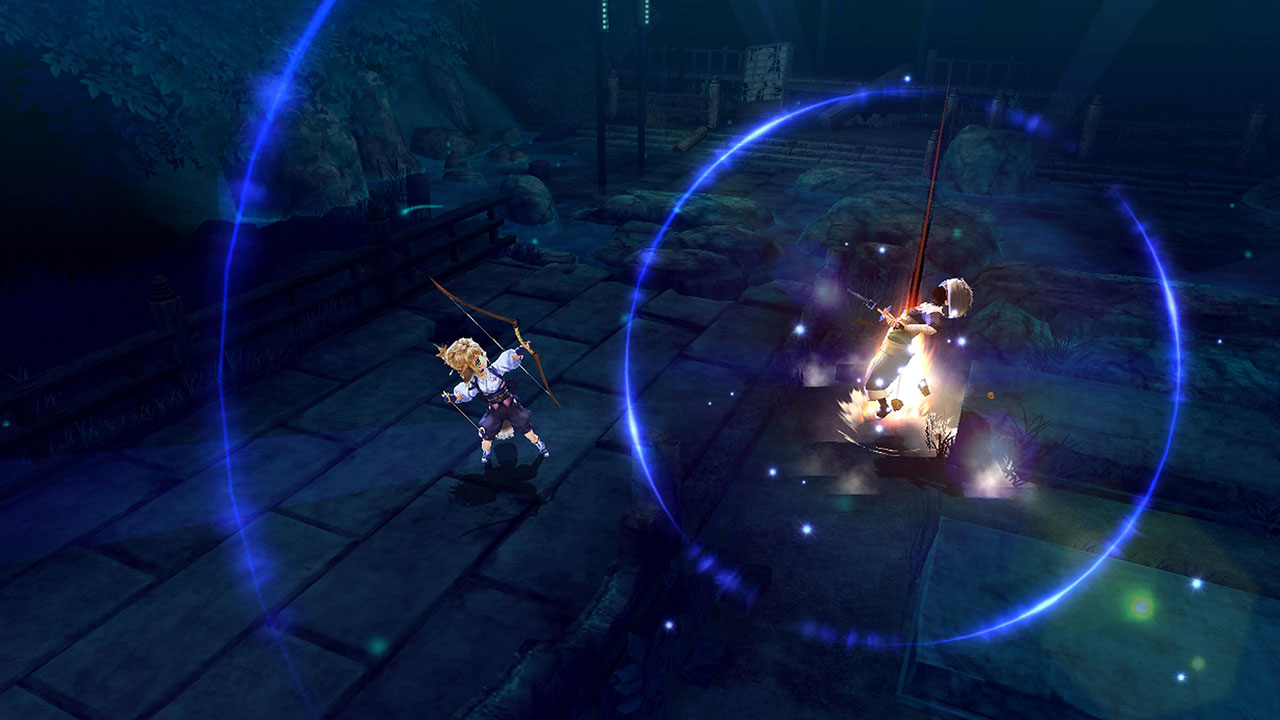 It’s presented in an anime style, so visually the game does look very nice. The characters and locations have been drawn beautifully, but during the story segments there is very little movement at all. Expect a couple of characters to stand around doing nothing while you read through walls and walls of text. I saw one cutscene at the start of the game which looked as if it had been taken directly from an anime (this is the first I’ve heard of this series, so I’m not familiar with it at all), but that was it. During battle and a few moments during the story characters are rendered as little 3D models, which look OK but are not exactly breath-taking. There were swipes and flashes as I performed different attacks but nothing is really going to blow you away. The sound design is perfect. If you speak Japanese. Every single piece of dialogue has been voice-acted but as I don’t speak the lingo, I got stuck reading like a nerd. The music is atmospheric but can get a little repetitive as you slog through reams and reams of text.

If this is your sort of thing, go for it. In the brief I received with the code, I was promised fifty plus hours of story, so there’s plenty of bang for your buck. I’m a fan of anime but I could only tolerate ‘playing’ Utawarerumono: Mask of Deception for so long, and if I’m being blunt, I’m not that eager to dive back in. The interactive battles are too few and far between for my liking, and the story plods along a little too sluggishly. Levelling my characters didn’t feel satisfying at all, mainly because there just wasn’t enough opportunities to play with them. But as I mentioned earlier, I don’t think I can review this game properly. I don’t have the time to sink into reading a visual novel that occasionally lets me take part in a battle or two. I prefer my games to be games first, but that’s just my opinion.

It’s presented in an anime style, so visually the game does look very nice. The characters and locations have been drawn beautifully, but during the story segments there is very little movement at all.