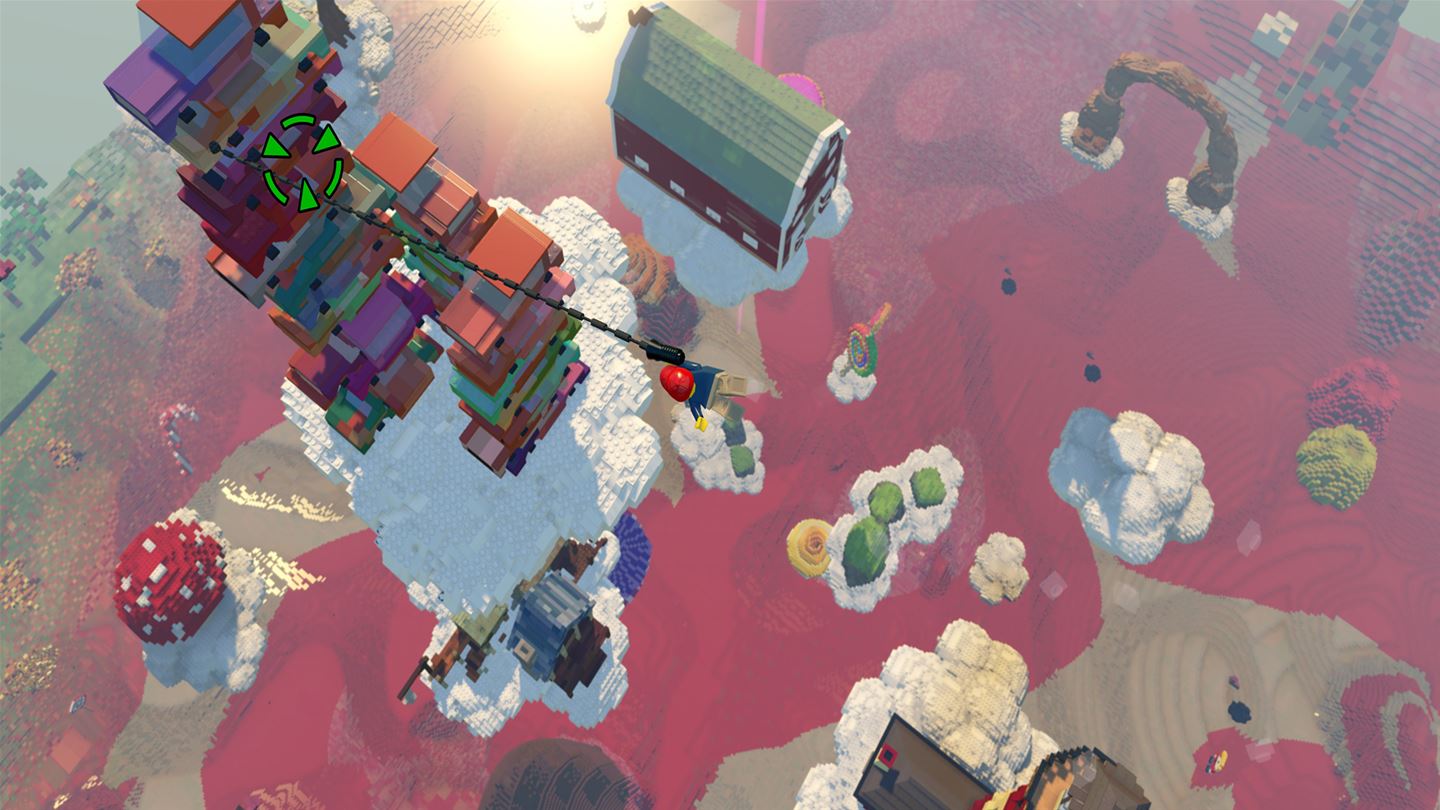 A vast, expansive land. Colorful designs and unique creatures abound. A chance to explore, and to create. Infinite possibilities and projects that could take hours, days or longer to build. This literally could describe any number of games that’ve come out in the last eight years, as crafting, sandboxing and any other number of “you make this game, we’re taking a smoke break” approaches have been utilized. From Minecraft to the crazy popular Dragon Quest Builders, making your own stuff has become a giant past time for children and adults around the globe. And now, the grandaddy of them all, LEGO, has come to town.

LEGO Worlds is not virgin territory for the blocks-turned-lifestyle toy. LEGO games have literally been made for decades, and even one of the first entries, LEGO Creator, was all about building stuff with LEGOs. Recently, LEGO has taken a pretty solid approach to mixing serious subject matter and/or franchises and infusing them with child friendly nonsense and often hilarious 4th wall shattering humor. The LEGO Batman Movie is one of my favorite recent animated pictures, and my kids agree. LEGO Worlds is just a continuation of this thematic, but with a much different approach. You have a choice between Adventure Mode and Sandbox Mode, with rumors of an incoming Survival Mode in the near future. Traveller’s Tales, who’ve had a long history of developing LEGO games, has been pretty good on communication with their fanbase, even addressing the ugly logo on the Switch and promising a prettier one in a future update. At the very least, that needs to be commended.

Story Mode is a grand little adventure, mashing up elements of No Man’s Sky and Garrys’ Mod. I know that exact description has been repeated around the web, but it’s a pretty succinct and accurate depiction. You’re a LEGO person who’s spaceship crashlands on a pirate planet, and you need to repair your ship before you can go off to other worlds. You do quests for the natives, which also serves as an early tutorial, and learn how to use the different tools in your belt to learn, create and modify a ton of items that you find around the worlds. Once you do enough quests and get your ship up and running, you can then start to explore the cosmos further and further by doing more quests and getting Gold Blocks. More gold blocks means a higher level of builder, and you slowly work your way towards Master Builder while seeing the sites and doing all sorts of interesting and colorful quests that were never particularly difficult. 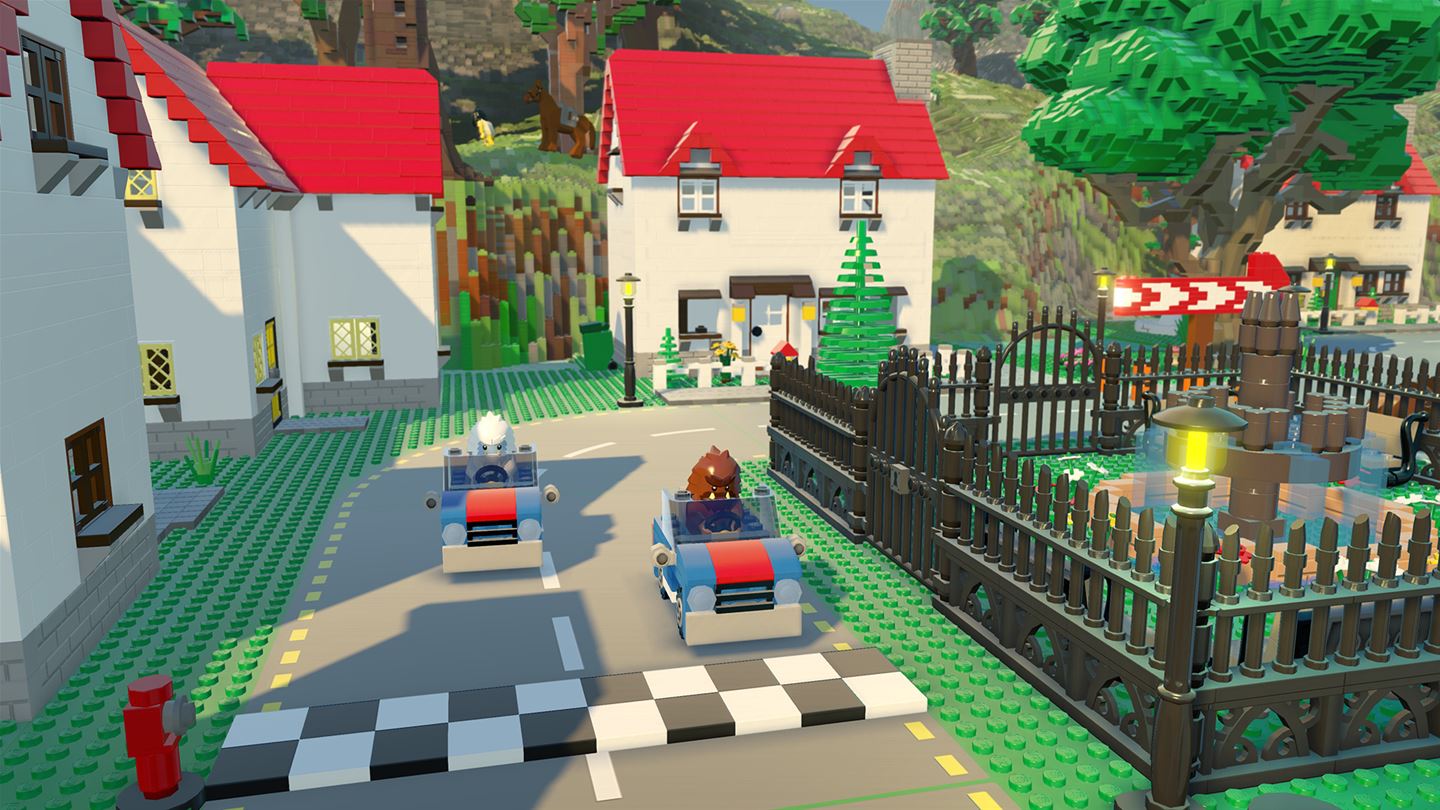 The reason I compare LEGO Worlds to Garry’s Mod is also a big differentiation from Minecraft and several other crafting games. LEGO Worlds absolutely allows you full control, brick by brick, if you are a purist, this is true. And some players are going to want to take this approach. But you also have the option to automatically spawn anything that you’ve previously scanned into being whenever and wherever you like. Did you enjoy those swinging vines from the caveman world? Cool, pop them up here in the city streets of wherever! Really missing those adorable penguins from the ice world? They can come and visit you in the monster world as well. In fact, if you really want, you can take the time to build something from scratch (let’s say a gazebo, people always build those) and then scan it with your gun to mass produce later. LEGO Worlds, as much as it’s about creation, is just as much about exploration and innovation. You don’t need to do anything the same way twice, and the game almost demands that you don’t.

Graphically, I’d say that LEGO Worlds looks pretty damn good on the Switch. Everything is limited by the inherently blocky nature of the landscape, and I think that works out in Nintendo’s favor. I never noticed any slowdown in single player mode, though the framedrops when doing two player was pretty noticable (more on that in a moment). There is a huge variety of colors, textures and shapes that can be adhered to pretty much everything, so you can really make the game your own. My biggest complaint with the visual appeal is that it took way too long for me to unlock and meet enough characters to make my avatar look the way I truly wanted, but you’re still given a good spread at the start, and it’s quite nice to be able to change into anything else on the fly.

Two player mode in LEGO Worlds is….ok. Having a second player on the screen does cause you to lose real estate (since the split screen gives you equal freedom) and, yea, there’s some serious drops when you’re both doing stuff at the same time. However, another person to help you run errands does make the quests go faster. Sort of. Player two is always a guest, so, even when player two does all the heavy lifting, the NPC makes a point to seek out player one, however far away he is, and give him the golden brick instead. Kind of a slap to the face, no matter how innocent the entire thing is. Also, only one of you can really ride in the spaceship, so I always felt like I was leaving someone behind when I took off to a new world, and, by coincidence, I met someone exactly like them when I landed. 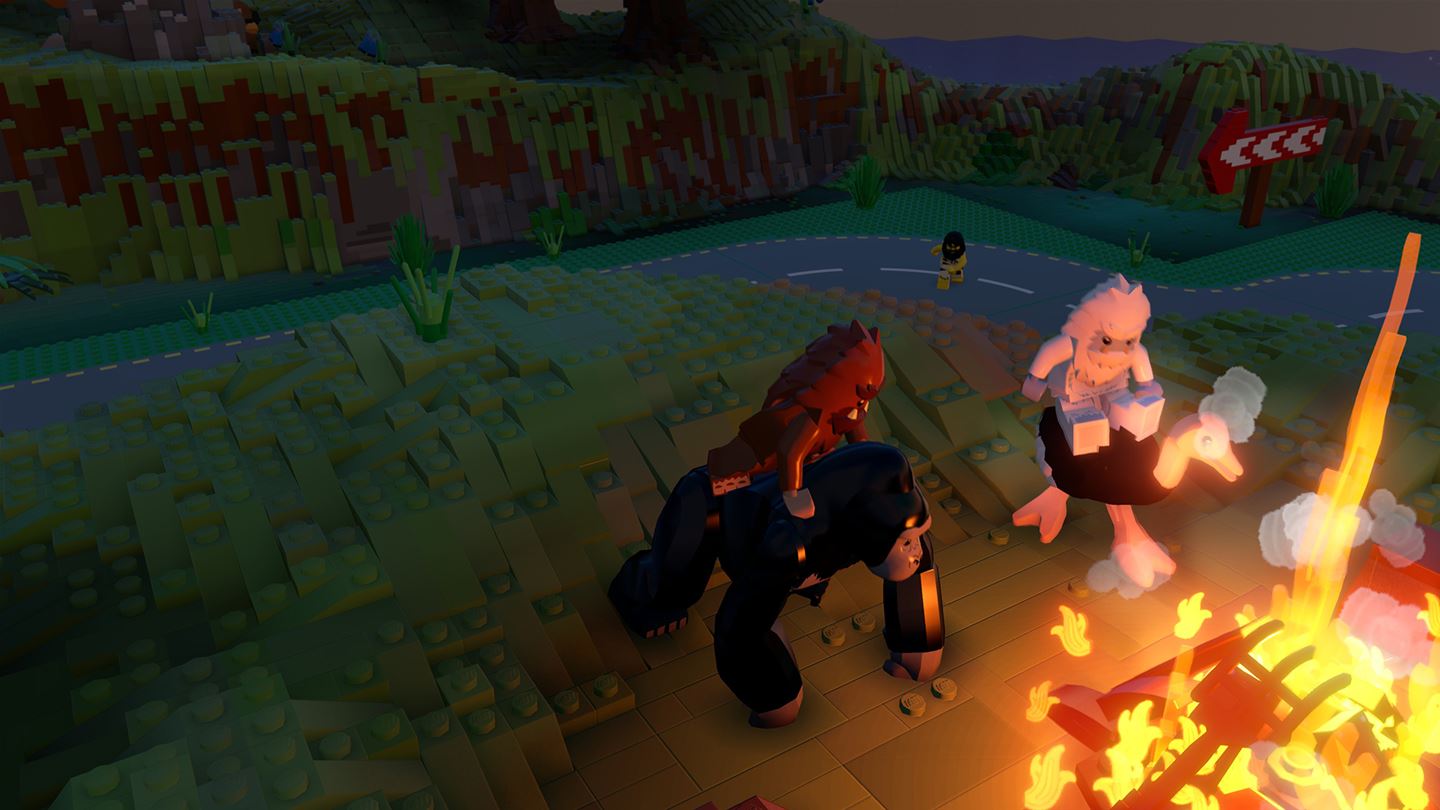 The Sandbox Mode is going to be where people either make or break the game as it stands now. Not only is it an open arena to build to your heart’s content, it’s also an excellent spawning ground to play with a friend and see exactly what happens when A meets B. This is where I was intensely reminded of Scribblenauts, a game that also promised limitless possibilities and kinda sorta delivered. The Sandbox has a lot of adjustable variables to it, from how the landscape appears to the exact size of the world itself. In Adventure Mode, you really get focused on wanting to do the quests and find out what’s beyond the horizon, but here you can find out what happens when you spawn ten pigs in a viking longship and then change the ship to lava (hint: everyone dies). It’s a funhouse that only gets better the more you explore in Adventure Mode, and, at the time of this writing, there’s been 18 months of free updates and added stuff promised. Time will tell how true this will be, but I’m politely hopeful for a long life ahead of LEGO Worlds.

There are issues, of course, but not ones that I encountered. There’s a lot of advertising for online co-op, and there currently isn’t any in the Switch version. Not sure if this is a clerical error or what, but people want to play online with friends. All my friends are dead or nearby, so they can just march themselves over to my house, drink my beer and get hit by my octopi, thank you very much. Additionally, there’s been a lot of talk about crashes, including some people who’ve had corrupted save data. This makes me quite nervous, especially since LEGO Worlds has four save slots and two of them are occupied by my children. We haven’t experienced any crashes yet, but we also haven’t pushed the game as far as it could go. And kids are resilient, but I don’t know how I’d explain that the fun lands they’ve been making and sharing together are just gone. Hopefully the entire debacle is dealt with and amended with future updates.

All in all, I like LEGO Worlds. It has the fun energy of the LEGO games with less referential material and more opportunities to do things yourself. I had zero control issues and the different tools are intuitive and versatile. I would like more Worlds, in all honesty, so that I can incorporate more into my sandbox, but this is a new game: time will tell. If this was all I got, it’s half the price of Minecraft, and I might be inclined to recommend it to someone who wants to build but doesn’t want to waste WEEKS making a scale model of Newark, New Jersey. There’s simply no replacement for the king of builders, but LEGO Worlds isn’t here to dethrone, or even try. It’s a great exploration with tons of potential for future hilarity, and I will be keeping this in my top titles on the Switch until Nintendo updates the damn firmware so I can actually arrange my titles.