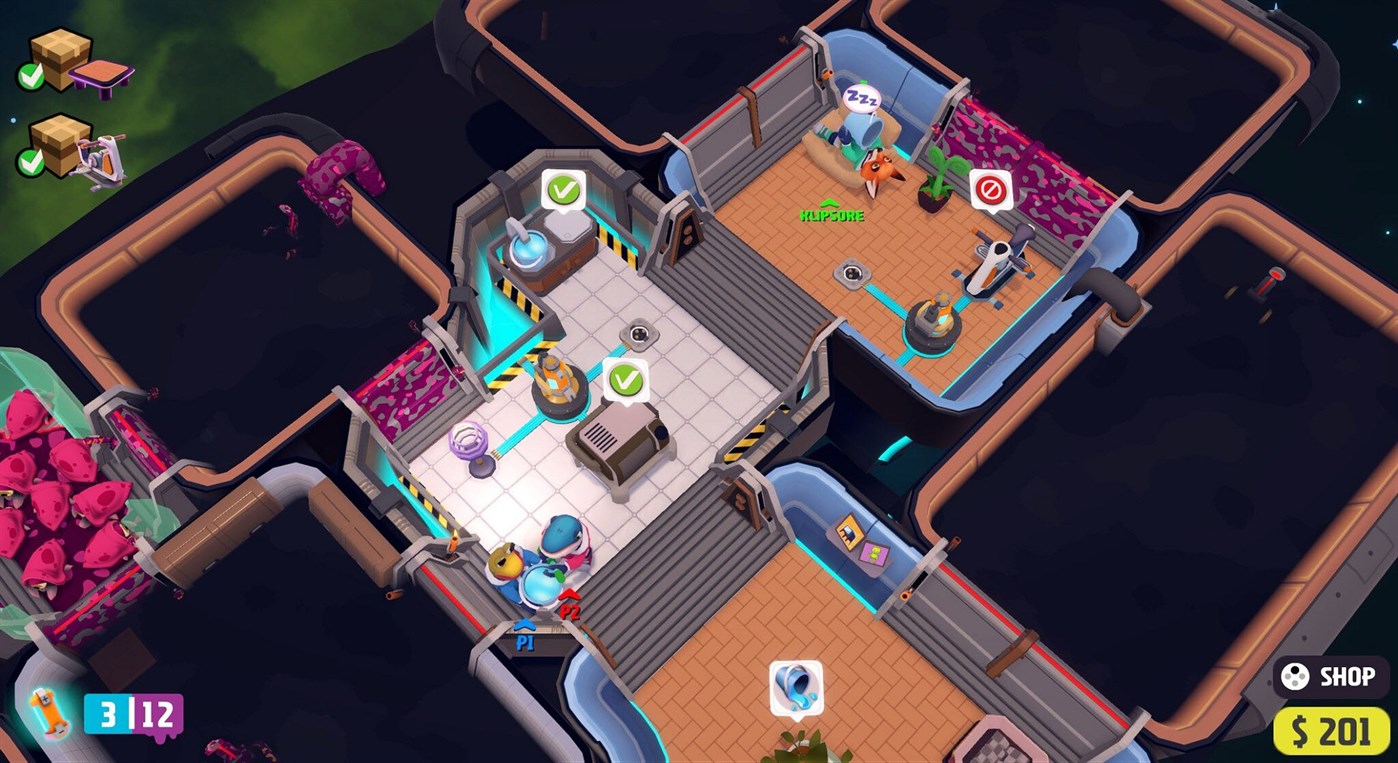 I’m a bit of a sucker for co-op games, especially when I know that at some point there will be a blazing row, and awkward silence. It’s like when you break out Monopoly at Christmas, already resigned to the fact that someone will throw their toys out of the pram, and one person will be heartless and take no prisoners. What I like about the couch co-op gaming genre is the requirement to sit around one TV a la 1990s student living. Out of Space has been available on Steam since February, and has received some fantastic reviews, and feedback from its community. The developers have built on this success by releasing a console version (24th November 2020) known as Out of Space: Couch Edition. Developed by Behold Studios and published by Plug In Digital this addictive and frustrating space simulation game will have you; laughing, crying, and screaming with rage.

The Steam version is almost identical to the console offering, but with one major difference, and that is shown in its name “Couch Edition”. The console version is a solo, or up to 4 player local co-op game only! In the current climate this does impact the ability to play it to its full, but if you have a household of willing, and able volunteers, then you can all work together to achieve all the goals, and be a success in this housekeeping space simulation.

The game premise is simple and brilliant. You control one creature whose goals are to; power each of the rooms on their floating space house, and to take care of their pet dog, who is loyal, and is extremely helpful throughout. This is until he wants food, or drinks all the water from your bucket. The ships come in set sizes; small, medium or large. Each has several rooms that must be cleaned, powered, and have its alien infestation removed in order to be successful. There is no time scale set for you to achieve your goals, but the longer you take, the more chance that the aliens will attempt to take control of your house. You must make a strong plan, follow it, and pray that luck is on your side.

As you progress through each game, you will be given unique tasks to complete, such as; cooking aliens, building furniture, completing games, and so forth. If you can finish the task, then you will unlock new furniture and characters to select from. The furniture that you unlock aids you during your playthrough. You may unlock electrical goods that earn you money, or help you work quicker. Furniture can reduce your fatigue and help you recover quicker. Decorative objects, add a positive effect, and can be easily overlooked, but they are  the difference between a simple run, or constantly battling for success. The drip feed of additional items helped to keep the gameplay fresh and meant that I was constantly adjusting my strategy at the start of each game. 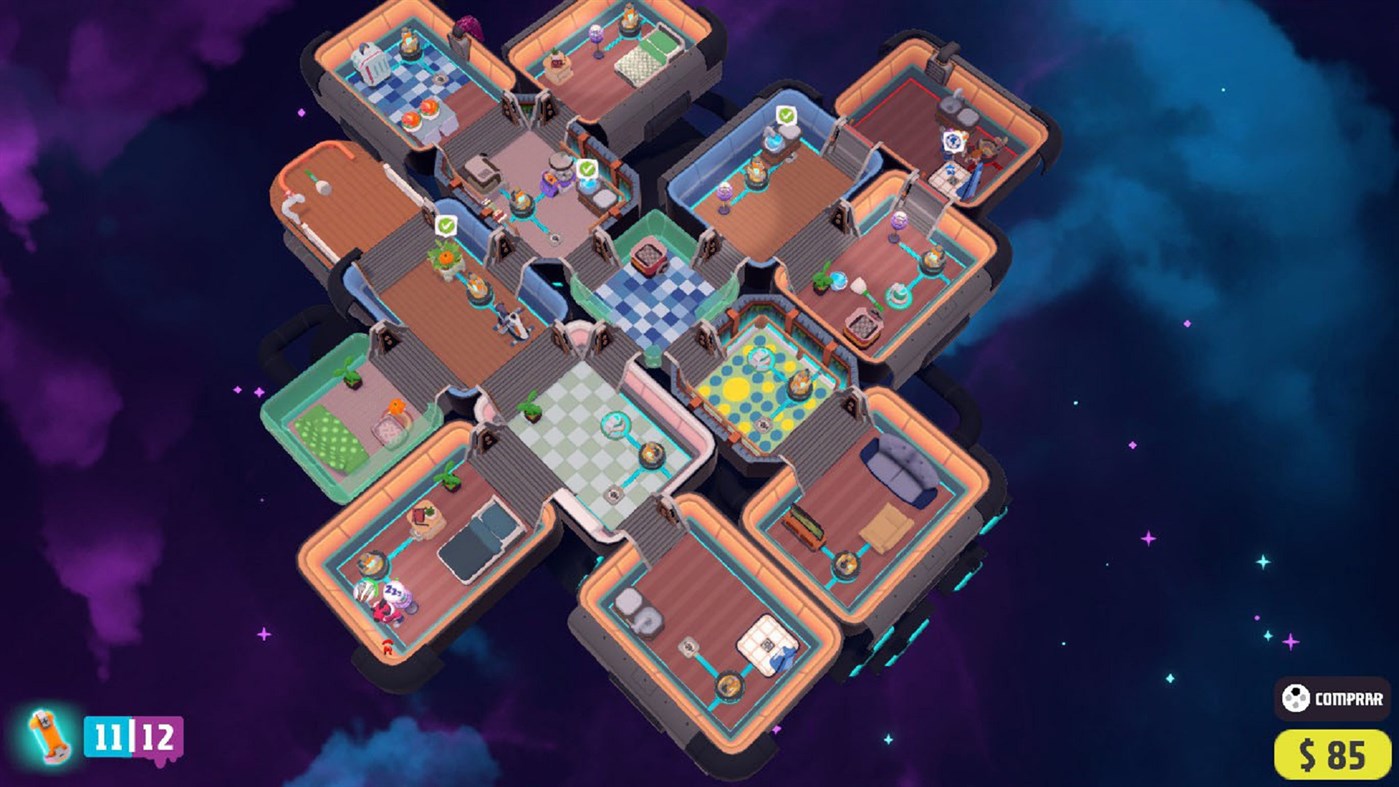 Talking about starting a new game, you will load into a procedurally generated space house, so no game is ever the same. The opening two rooms follow the same pattern, but after that, you must think on your feet, and take a different approach each time. The larger the space house, the longer a game will take. You think you have got on top of it, and you only have one room left to go, but if you drop your guard for even one minute, the house of cards can come tumbling down, and all your hard work can be undone quickly.

Like with the addition of new items, the developers were kind enough to add new aliens, these new beings make life much tougher. With hardened shells and spikes that stab at you as you try to move them, you must adjust your approach to each room as you discover which alien foe you must face. I loved the not knowing what would happen as you broke into each room, but it was also frustrating as hell when it all went wrong, and your hard work disappeared before your eyes. The aliens were persistent, adventurous, and destructive. They love to destroy your batteries, and can set you back to the dark ages quicker than a blink of the eye.

Unlike other couch co-op games, such as; Overcooked, Moving Out, or Tools Up, Out of Space: Couch Edition doesn’t technically have any progression. Yes, you get your tasks to focus on for each game, but you don’t jump from level to level, increasing the difficulty and adding new mechanics. This different approach added a sense of repetitiveness, but I loved how each game differed from the last, and if you add in the unknown of how up to 4 of you will compete together, then it can be a recipe for disaster, or success.

The action takes place from a fixed position, bird’s-eye perspective. You have a clear view of the layout of the ship, and its obvious which sections you have explored, and which ones you haven’t. The unexplored sections are shadowed in darkness and usually have bright purple/pink slime against the doors. The developers have not given the option to rotate the camera, and for me this was a mistake. Though you get used to the level layout as it is set, you find that you jump from game to game, and the ship will face in different directions. It was disorientating, and annoying that I had to adjust for the ship positioning, and it took a few moments to familiarise myself with how I’d approach the new look layout. The character designs, and the world that you live in, is a colourful and vivid place. Each of the aliens has a distinct look, and it was easy to identify each by their different colour and design. The game can get hectic, but all your interactive objects are pinned to the screen, so if you drop one while completing a task, it is easy to find them amongst the chaos. Though I found parts of the visual presentation frustrating, mostly it was easy on the eye, and worked well. On the Series X it plays really smoothly, and I noticed no graphical glitches or problems. 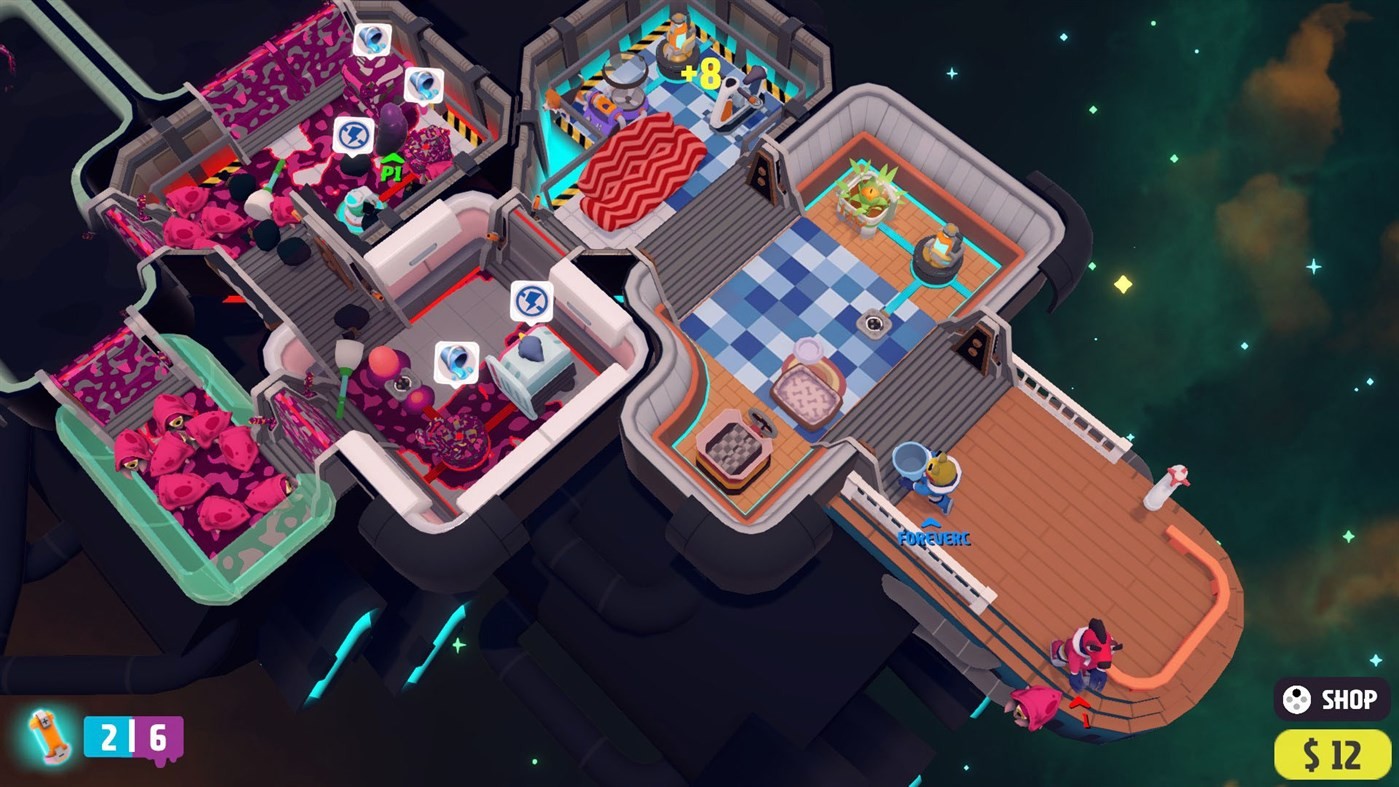 Another plus of this genre is the whacky music, and over the top audio that usually accompanies the action. This game absolutely follows this trend. The music starts quite mellow and has an air of lift music/ hotel lobby. As you progress, the tunes become more upbeat, and ramp up the pressure on you. I could feel myself getting anxious as I anticipated victory, but knew there were still plenty of hurdles to overcome. To match this brilliant music, you have the noises that go with every action you complete. Pinging of microwaves, the swish of your brush, and water rushing as you water plants, and clean floors. In amongst all this you have the sound of your dog barking and whimpering as it helps you to progress, or demands attention with food or water.

I’m going to be a little picky with this next part, but that’s only because the rest of the game plays so well. Each of the rooms can be tight for space, with objects ending up lying on top of the other. When this happens, it’s difficult to select the item you wish to use. When time is of the essence, this can make for an unnecessary distraction, and I lost several games because of this issue. I can imagine that this would be further compounded when you have several players all trying to rush into rooms, eliminating the aliens, and trying to complete all the little tasks. Other than this problem, the controls are easy to understand, and a thorough, yet simple tutorial sets you up to understand most of the gaming premise before you are set free on your own ship.

As with other couch co-op games, this one has replay value in abundance. From the moment I switched it on, I knew that I would be addictive as hell, and I wasn’t wrong. I lost hours of my life to it, only stopping to check on some other games that I have been playing recently. I can imagine at a small gathering (lockdown permitting), that this would be a great laugh, and would keep you all entertained for that evening and for many more. The only thing that would increase its desirability would be the inclusion of online play, and maybe this is something that could be considered. If you like to gather all your trophies/achievements, then you are going to have a tough time with this one. The list is comprehensive and brutal. Having good gaming friends will be the only way that you will achieve every one, and even then you will have to hope for a lot of luck to be on your side.

This genre of games has given me some of the greatest joy, and this one has added to that. Frankly, it’s brilliant. The mixture of crazy technology, procedurally generated levels, and difficult aliens makes for the perfect recipe of addictive and tough gameplay. This is a must have game to add to your library. It received great reviews on PC because it is fantastic fun, and I can’t see it being any different on console. I strongly recommend that you buy this game! If you play it solo, or with others, you will have an excellent experience. Grab your mop, bucket, and dog. It’s time to clean up your space house one room at a time, just watch out for the aliens.

Out of Space: Couch Edition Review

A hectic space simulation game where you must clean, and power your way to victory. 1 to 4 players must work together to remove the aliens, and clean up.