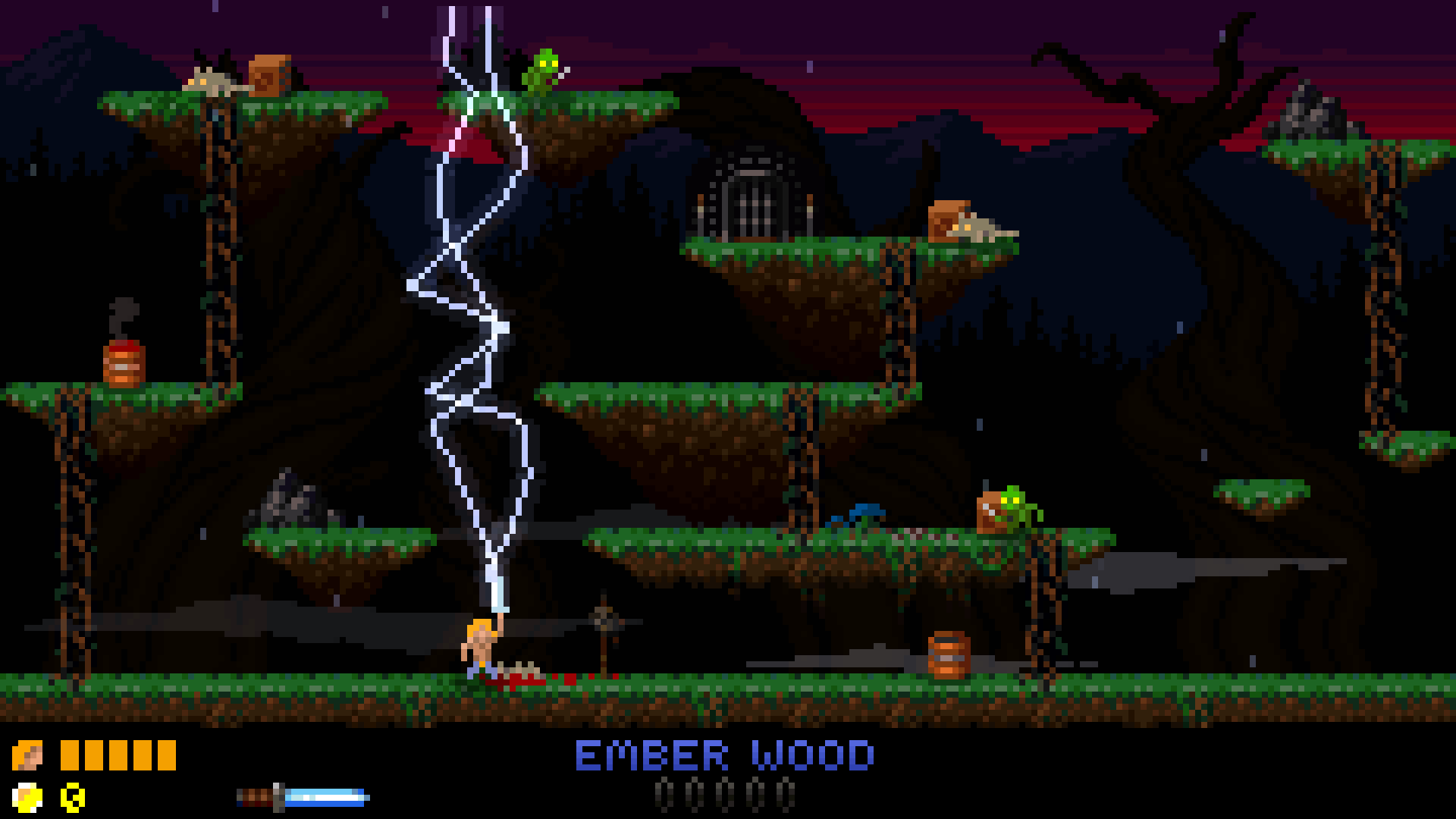 There is an ever increasing amount of nostalgic indie titles being released across the consoles. Ratalaika Games seem to be proactive on these releases with several a month appearing. If you remember the Atari or Commodore days, then Thy Sword will bring back several memories of hack and slash platformers, Thy Sword even manages to replicate the graphics of that era as well. The question these days is whether nostalgic games like Thy Sword still have a place in today’s market. Hopefully, Thy Sword is one of those that reaffirms that belief games that look like they are from the past still have a place for this generation.

In the land of Nhaastans things have gone badly and it is up to you to hack and slash your way through Thy Sword. Mixing hacking with platforming you must kill every enemy on each level before you can proceed to the next. In Thy Sword you begin by making a choice between two characters. One is the classic Barbarian who starts off with a handy Broadsword or the Valkyrie who possesses a bow and short sword at the beginning. There are a number of levels with some choice in terms of which order you decide to play them. Each level is made of a series of days, you must complete each day to move onto the next, if you die then you return to Day 1 and have to go through the gauntlet once more. 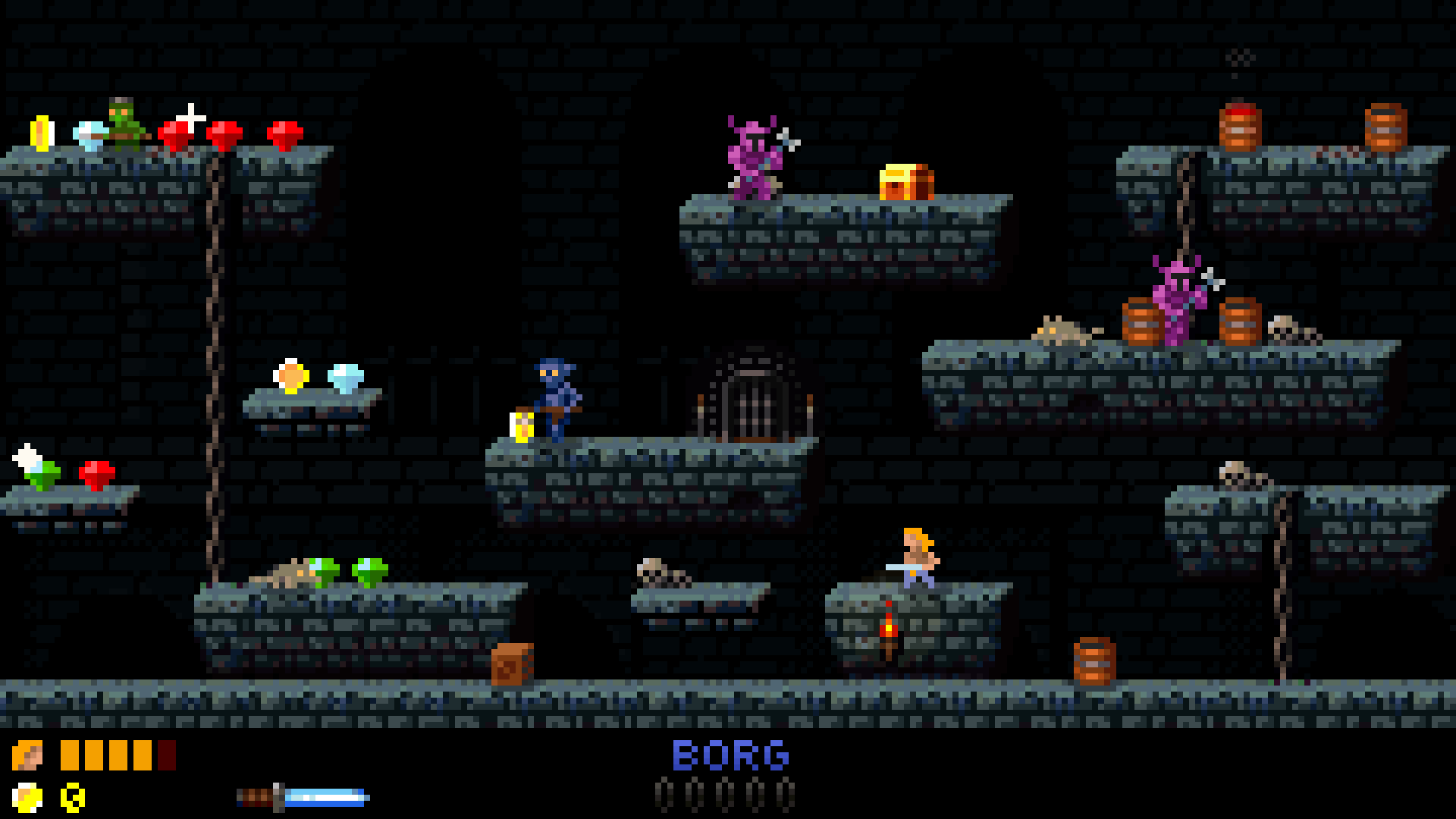 Thy Sword is one of those titles where the levels are procedurally generated, so should you die and have to replay a level its structure in terms of design and enemies will be different each time you play. This kind of design appears more in current indie titles, it’s a personal preference if you think this is a good or bad thing, in Thy Sword it works as it mixes things up a little. To progress to the next day within a level you must vanquish every enemy that is on screen. These range from goblin like creatures to club carrying trolls, they will inhabit a platform and generally stay there unless you hit them when you jump, in that case they are likely to drop down a platform or two. Some of the levels contain bosses who are fairly simple to defeat as long as you have stocked up accordingly. In between the levels there is a safe area you visit before you recommence your adventure. There is a gambler who you gamble up to 100 coins with and play a game of Blackjack, if you beat them you double your wager if you don’t then you lose it. Coins/Jewels are gathered from fallen foes. You can cheat a little at this point because you can simple save before each Blackjack game to increase your funds. There is also a person who sells health items and another who sells weapons, it’s important to purchase items such as the Double Jump and & Flaming Sword because it makes Thy Sword much easier. You’ll be able to dispose of enemies in only one or two strikes with the Flaming Sword.

Some of the levels in Thy Sword have some structurally variety to them. For example there are night stages so you can only see what’s around you so it’s wise to edge yourself forward. There is a volcanic stage where molten lava drops from the skies. It adds a bit more strategy to what is a fairly simple hack and slash title. There are various boxes/barrels placed within levels, some have coins, some have nothing and if you’re unlucky some even contain enemies. Interspersed within some of the levels in Thy Sword are opportunities to save people, if you do then they become a playable character on your next run through. These include a Paladin and Rogue characters who start off with some additional items. Unfortunately these opportunities are not highlighted before a day begins, you just happen to come across them. There was a level where something set alight and there was a countdown, there was no explanation given so whatever that prize was i don’t know. There’s also a thief that runs along the bottom of the screen who can stab you, again it’s not explained. 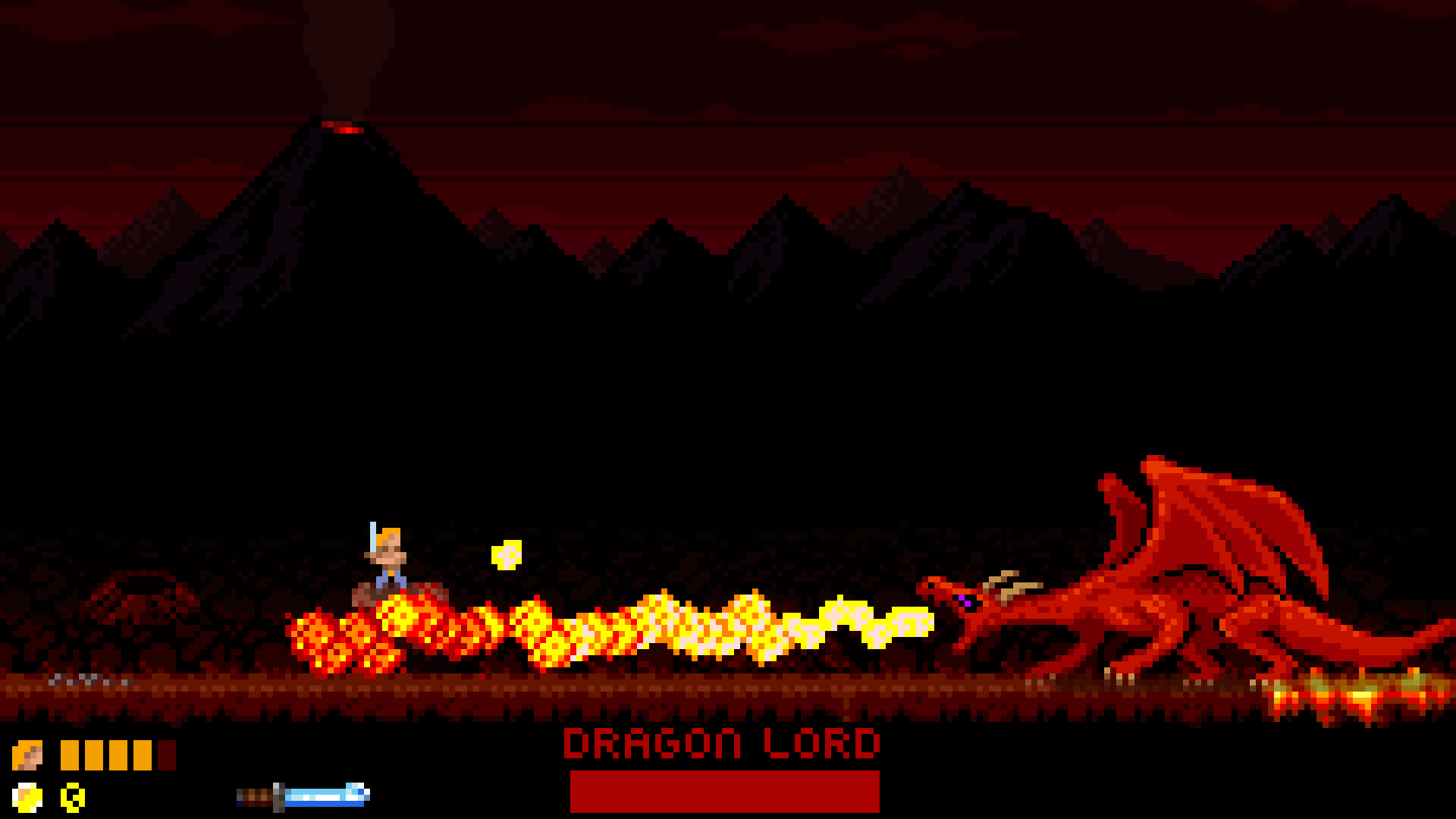 Graphically, Thy Sword is a retro 8 bit title, it doesn’t look great on a big screen. The inhabitants are very blocky on quite bland backgrounds. Your character doesn’t do much better. The bosses on the other hand have somewhat more character to them, it’s just a shame that their tactics are pretty one note. Musically Thy Sword replicates what you would expect from a nostalgic game. The hacking and slashing controls can take a little getting used to. There is a special move you can do which you’ll need against a certain opponent to defeat them, it will take you a few goes to find the correct distance to use it properly.

Thy Sword is a fun little hack and slash platformer. The graphics may put a lot of people off but generally Thy Sword does have a few things going well for it whether it’s the replayability due to the unlockable characters or randomly generated levels. The biggest issue with Thy Sword is that whilst it’s fun it’s quite short and it’s unlikely you’ll go and play through it again even with a different character. If you enjoy hack and slash nostalgic platformers then Thy Sword should have a place in your collection, if you’re into more modern games then Thy Sword just lacks wow factor to entice you in.

If you enjoy hack and slash nostalgic platformers then Thy Sword should have a place in your collection, if you’re into more modern games then Thy Sword just lacks wow factor to entice you in.