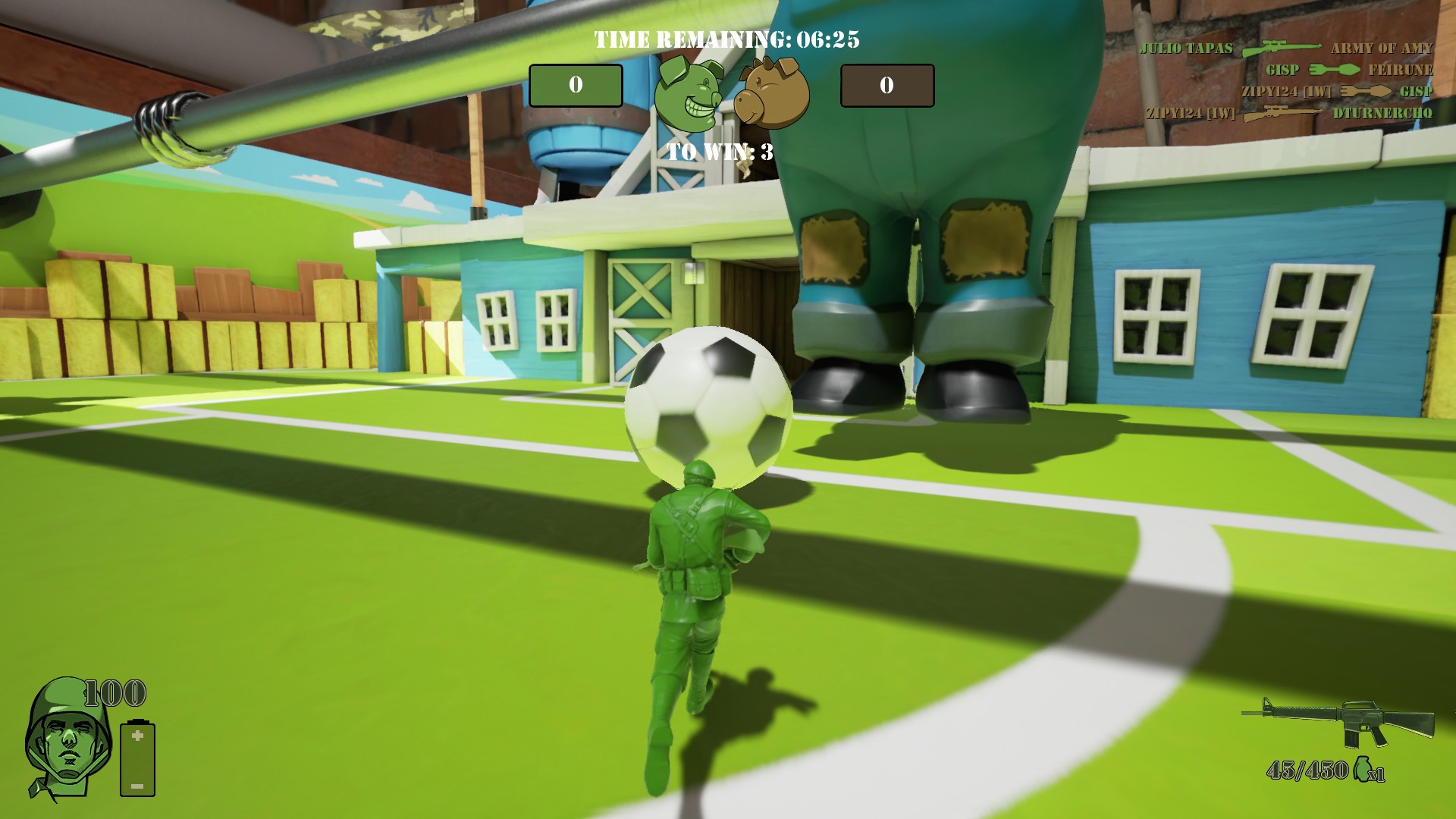 If you ever watched Toy Story as a kid or read The Indian in the Cupboard, you probably spent some time imagining your toys coming to life and the kind of tiny adventures they’d have running around your bedroom. Little green soldiers were about as iconic as a toy comes and I’d spend hours creating missions for them to complete and elaborate battlefields for them to fight on. Because I grew up with these wonderful toys, I was more than a little excited to get my hands on a copy of The Mean Greens – Plastic Warfare, a shooter about the small and exciting world of plastic toys. Unfortunately, while it looks great, Plastic Warfare doesn’t exactly live up to the memories of my childhood.

Plastic Warfare is a 3rd person multiplayer shooter in which you play as a plastic soldier from either the green army or the tan army. Using a variety of weapons, vehicles, and environmental hazards, you and your team will need to complete a number of different objectives in order to be declared victorious. Objectives range from capturing command points atop a moving train, defending areas from attacking forces, or even forcing a bathtub to collect flags. There’s actually a pretty decent number of unique objectives which keep things interesting for a while, but after playing through each objective once, you’ll learn all the tricks or secrets you’ll ever need. 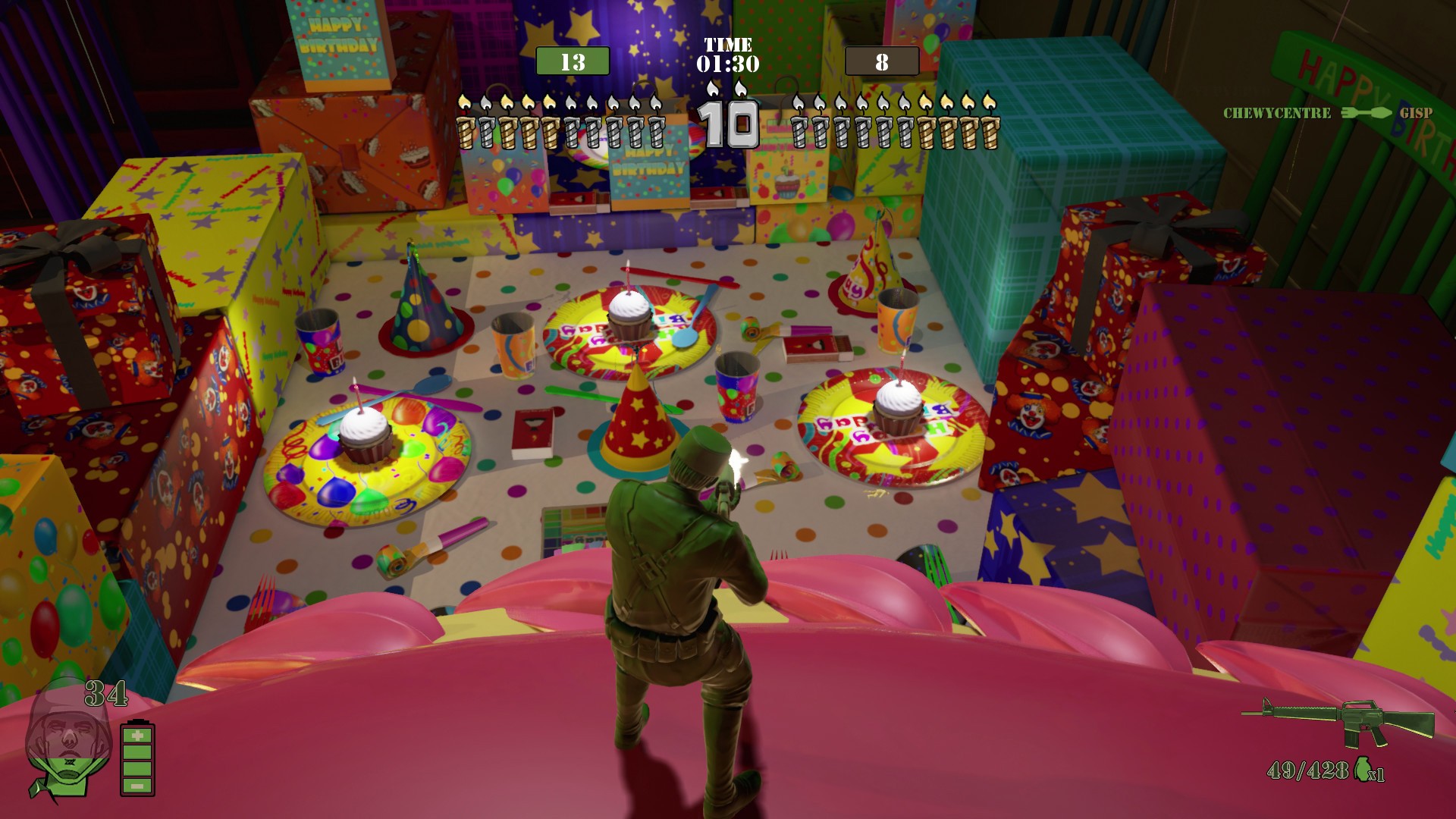 For a 3rd person shooter, the combat in Plastic Warfare is incredibly lacklustre. You have a selection of guns to pick from including a rifle, rocket launcher, flamethrower, and shotgun, but none of these feel particularly unique. Whether you’re launching a missile at a group of enemy combatants or just firing down your scope at one unlucky target, none of your weapons feel as though they have much power behind them and they do very little damage even when used perfectly. I sometimes found it difficult to tell if my weapon was even firing, let alone hitting my target.

Despite its less-than-stellar gameplay, Plastic Warfare is visually attractive. It truly is exciting to explore a cluttered dining room table or a model train circling the Christmas tree from the perspective of an inch high soldier. A lot of effort went into the level design with every day objects being used as obstacles and hazards. Molds of jello can be bounced on while crushed soda cans can be made into the perfect cover. The models are high quality and very detailed and the lighting reflects on the smooth surface of your toy soldier just like it would real life plastic. 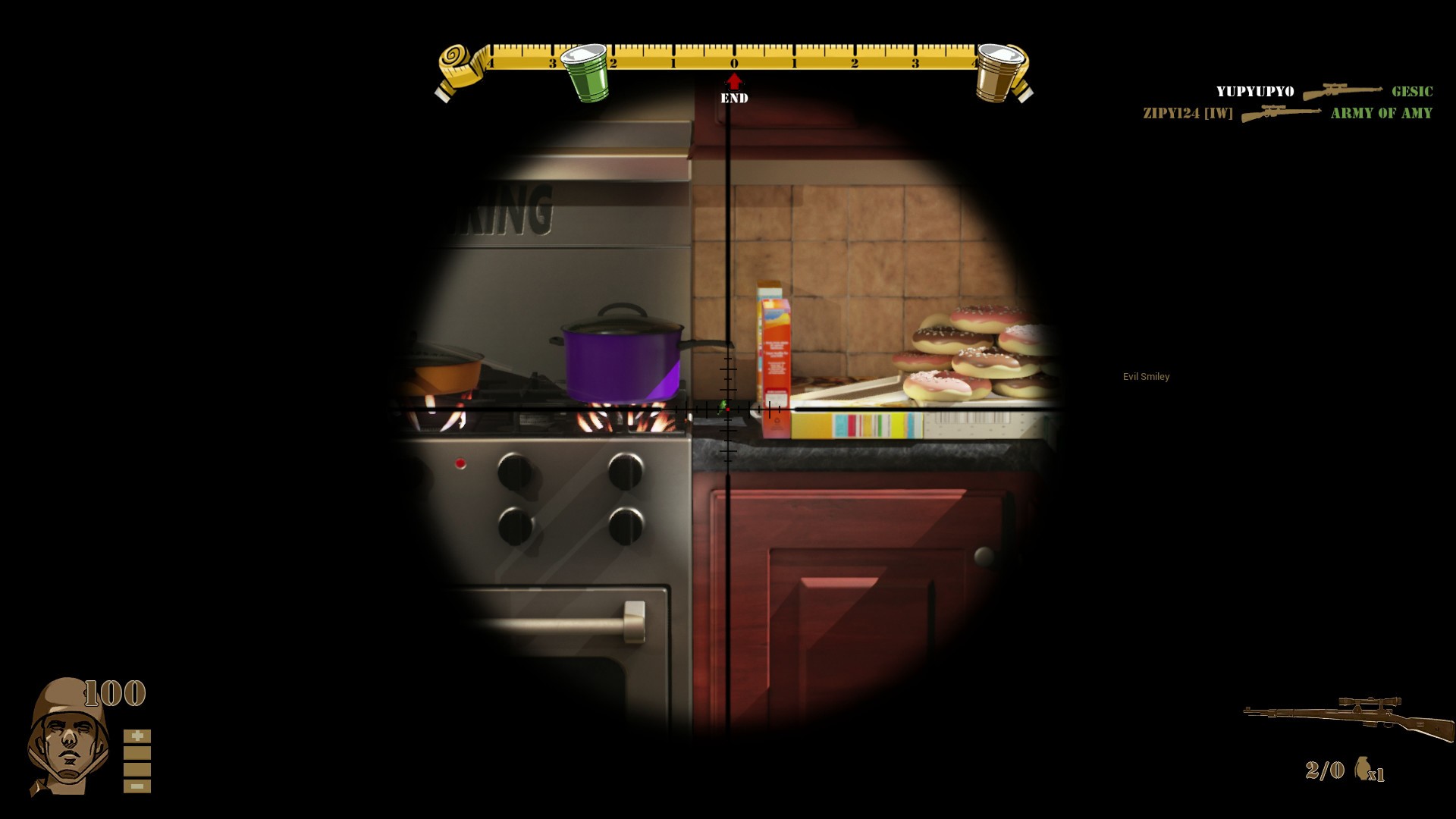 Plastic Warfare is at its best when playing with friends. Multiplayer matches can host up to ten people, and there’s even an option to make custom matches. Several maps and multiple game modes mean that there’s quite a bit more content when customizing your games than when just playing the default matches. Unfortunately, playing against others can frustrate too when enemies blend in so well with their surroundings.

The Mean Greens – Plastic Warfare leaves a lot to be desired in the gameplay department. Boring weapons that feel the same, enemies that are difficult to see among the terrain, and only a few unique gameplay situations means that Plastic Warfare probably won’t provide you with the hours and hours of fun that you used to get out of real plastic soldiers. Still, the creative level design gives the game a unique aesthetic and makes the player feel only a few inches tall, which can be a lot of fun when exploring beneath a Christmas tree or the edges of a bathtub. Plastic Warfare has a lot of potential, but simply doesn’t live up to the iconic toys it’s based on.

The creative level design gives the game a unique aesthetic and makes the player feel only a few inches tall which can be a lot of fun when exploring beneath a Christmas tree or the edges of a bathtub.