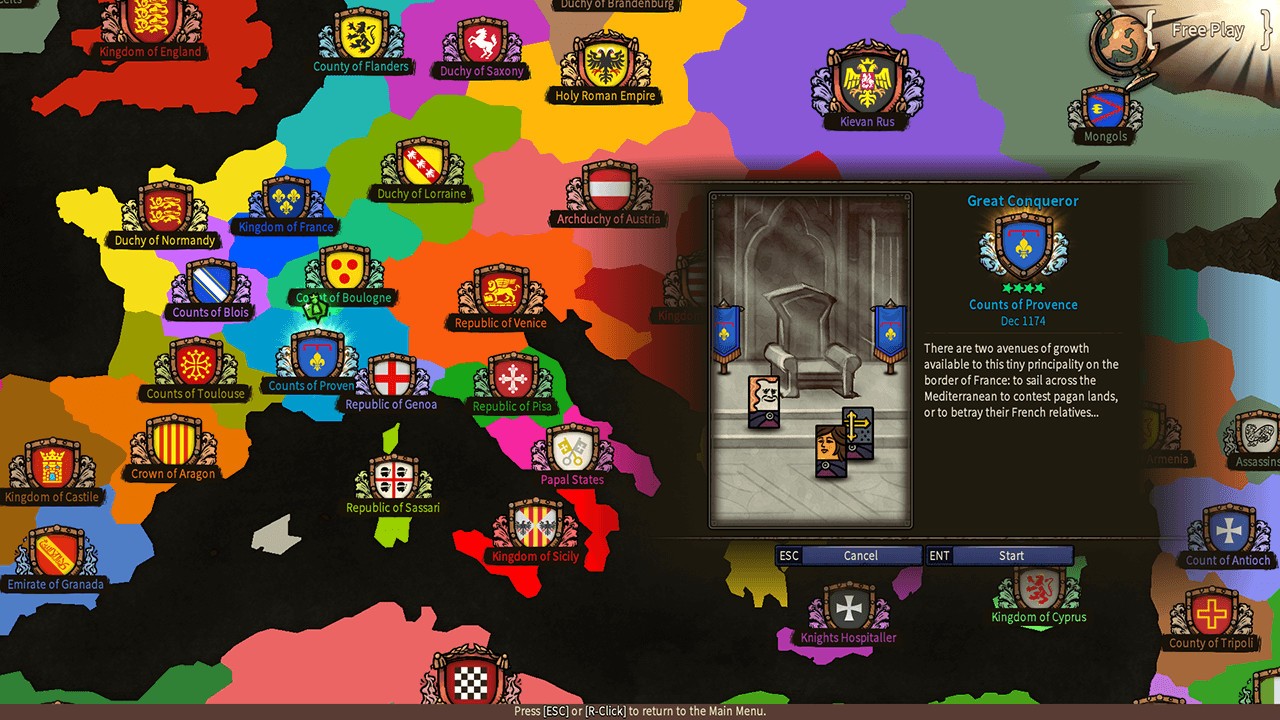 Plebby Quest: The Crusades is a turn-based strategy game which, if it wasn’t obvious given its name, takes us back to the period of the Crusades, but instead of assuming a serious tone like the Crusader Kings series, Plebby Quest has opted for a more cheerful approach. This is most evident not only thanks to the game’s charming artwork, but also thanks to its comical dialogue, but the gameplay itself also reflects this aspect thanks to a series of mini-games.

Plebby Quest features both a Free Play mode and three different scenarios which players can delve into. Scenarios have a pretty present narrative element, as characters engage in dialogue as you progress through the scenario by completing quests. However, these feel more like a glorified tutorial system, but a good one at that. Each scenario takes place in different regions, with the first taking place in the Middle East, the second one focusing on the Mediterranean, and the last scenario taking place in most of Europe. Just to give you an idea of what to expect, in the first scenario you’ll be put in charge of the Sultanate of Rum, as Kilij Arslan II, near half a century after the First Crusade reached Jerusalem, as you embark on a journey to restore the glory of your kingdom. Meanwhile, the second scenario puts you on the shoes of Roger II, ruler of Sicily, as you attempt to rescue your kingdom out of crippling debt. While the gameplay is exactly the same in all these scenarios, the context in which you find yourself in changes tremendously, and so you have to adjust your gameplay accordingly.

With that said, the Free Play mode is where you’re most likely to spend most of your time on if you don’t end up getting tired of the game once you reach that point. I say that because, while the game is quite enjoyable at first, it can certainly start to feel repetitive as the gameplay loop is pretty short and doesn’t really vary that much. Still, you can decide the size of the world map when playing in this mode, you can choose to only play in the Middle East, in Europe, in the Mediterranean, or even in all the regions combined. Obviously, depending what zone you pick, you also get a set of kingdoms and rulers that you can choose to play as, so there is certainly quite a bit of replayability if you get really hooked into the game. 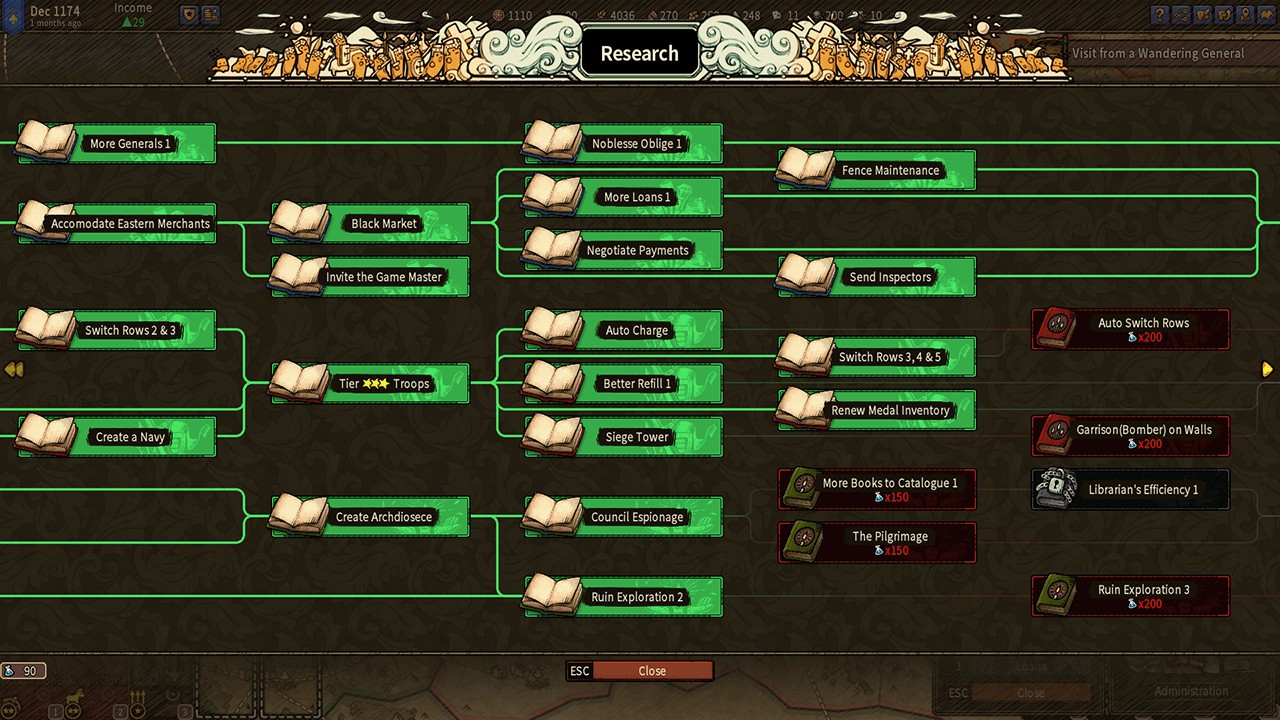 Now, if you’ve played other strategy games like Civilization, or Paradox titles such as Crusader Kings, Europa Universalis, and so on, then you should expect Plebby Quest to feel very similar in terms of its most basic premise. The goal of the game is to simply expand your kingdom and achieve victory over all others, by waging war, making alliances, backstabbing, and trading. However, this is where Plebby Quest sets itself apart from others in the genre, by oversimplifying things.

Instead of controlling individual units, you get to control different generals, and each of them can have their own small army which can increase in size as they level up. Generals are the main characters that you control in the world map, and they pretty much do everything you can and must do in order to succeed in each scenario. Each general has to train and develop its own individual army, which you’ll be able to use to fight off invaders, wage war, and battle ruffians. Furthermore, they’re limited to one action per turn, and it so happens they’re not only used for war, but also to farm resources.

One of the cool things about Plebby Quest: The Crusades is that every single gameplay element takes on the shape of some sort of mini-game. For instance, to get research points that you can use to acquire new technologies you must play a game of match 3 by stacking books of the same colour on top of each other. Meanwhile, you can also donate to charity and get some items in return by doing the equivalent of flipping coins. There are 9 different types of resources in Plebby Quest: research points, gold, wheat, war horses, wood, sugar, diamonds, pagan prisoners, and holy relics. Each of them has its own unique purpose, whether that be training and upgrading certain unit types, building roads to connect cities, recruiting units and generals, allowing your troops to rest and recover, or even providing prisoners as labour or sacrifices for your religion.

Much like resource gathering, combat, which takes place in a 2D lane, also follows the same trend, as the whole thing boils down to a simple game of telling your units when to advance or retreat. There isn’t really much depth to the combat as far as direct player input goes. Still, thanks to base unit types like infantry, archers, and cavalry, combat in Plebby Quest almost takes the form of a game of rock, paper, scissors, as different unit types tend to be effective against other unit types. For example, some infantry might not be effective in dealing damage to cavalry, but they can hold against their charge ability quite effectively, which would otherwise cripple an army formation by simply charging into them. Be that as it may, while victory or defeat in combat can mean losing or gaining ground in the world map, your troops never die, even if they end up having their health completely obliterated in combat. Instead, all they need is some good rest to get back to good shape, which means that any experience gained in combat doesn’t go to waste. 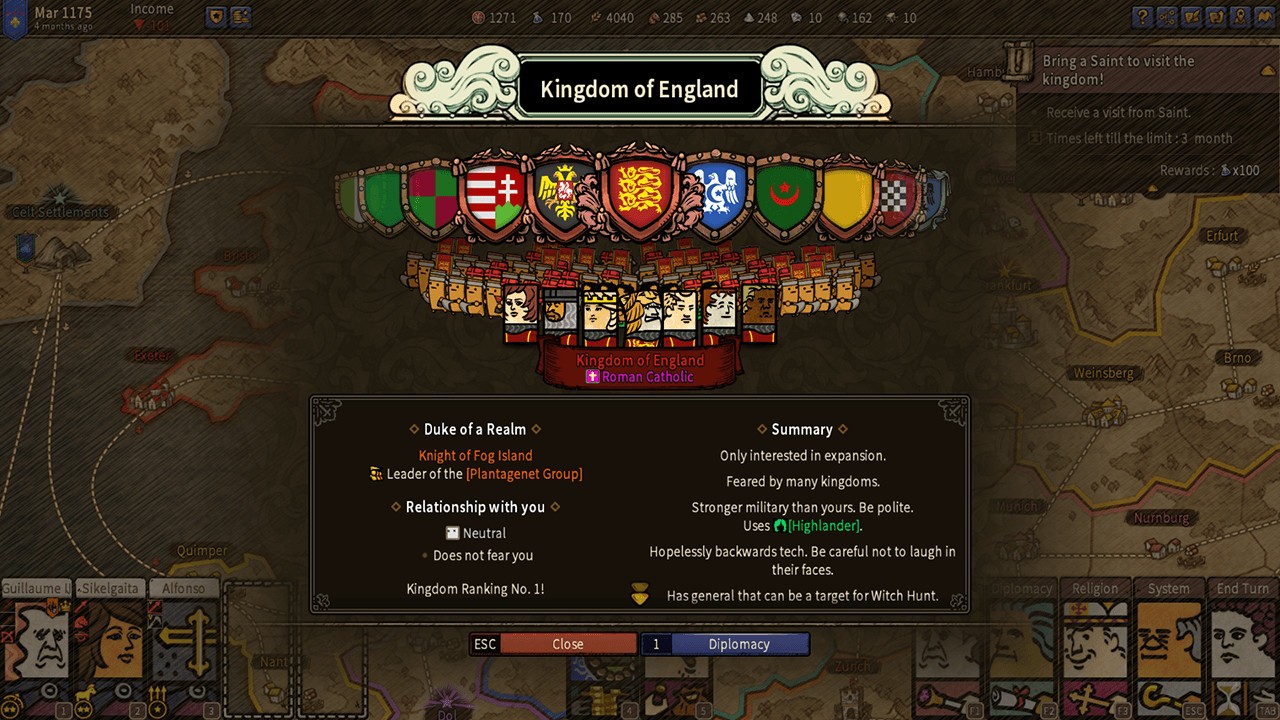 Depending on your actions towards other kingdoms, your relationship with them and with the Church will also be affected. This can be seen through the Diplomacy screen, where you can check how each kingdom feels about you, if they fear you or respect you, and you can also send out liaisons and ambassadors, propose trade deals or military alliances, offer gifts or even demand tribute and declare war. Diplomacy is certainly an effective way to hold off another kingdom while you’re busy dealing with one neighbour so that you can just take your time and backstab your allies once you don’t have anything else to worry about.

Ultimately, despite everything that Plebby Quest has going on for it, the overall experience does tend to get quite repetitive pretty fast. While I’ve enjoyed the dialogue and the way it’s presented through the quest system in scenario mode, I feel like the gameplay loop that you have to go through in order to make it towards the end isn’t that rewarding or fulfilling. This is certainly not a bad game, but perhaps it’s one of those titles that is fun for a couple of hours and then you’ll put it aside and tell yourself that you’ll come back to it later and you’ll actually never return.

Despite the fact Plebby Quest’s gameplay loop is quite simple and easy to understand, and even though I’m sure some people might find it repetitive, it certainly has that addictive just one more turn feel to it. I’d start playing it, only intending to do so for a few minutes since this is a very friendly game to play for short amounts of time, but, next thing I know, two hours have gone by. If you’re into the sort of strategy games of the likes of Crusader Kings but want something more relaxing, something which doesn’t only deserve merit for its gameplay, but also for its unique looks and humorous characters, then Plebby Quest: The Crusades might just be the game for you. However, if you’re looking for an in-depth strategy game, then this isn’t really what you’re looking for.

Plebby Quest: The Crusades is a turn-based strategy game with some interesting ideas, but due to its oversimplification of the genre, it ends up getting repetitive quite fast.