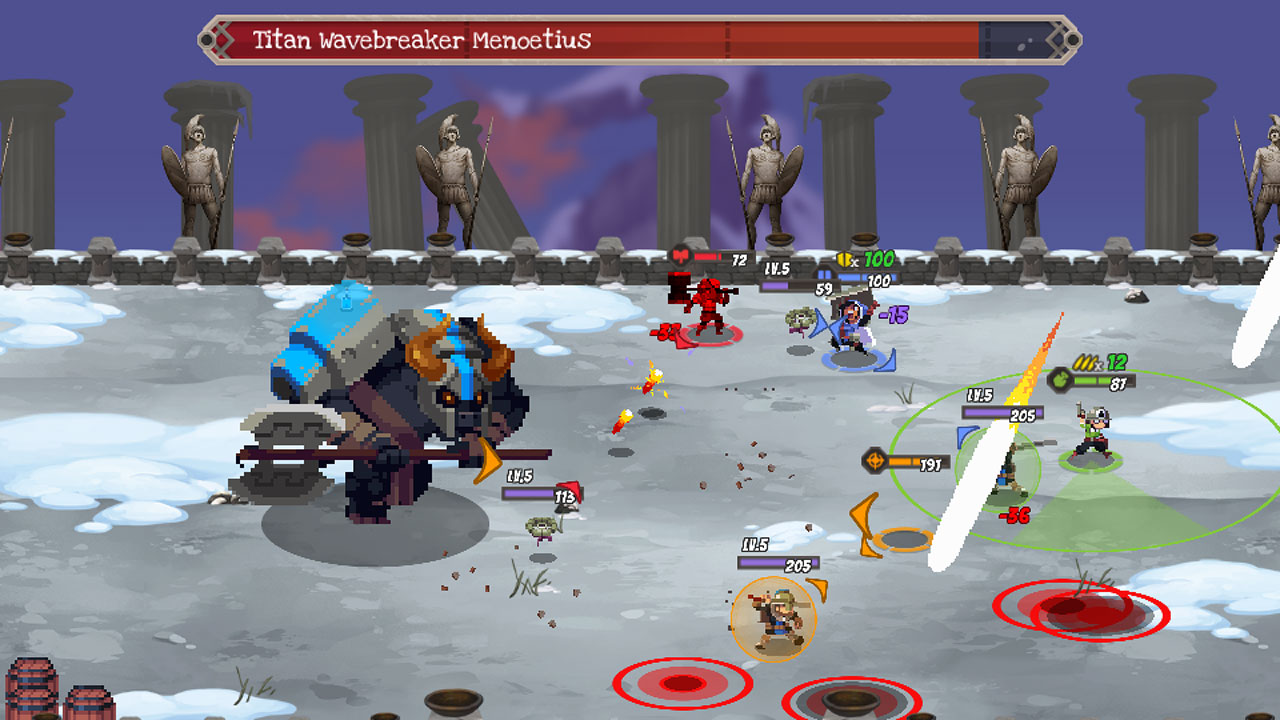 There are few greater pools to gather characters and ideas from than the Greek and Roman mythological stories. Once the setting of religions for some of the most powerful empires in ancient times, the gods, demigods, monsters and mystics of Europe’s past make for some fascinating reads, both in their original forms and in modern adaptations. The Percy Jackson series proved that injecting some modern takes on the older beliefs make for excellent young adult novels and positively ghastly movies. Clash of the Titans is a truly epic movie, and even mediocre releases like Troy have positive things within (besides an oiled Brad Pitt). Gaming is hardly the last frontier, as games like Titan Quest and the recent retro puzzler Lil’ Medusa will show. But when you truly put some unique spins on things – like giving sniper rifles to mythical entities – you can really grab the attention of almost any audience.

Full Metal Furies is the latest release from Cellar Door Games, and it’s a doozy of a background story. Snatching random elements from the Greek side of mythology, we’re in a semi-modern time in which Prometheus, king of Man, has been slain, and the Titans have waged war against the opposing forces for a century. Now, the Titans have relented long enough to gather more troops, and it’s grimly apparent that mankind won’t survive another onslaught. Thankfully, they have some champions of their own: The Furies, Greek’s answer to angels of vengeance, and the Furies are far, far too angry to let civilization go quietly. Armed to the teeth with weapons, technology, and amazing deadpan humor, these four goddesses are poised to find out the full extent of the Titan’s plans and “disrupt” them with extreme prejudice.

It’s interesting and important to note that, even if you hadn’t heard of it before, Full Metal Furies is a double dose of unexpected. Firstly, if you’ve played Rogue Legacy, this is totally, completely and spectacularly different. There’s nothing procedurally generated, death should not be expected, and the approach is wholly different. Moreover, even if you’ve glanced at the game cover and taken in a bit from the blurb that’s on Steam or the Nintendo website, let me assure you that Cellar Door Games is purposely and explicitly keeping the biggest parts of the game under wraps, and I’m here to take off as much as I can without fully exposing the game and ruining it for everyone. If you’re truly looking to go into the game completely blind, you’ll find some really great gameplay and exciting ideas, but it’s some of the stuff that’s just below the surface that really makes the title shine. 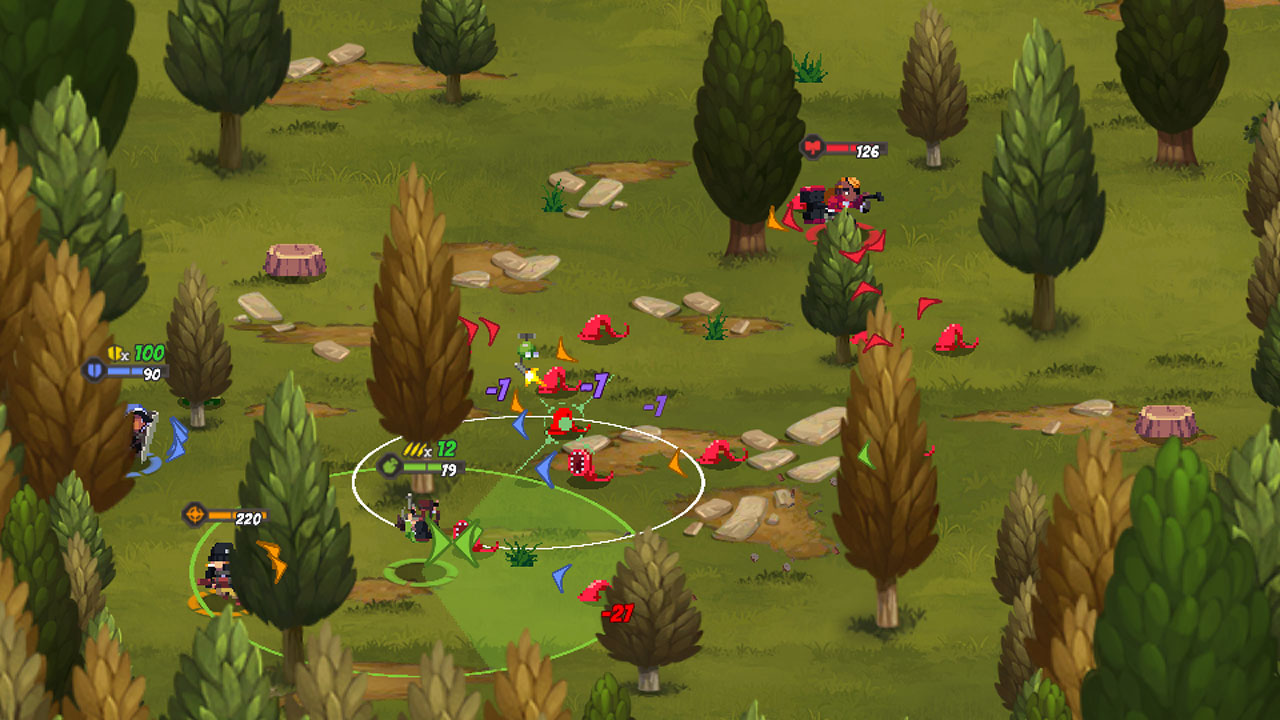 Full Metal Furies is set up as a tactical action/adventure game that’s best played in a multiplayer setting. Cellar Door Games has made every accommodation to create a great experience for many friends coming together. You can use a single JoyCon, a Pro Controller, or 3rd party controllers (with the right adapters, of course). You can play it locally, or you can play it wirelessly with other Switches, or you can even play it online for friends across the globe. The reason is that this is a squad based game, and you seriously and truly want someone else in at least one other seat (and I hope you have three other friends for the best case scenario). If you go at this solo, it’s plausible: the game makes allocations and allows you to swap between characters with a single button press, and there are parts where I was glad to rely on myself instead of someone else to get the job done. However, to really help with some of the difficult challenges and intense combat, more people are better. This is really driven home within the first few seconds when enemies appear and can only be damaged by a certain party member, making you swap like crazy in order to break down shields and get the general damage in. You’ve got a fighter, a tank, an engineer and a sniper, and I’ll throw down right now and say Alex and Erin are the best two person team you could hope for. Alex has a dope hammer and smacks the hell out of everything, and Erin’s got a short ranged pistol and can set up drones to murder bad guys in the face.

As you move through the game, each stage has a series of interactions in which the Furies are forced to ultimately do battle with a fistful of grunts and shock troops before reaching either a mini boss or a full-fledged boss at the end. The beauty of the combat is really something to behold once you get it down to an art. Your basic attack gets a lot of the ugliness done, but your evade can severely help you and might even turn the tides when you do it correctly. Additionally, you’ll have some extra attacks that have a cool down meter that can completely reverse the situation in battle when done correctly. For example, if you use Meg the Sniper’s bullet time shot at the right moment, you can fully interrupt a massive damage wave heading your way and save your butt. Bosses will also change colors and decide they only want to be hurt by certain people, and there’s always a chance they’ll throw up a clear shield and be impervious to damage as long as they’d like. In these cases, you need to stay alive, a task that gets shockingly difficult in a short amount of time. If you die (which someone always does), your character will naturally revive after a while, provided at least one other person is still kicking in battle. Other characters can step in and help you revive faster, but that usually opens up their flanks to being killed themselves.

The combat is simply lovely when you have a bunch of people around, and I think Full Metal Furies shines as a gorgeous example of real-time strategy in a tactical light with some clever implementation. You can power up the Furies between fights by increasing their stats, building new equipment, and tempering their characters to being more active in battle, and they really do learn and play off each other strengths. The reason that Triss is a tank is because she can work to absorb a lot of damage and clear the room when things get too muddled. Meg can pick off some truly cheap (but good) shots from a safe distance, and Alex adores getting into the thick of things, spinning around with her hammer and sweeping the floor. It’s like the ultimate in cooperation and really showing what it means to be a Fury, completely drenched in the blood of battle and grinning like a goddamn psychopath. 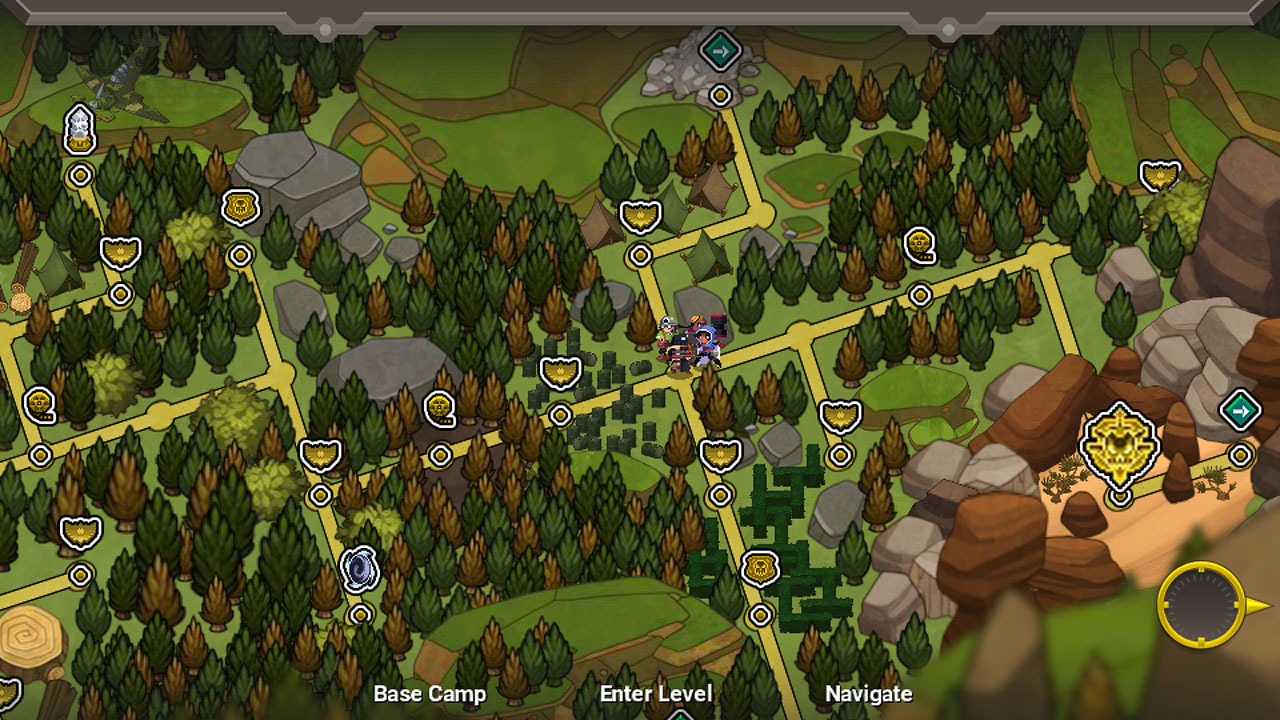 If all there was to this game was the combat, that’d be enough. But Cellar Door has gone out of their way to make some puzzles that are fiendishly clever and wonderfully executed. There are clues scattered throughout the maps, and you won’t find all of them simply going in a straight direction to the ending: far from it, you’ll need to think and rethink things as often as you can. The hints are purposely vague and set in poem form, and you’ll need to look for hints dropped by the characters themselves as to how their roles and their ideas can play into solving them. There’s something marvellous about the very first puzzle, in that, if you were to make a mistake from the second you pick up your controller, you might stumble onto it before knowing what was going on. This might sound quite vague, and that’s on purpose: I sincerely don’t want to spoil the fun of puzzle hunting. Just know that the execution for how to get some of the clues are a bit convoluted and require serious out-of-the-box thinking. Additionally, one of the puzzles is currently a bit hard to do unless you’re playing in handheld mode, and that’s already been addressed and will be fixed in a day one patch.

The puzzles, the combat and the storyline all hinge on the fantastic dialogue and comedic elements of the game, which are properly paced and set out. The very beginning of Full Metal Furies is a tad ridiculous, including the “departure” of Go-Cat (who mercifully reruns in the near future and stays with a vengeance). Everyone has their own tropes and personalities, from Alex’s overly zealous, cheerful and borderline naive approach to things to Meg’s short, gruff and often hilarious quips. As the story opens up more, however, and we see some of the deeper details of the Titans’ War and what happened before, you get a more complex picture of the world and the heroines, which only makes the comic departures all the more sincerely funny. It’s a great balance where we almost teeter into hammy slapstick but then bring it back with some real storytelling moments.

I hope that Cellar Door Games and players in general look at the Nintendo Switch as a second chance for Full Metal Furies to be embraced the way it was supposed to be. Incredibly fluid and well designed, this game combines the best of action, co-op strategy, and surprise storytelling in the guise of puzzles and banter. Viewing it as single player vessel makes it difficult to fully appreciate and articulate how well things come together, but, with all the options for multiplayer, it should be easy to find a way to bring your party together. With a little time and some good promotion, Full Metal Furies has the potential to be the sleeper hit that keeps people warm and excited for indie titles on the Switch.