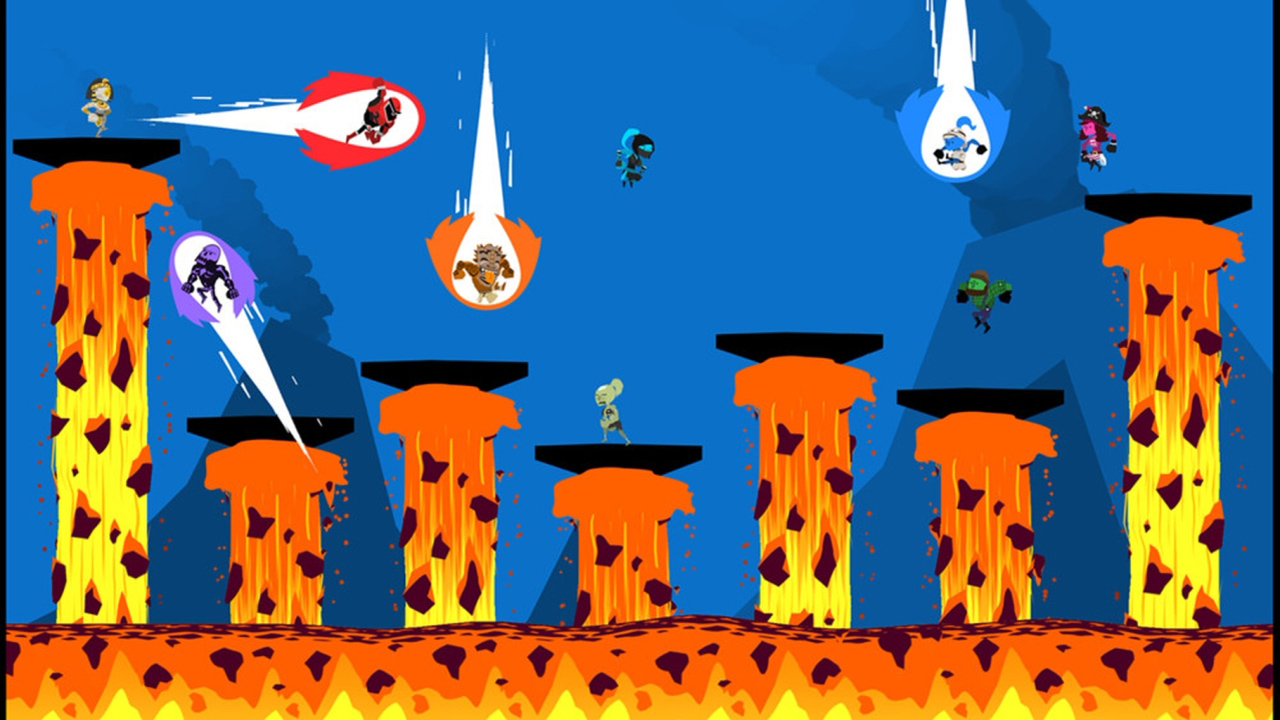 Too often, it becomes easy and almost reflexive to dismiss a game that makes its foundation on multiplayer. After all, many fans are quick to point out how the FPS market has fallen due to the big companies relying on online deathmatches and modes to cover up the lack of single player support or any campaign whatsoever. But, for a game to start out as a multiplayer idea and stick to that, it makes a bit of sense. And then for that game to flush out and add a bunch of extra material for local and, dare I say it, single player modes…well, that’s just delightful. So here we are, nearly three years after I first got my view of Runbow, and now it’s about to drop on the Nintendo Switch.

Runbow, for those who don’t know, is a multiplayer competitive game that works with three important factors: colors, players and dickery. You play one of several characters who compete in a series of races: sometimes they’re just to get to a trophy, sometimes it’s more of a “King of the Hill” situation, but, in all cases, it’s one winner, and the rest are losers. You get to the other side of the map through the aforementioned colors and dickery. You see, the ever-changing background will suddenly swap to a different color, which will directly affect the environment around you. Green platforms will vanish when you smash cut to a green landscape, but now those orange platforms are back…as well as a pink wall in front of you. That pink wall wasn’t there when your friend ran through a minute ago, and now he’s definitely going to win. Dammit. But wait! You can use some great powerups to grab him or her, hurl them around the stage, and maybe just jet straight past them and claim the trophy. Huzzah! Like Mario Kart or Powerstone, randomized elements can and will completely change the outcome of the match, and your friends will claim it’s skill but, really, a lot of it is just luck.

The attitude and persona of Runbow is what really makes it work. Take, for example, the fact that you can start the run as one of several colorful people (male and female avatars alike available from the beginning). Your character choice is now you, and you gotta inject that in and get to the finish. When someone grabs that trophy or is the last one standing, the game applauds you and actively helps you mock the fallen. If, by some chance, everyone dies or loses, the game mocks all of you in some snippy, single-sentence sarcasm. It’s wonderful to get into a match because, even with two people, it feels like there’s a third player who isn’t participating but is impartial and seriously catty. This is a game that is meant to be enjoyed by a ton of folks and so it shall be. You can pick up the controls almost instantly: run, jump, and a kind of smashing punch/dash that acts as both an offensive move and a last-ditch jump when you need an extra inch to live. If you have friends who can move their thumbs, you have friends who can play this game. 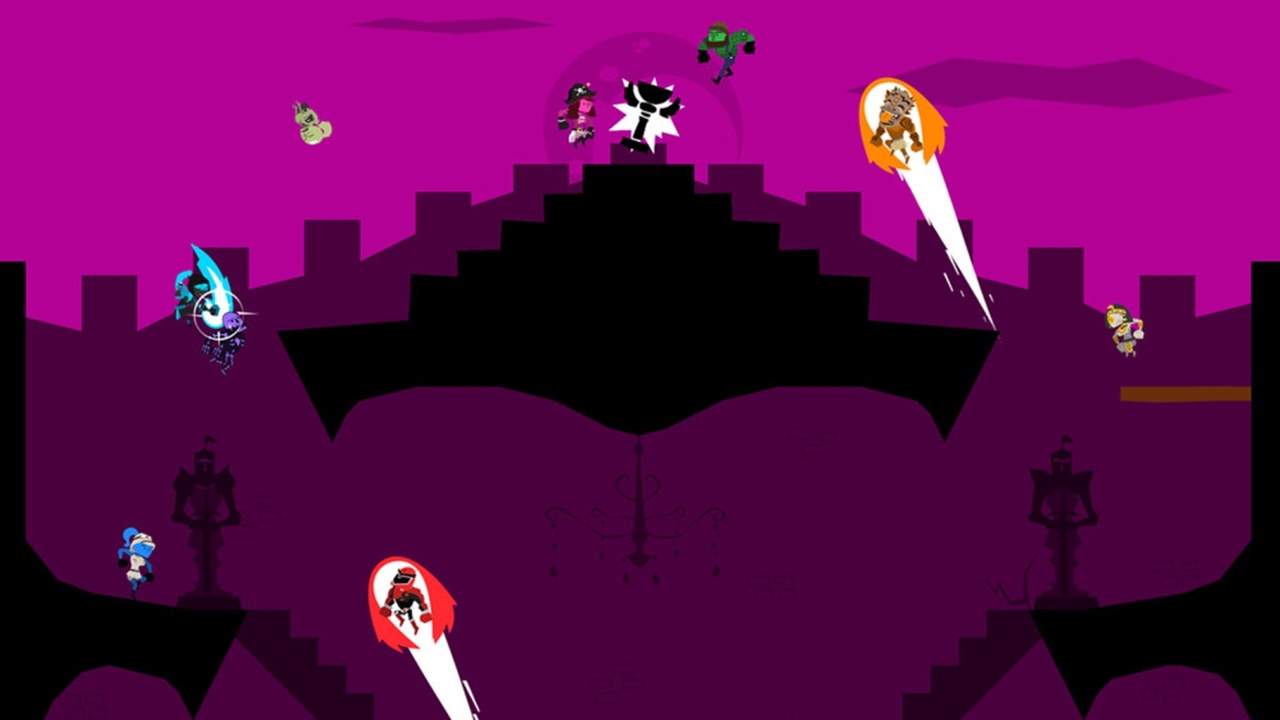 And you want friends to get in on this. Runbow is one of those mammoth titles that supports EIGHT players at once for multiplayer, and it’s pure havoc. You know how, with Smash Bros, you can sometimes find it difficult to keep track of yourself even though you’re a small, electric mouse and everyone else is humanoid? Now imagine that there’s eight of you and, at first, the only difference is a slight color deviation. Yea, that kind of pandemonium. But it’s almost more fun that way because you get totally caught up on the mix. When you start cursing that the green player just knocked you into a pit, you forget for a moment that your mom is green and now you have a lot of apologizing to do after the game. Players live for these moments where your joy is only amplified by the frustration and anger of your cohabitants. I don’t know if it’s smart to play these kinds of games with people who know when you’re sleeping. Maybe invite people over and make sure they leave at the end of the night.

Additionally, you have two single player modes, and the first one, Adventure, doesn’t even need to be done alone. You can grab a couple friends and go through the different posters and the immense 140 levels that come baked into the initial mode. I recommend doing this when you get a chance: it might be a huge task to undertake, but a.) it can go really fast and b.) you can unlock some great extra characters and secrets by playing it through. The levels, while somewhat challenging, aren’t anything that you need to stress about and, honestly, can be banged out in an afternoon. Just get a six pack of Pitch Black and some dedicated friends and it’ll be easy.

The second mode, Bowhemoth, is a different thing entirely. You get swallowed by a giant monster, you have no save points or continues, and each and every second is pure hell. These shifting landscapes and murderous moments are meant to frustrate you into screaming and giving up, which I can attest I did several times. If you’re fortuitous enough to grin and bear it and actually go through things slow, you’ll find it’s not so bad: there are patterns and practices to follow, and, after you die a couple times, you learn what the game expects of you. Additionally, there are even more characters to unlock here, and I love unlocking guest stars from other indie games to come and play. You get Shantae and Sash (from Freedom Planet) right from the beginning, and being able to play as Shovel Knight, Rusty or Commander Video will always bring a smile to my face. So if your friends go home for the night and you wanna up your skills, don’t just play empty matches against yourself: challenge the Bowhemoth! 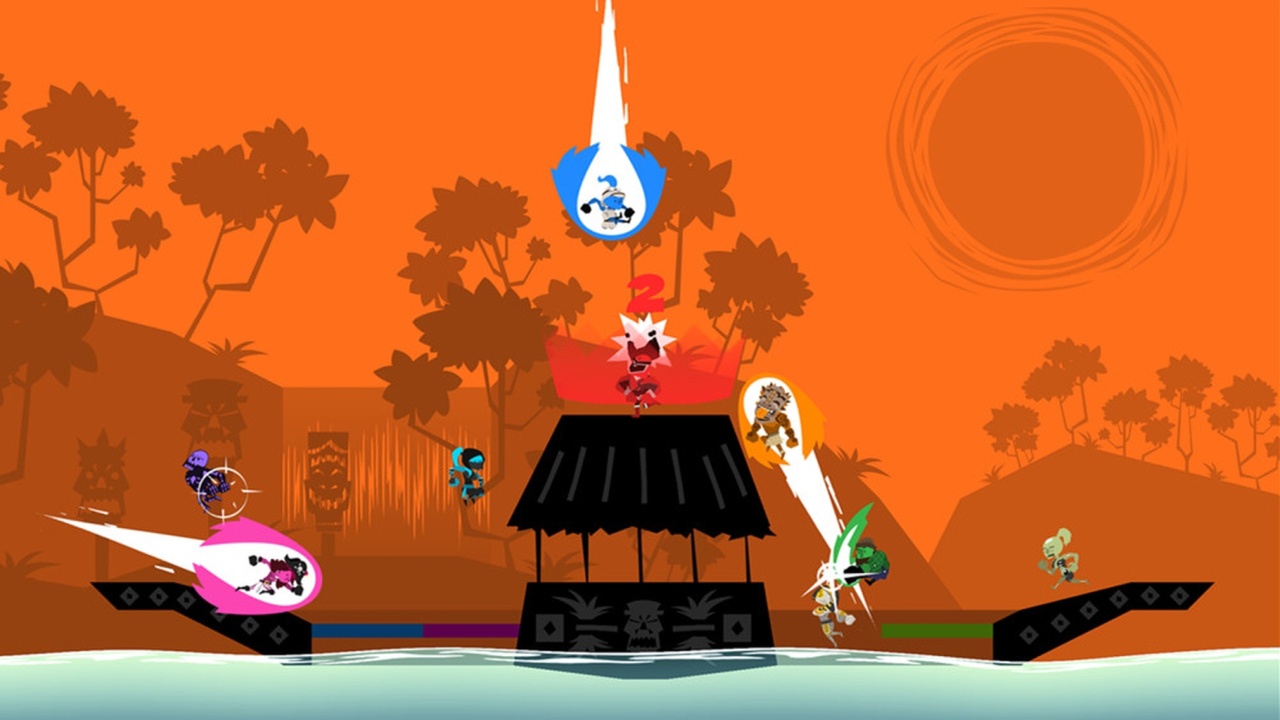 At the time of this writing, the game hasn’t yet “gone live,” so I’m not sure exactly the full scope of the online arena, but the theory is nine players can get in on things all at once. Additionally, sadly, I don’t believe Runbow is yet cross platform, which is a bit of a shame. I understand why, but Runbow, at this point, has players on nearly every console and even a couple handhelds. This is a game that seems universal enough to enjoy anywhere, but I understand that players aren’t totally down with double dipping on games, especially if they’ve put a ton of time and effort into unlocking all the extra characters and secrets and such. However, the devs haven’t totally closed the door on the concept, and I’m sure they’d at least love the other consoles to come out and play, so fingers crossed for Switch owners to be able to run with everyone else.

But even if this doesn’t come to pass, Runbow is still one of the best incarnations of a fun, simple party game that then gets amped up way past eleven with havoc, colorful mayhem and an experience that works in groups or online (I”ve had the pleasure of playing on the WiiU). The Switch has already proven itself to be a successful environment for multiplayer games, and the possibility of this being portable in a way the 3DS port couldn’t touch is even sweeter. It’s got a lot of heart, tons of replay, and some decent DLC if you don’t buy the physical deluxe version (which I totally recommend doing). In short, Runbow is the epitome of what a Nindie is, and I’m glad that 13AMGames keeps bringing their great titles back around to the Switch.