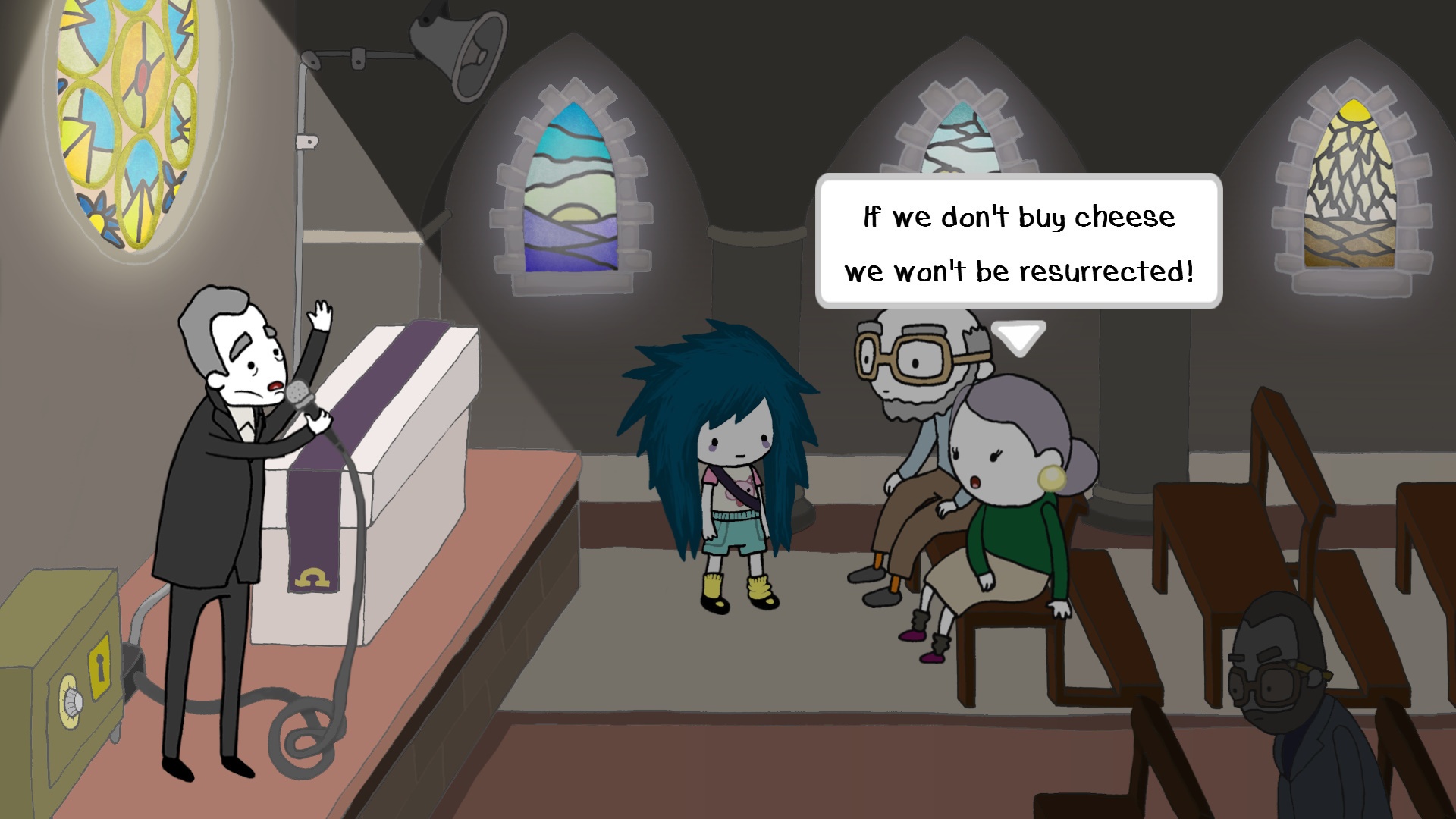 Within the first 20 minutes of playing Agatha Knife, I had learned about a religion based on a Time Lord who rewards you with threats and through whom salvation is bought via cheese, met a prostitute trio, one of whom had recently married for money, and conspired to create a made up religion in such a way that dissed all organized religions by revealing them to be business models that prey on the fearful.

From that moment, I knew this provocative title would be something special.

The premise of Agatha Knife is a strange one–rescue your family butcher business by creating a false religion that will bring in animals that are willing to be killed without fear of the titular protagonist–and so when I say that the events leading up to that moment are stranger still, you know that they’re, well, strange.

.So You Want to Make Your Own Religion?.

A God.
A sacred text.
A sanctuary.
A martyr.

These are the components of a religion and with the help of your mentor, a man called Awesome Sandro, you must find or create these things in order to make the “perfect lie.”

But is there more truth to this lie than your mentor would have you believe?

The game takes place in Agatha’s hometown, which is divided into streets. There is a single off-site area that can be accessed via bus, but for the most part you’ll be familiarizing yourself with the businesses in town.

You’ll meet several quirky characters including an angry, sandwich-eating construction worker, a skirt-wearing male wrestler, a Mighty Morphin Megazord (cosplayer)– and more, but a lot of these quirky characters won’t be essential to the plot. Still, it’s fun to see what they have to say and their limited response pools broaden periodically in correlation with what task Agatha is trying to perform.

Agatha herself will look directly towards the screen and talk to you, breaking the fourth wall and also immersing you in the inane events that unfold. You become her conspirator, the person who understands her best because you’re along for the ride. 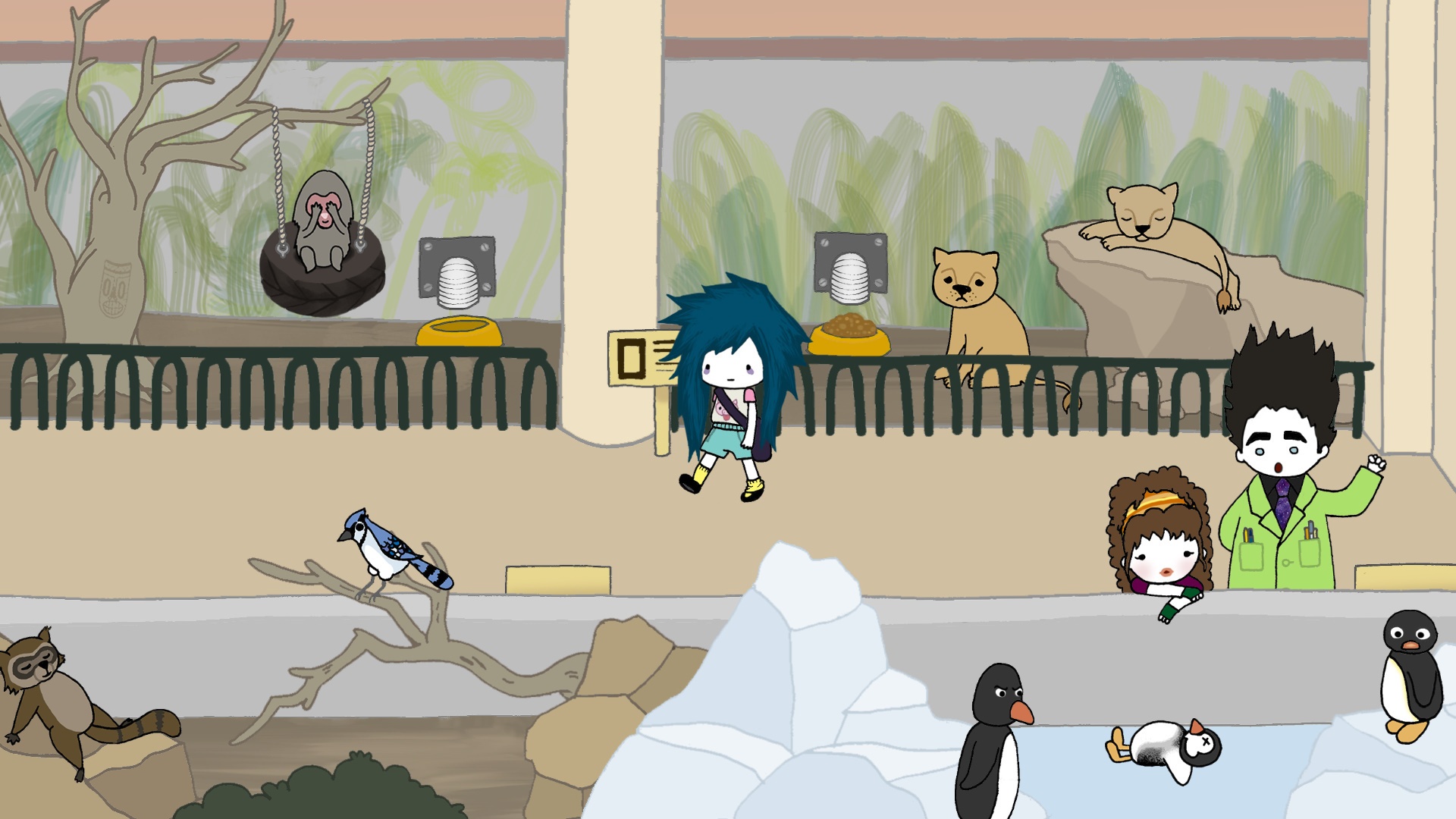 While the story is one of the more interesting ones I’ve encountered to date, Agatha Knife’s gameplay is quite slow paced. You’ll spend a lot of time walking from one location to another because unlike other point and click adventures — like, say, Broken Age — you cannot skip or fast forward through animations or character encounters.
You do have the option to have Sandro teleport you back to the butcher’s, but getting anywhere from there is up to your own two feet.

The game does not rely on puzzles, so to speak, and as such there are only a few truly puzzling moments. Instead, it asks that you use logic that you find the objects necessary to progress. Most of the time that means finding an object or objects in order to trade for another that you need. There’s a hint system which utilizes tarot cards that, for the most part, points you in the right direction without holding your hand, but on a few occasions the cards are too vague to really be of any help. You’ll need to pay attention to people and locations in these situations, an attention to detail that I quite enjoyed.

Most notably, there are a couple of options as to how you can progress. I only realized this after skimming the forums for a solution after getting stuck, but when you need to check out a library book, you have the option to get your photo taken (I won’t spoil how you can manage to get money when the entire premise is that you and your mother are very poor) and apply for your own or to borrow your friend’s card. This like some dialogue options is just a different path to the same end, but it’s still a nice touch.

Mango Protocol has a twisted sense of humour and those who are easily offended should probably steer clear of this title. It presents a satirical look at commonplace problems in modern society such as obesity and religion and pokes fun at them, talking about them in ways that aren’t exactly “politically correct.” The game dares to communicate what cynics can only think and it does it in such a way that it’s utterly hilarious.

There’s also quite a bit of violence, which is understandable given that the main objective is to make it so that Agatha’s animal friends will willingly go to slaughter. If you’re squeamish, the disembowelment that the young Miss Knife takes so much pleasure in may seem distasteful, but it’s an entirely necessary part of this absurd world. 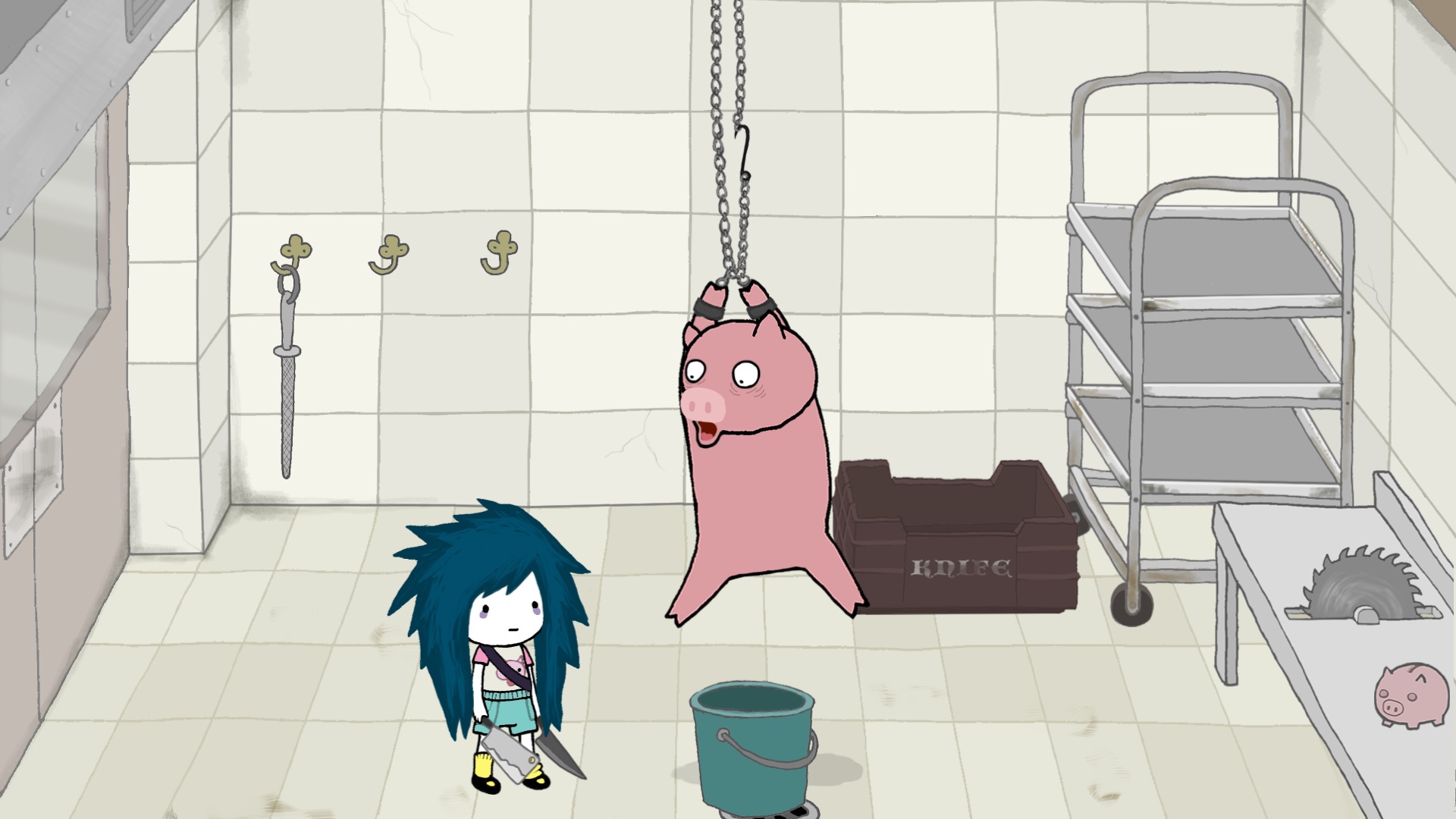 .Bottom Line.
Agatha Knife is well worth a play for those with a wicked sense of humour and a tolerance for violence and gore. Its titular protagonist is the violent, sarcastic little sister that you never knew you wanted and the game does an excellent job of presenting the world from a child’s perspective. From beginning to end, the bizarre events will keep and hold your interest and, for someone who no longer has enough time to finish her games, that’s a definite plus.