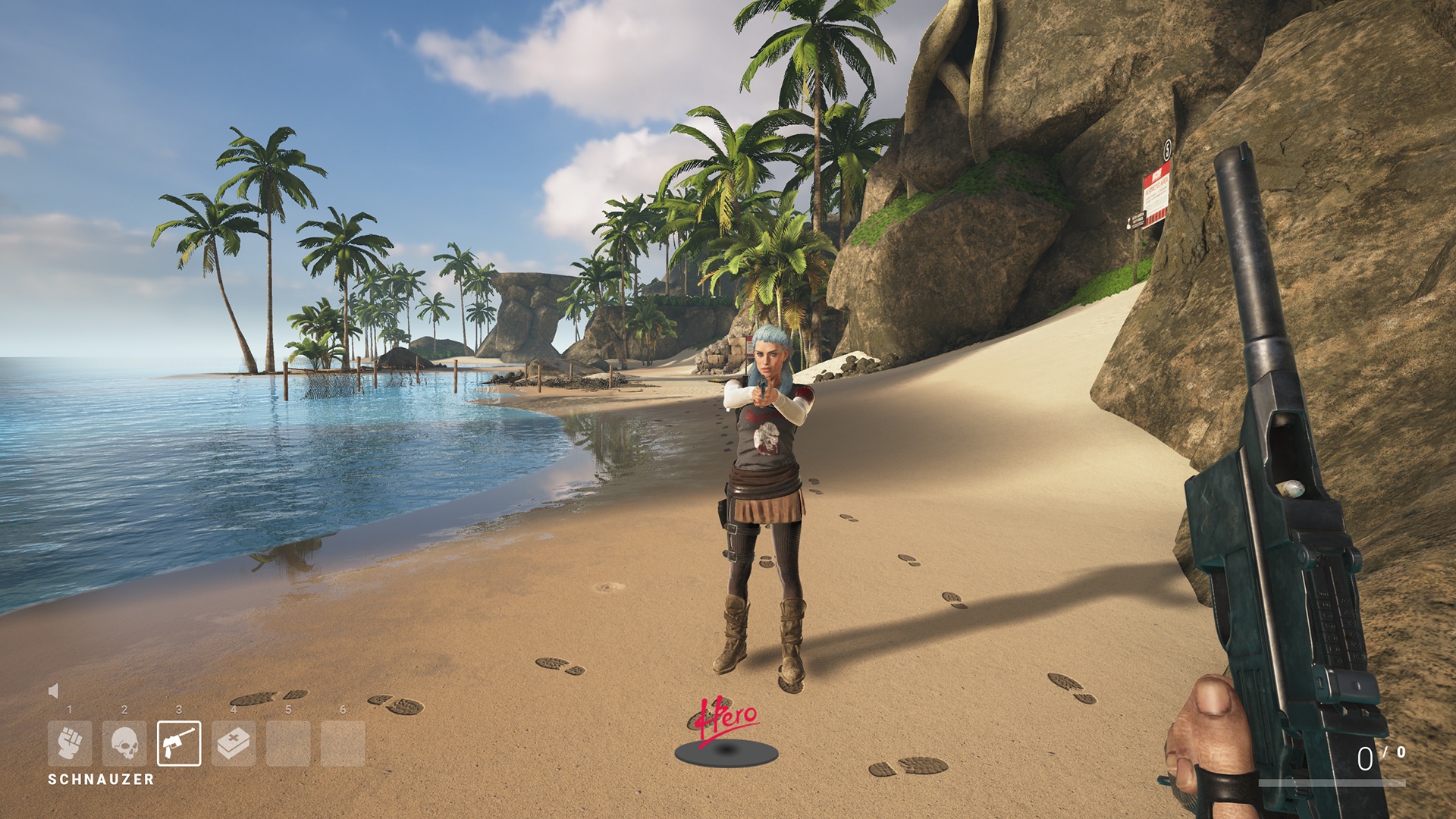 SOS is an exhilarating, competitive Multiplayer title from Outpost Games, Inc., that thrusts players into an arena in a gameshow-esque format. Modeled after reality TV competitions ala Survivor and The Amazing Race, SOS is an addictive, unforgiving battle for survival with a twist. Released on January 23rd, 2018, after an incredible launch party featuring none other than Snoop Dogg himself, SOS tries to give gamers a new experience in a sea of both Arena Deathmatch and Multiplayer “Squad” titles. But does it miss the mark?

SOS is an unforgiving initial experience, dropping players into their first battle without anything of a tutorial. I found myself watching the opening credits — and awesome intro twist that really captures the reality TV feel the Devs are obviously going for — without a clue what to do. Players choose which contestant they want to spawn in as, and there is a surprising amount of customization available in terms of what hair color, skin tone, and clothing you want to showcase. The in-game emotes are a fun way to express yourself, and you can choose three to equip for battle. SOS relies heavily on in-game voice chat, from moments of introduction during the loading sequences to actually talking to other players in the arena.

Like the show Survivor, SOS is a battle of wits and will as much as the physical skill; players must choose who to have an alliance with (if anyone) and be prepared for inevitable betrayals and sabotage. The game begins with the contestant spawning in on a beach, with only a flashlight to grab if they’re lucky. It’s a tropical setting, and useful items are scattered around. Players can find weapons that range from firearms to a coconut for bludgeoning, and papaya trees offer fruit that is used as a health pack. Flare guns are hidden as well, which are used to summon supplies as a drop from the NPC helicopter operator. 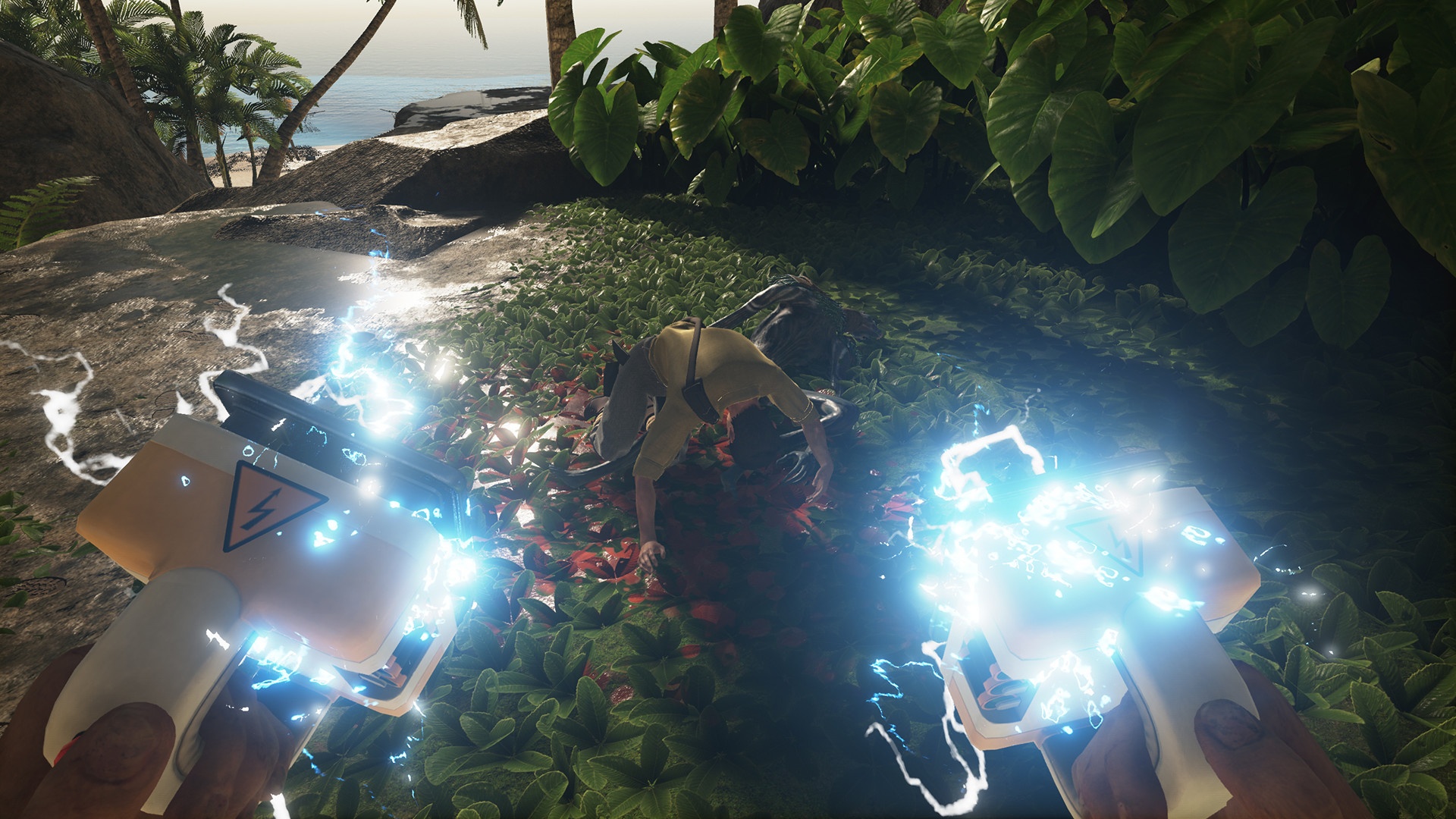 And all of this exploration and scrambling for gear happens in a treacherous jungle environment full of tall, swaying grass during numerous times of the day. There are NPC enemies — strange, eerie zombie-like monsters that will attack if they see you. Not to mention the other 15 players who may or may not try to kill you on sight. If you do encounter another player the built-in voice chat has both a radio option — including 100 frequencies, so you and your allies can hopefully be plotting in secret — and local, global audio. Alliances are made by slapping a high five, and players can leave said team whenever they want to. An alliance doesn’t mean you won’t be betrayed, either. Everyone is searching for one of three artifacts, and the extraction point only retrieves winners if they have one of these cow skull-like items strapped to their backs. This means that there is often a showdown at the extraction point, and finding an artifact is a great way to have a huge target on your back.

When you die, the “Audience” watching the match can vote on your actions using emojis. This influences your “Fame” repudiation. For example, betrayal allies can land you a negative title, whereas avoiding everyone can give you a Loner tag. Fame basically works like a ranking system, which you can gain or lose based on performance. But your reputation can be swayed by audience participation. Having a negative reputation can sway new players in terms of working with or against you, but during my sessions, I found that voice chat charisma and dumb luck seemed to influence my friends vs. foes more than anything else. SOS offers both Twitch and a built-in “stream” of the gameplay. It’s a game that was obviously designed around an interactive community and audience participation, and it balances these aspects with the gameplay nicely.

One issue that plagues SOS and similar titles are players using out-of-game communication to cheat. Within my first four games, I heard numerous accusations from opponents that other players were using Discord. It gives a definite advantage because it allows them to synchronize and find each other almost immediately, without an in-game alliance required. But there is really nothing SOS can do about this behavior; it’s an honor system among the player-base, which means it happens often. I didn’t have any issues with stability, and other than the lack of a tutorial, the learning curve is manageable if a bit steep. The graphics are modern and crisp, without being too demanding. The interface is intuitive and clean, and the controls are logical and responsive. 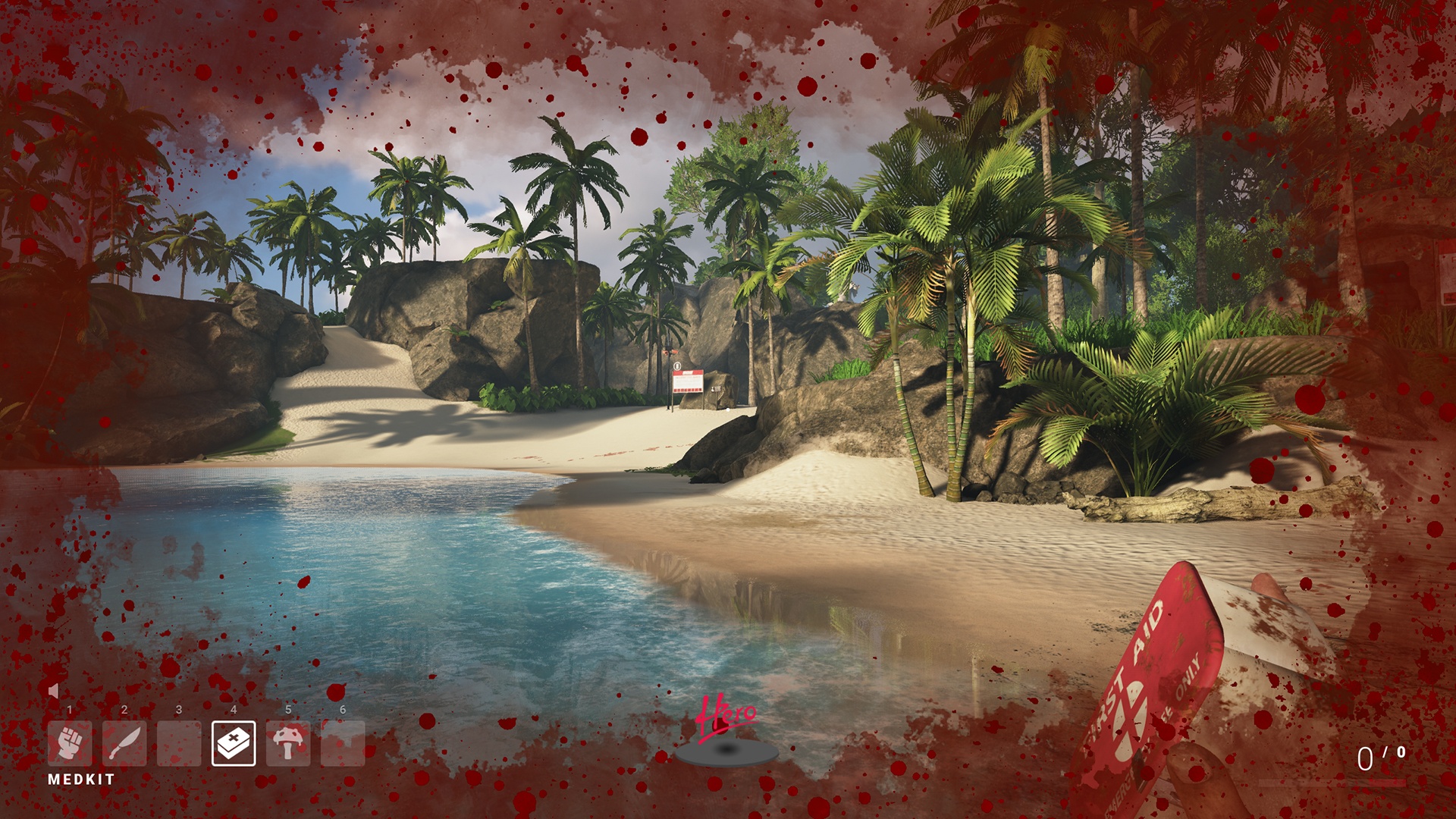 I like that SOS allows for both single-player and duo gameplay. The reality TV show aspect was an intriguing, refreshing dynamic, and the team has done an excellent job of making it immersive and original. The innate deception and potential betrayal are a fun dynamic, but as a fairly cooperation-oriented gamer, I preferred honesty and teamwork to blatant sabotage. The Twitch integration and built-in streaming platform provided by the company makes it great for content creators, and despite having no idea what I was doing at first I found myself hooked quickly.

The fact that players “cheat” using things like Discord is unfortunate. Audience participation and dead players continuing to watch the match is built into SOS’ dynamic, but outside game voice chat makes it extremely easy to break the system. It’s frustrating; the same features that make SOS feel original and exciting also encourage cheating. But there are still some nifty aspects here, including the ability to kill other players with skulls and coconuts, and the ability to team-up with strangers – even if they betray you in the end – is riveting at times. The price point isn’t too steep, so fans of the Survival genre and FPS shooters might want to consider SOS for their Steam libraries.