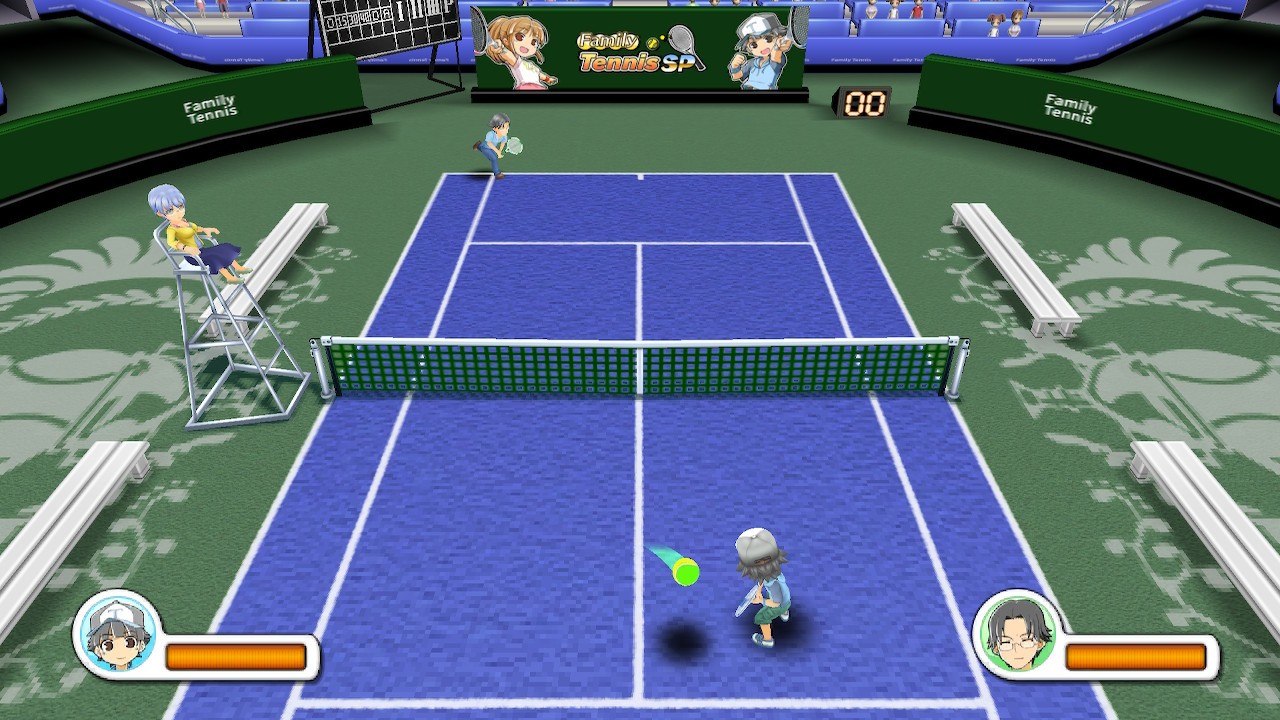 Tennis, the sport of champions, has been in video games since the days of Pong, but in today’s modern age has been nuanced to include more detailed moves. The aim has always been the same hit the ball in such a way where it is difficult to hit it back, passing your opponent.

Arc System Works, who specializes in anime-styled games, created Family Tennis SP, which takes this idea, and slightly expands on it to comedic effect. You literally are controlling family members, 8 of them, ranging from young to old, children, parents, grandparents, an aunt, and a cousin, each with varying abilities.

The moves list: you move about with the L analog stick. You execute a TOP SPIN with the A button, a DROP SHOT with the B button, you LOB a shot with the X button and SLICE with the Y button. Sending the ball back and forth, or Volleying is done by hitting the A or Y button before the ball meets the ground. Each character has a Special which is performed by hitting the shoulder buttons (L+R), which launches a cutscene. 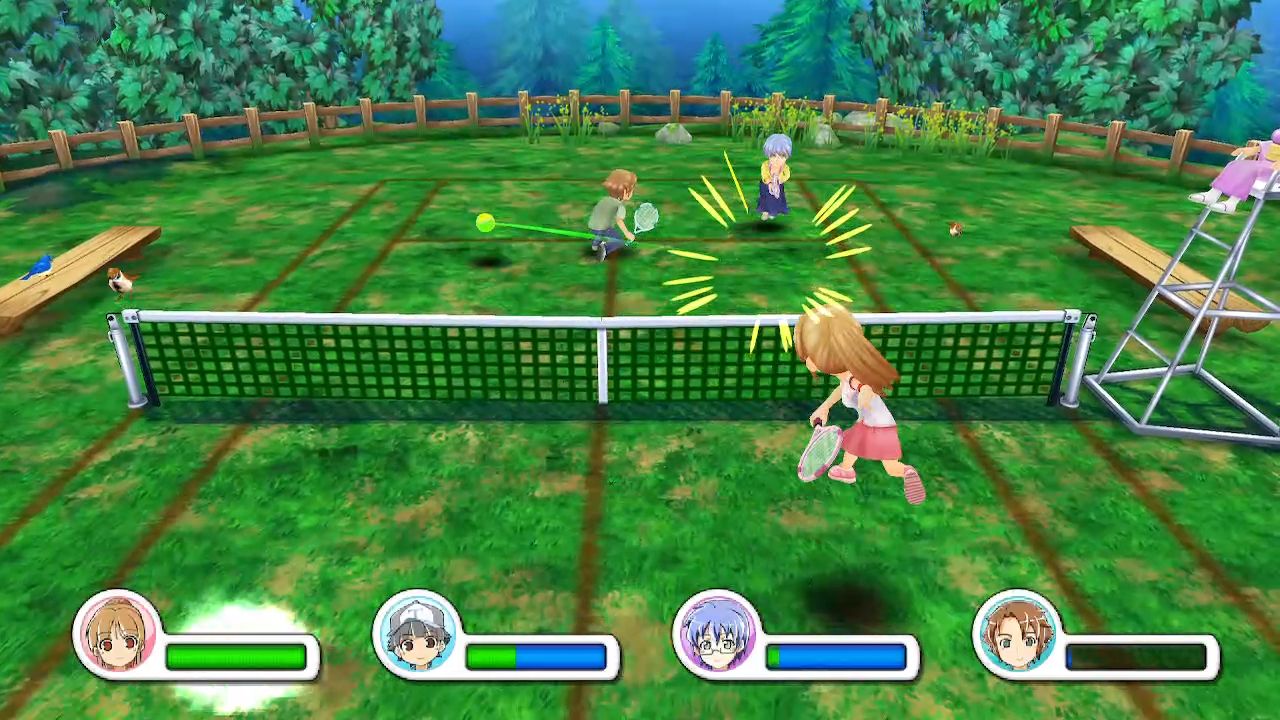 There’s a great importance in being able to see the court, so the camera is controlled with the arrow keys below the L stick. There are 4 game modes in FAMILY TENNIS SP, including 3 mini-games, which I highly recommend you play, especially Roulette Rally (it helps you learn how to use those shots, like the Smashes, Drops, and Slices, to hit various tiles across the court or differing point values. Human Backboard is a race to 100 points, which is decided by the shots you select. These two games can be played by up to 2 players. The last mini-game is a solo affair (and rightfully so) SURVIVOR, where you must take on your family until you lose a set. There is FREE PLAY, which can be played in singles or doubles. There is nothing like seeing characters of varying heights and abilities taking it to the court! What is tennis without the ability to play with others, you can do so!

So what do I think? The overall presentation seems dated, it could’ve easily been on the SNES or GAMEBOY Advance, but, in context, this is not supposed to be a serious game. The controls, for me, took a bit of getting used to. The easy-to-learn, hard-to-master approach comes to mind. I have much to learn… 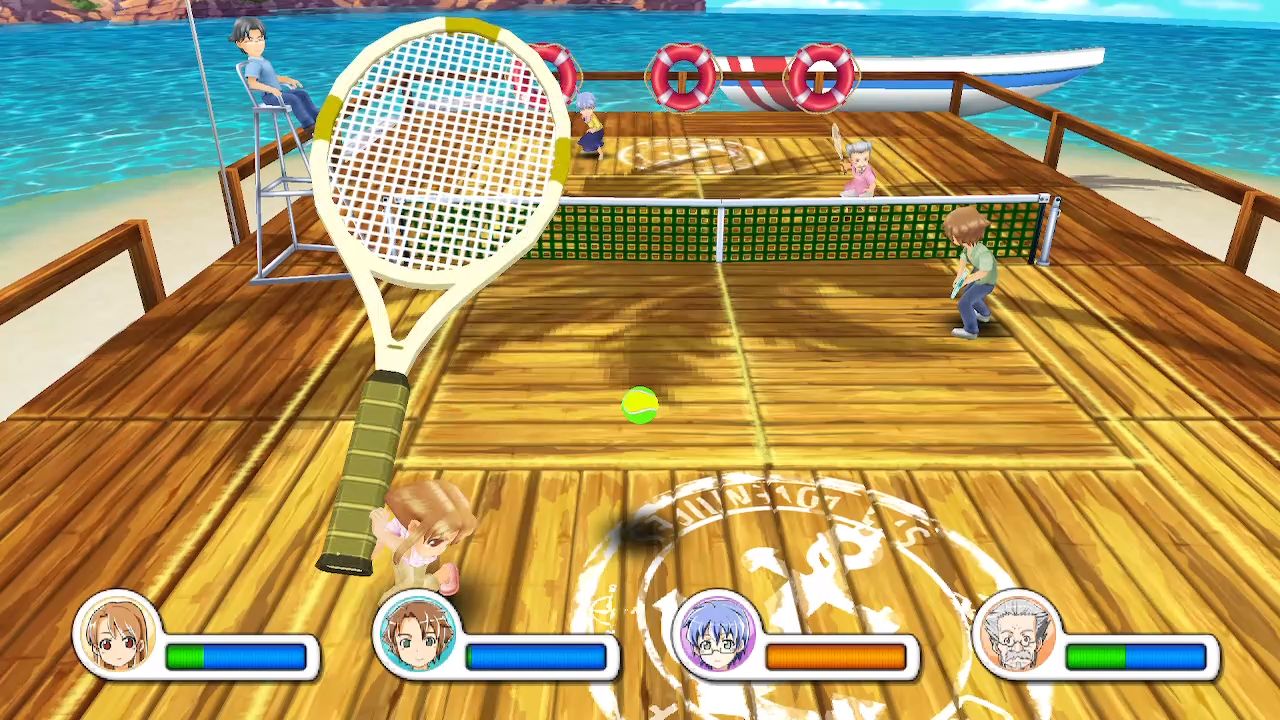 The game is fun, but you have to understand the physics because you must control where the ball will score, and that means learning boundaries, for if you hit the ball out of the mid-field of the court to the two outer lanes, or beyond the court, it is a score for your opponent. Needless to say, I was shown much “love” (Zero points) early on, so I played the mini-games to see if they could help, and, as stated earlier, one of them did. But it sure took a while!
A bad workman blames his tools, so I will blame it on, shall we say, “button placement”… Getting used to where the A button is confusing me still…after (much) practice, I was able to overcome this issue. The one problem I noticed is that the camera locked in place when diving for the ball which cuts off where your character is, which in turn will mean points for your opponent.

The music is a bit cutesy and repetitive, I personally couldn’t abide, though others may like it. Other than these issues, it sounded like tennis, where the various hits had intensity or lack thereof. So…is it a purchase? Yes! Even though the game looks like a Game Boy game, it doesn’t detract from the overall fun, which, in the end, is all that really matters.

Even though the game looks like a Game Boy game, it doesn’t detract from the overall fun, which, in the end, is all that really matters.