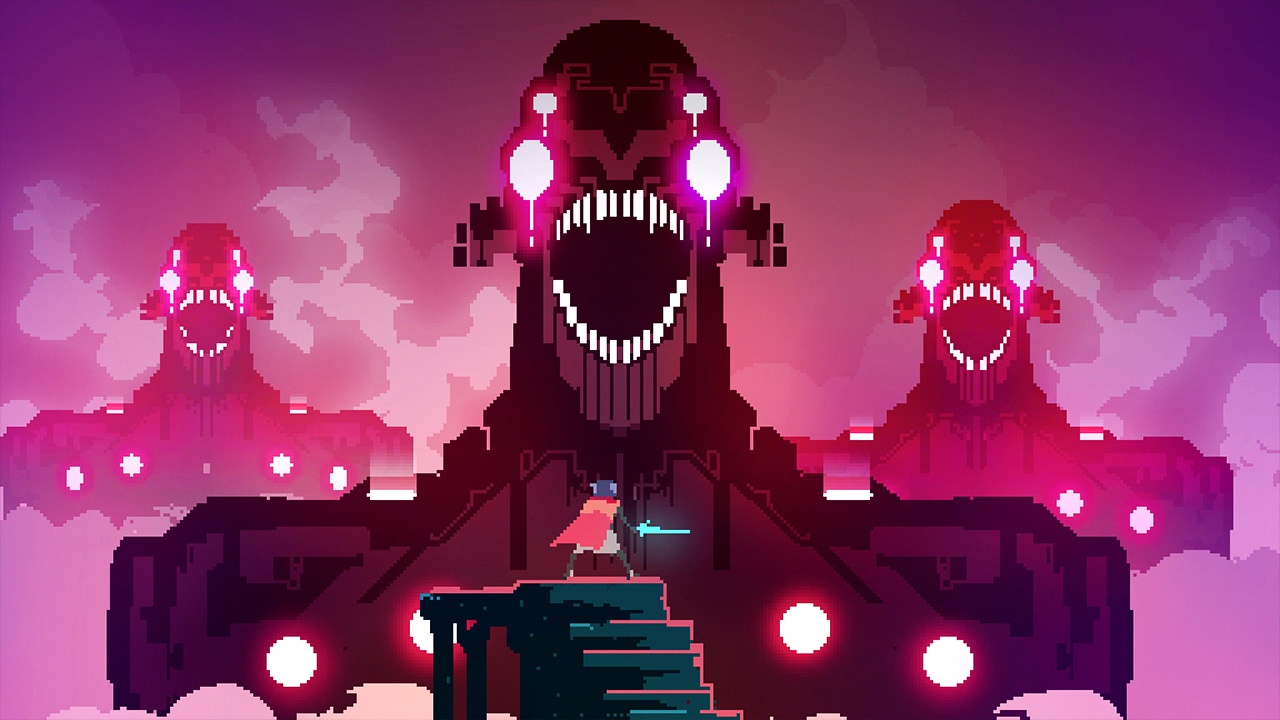 The SNES is constantly, unrelentingly put up on this pedestal as the pinnacle of gaming for folks in their 30s or older, and for exceptionally good reason. When you look back at the massive catalog of memorable and excellent games, not to mention the number of titles that end up on “Best Game Ever” lists, it’s hard not to overlook some of the system’s shortcomings. Nevermind the fact that titles were damn expensive for the era, the closed ecosystem and Nintendo’s draconian control made it a nightmare for indies, and the fact that, compared to subsequent systems, it did shockingly little to innovate. We can do our best to look past all those things when we remember the power and success of titles from every genre imaginable, though I’ll always be a bit saddened Princess Maker and Wonder Project J never got officially localized. Still, it’s a gold standard for gaming, and it’s certainly a great hero to emulate in modern-day affairs.

You are the Drifter, a nameless, voiceless entity with the ability to traverse land and space in the blink of an eye. You wield an energy sword, can move like a beam of light, and carry technology from a time long since eroded by tragedy. But you are not immortal. Something eats away inside you, carving out your energy and replacing it with decay and you struggle against it, even as you actively fight to destroy it. There’s an existential game of cat and mouse happening: the fight that we see on the screen benefits the Drifter and the Drifter alone. The people of this post-apocalyptic world seem, for the most part, happy and idyllic. There is horror at the boundaries of the land –  people being slaughtered in the mountains, enslavement and devouring in a picturesque kingdom – and it’s suggested that these atrocities are even known. But the Drifter will help them only as a matter of circumstance. Ultimately, he seeks only to save himself, and it is not a result of cruelty or arrogance. The Drifter merely does what we all seek to do: survive.

Hyper Light Drifter presents as an action adventure with light RPG elements, giving a 3rd person vantage of some truly fast paced, pinpoint accuracy style combat. The Drifter starts with the three most important things he could want: his sword, his gun, and his dash. The sword and gun help the game play out in a variant of the Furi methodology, in which you’ll really need to consider when ranged combat will work and when it’s time to get close and dirty. Additionally, the ammunition can only be recharged by striking things with your sword, and the bullets come back a whole lot faster if you’re hitting enemies instead of, say, breakable crates. Your dash ability, however, is the main course of this entire game, because if you don’t learn how to utilize it, you’ll never get anywhere. Besides allowing the Drifter to cross divides and chasms, it’s also the only way to keep up from being overwhelmed when enemies swarm you, which is a common occurrence. Over time, the Drifter will find ancient batteries that allow him to charge his weapons into something better, like deflecting bullets with his sword, or doing a dashing strike to mow down mobs. Yet the keystone is still just moving fast: be nimble or be dead. 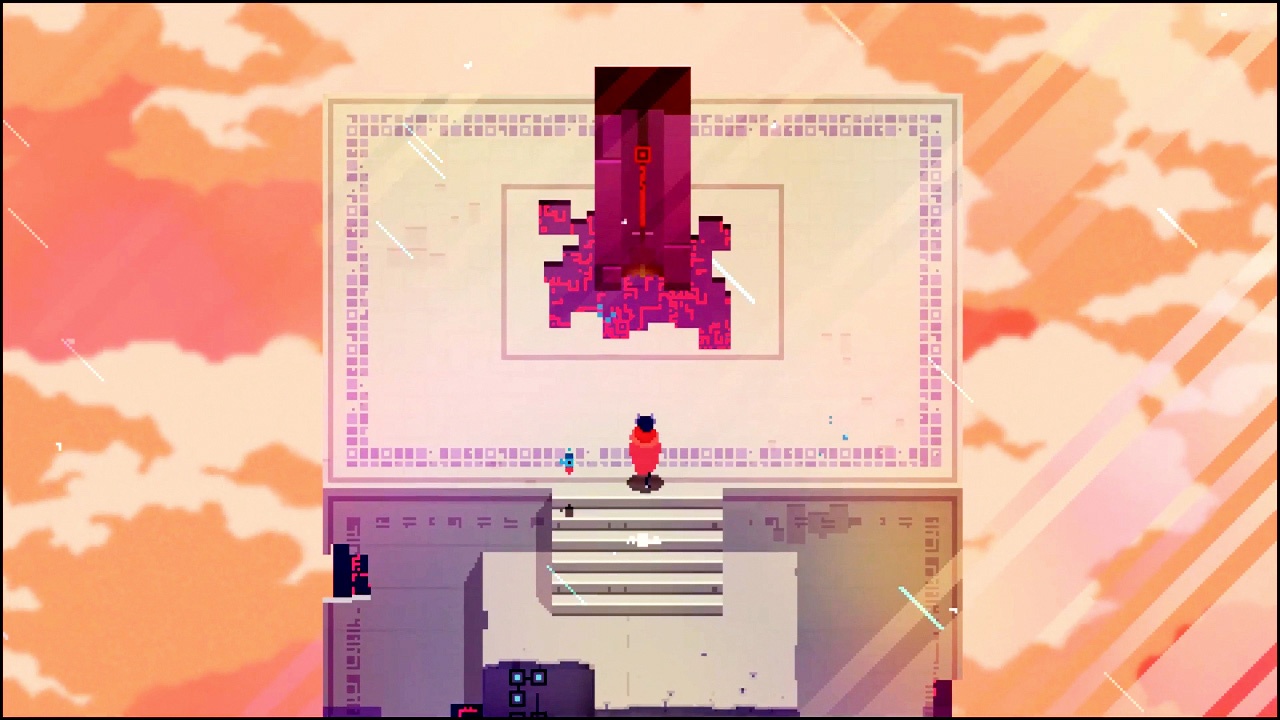 Heart Machine, lead by Alex Preston, has let the populous know that the intention of Hyper Light Drifter is to recapture various nuances that the SNES generation allowed in gaming: immersive experience through gameplay and storytelling without words. Indeed, there isn’t a written line of dialogue anywhere in the game, instead opting for visual storyboarding when NPCs “talk” and letting the landscape around you tell the tale of what happened before. In all honesty, Hyper Light Drifter has some of my favorite landscape designs and backgrounds in recent years. Crafted in a purposely jagged, torn manner, the player gets the history of massive, humanoid beasts that were once omnipresent on the world, through they met some kind of end, possibly at the hands of the Drifter. You see their ruined forms scattered throughout the lands, giving you a scope of their size and their terror. The madness that came after that – the bird cult, the cannibalistic frog people – can only be described as disquieting: it’s certainly not scary, but it sits uncomfortably still, letting you decide the full reach of how it affects everyone.

The visuals keep the game going and keep the player engaged during the hard times. True to the word, without any narrative clues in linguistic form, the path for the Drifter to follow can sometimes be confusing to decide. You’ll probably trek all the way to one end of the map, find out that you can go no further, and slowly make your way back, checking for forks in the road or hidden pathways that might lead you the right way. Once you decipher your next course of action though, the game rockets forward; practically dragging you along as you make your way towards the next monolith that’ll unlock the next area. I never felt frustrated enough to stop playing, but there were times when I felt that I had to break form and methodically go over certain spots time and time again to ensure that I was going the right way. It pulls you a bit out of the moment, but then you’ll get bum rushed by a room full of varied enemies and the whole thing snaps dramatically back into place.

Right, the combat. Hyper Light Drifter has some of the tightest, most unforgiving but enthralling combat that you can get with such simple presentation. The enemies do not wait or take turns wailing on you: if you get swamped, a full health bar can disappear in the blink of an eye. Even though everyone telegraphs when they’re about to hit you, it can be tricky to tell who’s going to land first and who is waiting a split second longer. The result is being able to really tear into the “hyper light” quotient of the game and blitz around the room as best you can, working out your fearsome accuracy with the flash and stab approach. Once things become fluid, you’ll experience something like Time Recoil, where everyone feels slower and you’re in total control of the situation: dash, slash, dash, shoot twice, dash and stab again. Since everyone has their own combat style, it never gets monotonous, and you’ll hardly have a chance to relax when something besides you is moving on the screen.

Boss fights fall into this same kind of motif as well. Though not nearly as punishing as Hollow Knight or even Salt and Sanctuary, the ruling mutants of Hyper Light Drifter all have their own charm and brutality that needs to be unlocked, hopefully faster than they can take you down. One of the first bosses you encounter is, comparatively, child’s play with the others, and it’ll lull you into this false sense of security. Don’t. Don’t think for a second the living Gods of this world will roll over and let you take away their power. They might not be Absolute Radiance, but you’ll get your pretty face murdered to death if you don’t take them seriously. 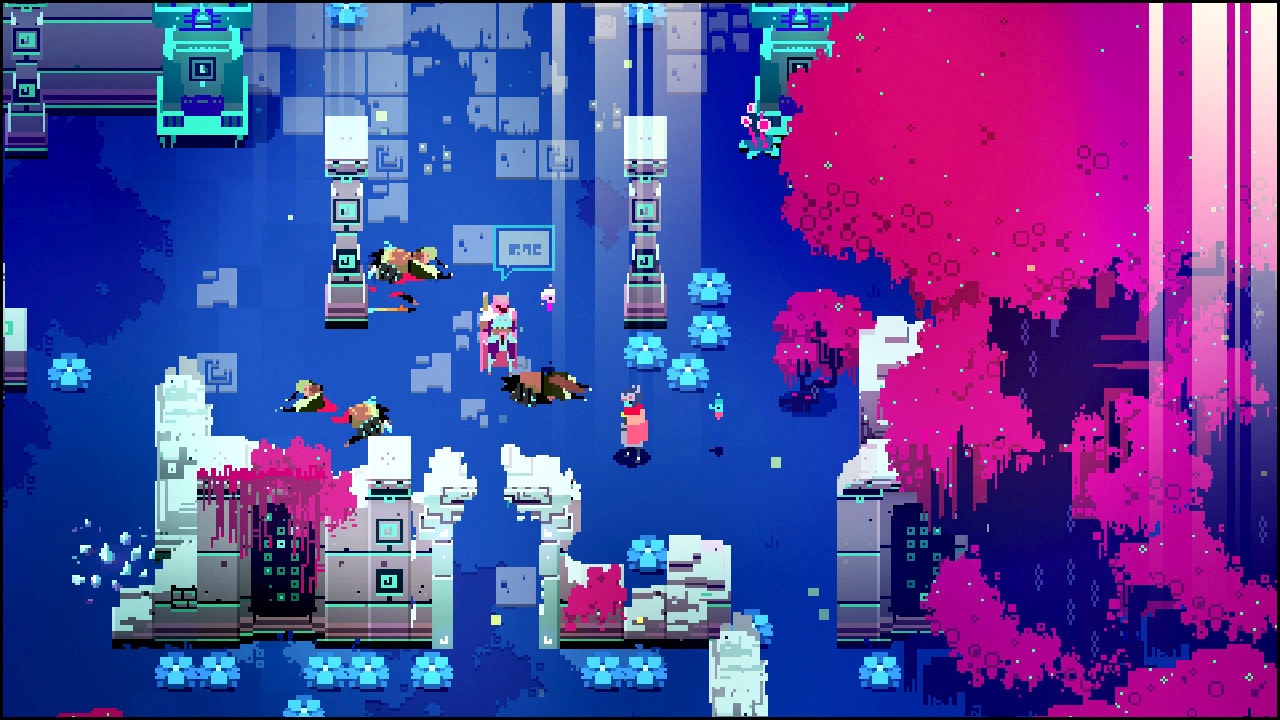 Abylight Studios, who’ve done the porting to the Nintendo Switch, have boasted mightily about keeping it at 60fps for the entire game. And I’d say they succeeded…mostly. See, I didn’t have a problem with dropped frames, not even once. Cheers on them for that, because my awful PC couldn’t do that on a good day. No, the technical issue I ran into was some serious stuttering between room changes, particularly when the next room had a ton of enemies in it. While it seemed to get better over time, one of the first big rooms I encountered promptly skipped for a moment, and that gave the denizens enough time to land the first blow, which threw me off for the remainder of the fight. As a matter of precaution, I would HIGHLY recommend making sure your microSD card is a high read speed OR to simply eject the card prior to download and force the install to the NAND. I did this and it kept any future problems from happening. Let me state that, at the time of this writing, I’ve reviewed literally hundreds of games and my card is probably suffering some real fatigue from all the installs and deletion, so please take this criticism with a grain of salt.

Lastly, the Nintendo content. Thanks for including the achievements, that really means a lot to most players and kept a certain level of delight about things (except for trying to do a deathless run, never gonna happen). The Tower Climb is an excellent bit of additional content for players who are well versed in the game but don’t necessarily just want to run through vanilla all over again, giving some great challenge and variance to the game without being too distracting. Besides the Alt game that allows the player to play as Anubis, there is an additional character to unlock throughout the course of the game, giving another strategy for players to approach and test out their mettle. An unlockable costume acts as kind of a gentle dowsing rod for hidden items, perfect for newcomers really looking to 100% the journey. Lastly, a new gun is included, the Crystal Shot, though I never really cared for the gun changes as they were, much less adding yet another choice to the mix. Plus, the ability to freeze enemies and then hit them just felt counter to what I want the gun to do: ping from a distance. Just give me the six-shooter and plenty of room to dash, and we’re good to go.

Hyper Light Drifter is serious about its commitment to re-creating and preserving the luster and joy of games gone by in their own way, and I think that Heart Machine has done a magnificent job. Not only does this feel like a title that I would have gotten lost in when I was younger, it actually IS a title that I got lost in as an adult. Just to keep checking my phone and mutter “three more minutes” while twenty tick by is a really grand sensation, and the fact that I can bring this on the go only sweetens the deal. If you’ve never played before, this is the perfect time and place to finally engage the Hyper Light Drifter. If you’ve already run this path before, then you still may want to consider double dipping: all this new content is a Nintendo Exclusive for now, and why not give yourself an excuse to retread the path of the Drifter’s desperate rage against the darkness?

A wonderfully haunting tale of dystopian redemption, Hyper Light Drifter finally has the one thing that it’s always been missing: portability.