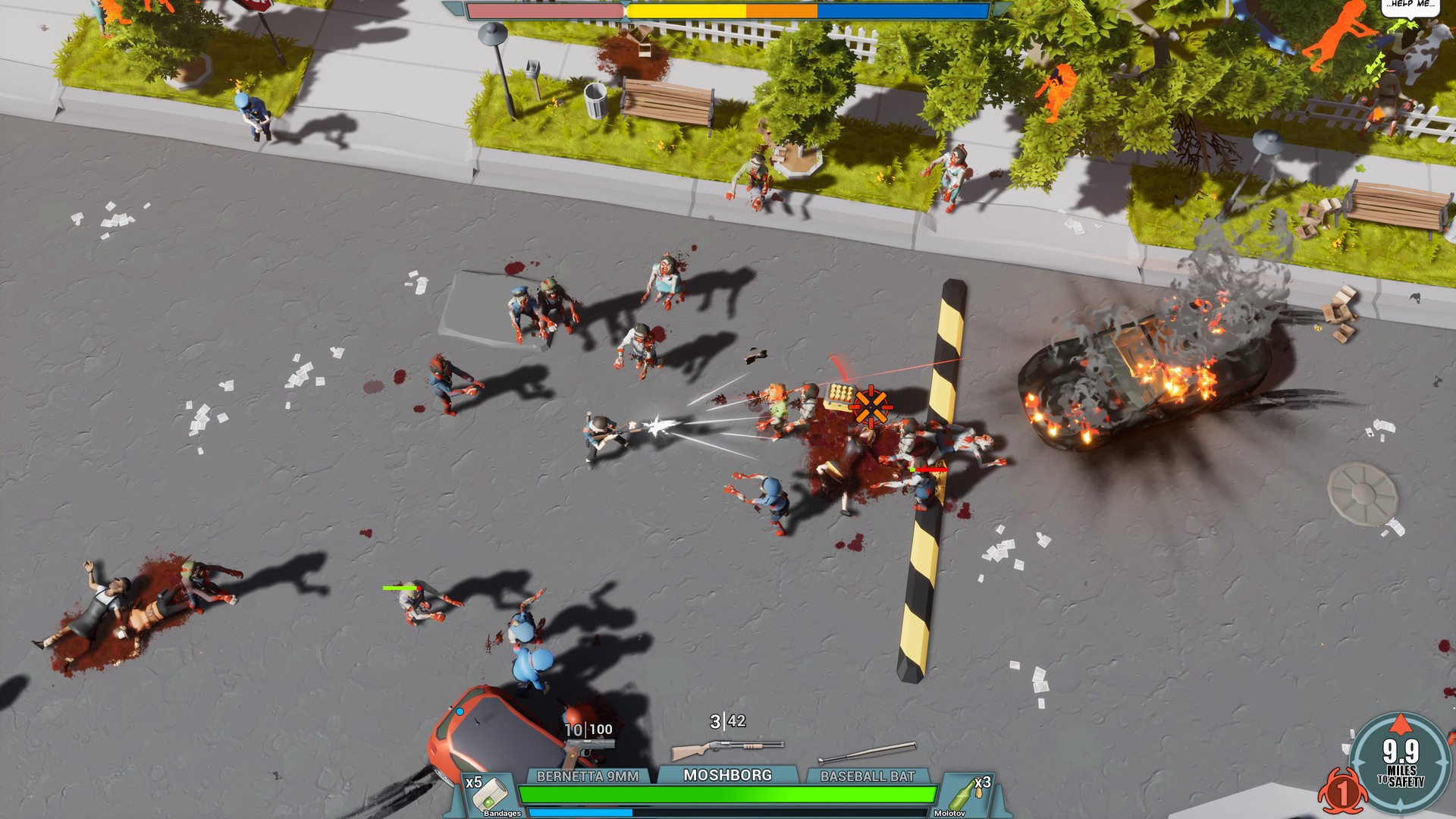 Let’s be honest, zombies are never going to be your friend. So when you are thrust into a situation where your life depends on you escaping their cold, heartless brain eating ways, you are going to do all it takes to survive. That fight or flight emotion can be very hard to replicate in a computer game, but developers Trickjump games have done an amazing job in their latest title 10 Miles to Safety. This early access Action Strategy game has the player running for their life from a zombie apocalypse. 1 to 4 players must explore, loot, craft and build defences to survive. A randomly generated world where the aim is to get rescued, survive, and then ultimately escape.

The game starts with you lying in a hospital bed, there is devastation all around. You have no idea what has happened, as you leave your trashed room you hear a sound, a radio message. Can this help to shed light onto the mystery that surrounds you? A pathogen has infected humanity, society has broken down. Follow the on-screen instructions to learn the basics to survive. As you plan to exit the hospital another message, safety is close. A mere 10 miles away, only 10 miles to safety.

You now have a choice of what you want to do, your only limitations; a compass, which indicates the direction of travel and distance, a symbol which shows the severity of the outbreak, and more importantly the day to night cycle is highlighted clearly on the screen. As day turns to dusk “Night is coming, prepare to survive” is emblazoned on the screen. It’s time to find somewhere to hide, but where? You search and search, but time runs out, anywhere is better than outside. Then you hear the screams. Your fear levels rise. Build those defences, you plan to slow them down, the important question is, will you survive?

This top down action adventure has you walking through an abandoned and dilapidated town. The only signs that it was ever populated are the remains of burnt out cars, and the bodies of innocent citizens, victims in this outbreak. Zombies wander aimlessly around, occasionally lunging towards you to eat your juicy brain, shoot them or smash them with your bat, the choice is yours. 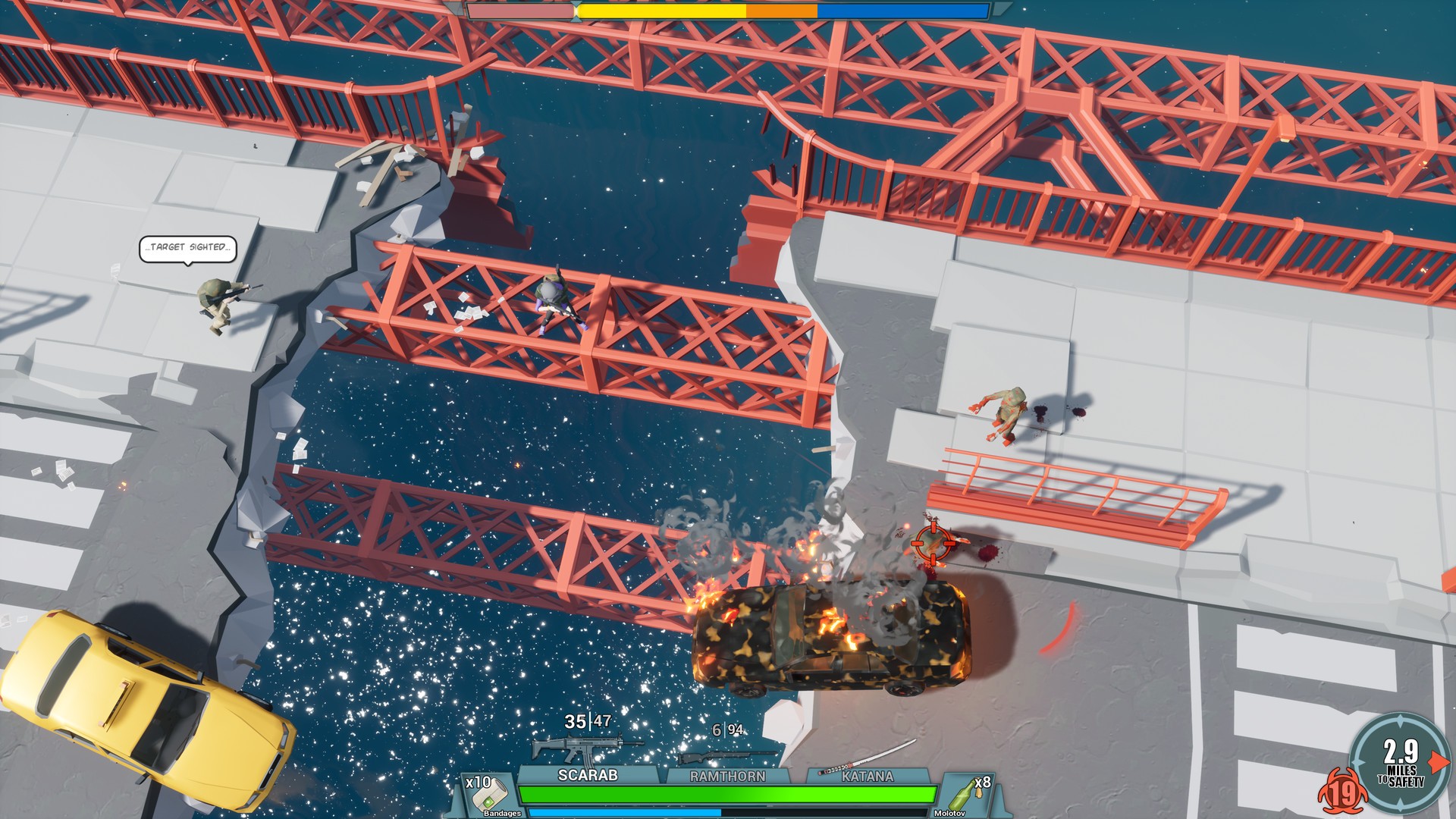 You will be walking through the town and a distant gun shot will ring out, in the distance a figure runs towards you, friend or foe? The dialogue bubble “Help, this is crazy” shows another unfortunate soul caught up in this madness. Like with all good zombie games, fear and suspense are the driving factors. The 10 Miles to Safety soundtrack delivers a perfect combination of dread and despair. The calm and tranquil piano music plays in the background, it really sets the scene. Its minor tones emphasising that all hope is lost. The zombie sounds are reminiscent of classic zombie films, such as; Night of the Living Dead, and Dawn of the Dead. The constant groan of the brain munchers filled me with utter terror. The audio for me just worked perfectly, with so much noise you’d think that it would be a horrible mess, but it isn’t. It’s busy, loud and worrying, it really captures the emotion and fear factor that the developers wanted to inject into their game.

Graphically, the indie developers have done well to focus on the details. This not only helps to make the game look attractive, but makes it easy to play. The interface on the screen isn’t cluttered, this means you focus on the action in front of you, the fog of war is at a distance where you fear walking into the unknown, but you always feel comfortable that you can plan for the next move. NPC’s and zombies have a clear highlighted hue surrounding them. When both are out of direct sight you can easily identify friend or foe. This game has a distinct requirement to loot and the accessible storage is clearly marked with different coloured orbs. Using and finding materials is a key mechanic of the game. Destroy exiting barricades and loot everything you can. With a fully functioning craft menu, any item could be the key to your survival.

A procedural generated map ensures that every attempt at survival is unique, houses throughout the game will alter as you make your way through the world. The games one aim, to escape is punctuated by smaller micro missions, whether they are saving the public, help the emergency services, or protect the loot drop; I found them to be particularly unforgiving for the solo player. I began ignoring the missions as I was more likely to die than succeed. With a number of survivors this additional challenge would be a welcome break from the linear goal. 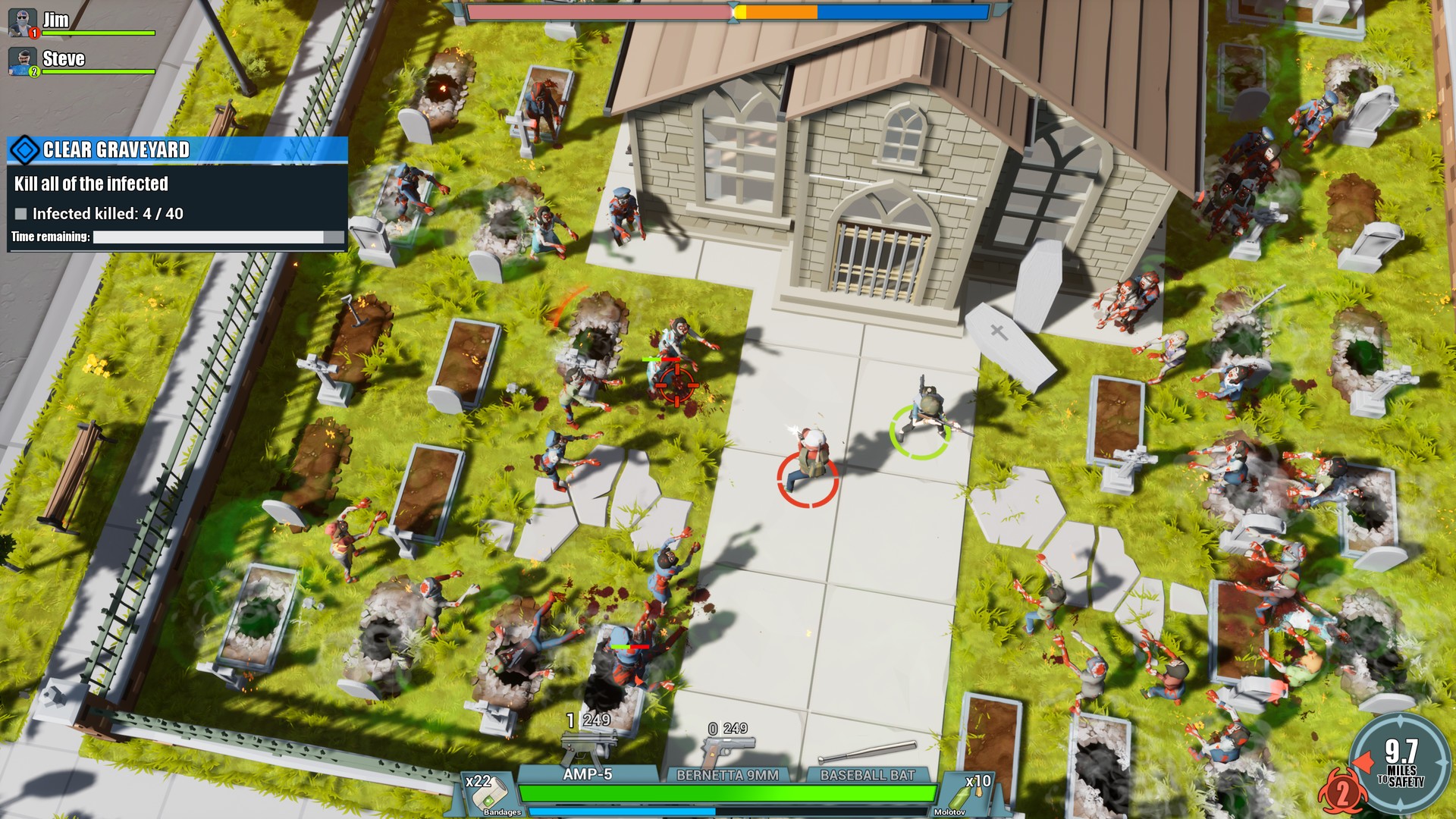 Controls are easy and crisp, you can utilise a controller or mouse and keyboard, for me the controller was an easier way to play, but if you have been playing PC games most of your gaming career then the mouse and keyboard will surely be the way to go. Aiming is assisted with an on-screen crosshair, for me this was extremely useful, as a number of times I had gotten lost in the moment, and without it I would have undoubtedly shot a wall instead of a zombie. It’s a dual stick controlled game, I’m personally not very good at these, so if you are like me, some practise may be required.

My major gripe with this title is small, but I feel quite important. The NPC’s have no interaction with you, you receive an automated dialogue and whether you choose to save them or not, nothing happens. You risk your life to help them and there are no signs of gratitude. It’s easier to forget humanity and your natural instinct to help. I say just leave them to be munched!

Trickjump games took a leap into an already crowded genre, with fans known to be very particular about how their zombie survival games play out. Do I believe they have nailed it, and this little indie title has made it into Zombie apocalyptic folklore? Yes, I do, the game isn’t perfect, but its few minor drawbacks are so heavily outweighed by the positives that even the most hardcore of zombie fans will forgive it. Would I recommend the game? Yes, I would. Great fun solo, a fresh and interesting adventure every time you play and I’m sure much more fun with friends. So why not try it, remember it’s only a mere 10 Miles to Safety.

A fun, yet challenging Zombie survival game. Build, scavenge and help the innocent, but above all else you must run. 10 Miles has never seemed so far away.