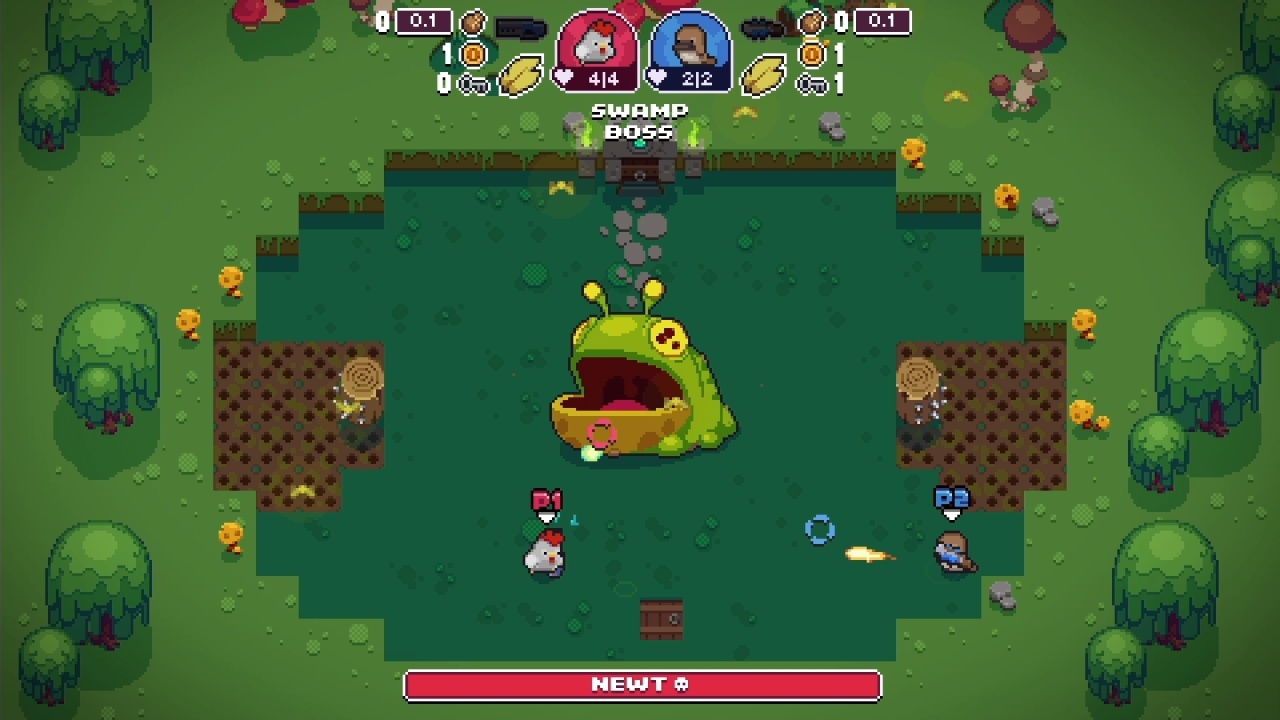 There is always, always a struggle for the top of the roguelite twinstick tower. Depending on who you talk to, there’s someone different wearing the crown at any given moment, be it The Binding of Isaac, Enter the Gungeon, Nuclear Throne or another title (I also love Deathstate dearly and hope it comes to the Switch someday). But the history of royalty is often bloody and chaotic, as anyone with tenacity and violence can come seize the title. I can’t say for certain that Blazing Beaks, which comes to us from Applava, can rise to the top, but it caught me off-guard in a fantastic and powerful way, and that says a lot.

Much like other twinstick shooters, Blazing Beaks has a story…somewhere. You’re on a planet or island or something where birds are in charge and living their very best lives in harmony when monsters show up. The birds, rather than just give up and become pâté, decide to do something about the invasion to the tune of “blow a ton of stuff up with our guns.” Yea, the birds have developed a healthy and borderline psychotic affinity with the Second Amendment, but what do you expect? There are alien monster things, and they gotta solve the problem somehow. Starting as one of five birds (with three more to unlock), you must blast your way through several bosses and multiple rooms of hostile, explosive and downright frustrating opposition to get things back to normal. After all, it’s almost migration season, and you can’t be sitting around HERE the rest of the year. So grab your gun and up to three other friends: it’s wabbit season.

Blazing Beaks starts off the approach with a somewhat traditional situation: you’ve got a room full of baddies, and you need to clear them to move on. You’ve got one of several starter guns (each bird has a different type) that has unlimited ammo but not unlimited clips, and so reloading and rate of fire are both things to be considered. You have the skill to essentially do a dash away or towards the enemy, but that skill can be interchanged after a period of time. There are markings that appear above monsters to let you know that they can drop certain items upon death, be it coins, keys, hearts…or artifacts. And the artifacts are the beginning of the altered state of Blazing Beaks that makes it utterly addicting in the risk/reward faction. 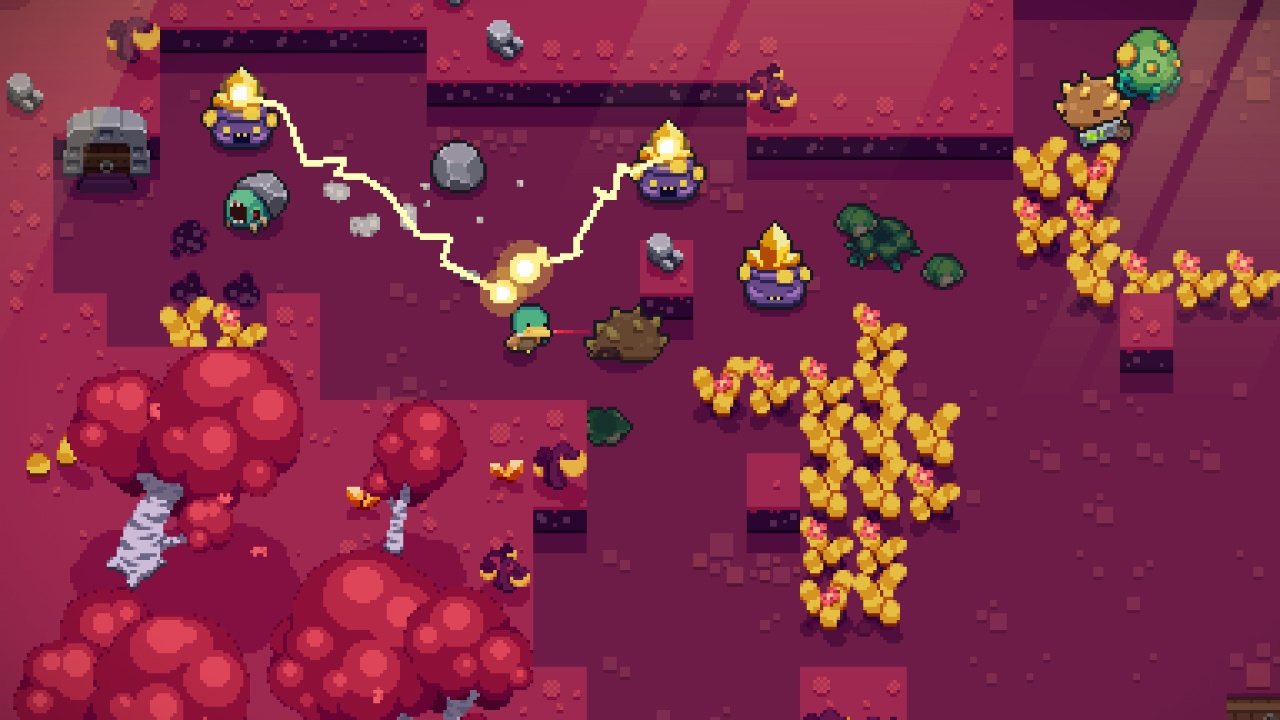 You see, similar to Soulblight, Blazing Beaks utilizes a penalty system in which a majority of the items that enemies drop hinder you and hinder you quite badly. They do things like “the next HP you lose also is lost from your permanent HP” or “enemies stop dropping hearts” or “hearts explode if you don’t pick them up.” My personal favorite pain in the proverbial is “if an enemy touches you, you’re automatically dead.” Best of all, these penalties stack, meaning you can end up totally and utterly in a whole world of hurt and create a situation in which you’re on the brink of death and disaster, with reduced speed, weapon range, reload speed, enemies creating massive pools of acid and, oh yea, your gun jams for five full seconds if you take any damage. It’s truly amazing how far gone you can get yourself if you collect enough terrible artifacts.

So why the hell would you want to pick them up? The answer is “upgrade for sweet loot.” If you can drag your sorry carcass around long enough without contracting “killed in the face-itis,” then you’ll discover a shop where the local merchant craves these sort of awful items. You get to trade them in and immediately lose the negative effects, and then get to pick up some fantastic ones that reward you mightily. “Heal all HP and add one more to your overall total.” “20% damage increase to weapon.” You might even find a replacement for your dash with another skill that can do things like make you invisible for three seconds, drop out eggs that explode after a moment, or simply push every enemy away from you so you can get a moment to breathe. The system here is fantabulous, and it’s what keeps the game extremely exciting and full of promise. If there wasn’t the artifact system, the game would still be fantastic, but most rogue runners would grow bored and probably hang up their pistols quickly.

Outside of the artifacts, Blazing Beaks still delivers a solid twinstick experience. The coins can be used to eventually purchase some really sweet guns, such as my personal favorite, the buzzsaw shooter that lets me fill the screen with bouncing blades that can really make things hard for onscreen enemies. Keys unlock random rooms that can help you (random treasure chests of artifacts, both positive and negative) or do you over (just full of explosive flies, just full). Each world has unique enemies that cater towards the environment and ask you to learn new attack patterns and styles, though nothing really beats “invisible frog” and, the biggest pain of them all, “ghost that attacks you or enemies, whichever it feels like, and you can’t shoot it.” There are, at the current time, five bosses (one for each world), and they all have their own unique attack patterns and styles. Beating a boss means usually getting at least one or two good artifacts, and then one or two bad ones if you really feel like punishing yourself. 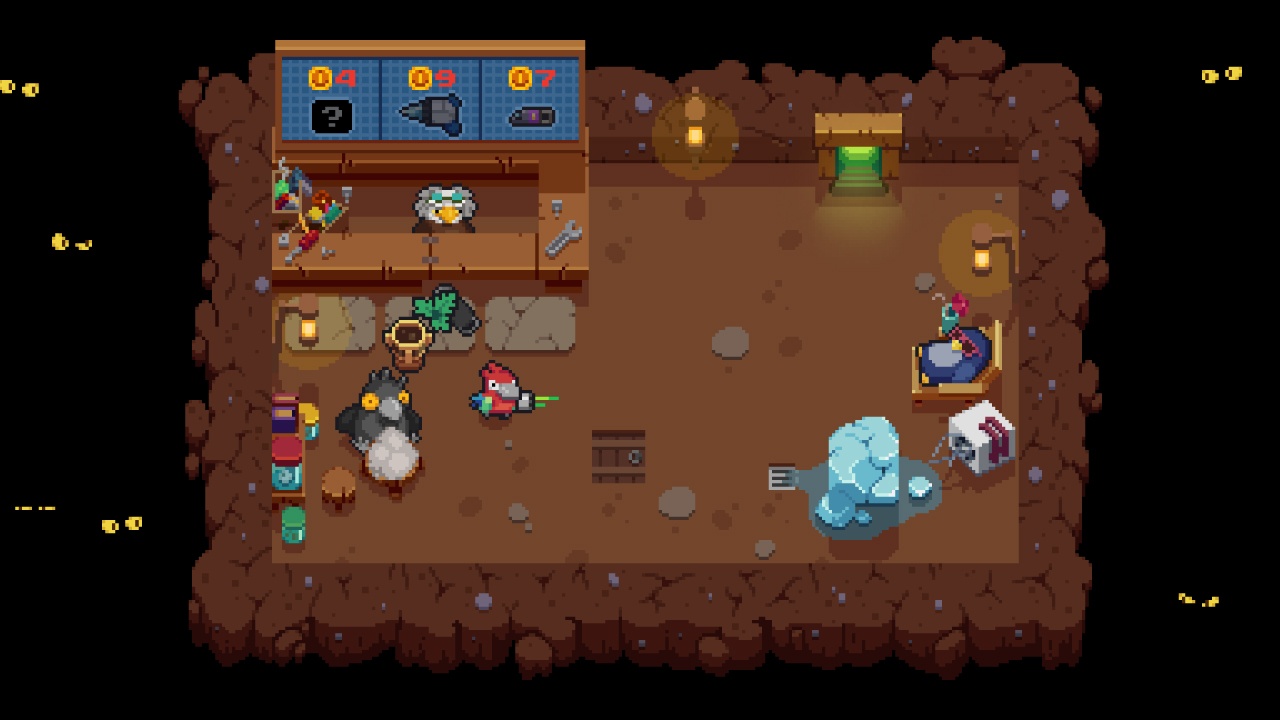 Interestingly, the bosses of Blazing Beaks also have their own risk/reward setup. When you first encounter the boss door, you usually have the option to head on in or take a second door that leads elsewhere, and the world simply continues. If you think that you can get better loot, drop off the artifacts that are dragging you down, or you simply want to delay the inevitable, you can, but at a price. The boss has a one to three difficulty ranking, and the rank goes up every time you pass by their door. For single player, this risk can really garner worse and worse results, especially as you progress towards the last few worlds and the pressure gets more intense. If you’ve got the right weapon in hand, like the ice gun or something similar, you might be able to get away with plinking your way to victory. Otherwise, though…it gets heavy.

Strangely, Blazing Beaks has this huge multiplayer aspect to it, and this is where the game feels like it falters, at least on the Switch. The prospect of playing with a single JoyCon is an enticing one, yet the game changes tone drastically if you’re armed with only one joystick. The game defaults to autoaim, which makes sense: you’ve only got one joystick, and you gotta be able to move. However, it simultaneously makes the game too easy and too hard in the same breath. For a lot of cases, you just need to walk around and push the fire button, and the game does it for you: even the Chicken, who supposedly has worse aim while running, can still drop a bead well. Then again, if you’re like me and you actually care about the marks (especially with Chicken, since that’s an instant kill if you land the shot), now you’re frustrated because the game often wants to lock onto another enemy which it perceives as a greater threat. This carries over into the multiplayer “deathmatch” arenas as well, where a lot of the challenges goes flying out the window if you can just walk and shoot. Still, the argument is to be made to simply carry two sets of JoyCons or a Pro Controller in order to balance things out. Then the game becomes a proper multiplayer event, and things like long games with loops are so much easier with friends in hand.

There’s even more to Blazing Beaks than what I’ve discussed here, and it comes down to fans to really dig in and find what they love the most about the game. From each bird having different abilities and offsets to the sheer number of artifacts, guns and powerups there are to discover, Blazing Beaks is a treasure of a shooter, with so many savory layers and decadent overpowerings that you won’t believe it’s under twenty bucks. The pixel graphics are incredibly well designed, giving differentiation, color and depth to everything, and the soundtrack is appropriately offbeat and quirky. Blazing Beaks is now number two on my Switch shooters, happily dethroning Gungeon as a go-to for more in-depth but still quick play. As soon as my kids get more acclimated to using multiple joysticks, I’ve got a platypus and a penguin to add to my flock, and we’re going to kick some serious tail feathers together. You gotta play this game.

I can’t even quack a proper joke: Blazing Beaks is such a complex and enjoyable roguelite twinstick that I gotta finish this review and go play more.