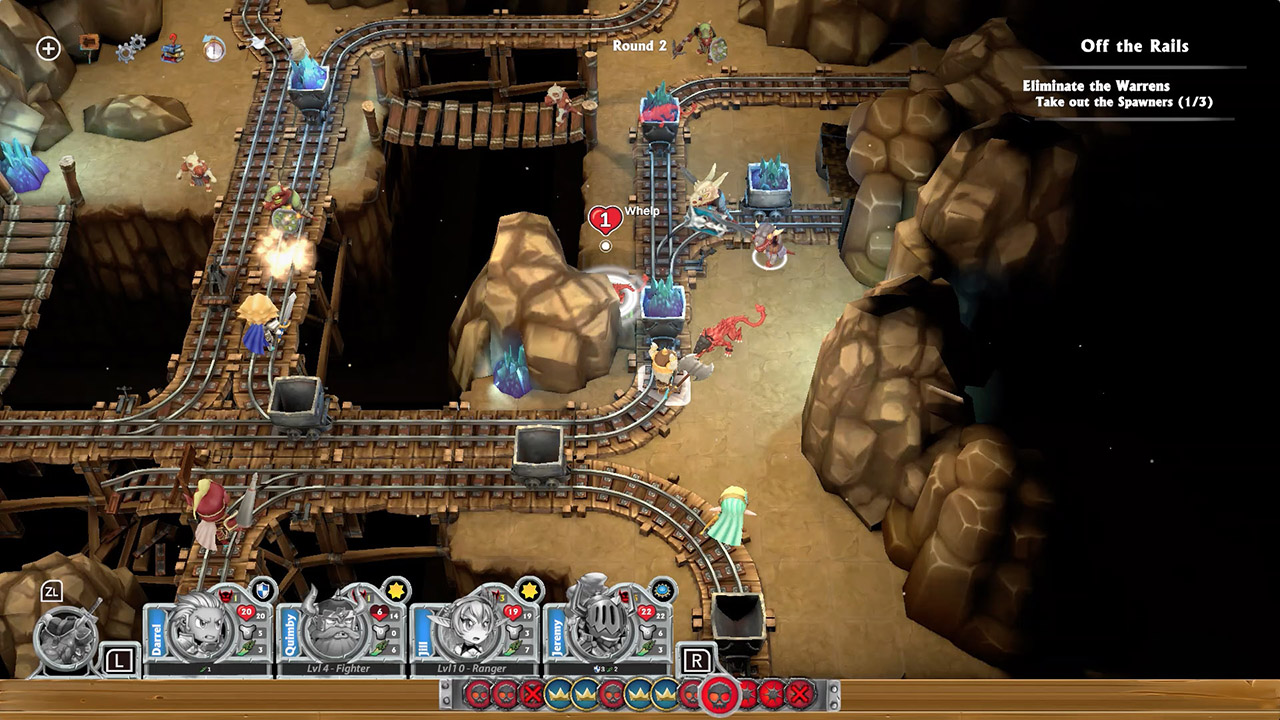 The origins of many role-playing games in today’s digital age of playing its form, heralds back to the days of table-top board gaming; especially in terms of turn-based combat or movement. What console or PC gaming brings with it though, is a fully-fledged world to explore that expands before your eyes, instead of trying to imagine the surroundings or environments you find yourself in. However, what is also did, was to nullify the element of luck that the physical editions of gaming presented, replacing it instead with an element of skill. It doesn’t take anything away from the enjoyment of playing such games, but without the element of luck, some of the urgency or reward associated with dice-rolling stats became lost.

That could be all about to change though, with the release of Underbite Games’ Super Dungeon Tactics as it rolls a release onto the Nintendo Switch. Loosely based on the mechanics of the board game Super Dungeon Explore, this digital version revolves around leading a party through the land of Crystallia, a kingdom formed of light and goodness. However, it’s creation also spawned a conflict, with a darker realm that shadowed Crystallia and an evil presence known as the The Dark Counsel. It’s twisted formation has spawned a series of monsters, whose horrific forms have spilled over to corrupt the land of light and taint it with its shadowy darkness.

Your adventure begins with a Hearthsworn Fighter and the Ember Mage, as you embark on a journey to help the besieged towns-folk, as well as develop your own guild in combating the threat to Crystallia. Told through a series of narratives and static art screens, the story plots out the themes of the your journey, as you work to figure out the mystery of the darkness and keep its evil minions at bay. However, as with most of the good table-top board games from the Dungeons & Dragons era, the main premise of the gameplay revolves around the exploration and combat of its mechanics, rather than involving too much into the story and backlore of the events you now find yourself in. Although the plot and theme is relatively engaging, don’t expect too much from this element of the game. However, within its other functions, Super Dungeon Tactics provides a compelling experience. 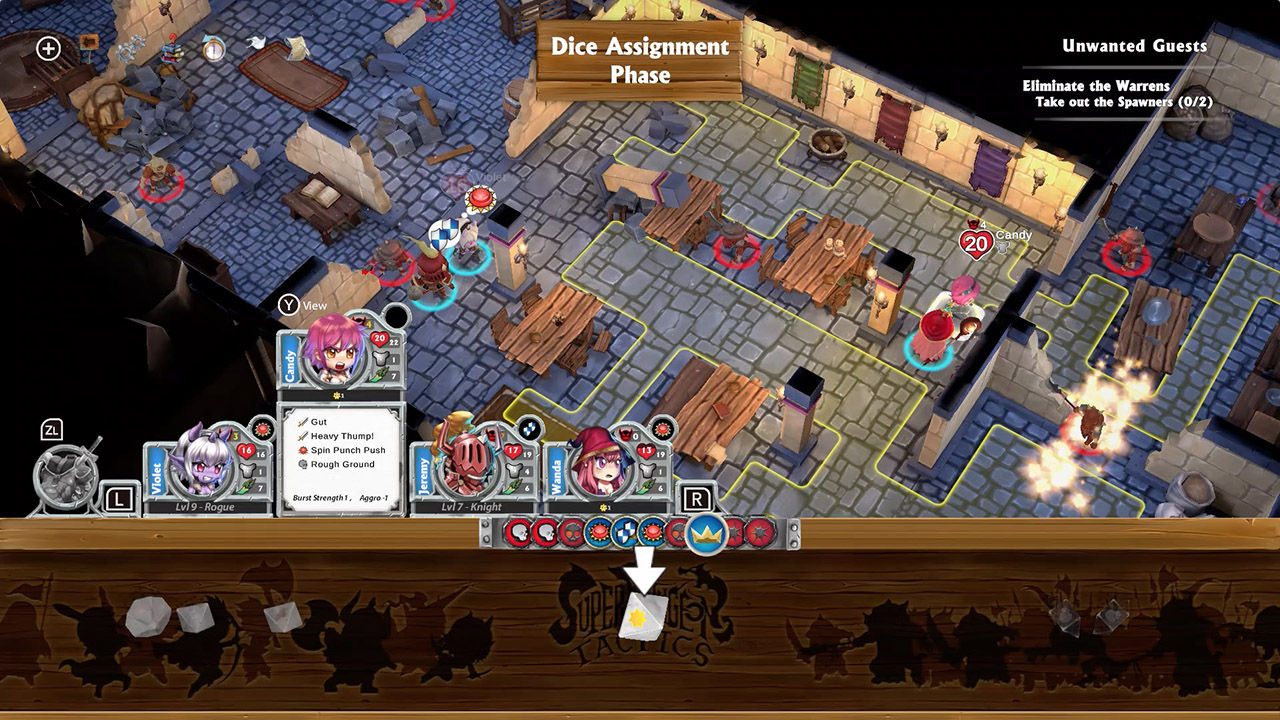 Movement and combat is of the turn-based variety. However, this doesn’t involve the restraints of moving one block at a time, or utlising the powers of one style of attack; instead opting for a grid-like mechanic in positioning and a variety of attack patterns in order to deal the most damage. This brings a very tactical feel to the proceedings, as in the majority of your battlefields, you will be severely outnumbered by enemy forces; a particularly punishing prospect that will make you pay for any mistakes you make in positioning your heroes. However, in an amalgamation of both the digital and physical formats of role-playing, Super Dungeon Tactics brings elements of skill, as well as a spattering of luck that forces you to think of how you play.

Before each round of movement and attack, you roll a series of dice which holds different values on each of their faces. Some grant boosts to attack or defensive stats, whilst others produce a detrimental effect to your heroes, whilst strengthening enemy types. This in turn forces you to strategise on how best to deal with your current circumstances. Should your dice roll produce a negative, then a defensive stance is required, just as any positives need to be used to your advantage in either holding the fort or pushing the enemy forces back. During the early stages of the game, with a starting party of only two heroes, this mechanic provides a nice learning curve in the tactical style of play that is required. However, as you progress, your party can grow in size, from a roster of fifteen various heroes, creating more urgency to the way that the dice rolls forces you play.

This style of gameplay produces a nice balance in skill, tactics and luck. This also becomes more accentuated through a variety of multi-tiered mission structures that forces you to split your party to accomplish your objectives in different areas of the map. However, successful campaigns rewards you with a variety of loot that determines character levels, meaning you can form a suitable party without the need of worrying about underlevelling or weaknesses within your squad. This mechanic of strengthening your party also plays a dual-role within the game, as with progression of character, comes progression of dice too; with various items and forms of apparel changing the face value of the dice you roll. 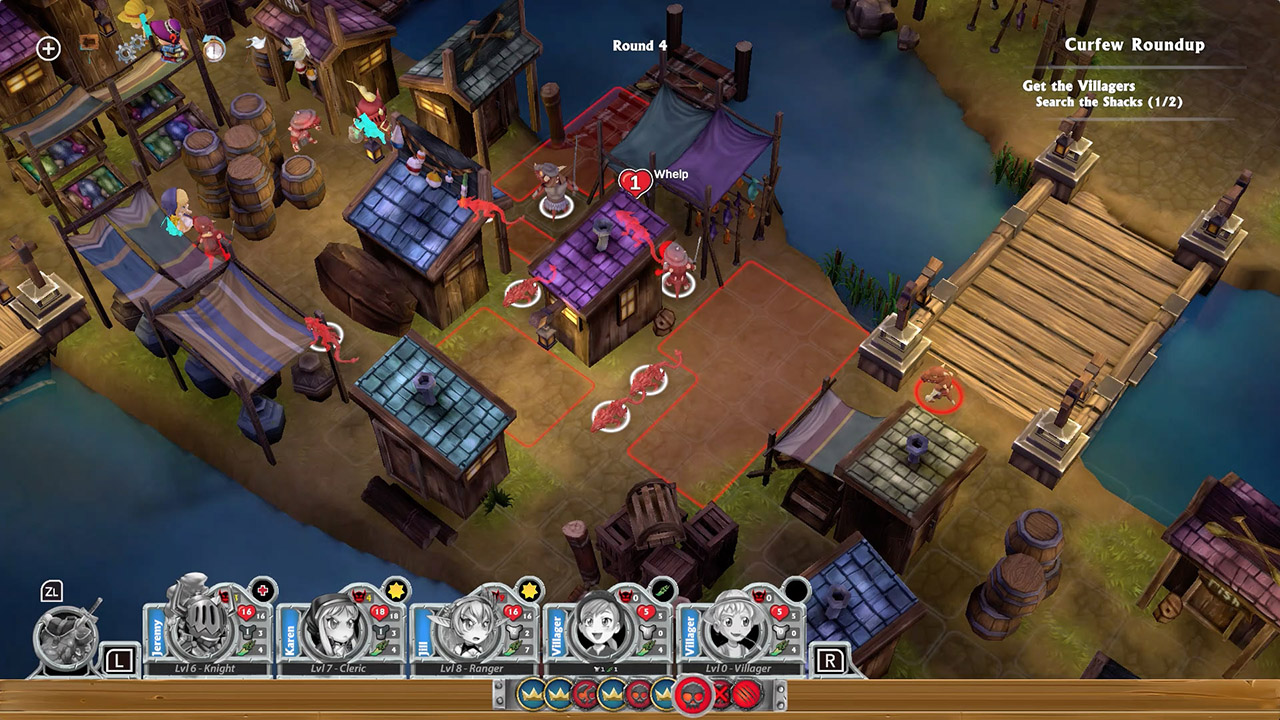 Despite its element of combat-driven gameplay being at the forefront, the presentation of Super Dungeon Tactics also produces a nice aesthetic, with detailed environments and character models; especially when playing with the Switch docked. However, viewed from a top-down isometric perspective with manoeuvrable camera angles, the viewpoints are positioned at an angle that feels too far from the action at times. Although you can zoom into the action, it fails to reach a middle-area in which to find a balance. This is further accentuated when playing on the Switch’s portable screen, as much of the statistical information is unreadable due to small nature of the font that is used. Although frustrating in its implementation, I can’t really say that it’s a game-breaker though, as even though I found it annoying, especially in trying to keep an account of my well-being, it wasn’t enough to stop me from playing.

Although it’s very easy to skip the story element of the game due to the way it’s presented, it does produce an interesting backdrop to the combat; one that can involve you in its themes and plot, creating a form of immersion that promotes a need to win through each of the battle scenarios, although I also have to admit that its abrupt ending leaves you feeling that there should have, or could have, been more to add in a form of more substance. Whilst it maintains a strong level of tactical play, the game also contains a lot of elements that make it a lot of fun. From the detailed environments to the easy-to-use combat menus, its accessibility makes it instantly playable with its satisfying blend of old-school and modern role-playing.

Overall, Super Dungeon Tactics presents a solid title that will appeal to fans of tabletop gaming and its more modern digital form of playing role-players. With around thirty hours of content, there’s a lot to keep you invested. However, if you’re looking for a story primarily, then you may be disappointed with the presentation of this part of the game. Saying that though, its production levels in gameplay, graphical depictions and capturing the essence of role/board playing are sublime with interesting characters and tactical combat that requires real skill; a deeply rewarding element when you are victorious. On the big screen, this game looks delicious, but playing in a portable environment can lead to some difficulty in making out certain stats or options with its unforgiving font size and distant camera angles. However, if you’re looking for deep and engaging tactical combat game with an element of luck within the rolling of dice, then this is a game that will satisfy immensely.

Old-School and modern role-playing come together in this tactically challenging digital board game adventure.