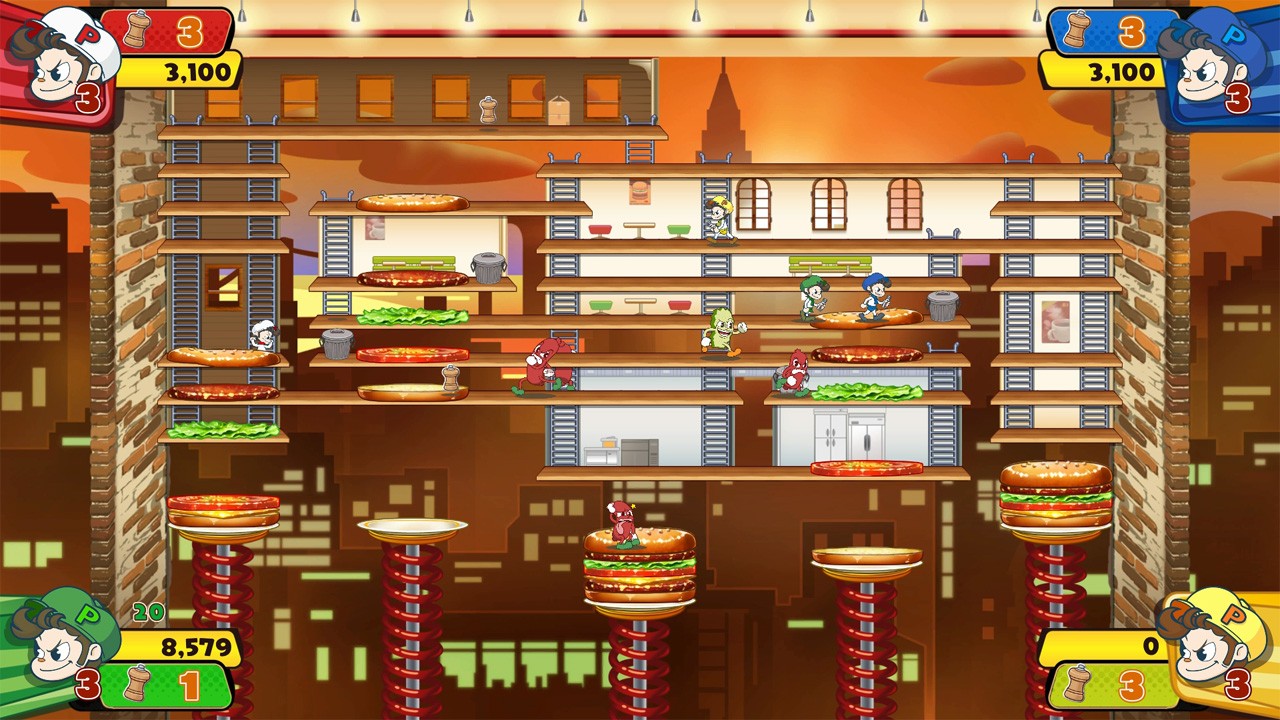 You never realize how nostalgic you can be until you get visibly excited for seeing the Data East logo. Even though I didn’t spend as much time in arcades as I would have liked as a child, Data East is still one of those heavy hitters from yesteryear that remains fond in my heart. In spite of the changing winds of gaming licenses and name holders, it’s cool to remember who came before and what they did, and, though Data East didn’t do a lot in this particular game, seeing them listed up top made me happy. Then I saw G-Mode, who has been handling all the Switch ports of the old school Data East titles, and I got more comfortable, and then, inexplicably, I saw X-SEED, which confused me. Then the graphics dropped and I got audibly more confused (as in I said, aloud, “What the hell?”). And then the truth dawned on me: this isn’t a port of some arcade variant I missed, but an actual, NEW BurgerTime game. What was this gonna be.

BurgerTime Party is looking to do three things, and it does those three things reasonably well. The first is to remind people that BurgerTime is a thing, and that a lot of people liked it, and you can keep enjoying that particular brand of gameplay (run over burger pieces to build giant burgers and not die) fairly well. The second was to try and bring Peter Pepper, the chef’s chef who runs this whole story, into the 21st century with updated designs, coloring, and mannerisms, to a point. The last is to make sure that we inject a healthy amount of multiplayer into a game, because that’s the way to make sure that a Switch title gets picked up by a handful of people with zero margin of error. The Switch was marketed as a multiplayer anywhere console, and by God we were going to make sure those options were everywhere, all the time, if you want to build burgers with a friend or not. The plot remains the same: Peter was trying to concoct the perfect burger and all the other food in the kitchen is now resentful of him for wasting their time and talents. Anyways, get ready to throw black pepper as effective mace and run over lettuce the size of a gymnastics pad, because it’s BurgerTime. 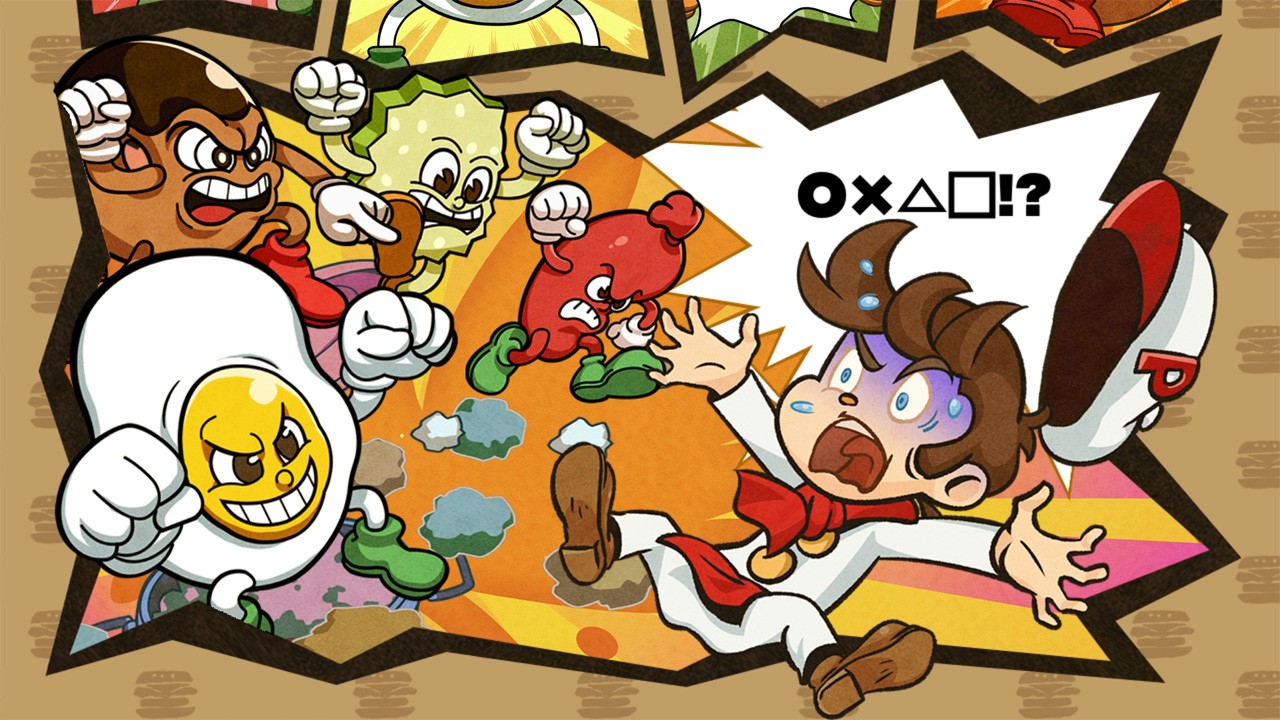 At the core, BurgerTime Party is an extension of the original game (not Heavy Burger, sorry folks), and that means that the same pluses and minuses exist from fundamental gameplay standpoints. For example, if you think that the concept is fun of not being able to jump but still needing to access multiple high-rise areas through ladders, falls and well-timed stunning of the enemy, then you’re in luck, because it continues. BurgerTime Party contains a wellspring of new puzzles and level designs that gradually increase in difficulty to give newcomers a much better chance at survival than the original. Given that BurgerTime was an arcade game that needed quarters to survive, it’s no surprise that this console-based sequel is more forgiving, asking players to only build a couple of burgers at first and scaling upward as you get a better understanding of the game. Moreover, you need to do the first five stages to unlock anything else, so it serves as both an accomplishment milestone and a tutorial all in one. You learn what you need: top layer will knock down middle layers, falling objects can crush enemies and give you extra points, and black pepper will stun but never fully incapacitate enemies, so you need to learn how to time things out well.

Additionally, G-MODE has baked in some of the replay-centric ideas that we learned from our mobile players over the years. For example, there is a tenuous balance between points and the star rating per level, which compels players to go back and try again if they aren’t successful at getting full marks the first time through. Again, the early stages are very, very forgiving with awarding the stars, but you need to slowly start to plan things out better. Finishing fastest isn’t always the surefire path to greatness, and so you’ll need to revisit and think again, considering if you can make a great crush combo, or if you can risk your life to try and get everyone lined up in a single strike to maximize mayhem, Points are great and have always been the backbone of player achievement, but the star system, as a more visual, scaled chart, works best and also creates more concrete satisfaction rather than “I can do 100 points better next time.” 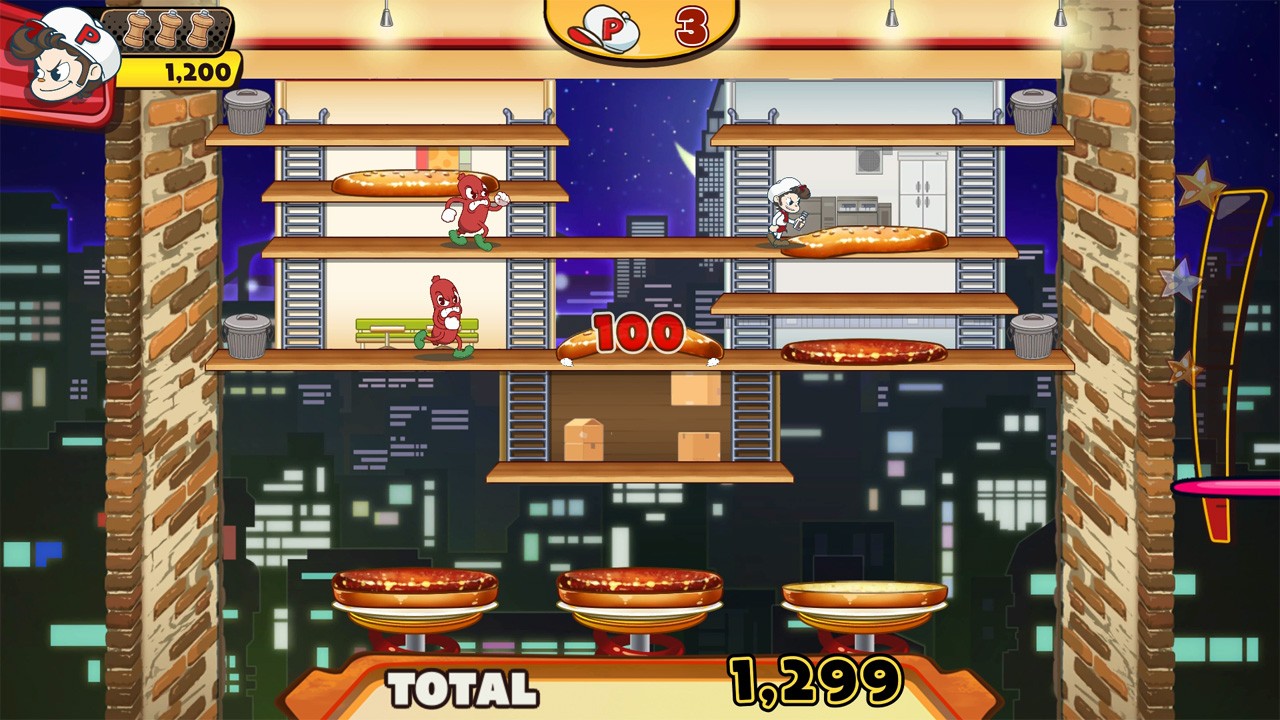 Since the game is noncombative in nature, bringing the world of BurgerTime to a multiplayer forefront feels strange, but works out surprisingly well. The Party aspect puts players in a light, competitive atmosphere where you get those sprawling stages that we saw in the arcade days, and it translates beautifully to having up to three other friends on screen. It’s entirely in the players powers to decide how the game will be, though competitive elements are the key to enjoyment at the root of it all, so don’t think you’re doing anyone favors by “helping” your friend or sibling in this frantic fry cook fight. BurgerTime Party’s simplistic controls make it so a singular JoyCon is more than enough to “handle” what’s expected for the players, so don’t worry about needing to pack additional, 3rd party attachments for maximum enjoyment, Just grab a JoyCon and enjoy the ride.

The art styling of BurgerTime Party is the only place where I really take umbrage. Naturally, we can’t just stick to the old school, clunky graphics that were capped out on cabinets and 8bit consoles the world over: why bother doing a new version if it looks completely the same? However, the new design of Peter Pepper, the different foods and even the burgers themselves feels far too “quirky” and peppy to appeal to the generation that enjoyed this game. After a few plays, I realized that the facial characteristics are capturing a lot of the same notes that the Cuphead devs brought onto their game – the larger eyes, the bouncy sort of body movements, and the stretched out proportions of limbs. However, since Cuphead kept the game in black-and-white, it maintained the retro illusion while allowing players to focus on the difficult gameplay and brilliant boss mechanics. By comparison, BurgerTime Party thrives on the way that players can interact with the game, and, given that the concept is woefully repetitious (run over burger pieces, don’t die), your eye ends up being drawn to the characters (as the backgrounds are all the same) and it clicks that the way these characters are shaped really doesn’t translate as well in color. It’s very off putting, almost like their caricatures, and I didn’t care for it at all.

Still, if you can get over the visual hump of it all, there is a lot, and I mean a LOT, of burger goodness in this game. The new puzzles alone are numerous, but then you have some of the original levels brought back for solo or multiplayer action, and the replay value with friends increases the longevity of this game about tenfold. If you’re someone who really enjoyed the adventures of Peter Pepper, or just generally likes running over food in order to eat it, you might find joy and plenty of gameplay within. If you’re looking for something more difficult than “mace the sausage before he gets you,” then I’m afraid to say that shop is closed.

A bit quaint and faithful to the original, BurgerTime Party maintains the Pepper legacy but seems to have a very odd aesthetic at the forefront.