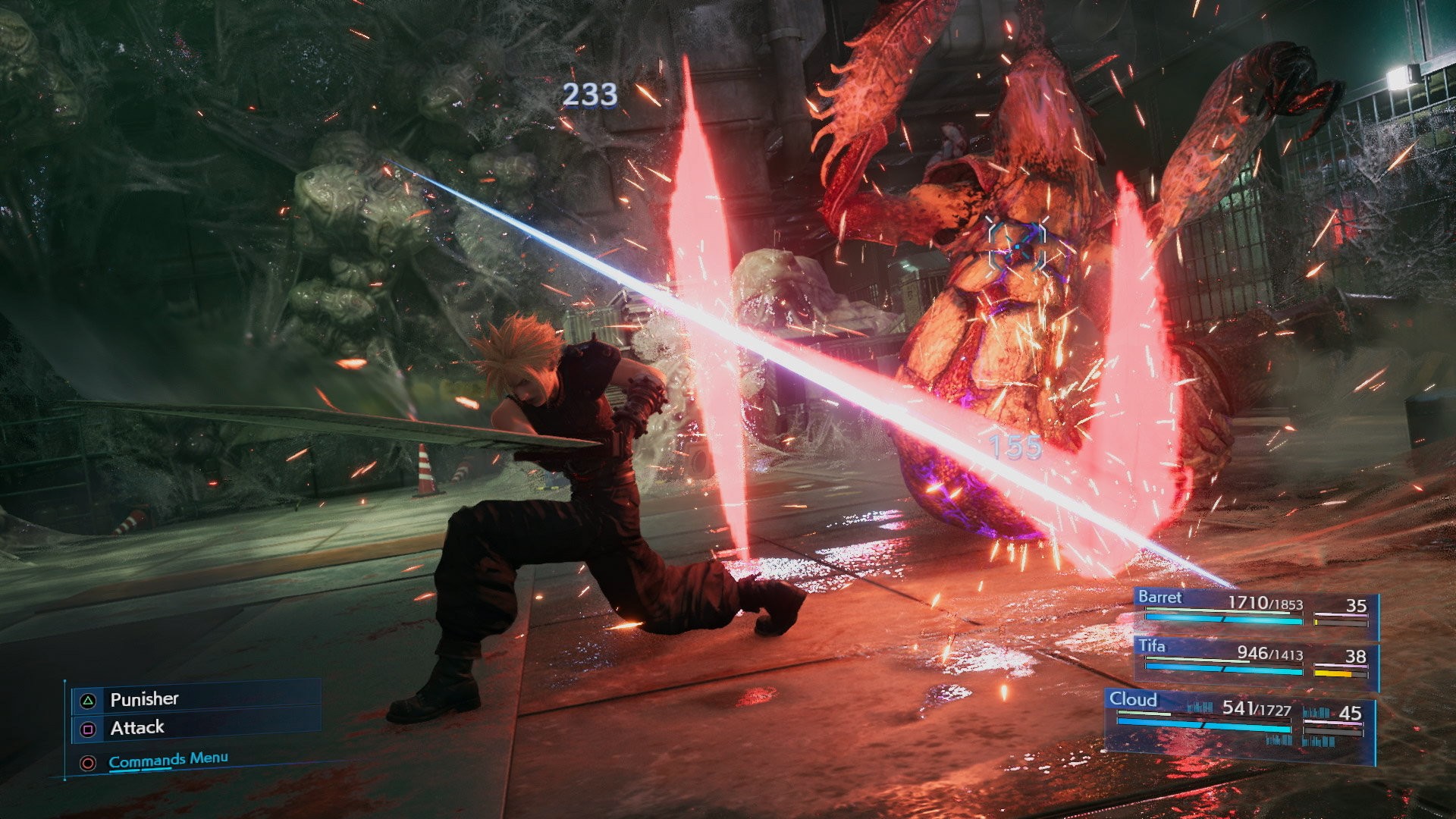 Final Fantasy VII Remake is, as the title suggests, a remade version of the classic 1997 JRPG of the same name. Completely remade from scratch by Square-Enix, the game re-imagines the original version’s story while expanding on many of its elements. This release serves as part 1 of the remake, it’s going to be a huge project overall which will be released in multiple instalments. This part covers the story up until the characters leave their home city of Midgar, setting up their adventures in the outside word.

Final Fantasy VII Remake is set on the planet Gaia, and the story follows Cloud Strife, an ex-soldier who is now working as a mercenary in the large city of Midgar. Midgar is one of Gaia’s biggest cities, and it’s mainly run by the massive Shinra Electric Power company. Shinra were hailed for harnessing the power of Mako energy and turning it into electricity, providing it to the masses and improving their lives. The dark secret behind it all is that Mako energy is actually the lifeblood of the planet, and once it eventually runs out, the planet will die. Although some view this process as a necessary evil, a group of activists called Avalanche begins taking action against Shinra. Labelled by Shinra as eco-terrorists, Avalanche goes about obstructing Shinra’s work, and eventually starts plotting to destroy the Mako reactors that power the city in order to save the planet. As Final Fantasy VII Remake’s story begins, Cloud has just joined Avalanche on their latest mission, to blow up the sector 1 reactor. Little do they realise that what happens next is going to change their lives and the fate of the planet forever.

Final Fantasy VII Remake’s story will be immediately familiar to those who have played through the original game, but there are still plenty of surprises in store. Rather than a straight retelling of the story, Remake brings us a re-imagining of the original game’s story, featuring an expanded version of the plot as well as many new scenes. These scenes take place in between the main plot points of the original version, and do a great job of further fleshing out the setting and characters. They also help to clarify some of the more convoluted aspects of the original story, adding more detail and better showing how these things impact the city of Midgar and its people. Midgar feels like a living, breathing city this time, rather than just a bunch of city and slum themed screens that you pass through on your way to the next part of the game. 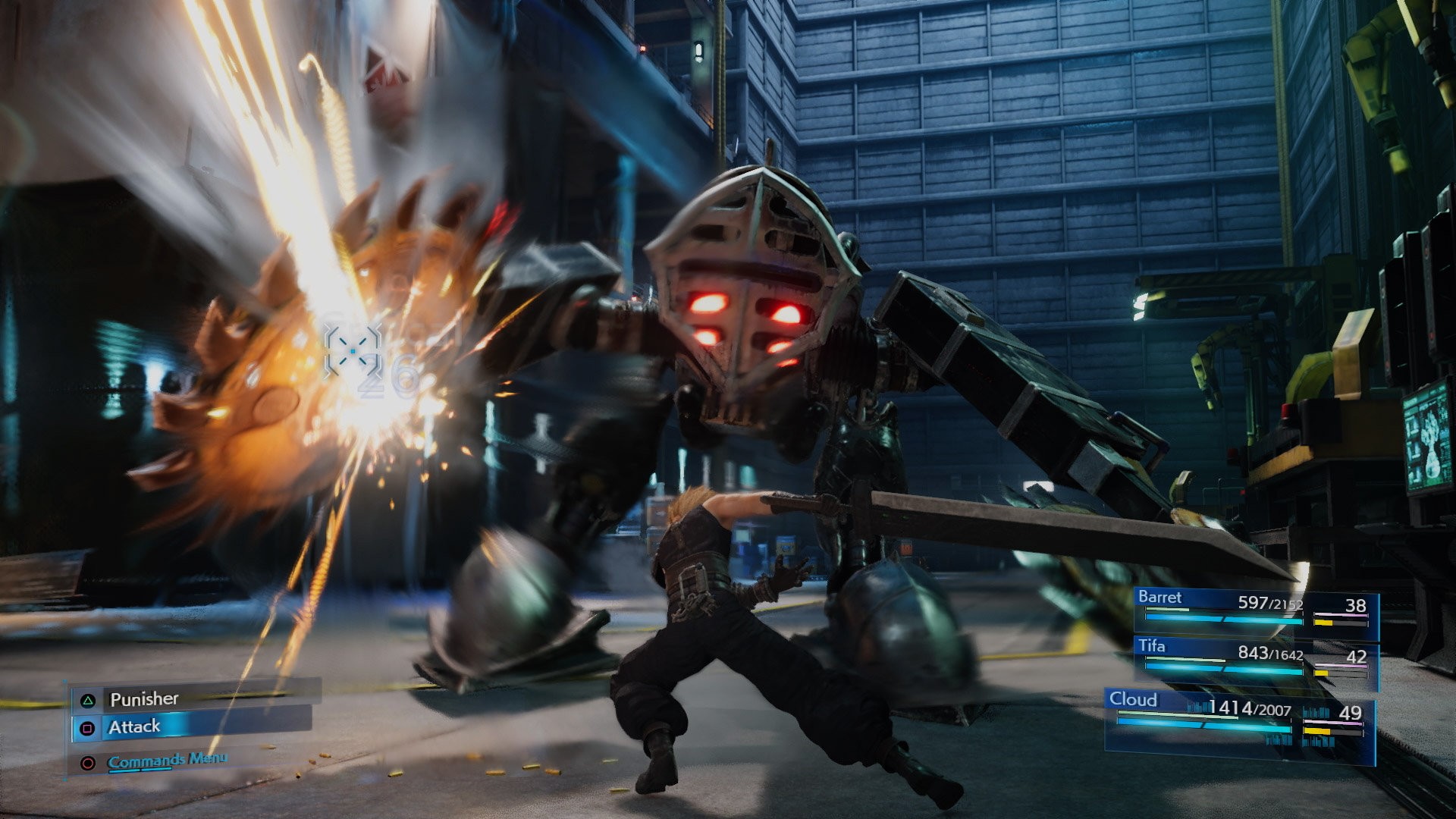 Final Fantasy VII Remake’s biggest departure from the original game is it’s battle system. Rather than having random encounters, enemies wander around on the environments and can be avoided in some cases. Getting within a certain distance of an enemy will seamlessly initiate combat. Rather than the turn based system seen in the original game, Final Fantasy VII Remake features real-time combat similar to an action RPG. Up to three of your party members will engage in battle simultaneously, with the player only directly controlling one of them at a time. All characters can perform a simple attack combo, using the square button, while the triangle button allows them to activate their unique ability.

For example, Cloud’s, allows him to change the way his weapon strikes enemies, going from focused strikes that hit a single enemy to wide swings that can hit multiple. Meanwhile, Tifa’s ability allows her to power up her punching attacks and turn them into stronger strikes. Dodging is done using the circle button, with careful timing required to avoid some of the enemy’s more damaging moves. What sets Final Fantasy VII Remake’s combat apart from other action RPGs is the ATB system and command menu. These elements were taken directly from the turn based system of the original, and allow each character to access a wide range of abilities and magic. As each character attacks, they rapidly fill up their ATB bar. Once they have at least one bar filled, the player can press the X button to bring up the command list. Doing so pauses the combat, giving the player time to think as they pick a special ability or magic spell to cast.

Like in the original game, magic and special abilities are equipped to characters using the Materia system. Materia are special items that can be either bought or gained as rewards, and each one grants an ability to a character when equipped. This includes magic of all elements, healing spells, and special abilities that can do things like reducing elemental damage taken, or letting characters learn attacks from enemies. There are also special Materia that contain summons, powerful creatures than can be brought into battle to fight alongside your party members for a limited time. Doing so is only possible during certain tough battles, but they have their own sets of powerful attack commands, making them very helpful allies. They also perform a very flashy final attack when they leave, doing massive damage to enemies. 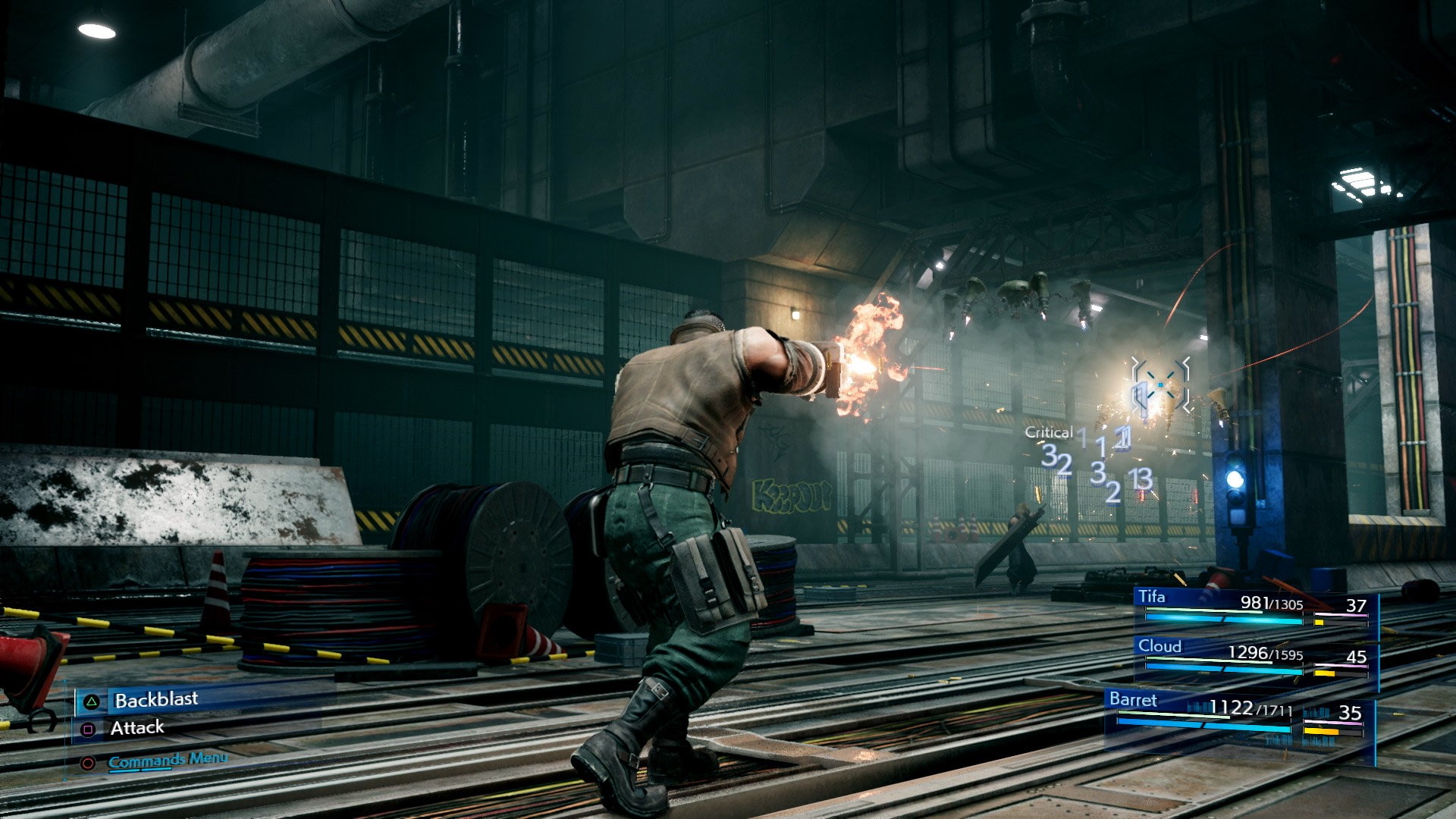 Visually, Final Fantasy VII Remake is a real treat. Square-Enix have taken the simple, low polygon character models of the original game and turned them into gorgeous, detailed new versions. The way that the characters have been brought to life here is impressive, and will be sure to please even the most die hard fans of the original game. Final Fantasy VII Remake’s story takes place across many different environments, and they all look amazing. The contrast between the run down slums of Midgar where the poor people live versus the shiny, high tech upper area (suspended way up in the air and reserved for the rich) is visually interesting. During battle, the spell effects for each element look great, with top level spells being quite spectacular. Highlights are fire, which produces a large explosion of flames, and ice which produces a huge icicle that damages foes. The only minor negative is that there’s a few low resolution textures in a couple of the game’s areas. Most of the time they’re not noticeable, but they do pop up occasionally.

Final Fantasy VII Remake’s audio also doesn’t disappoint. The game features an extensive soundtrack, including newly orchestrated versions of the music from the original game. There’s a lot of it, and it all sounds great. The remake also features full voice acting, unlike the original, which had none. The voice cast have done an overall impressive job of bringing the iconic character to life, and the dialogue is well written and entertaining as a whole. Final Fantasy VII Remake is just as good to listen to as it is to look at.

Overall, Final Fantasy VII Remake is an excellent re-imagining and modernisation of a classic Japanese RPG. The graphics are impressive, the soundtrack is robust and features many new versions of iconic songs, and the expanded story feels familiar yet fresh. In addition, the battle system is a great mix of old and new, bringing a unique take on action RPG combat. Although this is only part 1 of the remake, you’ll get plenty of bang for your buck. Make no mistake, this is still a full Final Fantasy game, lasting around 45 hours if you explore and complete all of the side quests. Square-Enix have created an amazing experience, one that both veterans and people who are new to Final Fantasy VII’s world will enjoy. Here’s hoping that the second part of the remake proves to be just as good.

Final Fantasy VII Remake is an excellent re-imagining and modernisation of a classic Japanese RPG. The graphics are impressive, the soundtrack is robust and features many new versions of iconic songs, and the expanded story feels familiar yet fresh.