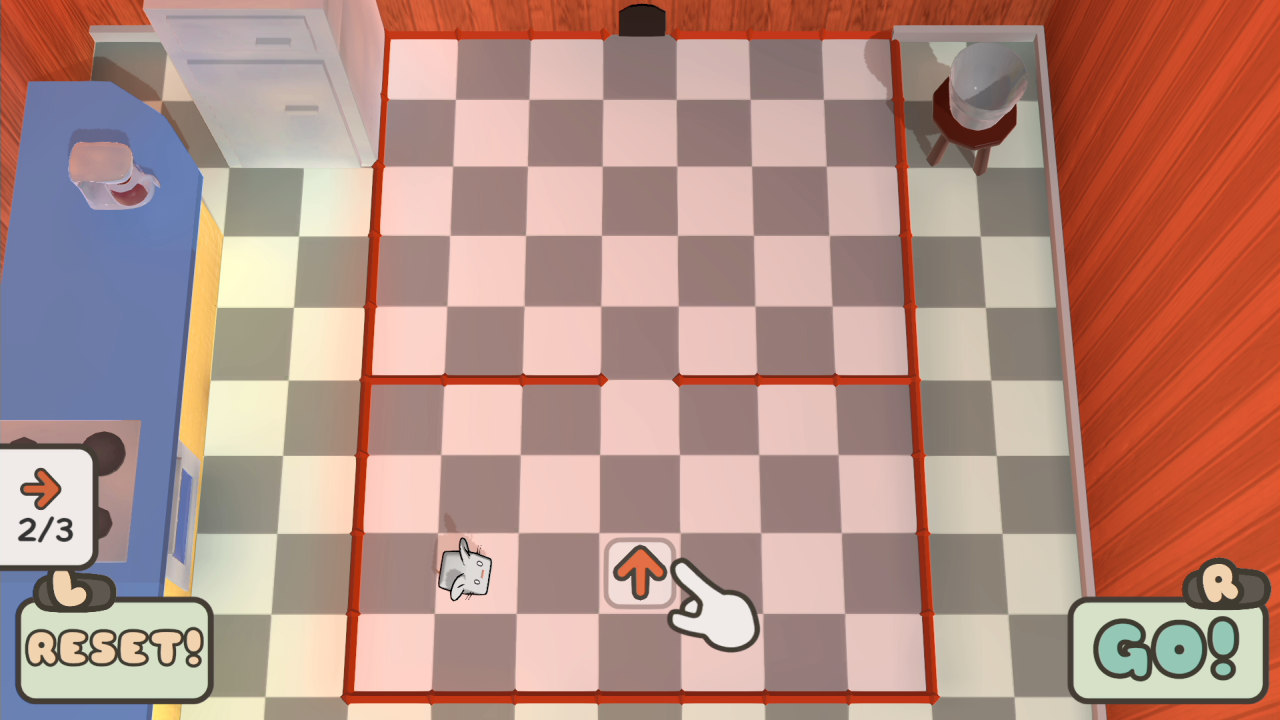 Have you ever met someone who was incredibly, undeniably enthusiastic about something you’ve never heard of in your life? This isn’t a matter of socially awkward commentary or to pick on people with obscure hobbies; it truly is fascinating to encounter a person who is neck-deep in a culture, a game or a viewpoint that you had never considered in your life. These people explain and expound on their passion with vigor and certainty, painting pictures and describing things you had never considered but are now totally on board with hearing more about. I’ve had people talk to me about geocaching, making yurts, urban exploration and freecycling, and, as long as they can do it without being judgemental of my disbelief or just general ignorance, it becomes a really cool lesson about how different the world is. As strange as that sounds, this is exactly how I felt after my experience with Blobcat.

Blobcat is a puzzle game featuring, at its core, two different beings: the DiceMice and the Blobcats. The DiceMice simply want to get back to their mousey holes and live safely, entirely uneaten by the BlobCats. The BlobCats, as you may expect, are pretty keen on eating the cubic rodents, and thus the premise of the game is born. The mice and cats both can only move in a straight line, instinctively turning when they hit a wall and continuing on until one of three conclusions happens: a mouse is eaten; a mouse gets home; or a cat gets stuck in the mouse-hole. Any one of those could be the case, and, as the levels expand to include more cats and more mice, you start to realize that maybe the mice need to relocate to a new, safer home; somewhere far away. 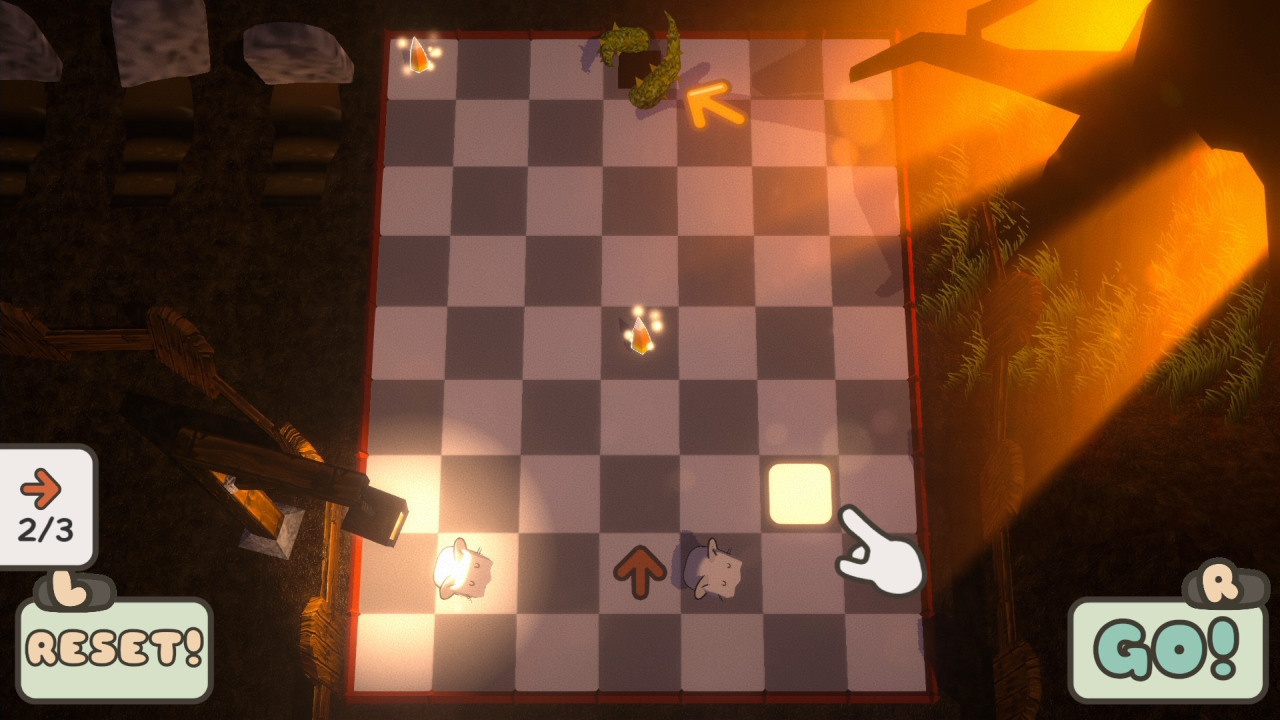 On the surface, BlobCat looks a lot like a fantastic puzzle game from the Dreamcast heyday, Chu Chu Rocket. The key mechanic, putting down arrows to direct where the mice and cats should run, certainly feels familiar (and absolutely screams “TRIBUTE” in the multiplayer mode), but there is, thankfully, a lot more than that. The first “world” of BlobCat is the only one that is simple enough to boil it down to cat and mouse influence: as soon as you unlock the second world, environmental hazards become both a boon and a bane. The second world, for example, is a Wild West arena, complete with minecarts that can be adjusted prior to starting the match, and they can act as appropriate bumpers or buffers, depending on where you put them. Additionally, there is a cute sticker collection “prize” for being able to achieve three stars on each stage, and players who are worth their salt will want to double down and try to get these adorable stamps to add to their collection. Three stars, by the way, will come from proper execution and handling of the mice, using as few of your limited arrows as possible in order to get to the goal. Naturally, if you’re just trying to live another day, you can use all the arrows and make the easiest, potentially most convoluted path possible, but the shame of a single star will compel you to come back and try again in the future.

BlobCat has a really good mixture of difficulty and “eureka!” moments in each of the puzzle stages. Players will, naturally, want to let the level run without any interference at first to see where the cat and mouse paths will lead, and, from here, begin to tinker around with what’s going to be the tunnel to freedom. Bysamb, the developer, has done a great job of mapping arrow placement to a combination of left and right joysticks, making placement and removal and effortless task, allowing for quick and succinct choices within the stage. There are still a couple of levels that had me scratching my head for upwards of fifteen minutes before the solution presented itself, usually in the form of my beloved family pointing out an obvious tile that I had continued overlooking. By the way, Bysamb, if there’s a way to buy these BlobCat stickers in real life, I got a couple of fans who’d love to have them on their notebooks.

Even if things may feel very familiar to fans of Sega’s last great console, there’s enough genuine and earnest input in the form of original design to make anyone happy. None of the stages feel like Chu Chu clones, so I can’t just reference my old VMU and find out the solution. Additionally, the characters are seriously cute: BlobCat is a great mascot, and seeing the DiceMice dress up based on the atmosphere of each new world is a visual treat. The animations of BlobCat being stuck in the mouse-hole, butt in the air, or satisfyingly rubbing its stomach when a mouse is caught is adorable, if infuriating. And it all plays along in silky smooth form, with no stuttering or skipping, despite it being a PC port. It looks like we’ve got a full 60fps, and the game really delivers in a big way when things on the screen are getting a bit hairy. 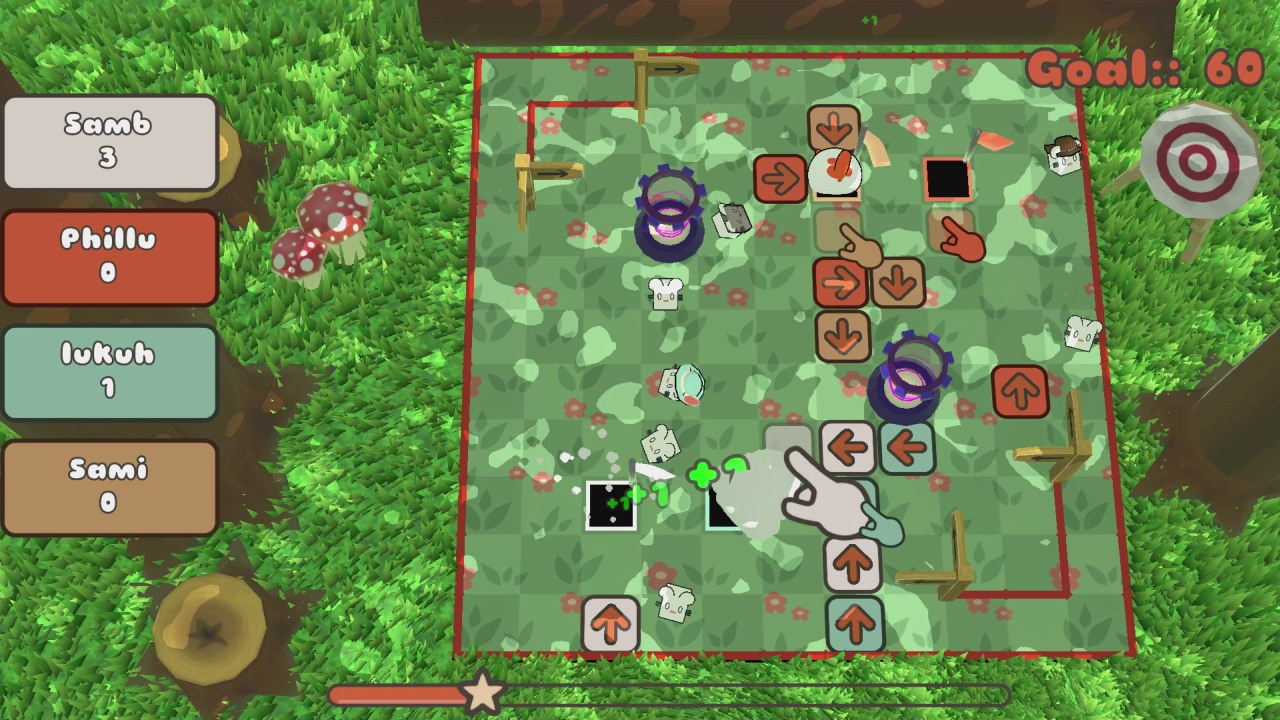 Speaking of PC ports, you should know more about the BlobCat multiplayer. Either local or online, up to four players need to use their own skills and dastardly plans to direct the cats towards opponents’ DiceMice in order to secure their own mices’ escape. This is a much more frantic approach to the game than the single player, which only allows you to drop directional arrows prior to the word go. Having a bunch of people dropping arrows all over the place to either get points for themselves or deny others is a hilariously insane setup, and it’s something that nearly anyone can get behind in the blink of an eye. And, for those concerned about the number of players, the developer has impressively gotten cross-platform support going, so the handful of avid fans on the PC will be able to join their new Switch brethren on the kitchen battlefields. With being able to simply share your “room number” with other players, it’s a cinch to drag friends into your playground, and you should definitely do so if you know anyone playing BlobCat.

It also should be noted that the developer has hinted at even more content coming in the future with additional costumes, multiplayer maps and potentially single player maps depending on the reception from the fans, which seems fair. Some people believe a development team should add additional content regardless of sales, but let’s be reasonable: if you’re making a product, and that product isn’t really selling well, and there’s no reason behind it other than “people aren’t playing,” why should you dump your time and money into that title instead of finding something else that people like? This is a great chance for players to vote with their wallets and show some love for a game that they enjoy. If BlobCat tickles your fancy, do everyone a favor and buy a copy to promote the idea of an indie title doing well on the Switch. Sure, many are doing great, but there seems to be this voice that’s echoing across the forums of there being too many casual titles on the Switch; and that’s just simply being ignorant.

BlobCat has a seriously diverse number of stages, plenty of replay value, a fun multiplayer experience and a great usage of a cute mascot while still having substance to back it up. If you were a fan of Chu Chu Rocket back in the day and don’t have the long-since-abandoned port on your iPhone, I would highly recommend checking this out. It’s clever, it’s enjoyable, and the DiceMice are the perfect little heroes to root for.