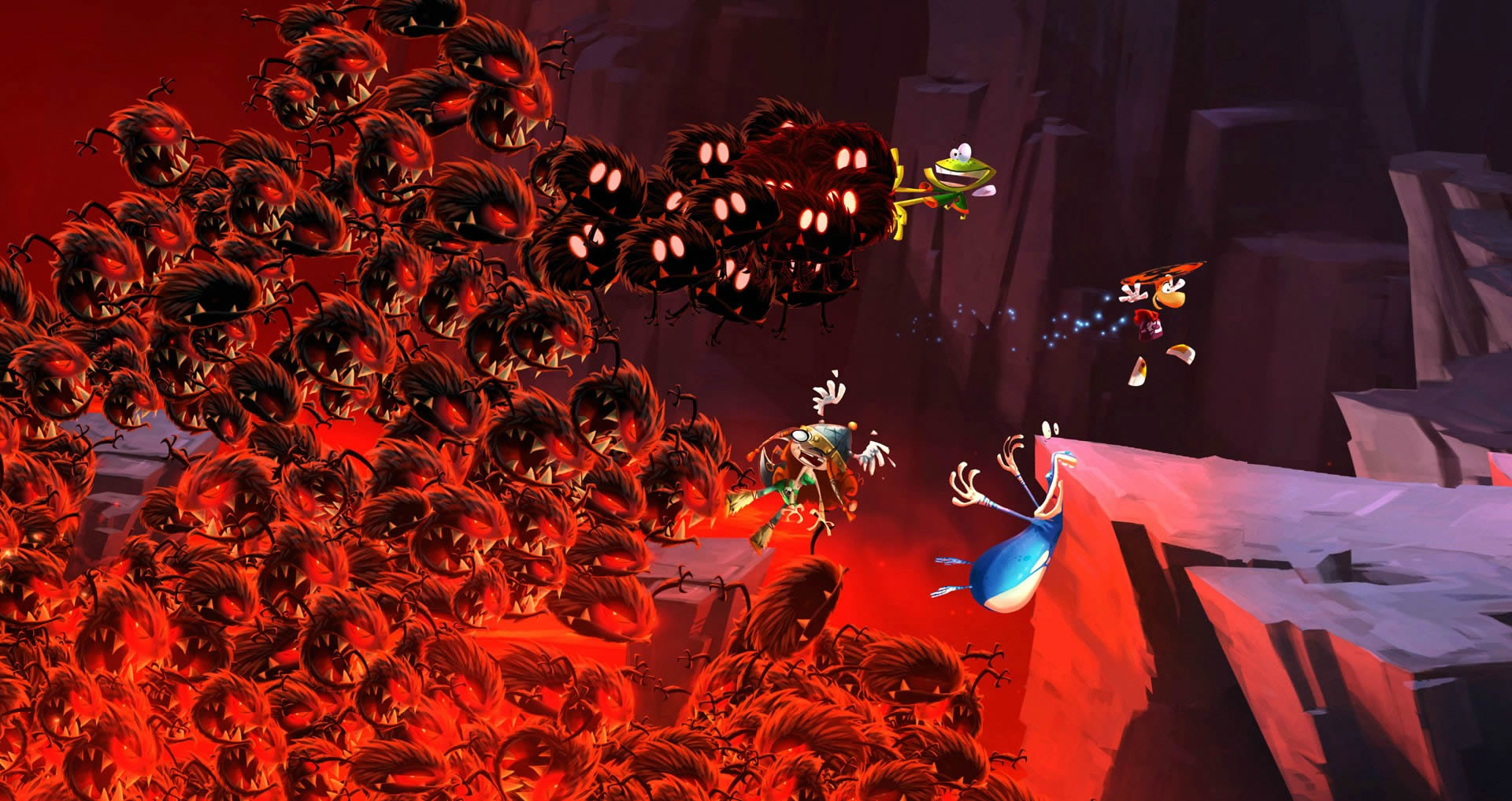 Since the advent of XBLA, PSN and the Nintendo e Shop etc, the industry has been somewhat inundated with side-scrolling platformers, and while many have arrived with a host of new ideas and an array of unique concepts, none have matched the purely technical pleasures provided by Nintendo’s portly plumber. Simply put, no game has come close reproducing the famous Italian plumbers sublimely weighted jumps and uncanny connection to the world around him, and, in fairness, neither does Rayman Legends. Like its forbearer, Rayman Origins, Legends delivers very tight controls and a relatively pleasing sense of weight that surpasses the majority of its peers without ever quite matching the peerless controls at the very heart of each and every Mario title. What it does have though is a sense of flair and incessant inventiveness that leaves recent 2D Mario titles in the shade.

While Origins arguably had Mario beaten already (his recent 2D outings anyway), Legends seals the deal with Ubisoft Montpellier creating what is unquestionably this generations finest 2D platformer. Origins was a great game, but Legends is so ludicrously, consistently fantastic and so outrageously generous that it makes even its illustrious predecessor look vaguely average by comparison. Ok, so perhaps that’s a little unfair given the quality of Origins, but seriously, this is one heck of a game.

Originally planned as a Wii U exclusive, the game has, somewhat famously, been victim to a rather lengthy delay in order to extend its release to 360 and PS3, and while they are both fantastic games in their own rights, neither quite match the brilliance of the Wii U version……if you’re playing with friends that is. On your tod, the 360/PS3 versions could arguably be hailed as the number one choice for multiplatform owners, but if you’re likely to play Legends with a friend/friends in tow (without question the best way to experience Rayman Legends), then the Wii U should be your platform of choice. 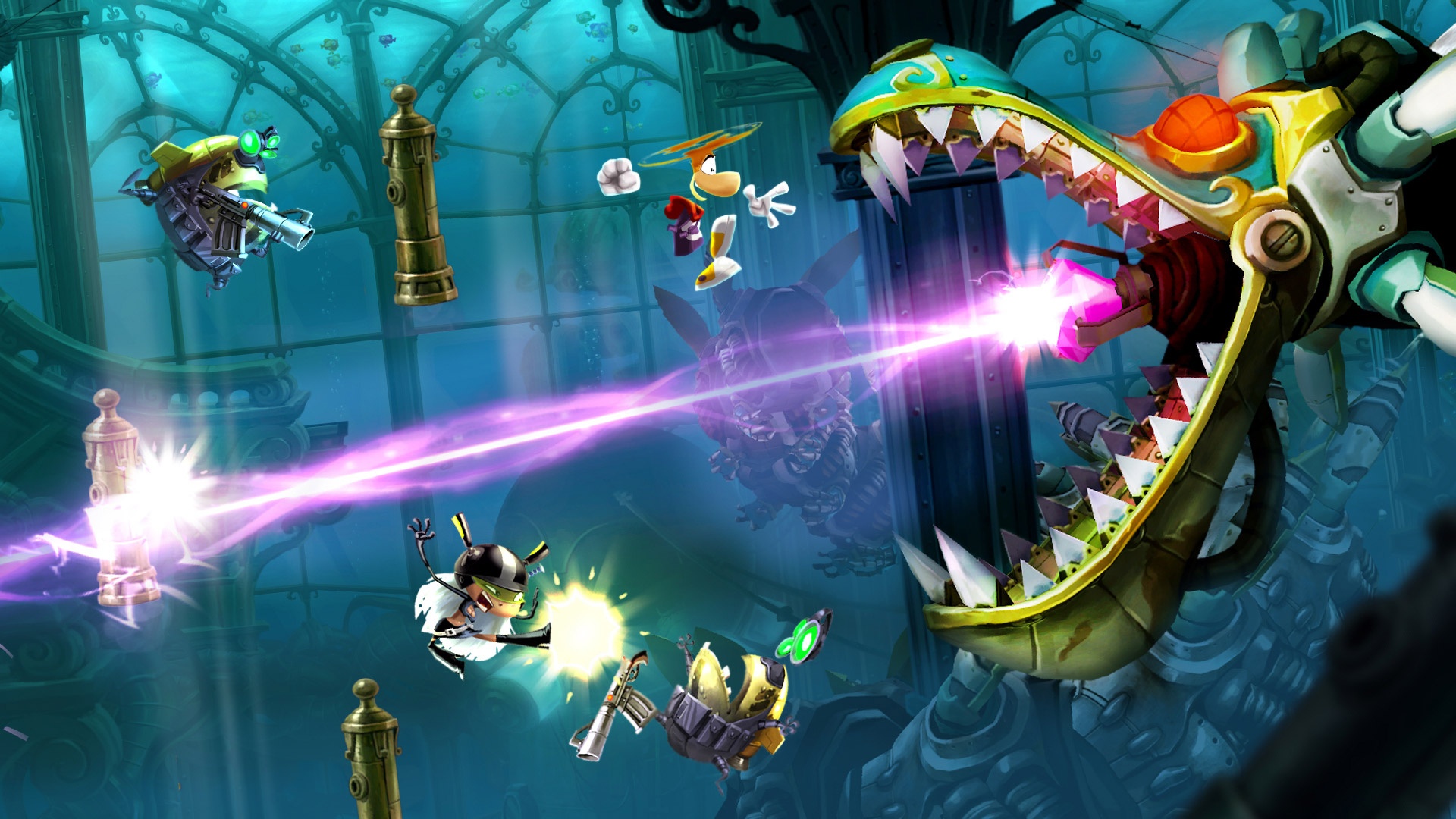 In fact, Rayman Legends, outside of perhaps ZombiU, is one of the finest examples of a developer putting the Wii U’s unique but, to this point, largely underutilised control scheme to good use. In Murphy, what appears to be a flying frog (nothing makes sense in the truly bonkers world of Rayman), the player with the Gamepad has the job of moving the world around the other players by grabbing and swiping on certain items. Whether it be a helping hand or a hilarious, but often truly infuriating last minute platform move, the user holds a great deal of power over those left with the more traditional control set-up. It’s great fun and gives less skilled players a chance to get involved, even if some of the later levels require a fair bit of skill and timing from the Gamepad user. Sure, Boost Mode in Mario U had a similar mechanic, but here it feels like a genuine part of the games design and, when played with friends, is something that is certainly missed on the other platforms.

To Ubisoft’s credit though, they have smartly worked their way around the lack of Gamepad controls on other platforms to the point in which, if you weren’t aware of the Wii U version, you would swear that it was built from the ground up for the platform in question, as is the level of quality on display. But again, if you do have a Wii U, I implore you to pick up what was always the original vision for this excellent game. 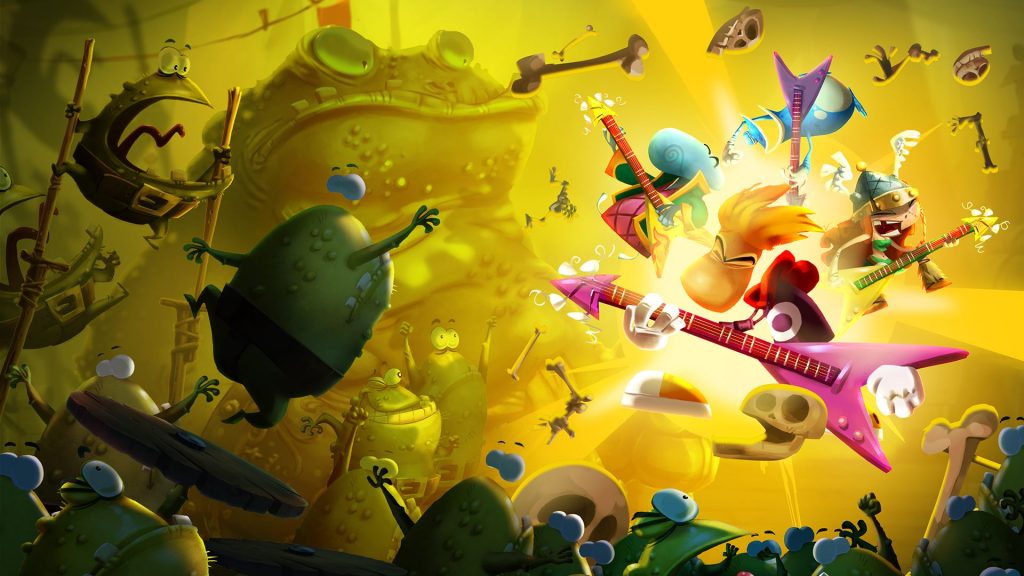 As anyone who played the excellent Origins will attest, the in-house Ubi-Art Framework does an amazing job of bringing the vibrant, cartoon world of Rayman to life, and while, at a glance, Legends will look much the same as its predecessor, as you play, you will begin to notice the additional depth that has been added throughout with characters jumping deeper into the screen and enemies subsequently coming from the background and foreground. Admittedly, things can become a bit cluttered if playing with 3 friends (4 if you’re playing on Wii U), but it’s a small price to pay for a world as rich in colour and character as this. It may not have the nostalgic romance that invariably comes attached to any Mario title and perhaps lacks the coherency of the Mushroom Kingdom, but in terms of sheer artistic imagination, Rayman Legends is in a league of its own.

With all of the levels, daily challenges, mini games and collectables you could ever wish for, Legends also happens to be one of the most generous video games of the generation with enough content to keep you busy for weeks, or even months on end. More importantly though, that quantity never feels like it has come at the expense of quality with levels and challenges that are varied, exciting and unique from beginning to end. Throw in some truly exceptional boss fights and musical levels that will have you grinning from ear to ear and what you are left with is a genuine contender for game of the year.