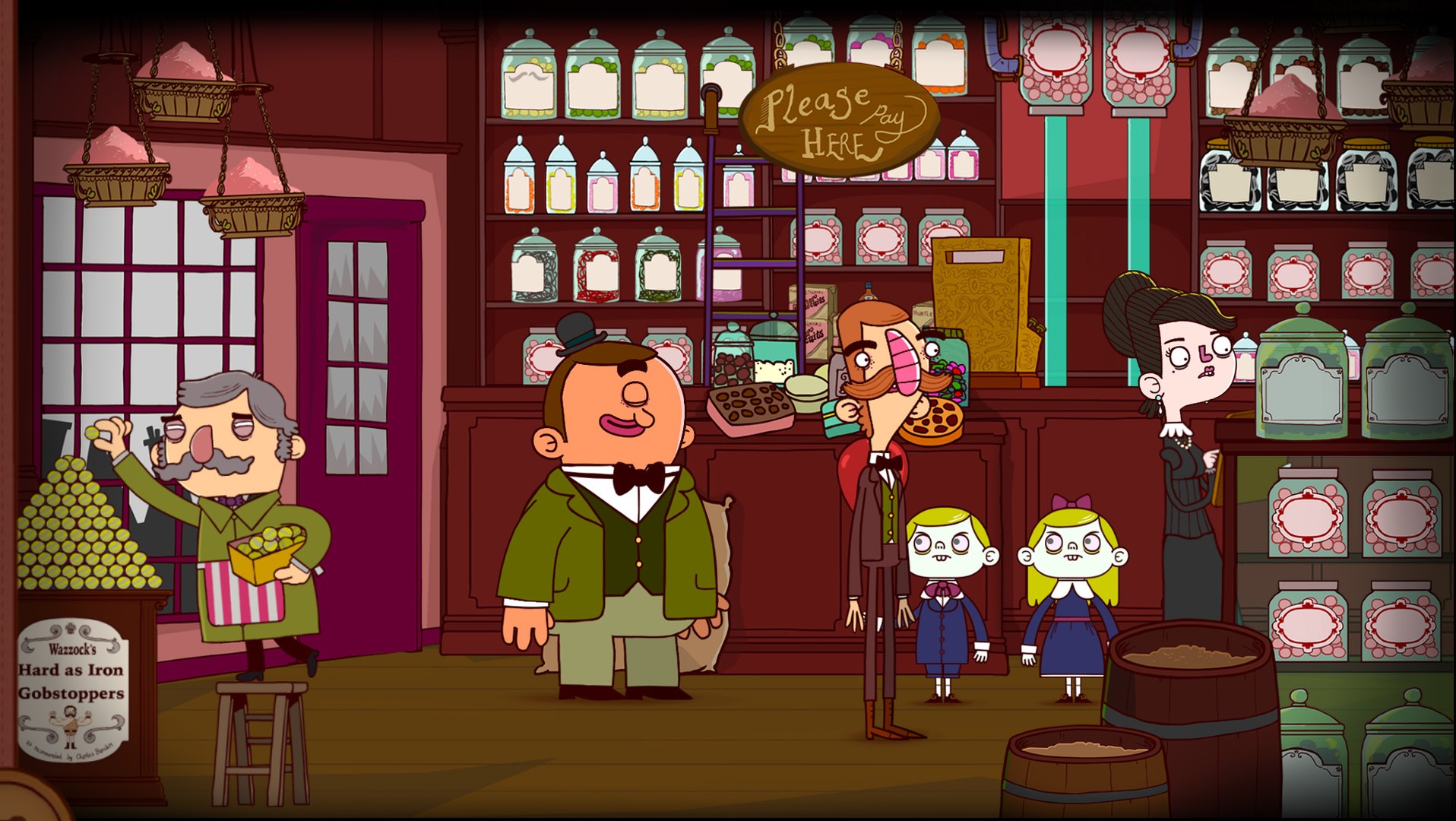 The first episode of The Adventures of Bertram Fiddle, A Dreadly Business, made a good impression on us when we  reviewed it. A quirky point-and-click adventure set in the Victorian era; we found that it set up a world of interesting characters for further episodes to build upon its relatively short length. Well, there’s good news and bad news regarding Fiddle’s second outing—the world and characters are just as eccentric and charming as ever, but the story fails to hit many good beats.

In episode two, A Bleaker Predicklement, we’re still Bertram Fiddle and we’re still in 1844 London. Bertram’s friend and colleague, Gavin the Peruvian cyclops is still his sleuthing sidekick and Geoff the Murderer is still on the loose. Bertram works at a soap factory and this is where we find him at the beginning of A Bleaker Predicklement. Manning the telephone and making sales calls in an attempt to sell soap, we receive a call from Mrs. Dullsworth, the mother of Bertram’s boss. She has a sneaking suspicion that her son, Mr. Dullsworth, is up to no good. And just like that, we are back investigating dastardly intrigue.

The world and characters of The Adventures of Bertram Fiddle are beautifully hand-crafted and the gorgeous artwork and genius world-building is where the series shines brightest. Its style is reminiscent of a Matt Groening animation, and this is what makes A Bleaker Predicklement so uniquely compelling. The game’s presentation is absolutely faultless in this respect and it would make a truly brilliant television animation.

The character design adds to the world’s overall atmosphere. For example, Mr. Lawrence, the butcher, has a creepy meat obsession and a penchant for innuendo. This goes for most of the city’s other denizens, too. Look at the art hanging in people’s homes and you will soon start to realise that Geoff the Murderer could be any one of these fiendish deviants. Something sinister certainly is going on in this version of London.

Although, Gavin is the weakest of these characters, while Fiddle is witty, funny, and interesting, Gavin is less so. His jokes are mostly puns and there’s too much comedic emphasis on him being from Peru. It’s a novelty that quickly wears thin. To be honest, Gavin doesn’t exactly do much in this episode, either. Aside from a short time where we control him at the beginning, he is mostly relegated to the role of hulking voyeur. When Bertram says something is too heavy, you make Gavin do it.

A Bleaker Predicklement’s humour relies heavily on pun and parody. At first, you will giggle as you telephone Keith DeBauchery and Ruth Fondling in an attempt to sell them soap. One of them tells you “Speak up, my eyes are hurting,” while another tells you that she doesn’t want soap, she likes to stay dirty. There are also some more subtle gags and goofs. Like going through your boss’ desk, only to find hand lotion and exclaim “Hand lotion! He must like keeping his skin soft,” or pondering why the soap factory is right next to the jail. Unfortunately, over the six-ish hours it will take you to play through episode two, the puns wear very thin. 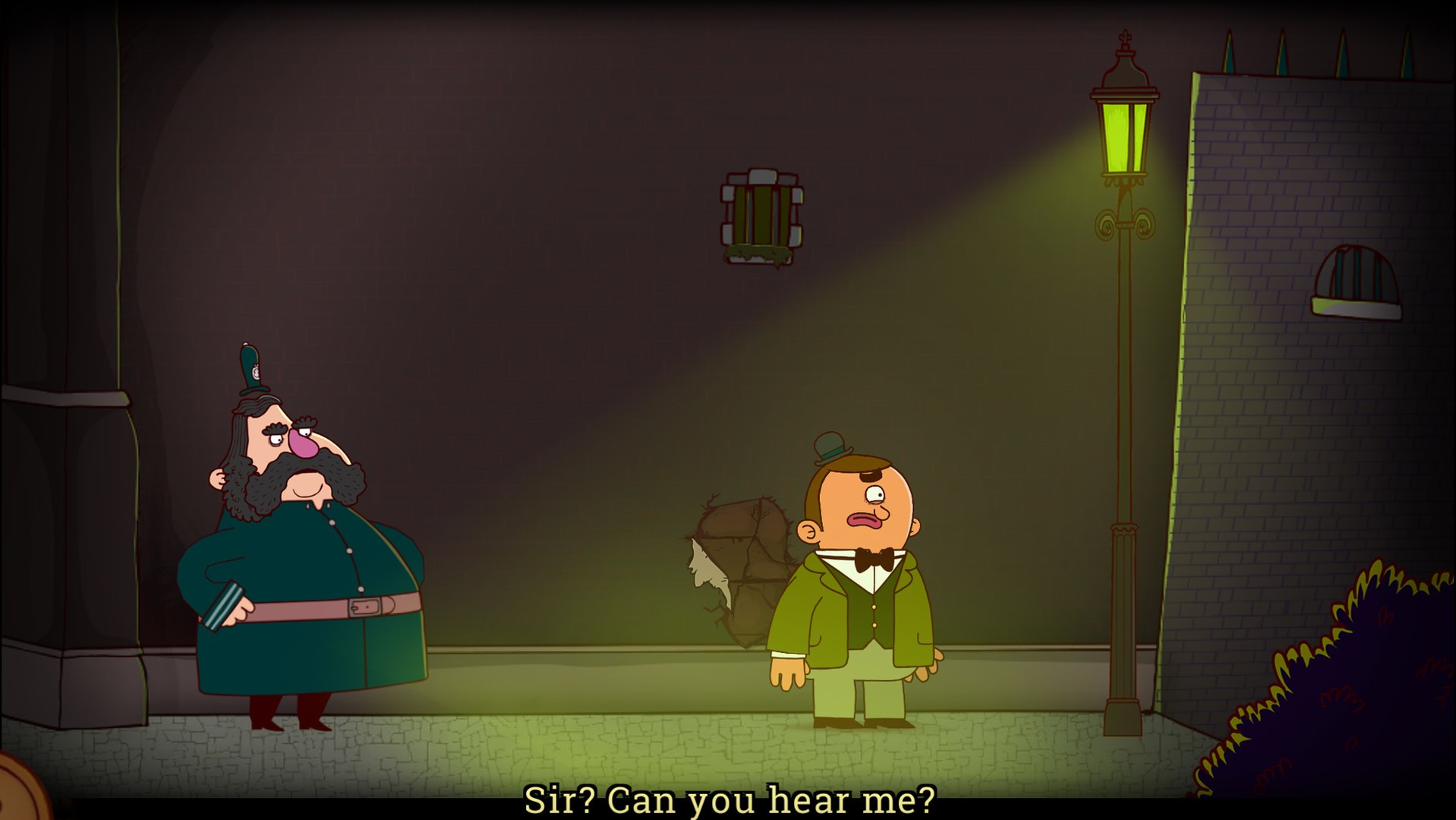 Puzzles are hit and miss. There are some good puzzles, like cutting out words from a newspaper to spell your name for a camera. There is a comedy twist to this, however, that will have you giggling at the sheer silliness of it, but saying more would mean entering spoiler territory. Similarly, some are logical. Such as talking to a workman who tells you that he will leave when a broken clock strikes. This leaves you working out a way to make the sound of a clock striking, which you do by upending a trashcan and giving it a good whack with a staff.

Some of the puzzles, however, are not so logical and these wacky puzzles will feed your frustration. In one such instance, you come across a door requiring a numerical password. In the same room, you can turn on a machine which then sprays steam out of its valves. The number of jets spraying steam is the door’s password. There are no real indicators of what to do and what steam has to do with passwords is anyone’s guess. Inexplicably, the majority of puzzles are actually solved by paying attention to puns that Bertram and Gavin make. In one scene, Bertram needs to pull something out of a swamp and Gavin says that “It wool take a lot of effort to get it out.” The answer to the puzzle, then, is to find wool.

There are other gameplay annoyances, too. See, for an adventure game, there isn’t much adventuring. The problem is, that the level design is too linear with not enough looping. Meaning that you are constantly traipsing over ground you’ve already covered again and again. All the while clicking on an object to re-inspect it causes Bertram to say the same lines over and over again. Which is grating when you are stuck for clues.

Adding to our growing list of negatives, if you try to combine items that aren’t supposed to go together, Bertram says “No, that won’t mix” in a high-pitched whine. This gets very wearing over the course of the episode and isn’t an isolated incident. It would have paid to record a couple of extra voice lines here and there to alleviate this. It’s also a given that Bertram will get caught on objects as you navigate the game’s scenes. A real shame. 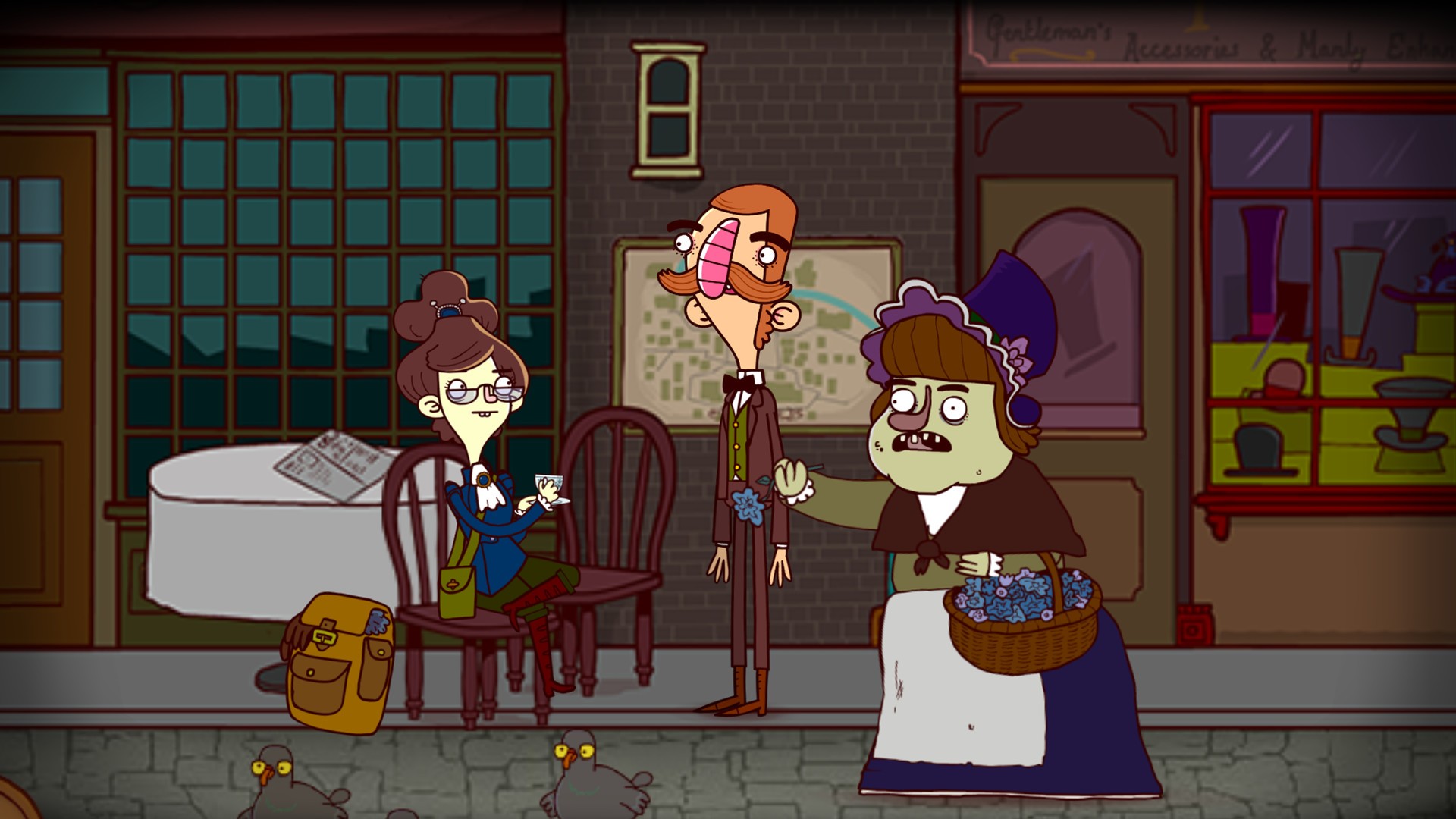 There isn’t much to say about A Bleaker Predicklement’s story because it just doesn’t go anywhere. We’re still chasing Geoff the Murderer, but that particular plotline doesn’t pick back up in earnest until Chapter 6, the last chapter. We also get to visit another location outside of London, but almost as soon as you get out of the city you are made to turn around and go back. There really is a lot of dissonance to the plot: it’s hard to follow a chain of cause and effect, and the game seemingly sends you on jaunts just for the sake of it. Although, A Bleaker Predicklement wraps up the plot of the first two games neatly, if not in a particularly compelling manner, and hints at more to come.

All in all, the wacky premise of the game is juxtaposed with the outmoded and frankly quite basic design choices. Its humour can be really funny in places; at other times it will have you rolling your eyes at the overdone puns. The main problem is that A Bleaker Predicklement focuses too hard on its appearance and not enough on what lies beneath. The plot is disjointed, verging on filler, and puzzle solving is lacklustre. So far the series seems to be a bit unfocused and unsure of itself. With such a fantastically original concept, it’s a monumental shame that it’s held back by unthoughtful and unpolished design. The premise, world, characters, voice acting, and artwork really pull this game up, but without work in other areas it’s hard to see how future episodes will captivate. It’s worth checking out A Bleaker Predicklement for the unique world alone, but adventure game veterans should check their gameplay expectations at the door.

Bertram Fiddle’s second outing falls short in many areas, but its world is still unique and beautifully realised.