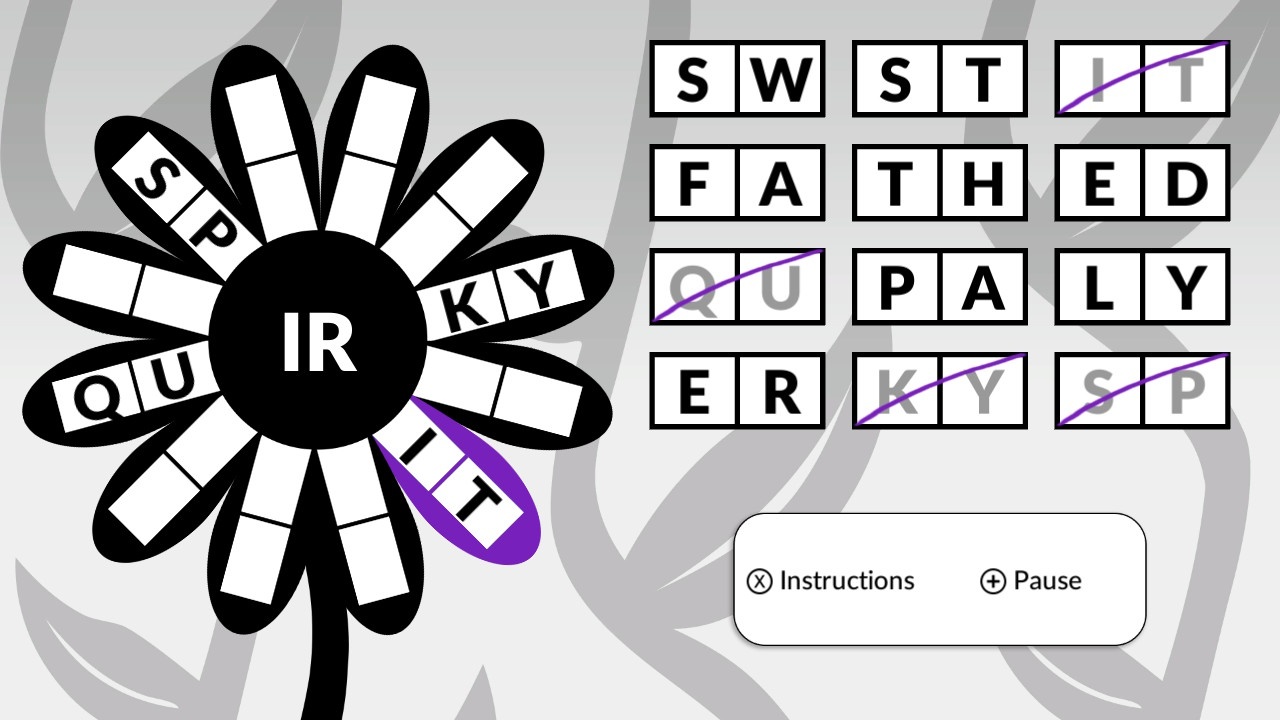 The genre of puzzle games probably contains one of the widest spectrums of sub-genres within its subjective form. There are genre styles, such as point-and-click and hidden adventures and there are more familiar concepts such as fitting the pieces of a jigsaw together. Many developers also incorporate new elements and styles of puzzling that can only be done in a digital form, examples of these can be found in titles such as Warp Shift and Tetra’s Escape. However, when it comes to real classic puzzling, such as word searches or crosswords, then there’s no greater advocate for this style of puzzle than Lightwood Games and in particular, their four-legged friend, POWGI. Something that has never been more prevalent than within their latest game, Word Puzzles by POWGI, as it now spells a release upon the Nintendo Switch.

In a change from their previous title Word Search by POWGI, Lightwood have gone for a more varied approach from a single style of puzzle, this time bringing us six unique styles of word puzzling; all of which equates to a staggering four-hundred plus puzzles for us to delve our old grey matters into. Each of the modes on offer here start with a brief, hands-on, tutorial to offer a familiarisation to their mechanics. There’s nothing too taxing here, at least in terms of understanding how each of the puzzles work. However, when it comes to the content and solutions, then there’s a lovely balance here between lateral thinking and visual perception. From the start, all of the modes available are playable, so without further ado, we’ll take a look at each of the games that are on offer here.

First up is Word Maze. At first glance, it contains an aesthetic that looks very similar to the layout of a word search. However, instead of seeking out a variety of words hidden within, you are instead tasked with creating a continuous link from word to word to produce a maze. Each of the puzzles have a central theme running through them, such as fruits and vegetables. Find the word tomato and where the O ends the word, it also signals the start of orange and so on and so forth. Each of the interlinking words unravel around the grid in a snake-like fashion, until the grid is completely full and the words maze around its entirety. It’s a very simple premise, yet one that works extremely well in what it sets out to achieve. 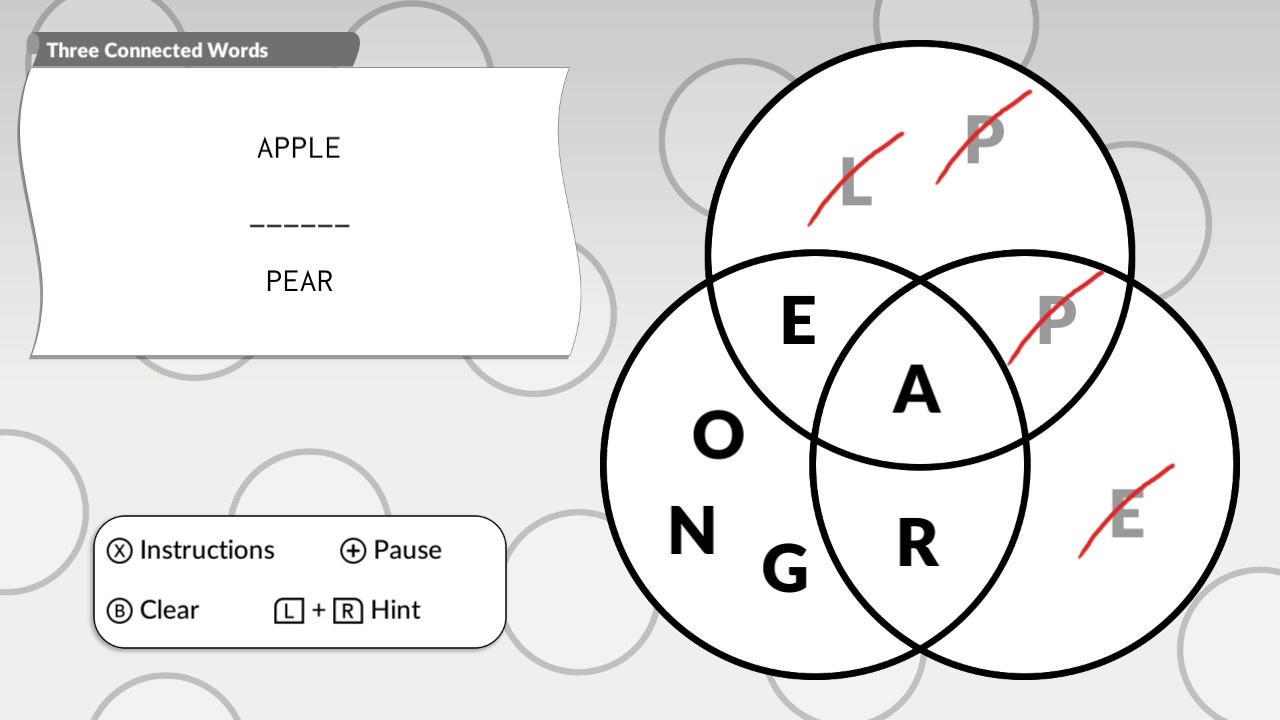 Next up is One Word, another word search style game, only this time the grid of letters contains only one word. From a famous quote within history, one word is missing from the text and it’s up to you to figure out the missing word and find it within a wordsearch-styled grid. For instance, say you have the word ‘regret’ to find, the whole grid in which it can be found is comprised solely of letters that make up that word; making your task of finding that sole word all the more difficult. Each of the quotes may also contain more than one word to find in order to complete their solutions. It’s fiendishly difficult and cleverly implemented to provide a very solid puzzling experience indeed.

Following this is Circles. This game contains three circles that contains a number of letters. Each of the circles overlap at a certain point and within this area, you must find the one letter that corresponds to each of the words found within each circle. Although each of the words follows a central theme, such as colours or numbers, each of the letters within the circles are scrambled, adding to the element of the puzzling mechanic within its style. Next is Mixups, which is a scrabble-style of game. Here, you are presented with a series of randomised letters on tiles. Given a basic theme to follow, you must select from the letters available to produce a series of words that matches the theme. To make things more difficult, each of the letters can only be used once; forcing you to think carefully about what selections you make. 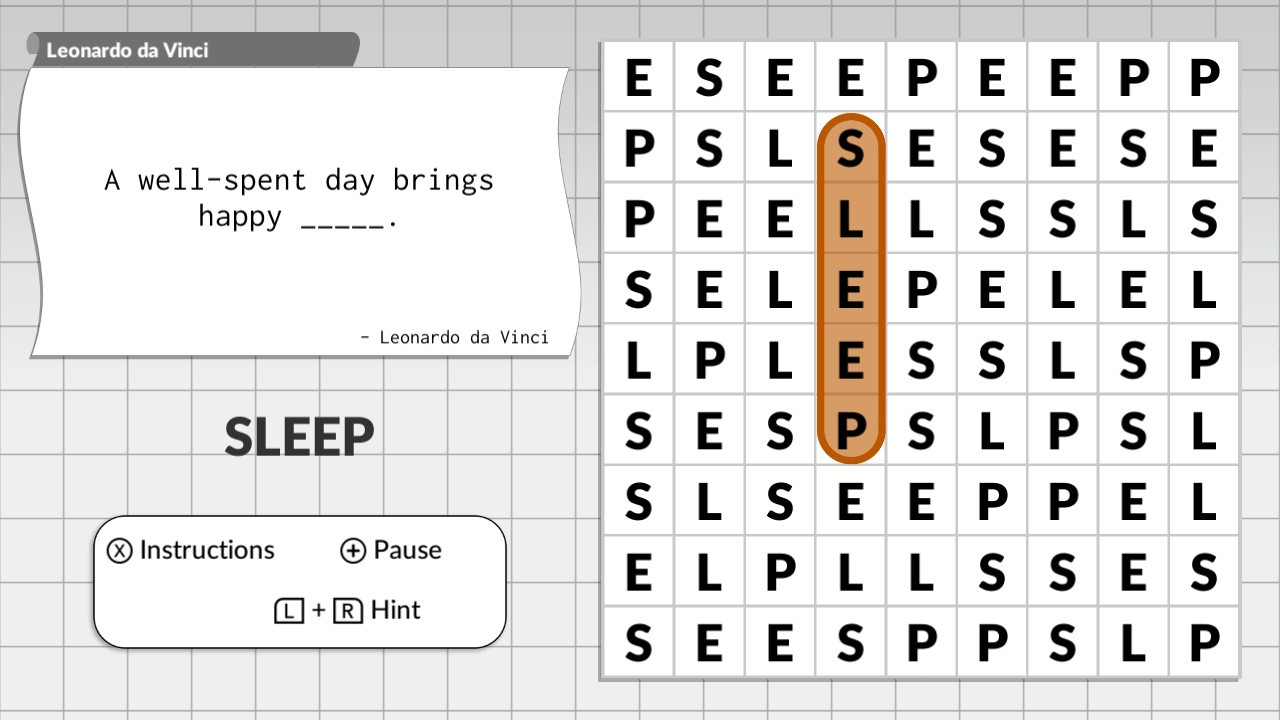 The next in line comes in the form of Flowers, a personal favourite of mine. Presented with the shape of a flower, its centre contains two letters. From a series of paired tiles to the right of the screen, you must fill the petals with two letters each and create a start, middle and end in a flow from petal to middle to the opposite petal to produce a word. Again, it’s a basic premise, yet one that is very satisfying in its mechanics and solutions. The final game on offer comes in the form of Crossovers, a crossword style of game that involves finding a series of letters, the rearranging them into a word. Presented with two words that crossover on a vertical and horizontal axis, you must determine from a selection of letters, the missing value between the two words. As you begin to piece together the series of missing letters, you must then rearrange them to form a word on their own, thus finding the solution to the puzzle. Again, this was another of my personal favourites amongst the variations of word puzzles available within this game.

The presentation of the game as a whole follows a very simplistic aesthetic and basicness in its execution. There aren’t any bells or whistles, but this is a game that doesn’t really need them. In fact, it almost follows the black-and-white tones of a puzzle magazine; an aesthetic that suits its style perfectly. As well each screen containing the elements of each puzzle, a small menu also highlights a series of options from further instructions should you need reminding, an option to clear the page should you get stuck or make a mistake, a pause options that also quits the current game and a series of hints, performed with the L and R shoulder buttons, should you find yourself stumped in what to do next. To add further accessibility, full use of the Switch’s touch-screen capability has also been implemented here to excellent effect, almost mimicking the actions of putting pen to paper; a motion that has long been associated with word puzzling.

Overall, Word Puzzles by POWGI presents a nice selection of, well, word puzzles. It’s a tried-and-tested genre of puzzling that has always remained endearing and fascinating both kids and adults alike, yet is now presented in some very unique forms that provides a good source of light entertainment. It’s popularity can’t be denied, with many magazine publications still selling well to this day. As far as Lightwood Games’ representation of its genre in a videgame format goes, there’s no better example as to what they have devised here. With some fun and pleasing puzzles, plus a wealth of content, there is plenty here to entertain anyone of any age for a good length of time and for that, POWGI deserves a well-earned pat on the head; and maybe even a bone or two.

There’s nothing puzzling about this fun and varied selection of Word games. Oh, hang on! Yes, there is!