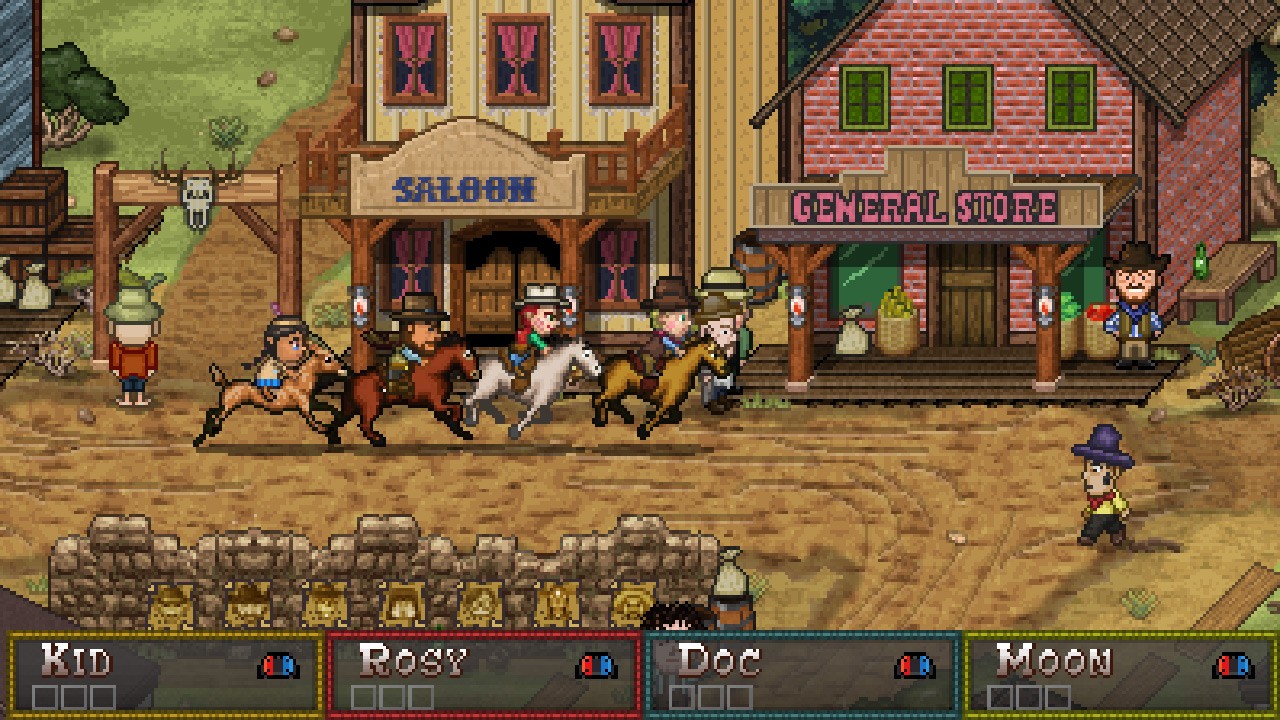 I’m all for a good old adventure game, whether it be action orientated or a good, old-fashioned role-player. One of the biggest appeals of the genre, for me anyway, is that it can cover a range of settings or stories, from hunting down dragons, seeking out treasure, exploring space or generally, saving the day. Admittedly, these types of games can fall into a series of tropes that involve might and magic, more often than not, which is all good and fair, but admittedly, it’s always nice to play something that revolves around a different setting and Experimental Gamer Studios have done just that, as we saddle up to take a ride into the Wild West, as Boot Hill Bounties moseys on down to a release on the Nintendo Switch.

The game follows the story of Kid and his posse, made up of Doc, Moon and Rosy. The group are repatriated with the resurgence of the Saints-Little Gang, a group of outlaws who have remained undercover for a decade, but have now resurfaced to cause tensions between the natives and the colonists of the land; thus bringing a real possibility of the outbreak of civil war. Set within a semi-opened world, you choose to take on a series of tasks, such as acting as peace makers between the rowing colonists and natives, hunting down the members of the Saints-Little gang and interacting with a number of characters to try and avoid the impending war.

Once Kid and his posse are repatriated, you are given complete freedom to approach the tasks ahead of you in any given order. It allows a sense of freedom as you travel the Wild West through towns and settlements in order to relieve tensions and free-up the pressure points of specific conflicts. The game sets up the story with a text heavy narrative, you’ll be reading a lot, but it sets up the scene in an effective manner which introduces characters, their own personal stories and backgrounds, as well as highlighting the growing disparity of the current situation. Despite its heavy texts, the game doesn’t run in a linear fashion, which is quite an achievement, as the story never feels disjointed at any point along its extensive arc. 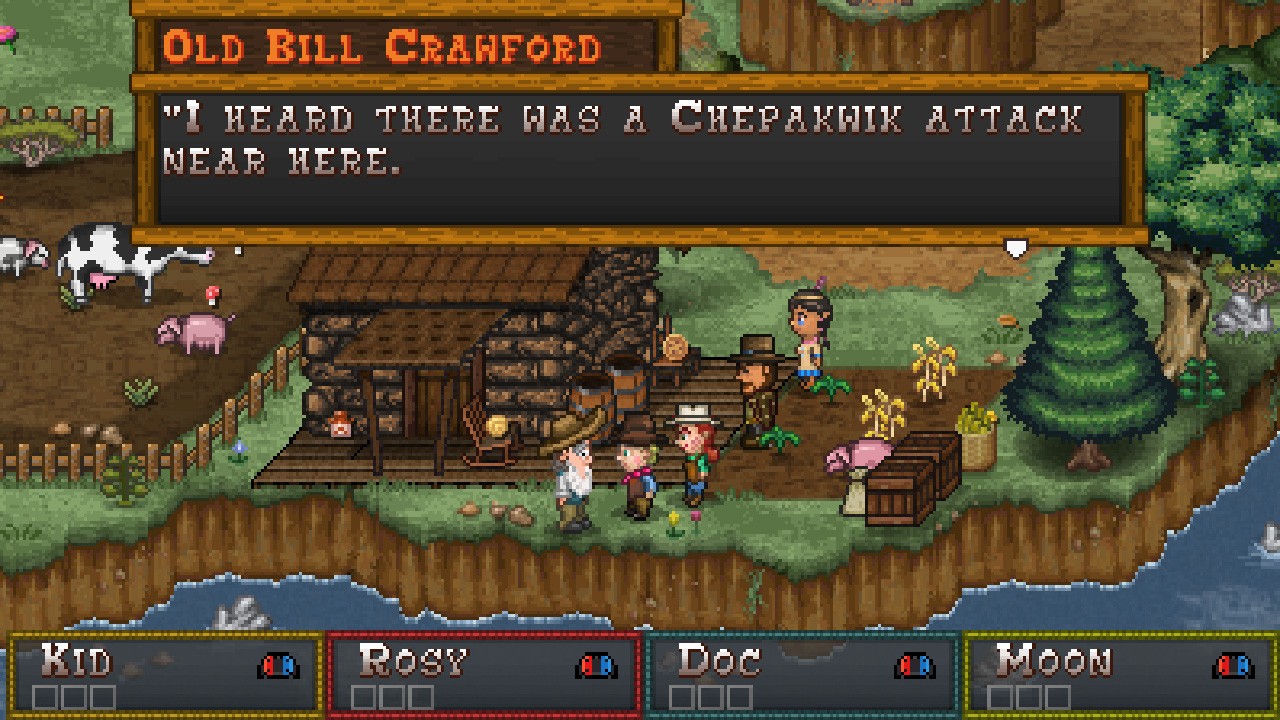 As with any good role-playing game, there’s a great deal of exploration here, allowing you to collect useful items for your journey ahead and in many ways, its mechanics will be familiar to veterans of role-players. You travel the land, explore locations, build up stockpiles and converse with a whole cast of NPCs. However, where the game differs slightly, is in its combat mechanics, producing  a turn-based mechanic that feels more real-time. It brings an air of urgency and excitement as juxtaposed to the text-heavy and slow-going nature of the story-laden adventure. It’s a pretty unforgiving mechanic too, with hard-hitting enemies, a choice of combat options and the need to watch over four gang members, instead of the usual focus on just one.

The combat segments of the game work in a way where, both your enemies and yourself are presented with a series of combat moves. These can range from general melee or gunfight moves, to dodge abilities or calling upon the help of other allies; such as your faithful dog. Each of the moves available to you require differing amounts of energy in order to activate them. A power bar constantly fills when engaged in combat and when the bar fills the required energy to activate your ability, your move is then taken. The same applies to your enemies too, with a handy little marker on the energy bar to highlight the level of combat move your foe is about to make.

From this reading, you can make a judgement on how powerful the next combat move from your opponent is going to be; allowing you to act accordingly in preparation for the oncoming attack. It sounds simple, but in real terms, it’s a busy mechanic that requires fast fingers and quick thinking, just like the real gunfights of the Wild West. This fast-flowing style of combat, which is essentially turn-based, is made all the more hectic with the need to monitor up to four characters at a time, picking each of their moves to correspond with enemy activities. However, to make things a little easier, you can pause the action at any point to plan out a strategy or attack. It’s a mechanic that you’ll deploy a lot and, sure, it produces a stop-start style of play, but it’s one you’ll be all the more thankful for as you progress through the campaign. 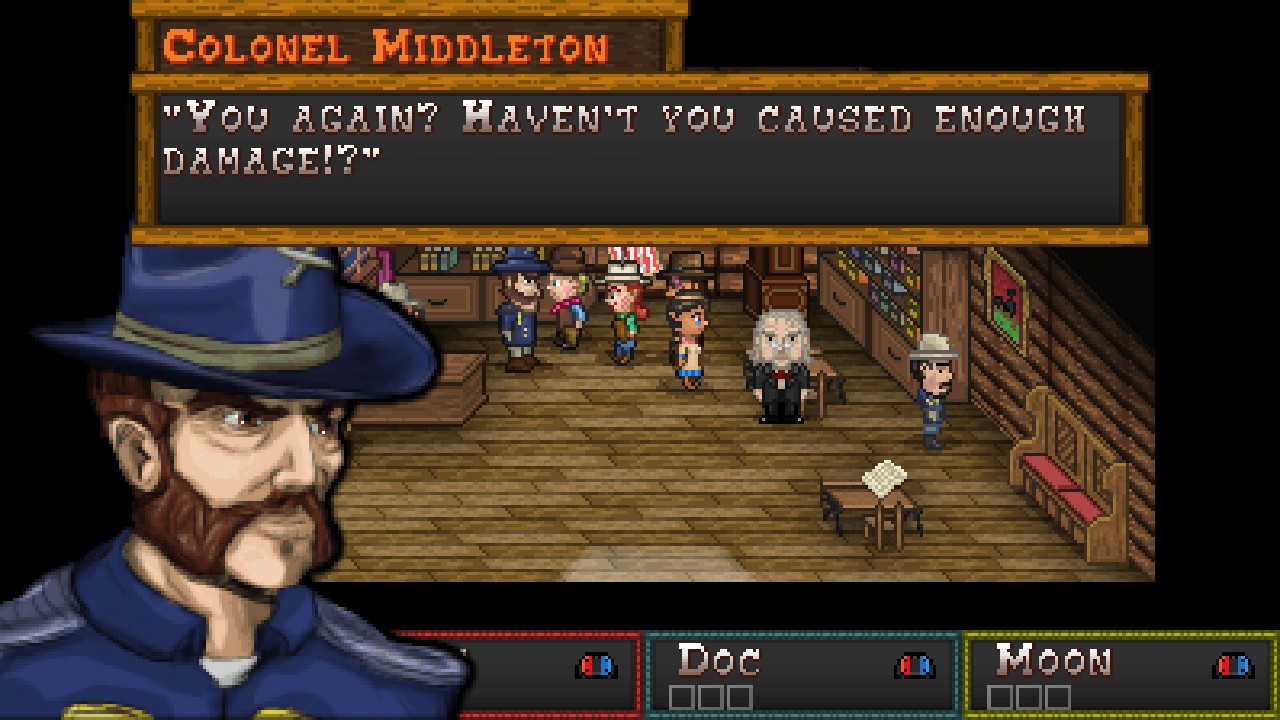 By no means underestimate the challenge here, as the combat is gruelling, but never unfair. To help, your party members all heal between bouts, unless affected by a status effect, which needs treating by a doctor. Equipping certain armours and weapons also help, as well as hats that can change your skill-sets and offer variations to your attack abilities. However, by far the easiest way to play the game and also the most enjoyable, is to take advantage of the game’s ability to be able to play locally with up to four players; essentially each player taking control of each member of Kid’s posse.

This mechanic significantly reduces some of the difficulty and tensions found when playing solo. It’s also great fun as you and your friends or family live the fantasy and adventure together. For soloists though, you can also play the game on an easy setting which helps if you find everything a bit too hectic. Despite its challenging combat, its the story and characters that really shine here, as well as some fantastic audio and beautiful pixel-art sceneries to look at. Everything you do is crammed full of atmosphere that gives a real Wild-West feel to the settings and produces a fun game that’s well worth exploring.

Overall, Boot Hill Bounties is one of those little golden gems that are simply dynamite. It you love the Wild West setting, then you’ll simply adore exploring this game, with its stunning sceneries, moments of spaghetti westerns, unique combat and extensive storylines. Everything runs super smoothly too, with silky movements and tight controls that feel super responsive; something of a god-send when it comes to the finger-flicking and quick thinking combat. Whilst veterans of RPG’s will revel in its offerings, newcomers or lesser experienced players may struggle to come to terms with many of its intricacies, but a lot of its charm lies in figuring out everything that the game has to offer and makes for a more rewarding experience. If you’re on the look out for a good, old-fashioned RPG with a decent challenge, the Boot Hill Bounties is certainly a wild western.

It’s time to mosey on down in the Wild West Role-Player that is Boot Hill Bounties.