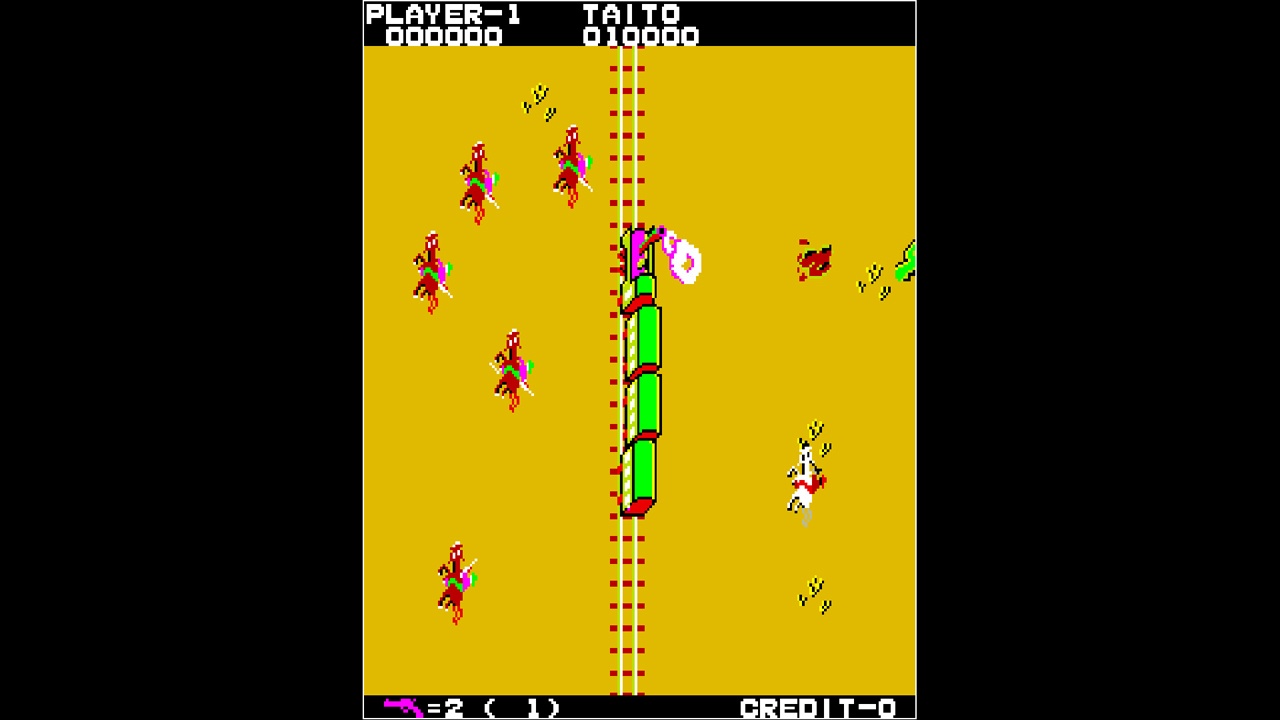 More often than not, I come across, in my reviews, as a massive retro apologist. For a majority of the Arcade Archives that I review (not to mention the rose-tinted lenses through which I view the past), I do a lot of tripping over myself to say that a game has merit due to importance in history, or the limitations of the hardware, or other things like that. I get it, it becomes annoying, and it doesn’t always make for the most genuine review of something in the scope of how it can be purchased by an audience today. Well, thankfully, there are some games that haven’t aged well, but, in fact, were never good to begin with, regardless of generation or time. No matter how ironically people look at E.T. on the Atari 2600, it was a steaming pile, and could be argued as the lynchpin that caused the game crash of 1983. But, with Taiko’s release (and Hamster’s port) of Wild Western, it becomes apparent that there was more than one horse dragging video games through the mud.

Wild Western is an arcade game in which you are some kind of sheriff on horseback, protecting a train from being overtaken by bandits on its way to the station. You go through about four stages worth of bandits coming in on horseback, attempting to hijack the train and it’s up to you to shoot them and keep them from overtaking the cargo. Once the train arrives safely, you get to do it all over again, because that was the style at the time. This is an element that we’ve already seen in Alpine Ski, Pooyan, and countless other arcade games, so that’s certainly not the issue.  After all, did you think that bandits would simply give up once they saw a single train was able to reach a destination unrobbed? That wouldn’t begin to make sense. 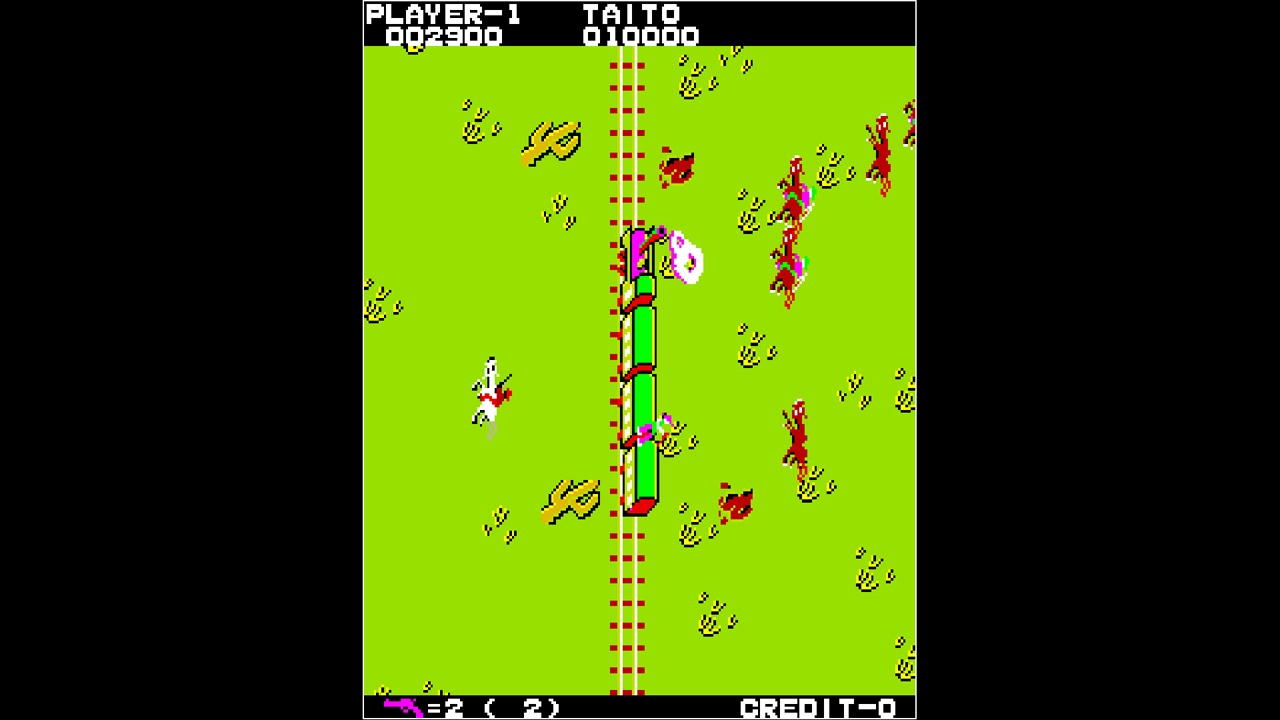 A grim sense of foreboding sets in as soon as you load up Wild Western and you see the first part of the game’s Switch title (Arcade Archive) and then see what the screen looks like. A saving grace for a lot of the arcade releases is that it gives a different perspective or set of graphics to see and enjoy. From the dramatically stronger Image Fight to the slightly improved Donkey Kong 3, the use of the better chipset and more powerful hardware gave arcade games a fighting chance. However, Wild Western looks like it would have appeared, as is, on an Atari 7800, and that can be incredibly disappointing. The only difference between the sheriff and the bandits is a color swap, the train is pretty blocky and standard, and the landscape consists of brown and green variants to give the illusion of the Wild West’s natural settings. Visually, it’s incredibly off-putting, and the sound quality matches. The audio is a very abrasive, high pitched soundtrack that consists of a couple of public domain songs (Turkey in the Straw, the Ants Go Marching) that loop endlessly during the level and are almost consistently drowned out by the sound effects. Holy gods, the chug of the train, the whine of the bullets, and the random blips that just occur throughout the game are exceptionally hard on the ears, but you just sort of grin and bear it because that’s what you do. Still, unless you are dead set on keeping with the old school soundtrack, muting and a separate playlist might be required.

As for the gameplay itself, it feels like this could have been more interesting had the hardware been slightly better at the time. You see, Wild Western fancies itself a twin stick shooter with only one stick. You need to ride around on your horse, dodging bullets and sending shots back yourself, and you essentially have 360 degrees of movement on your horse. To the horse’s credit, he seems to move in a totally unnatural way, allowing for maximum dodge and weird strafing that I doubt most modern horses can do. However, the angle at which you’re aiming also changes as your horse does, and you are never totally certain where the next bullets are going to go off. There’s a button to show you the direction where you’re currently aiming, but that requires hitting it and seeing where your facing while actively avoiding being shot by five other NPCS, who have none of the hangups that you do of orienteering. Your best bet, time after time, is to rush the gang as soon as they cluster and wiggle your joystick wildly while firing and creating mayhem, potentially taking out a few of the bandits at a time. 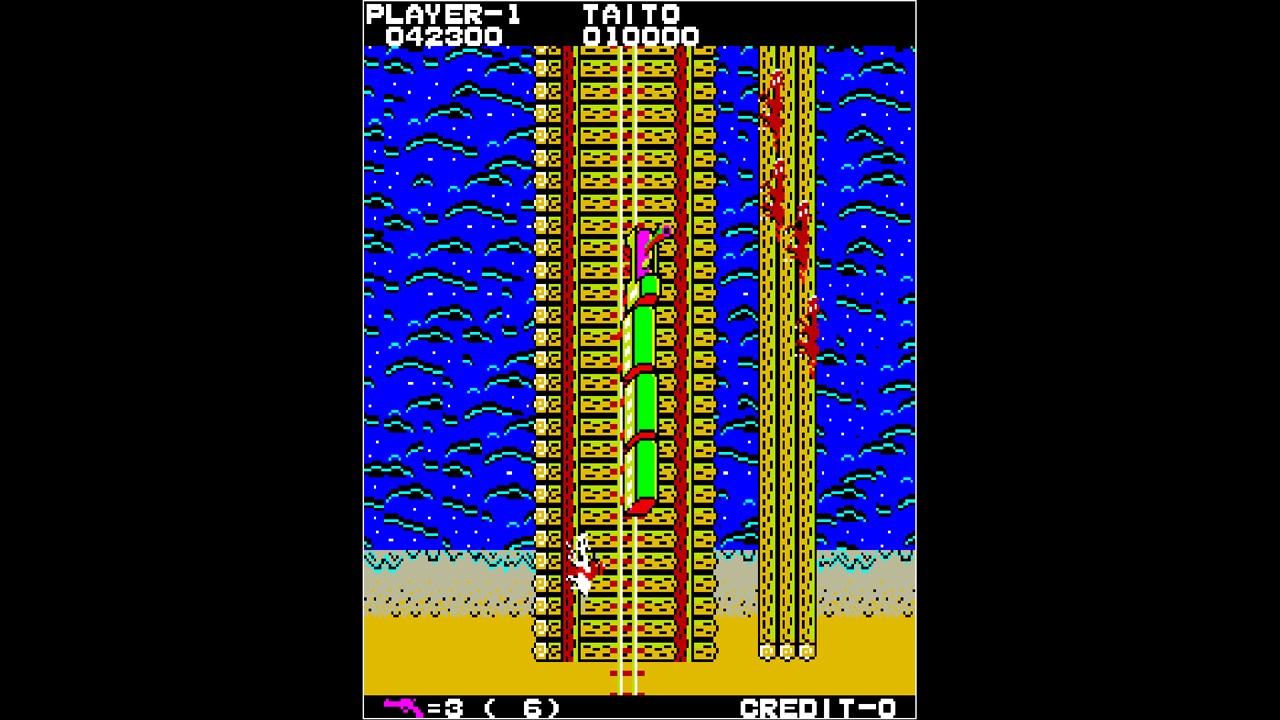 Even then, Wild Western doesn’t hold a lot of enjoyment or replay value therein. Once you figure out what you’re supposed to be doing, certain levels of annoyances set in. You have unlimited bullets, but the firing rate is a tad slow and janky. The bullets themselves are about one pixel high by four long, and can be  difficult to see against the grainy backdrop. Players might realize they NEED to keep the music on, because Turkey in the Straw is how you know you’re about to reach the station and need to dispatch the bandits ASAP, but damn does it get annoying and loud. Plus, so many things on the landscape – cacti, ditches – don’t have clipping, but you have to worry about the occasional wall, the occasional river, and the stupid train itself. The train is the biggest villain in the game: you watch bullets bouncing off it without slowing it down or causing any damage, and there’s no problem if a bandit runs straight into it. So the train, it seems, is perfectly capable of taking care of itself, but it just wants to watch you murder five people on the way home. Is this some kind of weird, homicidal dinner theater? Eat some grits in the dinner car and watch the sheriff shoot five people trying to make a living? It’s bizarre, and I get making the train act as a bullet buffer, but I sure do wish it wasn’t so imposing.

If this is a part of your childhood and you really enjoyed this game, I apologize. Your parents should have saved their quarters and gotten you a 2600 (which would have been pretty cheap at the time) and you could have played games just like this and more from a garage sale. It’s got a certain charm to it if you’re super into Westerns, but, for the most part, it’s a slog that goes nowhere and brings no joy. Only get this if you’re a collector or an Old West enthusiast who needs everything cowboy related.

Time has not been kind to Wild Western, which would have been a bit passe at the time and now just feels completely obsolete.