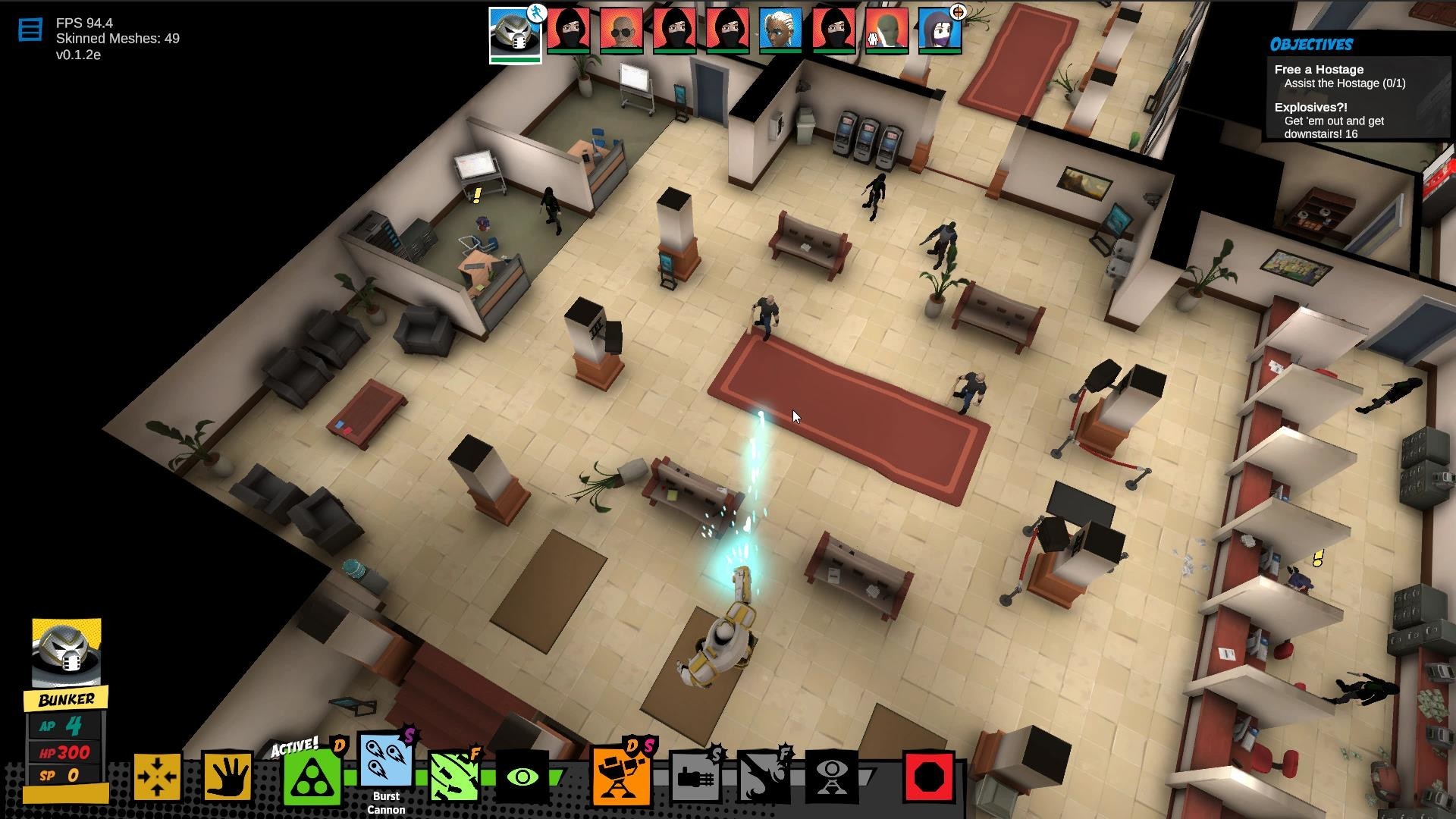 I think there is an unwritten rule as a child growing up, and that is you either love, or hate comic books. There is no in-between space, and I’m always very dubious when I hear someone say, “They’re alright!” Those that hate the genre cannot understand why people like them, and those that love the genre cannot comprehend how you could possibly dislike it. As you grow up this love turns into a borderline obsession, and you take any opportunity available to you to fill that superhero/villain sized gap. The market for all things heroic and villainous is vast; films, books, art, comics, board and computer games. There are probably more, but this pretty much covers the list. I personally fall into the love category, and I genuinely get excited when I see anything that allows you to assume the role of a superhero where you must save the city by overcoming an evil villain, and their army of goons.

Sentinels of Freedom has been published and developed by Underbite Games this turn-based strategy title has you dipping your toes into the world of crime fighting, as you control your own superhero, and a band of others who save the city and take down one baddie at a time. Anybody who loves the turn-based genre will instantly jump to comparisons with the market leading game Xcom. This is usually fair as both Microprose and Firaxis Games have set the bar pretty high. What must be considered when looking at this title, however, is the size of the team that has worked on it. Only 4 persons make up this creative group, and with a much smaller budget to work with it wouldn’t be fair to expect the production value from its market leading peers.

If you are a gamer who loves strategy card games, and deck builders, then you will be aware of the games that Sentinels of Freedom is based on; Sentinels of the Multiverse and Sentinels Comics: The Roleplay Game. Fans of the franchise will surely be excited to have another title added to the mix, especially one that allows them a more hands on approach. I’ve never played either of these titles, so I picked this up with no understanding of the character background, or the lore surrounding the story. You need not worry if you are in the same position as myself, as everything is explained along the way, and a robust tutorial gets you up to speed pretty quickly.

So what is the premise of this game? You control your band of superheroes, each with their own special ability and strengths. You then throw into the mix your own created character, who can be a combination of many elements, and allows your geek creative juices to flow freely. Once you’ve completed the opening tutorial, you are introduced to the main hub, your heroic headquarters if you will. From here you customise your character, and select those all important missions that help to keep the villains at bay, and the world a safer place. As with most turn-based games, players can expect to experience a somewhat repetitive nature to the missions available. Effectively they revolve around rescuing people or destroying baddies. This is me dumbing down the complexity of the tasks, but essentially this is the main aim for a lot of the missions available. 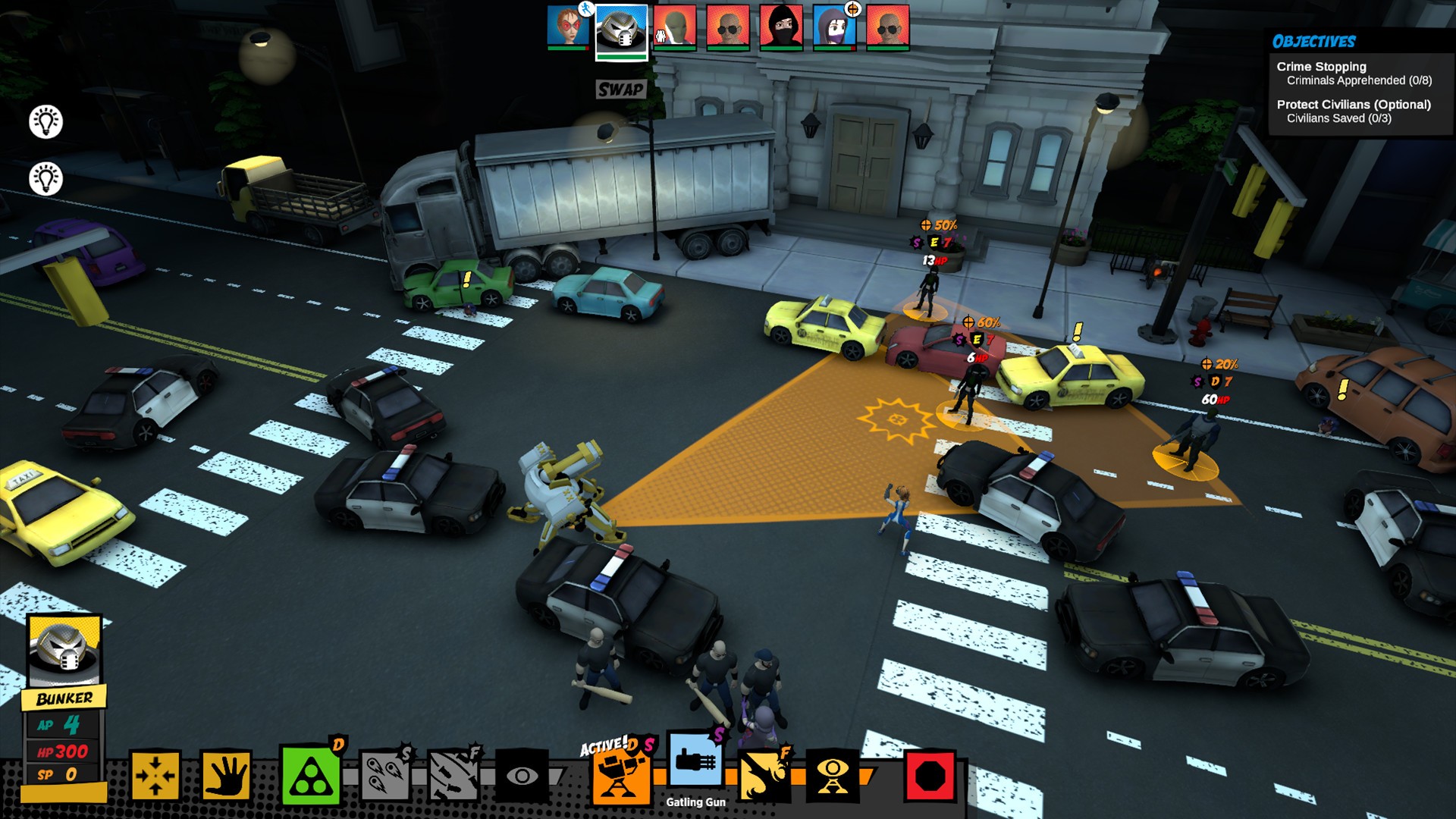 The biggest surprise to me was the customisation freedom allowed for your own character. It was in depth, and totally unexpected. I didn’t take it too seriously and got to work creating a super hot chick that had badass powers. She looked great and would pummel anything in her path. She was also called Geoff, “Why Geoff?” you may ask! Why not. Geoff fit into the team instantly and lived up to her promise. Other gamers have reported making some brilliant and unique characters. If you decide to take a chance on this, then you can create the superhero of your dreams as well.

Being a turn-based strategy game, it was no surprise to me that most of the gameplay focused on battles, and all the mechanics that made that tick. Action Points (AP) are the bread and butter and there are different styles of attacks available that have increased or decreased effects depending on the defensive quality of your intended target. So let’s talk AP, this is the heartbeat of each of your players. Everything that you do uses a portion of your available points, and depending on which character you choose, you will move more freely, or attack in greater quantities. You have a choice of ranged or close quarter combat, each has their benefits depending on which enemy you face. You are shown a table that highlights the attacking prowess and defensive quality of each ability, so it’s advised that you study this to ensure that you don’t waste your turn, and you inflict the highest possible damage available. At the end of your turn you may set an over watch ability and the direction of your hero. This enables you to catch baddies unawares, and can score you some vital damage that can turn the battle in your favour. I’ll admit that even though I call myself a veteran of the genre, I struggled to get to grips with choosing the correct attack, and how to navigate the landscape. With a little practise, and much patience I could understand the key fundamentals, but I’d say there are still are few elements that are a mystery to me. My advice is to take your time with the tutorial and don’t give up too soon as it slowly clicks.

One area which stands out and screams indie title is the aesthetics. Now I rarely judge a game purely on how it sounds and looks, but in 2020 I expect a game to have moved on more than this has. So let’s break it down into the two categories; graphics and audio.

Playing out from a bird’s-eye view, you get a colourful and striking palette that makes all the characters interesting to look at, and easy to identify. The landscapes are reasonably well detailed, and it is easy to see the areas to use for a strategic advantage. The ability to pan and zoom the camera makes it much easier to work out a plan of attack, and a handy setting allows you to see the line of sight of the enemy. The downside is the simplicity of the imagery, and the deja vu feeling associated with it. I’ve played lots of different strategy games, and this felt like a generic copy of everyone that I have experienced. It’s not a bad thing as such, as the world is perfectly serviceable, it just doesn’t stand out amongst its competitors. 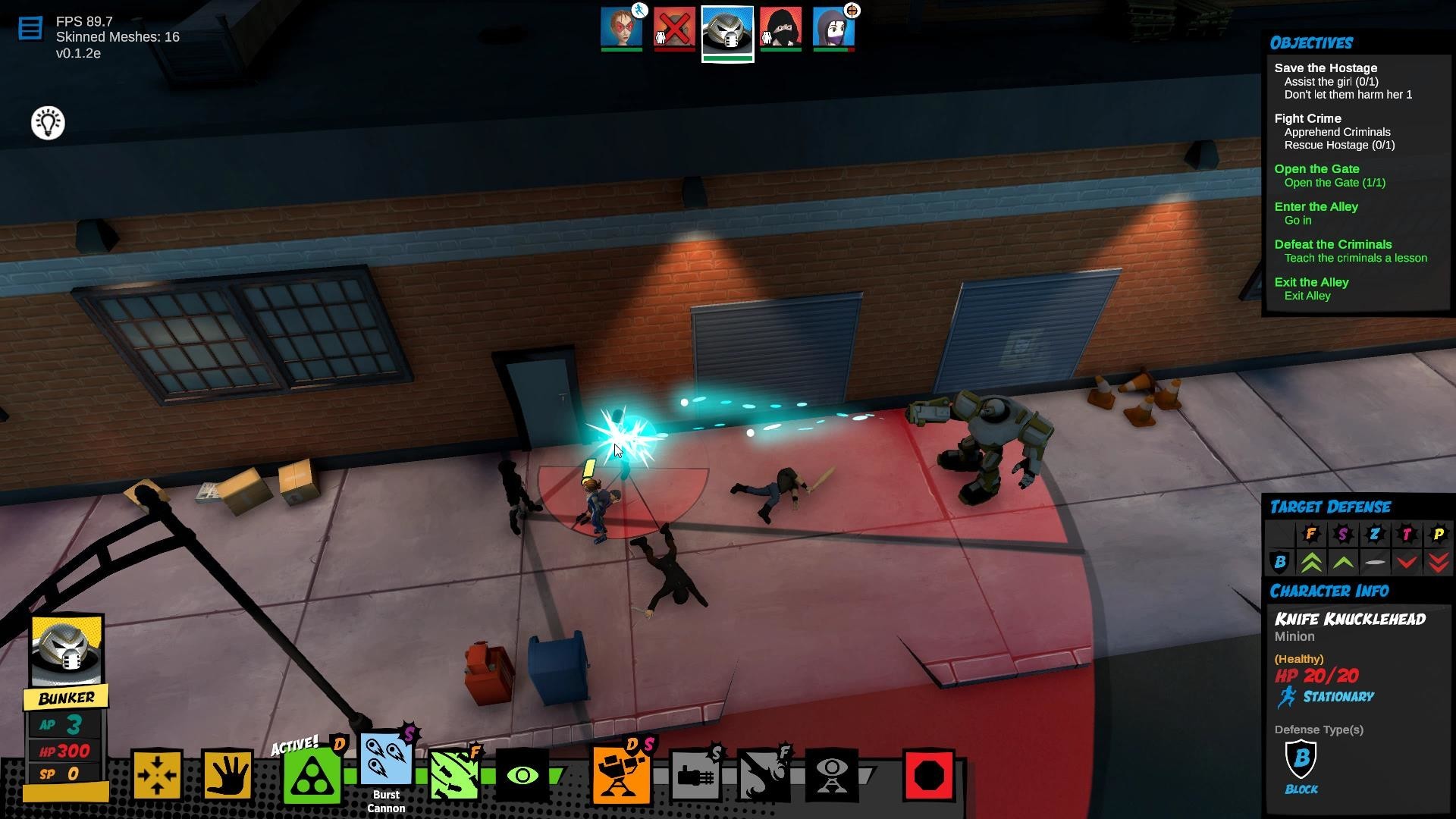 The same can be said for the audio. Though the music is catchy, and you will at times find yourself nodding away to the beat, it doesn’t reinvent the wheel. The sound effects are as expected, and it will neither disappoint or excite you. For me, it existed to fill a void, and though it did it well, I was left wanting perhaps a little more.

I’ve said it before in other reviews, but we all know strategy games work well on the PC, and are much easier to control using Mouse and Keyboard. This isn’t to say that a controller isn’t accessible, and the developers have done a good job at making the control system as easy to learn as expected. I admitted that I struggled with the attacking ideas of this game, but it was made a lot easier by the simplistic nature of the button mapping. The developers also placed reminders on the screen to help jolt your memory if you happen to forget what you are doing.

With several customisation options available to your hero, and several mission types, albeit very similar in style, you’d be right in assuming that there is some replay value to be had. My concerns fall around the similarity of each mission, and if this would impact on your wanting to keep playing for an extended period. I think in short bursts, this is a title that can scratch an itch, and keep you interested in what is going on. But, if you were to try to play this for hours on end, like some of its AAA peers, then you’ll find that everything could blur into one fuzzy memory. I’d say that this is one to be played casually, and to return to in short stints, though a hearty achievement list adds some challenge and desire to return and test yourself further.

Sentinels of Freedom does well to create a casual indie turn-based strategy game that stays true to its superhero roots. Though it does nothing spectacular to make it stand out from the crowd, it is fun and pleasant enough for me to recommend as a title to pick up. This will surely attract interest from veteran and new gamers in the genre, and lovers of comic books, and the existing card-based franchise. It won’t blow you away, but it will keep you interested casually. Get your team of heroes together and take down the baddies one fight at a time.

A fun and casual turn-based strategy game that will be an attractive prospect to a number of gamer types.