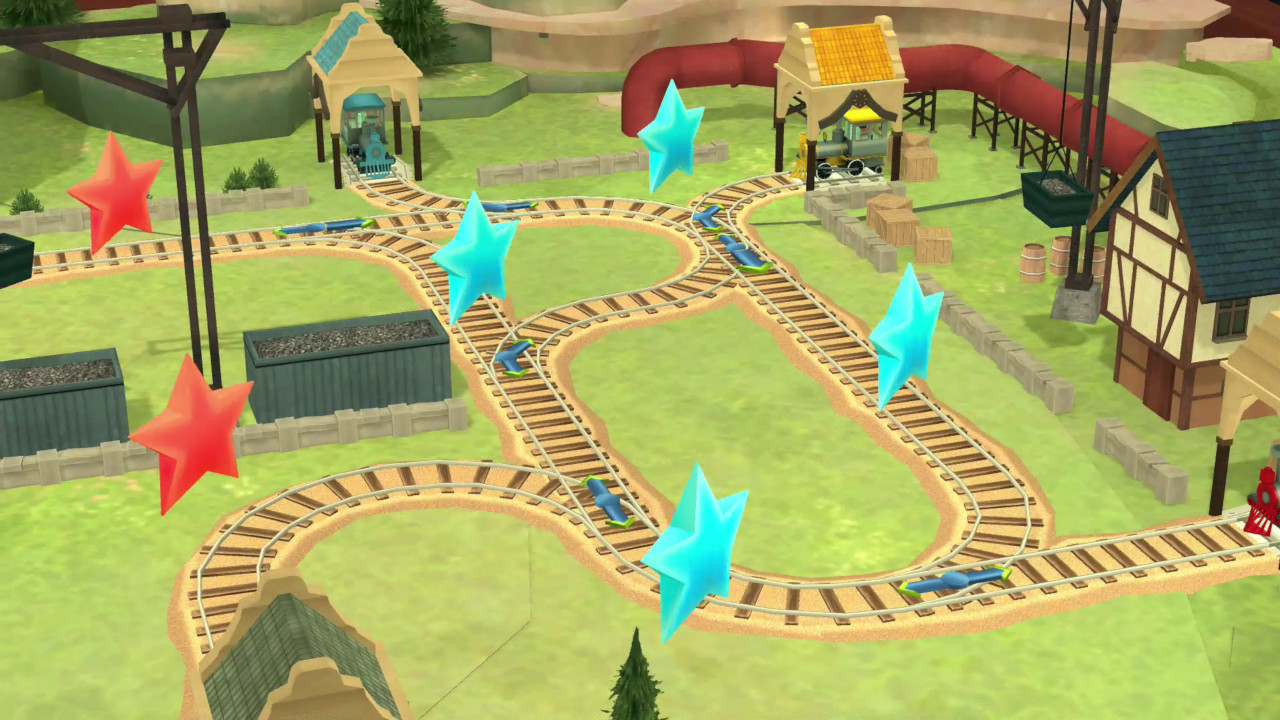 Hobbies can an interesting and educational pastime. Whether it be collecting things such as stamps or movie memorabilia to spotting aircraft, birds and trains, to even just simply playing video games. They can also be a form of entertainment that can be as cheap or expensive as you like. For instance, with model-making you can start off building plastic kits and eventually work your way up to forming a living, breathing landscape with green pastures, rolling hills and a series of model trains that rumble around the attics of your dreams. I myself, admit to having a fascination with such a premise, but lack the funds and attic space to take on such a task. However, my dreams can now be fully-realised as Mini Trains leaves platform one to embark on a release onto the Nintendo Switch.

Developed by The House of Fables and published through QubicGames, this locomotive puzzle game is a port of Steam’s Trains VR which released during the summer of 2018. Now under its new guise, Mini Trains has been stripped of its virtual environment and transformed onto a more controller-friendly experience, with isometric viewpoints and button mappings to ensure a smooth transition; but also retains a few functions to provide a compelling experience for any would-be model train enthusiasts, with an attic filled with a huge-scaled landscape, a variety of steam-driven trains, various camera angles and a host of shelf-stacked achievements to rumble down the rails for.

The whole premise of the game is based around a large-scale modelling of various sceneries within the comfort of an attic; it’s hills, towns and fields housing a scattering of stations which act as levels, with over forty destinations and twelve special stations to test your logical thinking with a progressive difficulty scale. Each level presents you with a section of the landscape and a series of stars that lie within. There are also a number of stations, with easier levels only containing one to more challenging levels that contain multiple styles. From these stations, you then need to plan and build a track in order for your train, or trains, to traverse the landscape and pick up all of the stars. 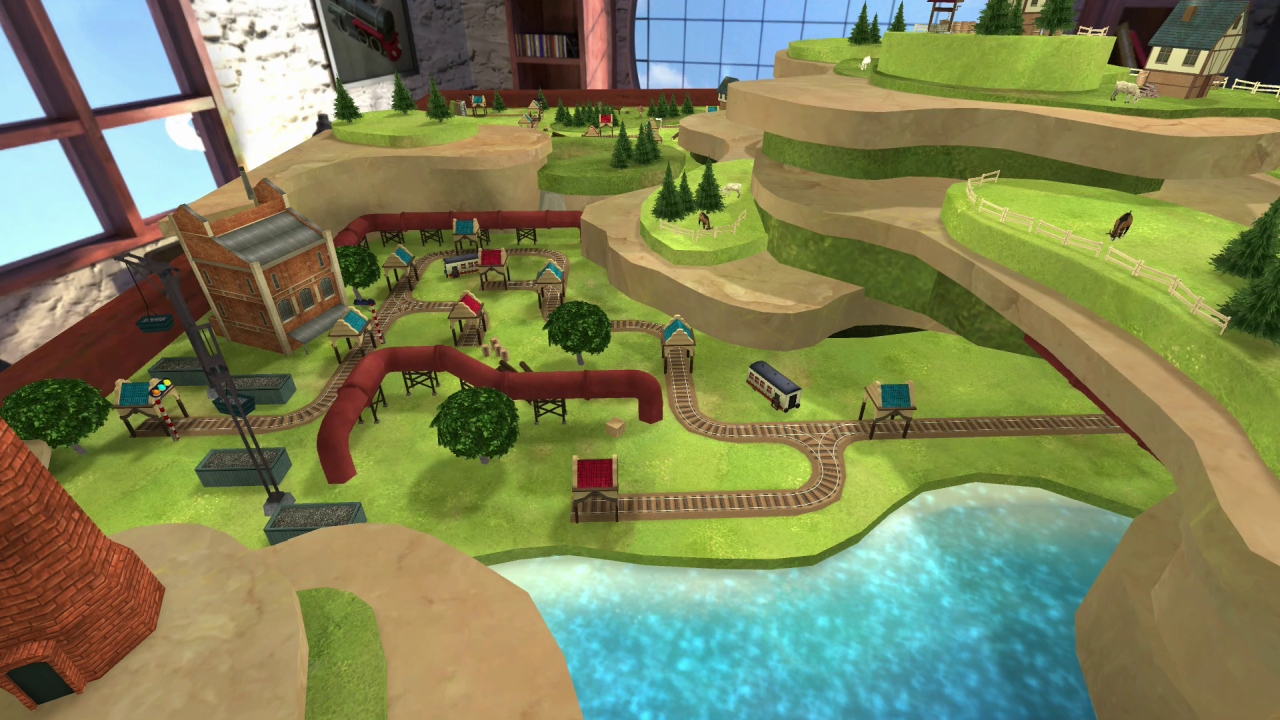 It all starts off at a gentle pace. However, progression also brings variety, with coloured stars and trains, junction points, turntables and tunnels. With these extra elements, you need to build a variety of tracks to ensure each coloured train collects the stars that correspond with their colour; all the time being mindful of other trains on the track in order to avoid any on-track collisions. This is where the junction points and turntables come in, although a rise in difficulty also follows. Complete each of the tasks within each level and you are awarded a set of signal lights, from green to red; unlocking the next station or level, as well as a series of challenges that require a bit more strategy.

Each of the levels can be approached in any way you see fit. Although the stars on each level reside in a set position, the layout of your track can be constructed in a possibility of ways. You start out from the station, building a series of straights and curves that can be evolved into forks and cross-sections. Once you are satisfied you have built a suitable track, you can set the trains on your rail and watch them as they leave the platforms, traverse around your track and reach their final destinations back at the stations. With singular trains, its premise is easily navigated, but with multiple trains, you need to keep a wary eye on signal changing in order to designate track selections and train directions.

To help with track building and train tracking, you can employ a number of camera angles with which to read the current situation. A bird’s eye view provides a perfect viewpoint for track laying and building, as well as monitoring the progress of your trains. However, you can also view the action from an isometric position, which gives the viewpoint as if standing within your attic and watching your modelled creations come to life, as well as a first-person view that actually puts you inside the locomotive. As well as adjusting track points and turntables, you can also control the speed of each train, as well as let off steam with a toot of your whistle. 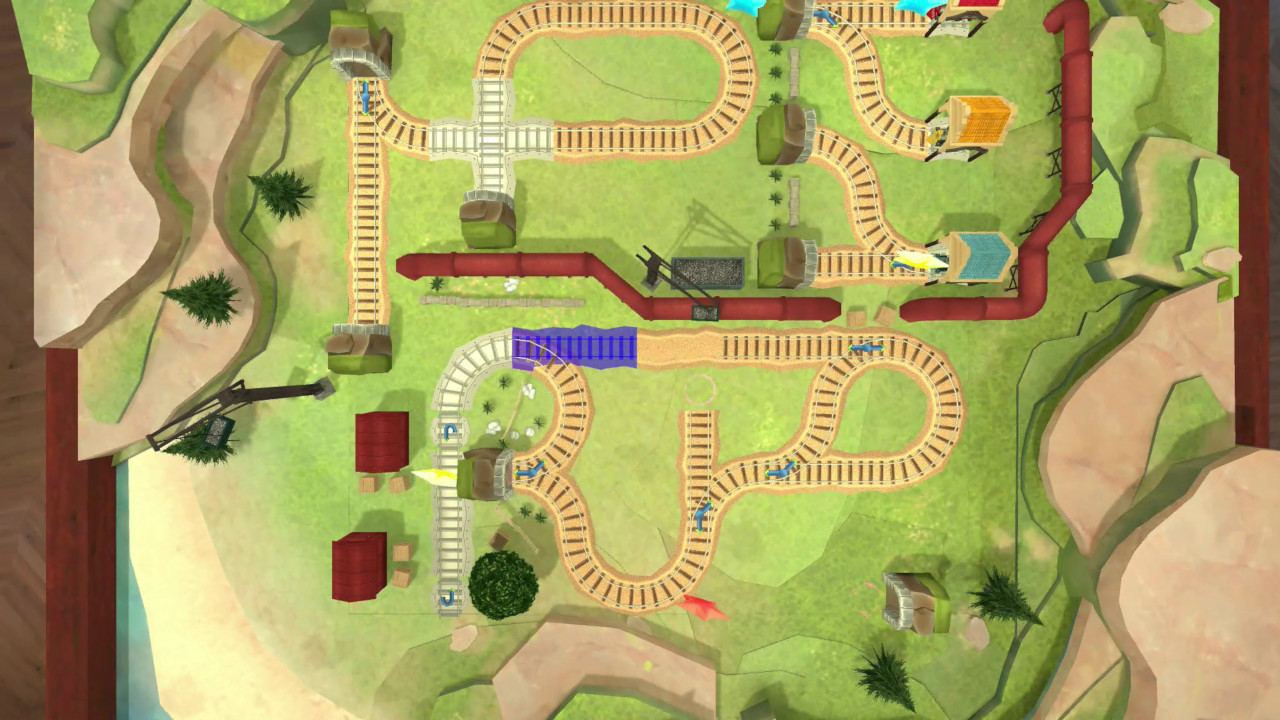 One thing that the game does really well, is convey a feeling of really playing with toy-trains. Each of its viewpoints presents a satisfying immersion from standing within your attic to shrinking down to size to stand within the engine room of your trains. The control options are even presented on a dashboard that replicates a control box that would be wired to your model layout. From here you can select camera angles, stop and start your trains, adjust speeds and zoom in and out of the action. It’s a very clever technique in controlling the action and one that adds further to the immersion. You can also survey the attic around you, allowing you to view the whole of your model landscape, look out of the skylight, view a framed list of credits hanging on the wall and a series of shelf-stacked trophies that act as in-game achievements.

The ambience of the game has a serene setting, with gentle sounds that replicate the area of map you currently reside in, the whistles of the trains and a clickety-clack of running around the track. This is further enhanced by the game allowing you complete freedom to design your tracks and accomplish your goals without any time constraints and forceful mechanics to rush the whole process. It creates a very calming game that can be played at any pace, as well as provide a very satisfying backdrop for train enthusiasts and puzzle fans alike. Its only downside is the navigation of selecting your stations and levels that shows its roots from within a virtual reality setting, but in all honesty, its only a minor gripe.

Overall, Mini Trains is a delightful puzzler that brings back the innocence and intrigue of a child playing with their toys. However, it also holds enough for any model or train enthusiast to fall for its immersive charms. All of its mechanics, from track building to train controlling are nicely implemented and easily picked up and along with its freedom in building and no time constraints, allows for a relaxing game that can be played at any time. Its level of difficulty is also nicely balanced, although later levels do provide a stern challenge with a spaghetti junction of various stations, trains, points, signals, turntables and tunnels, but then again, beating these tougher levels does provide a good sense of achievement. In fact, it’s so pleasant, that some may possibly find it boring. However, if your hobbies revolve around puzzle games, modelling, trains and even video gaming, then there is a lot here to entertain you; ensuring this will be a station that you’ll want to pull into time and time again.