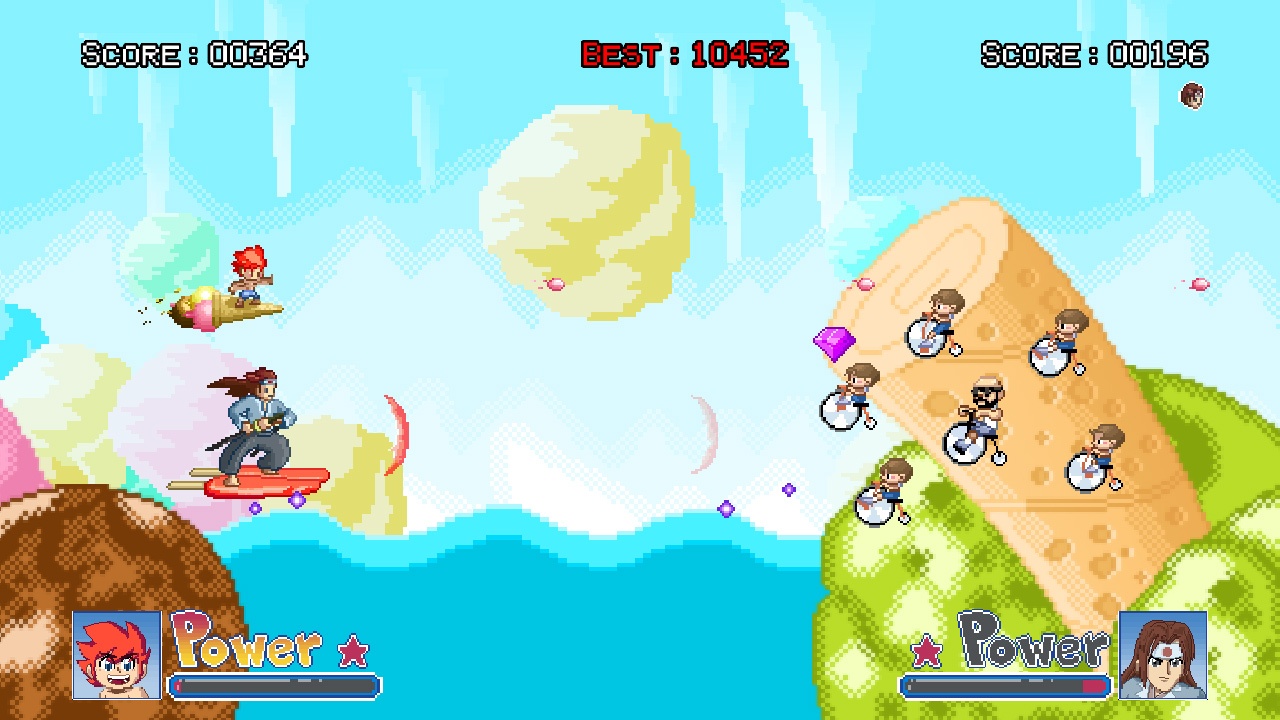 Sometimes it’s easy to forget how big the Internet is, especially if you’ve been around since before it was a widespread thing. Growing up with no Internet and, later, limited dialup, the sheer scope of things and the full reach of the World Wide Web is often beyond my own comprehension. YouTube is still something I don’t fully understand as a monetized platform where people can make videos of opening boxes and then get paid for that. Whatever. But then I come across a game that I’ve never heard of, find out it’s been released on multiple platforms, and is based on a web comic that was released in three different languages at once. Does that necessarily make for the best game? No, but it’s certainly interesting, and I have to admit that I’m at least interested by the world of Ice Cream Surfer.

Ice Cream World is a pretty happening place, full of sweets and generally chill people. But Broccoli (hard B) is a dude who can’t understand why kids don’t love vegetables, so he sends an army to invade the world and destroy all yummy things. Ice Cream Surfer, our titular character, has a gang of five people (called the Cream Team) who all team up to fight back and protect deliciousness at any cost. Alone or with a friend, you surf through six levels of horizontal shooting, fighting back against the bad guys and keeping things tasty and joyous. 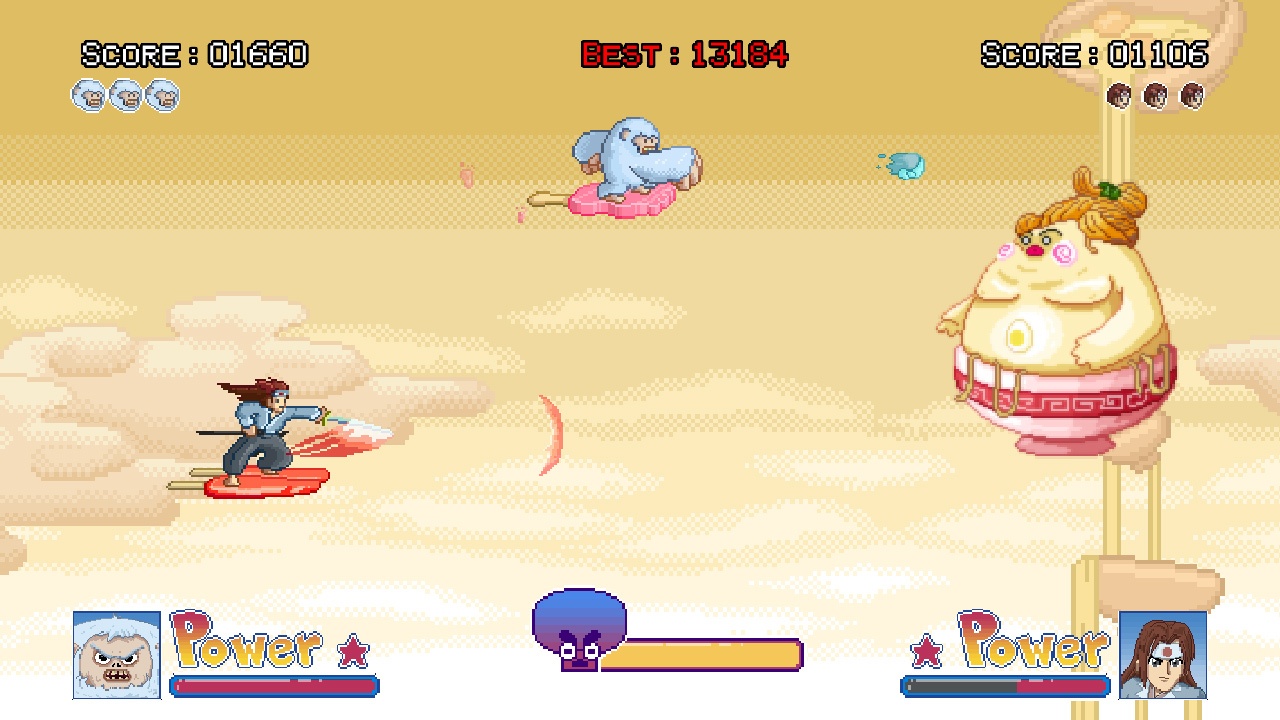 First and foremost, this is a novel idea, and it’s a cute one at that. The idea of surfing along oni an ice cream cone is dandy, and the other characters are even cooler. There’s this Superman ripoff who has an ice cream sandwich for a body, and there’s an abominable snowman who rides on what looks like a modified Klondike Bar. There’s nothing not to like about the appearance of the characters, other than the graphics look a little rough. A quick check shows that this game has been made on the WiiU (reviewed here), the 3DS and on Steam, and probably other places that didn’t appear immediately. The graphics may have been ported over and slightly improved, so that’s where the edges come in. No problem, as long as it plays well, things will be okay.

Off the bat, there’s this weird difficulty balance that comes into Ice Cream Surfer. You can choose between easy, normal and hard, but easy is way, way too damn easy. The enemies are sparse and weak, and there’s nearly no challenge to the game whatsoever, so you quickly ratchet things up to normal. But then normal is hard until it becomes easy, if that makes sense. The hitboxes for your character are a bit stretched out, so you might not be able to know you’re dead until you’ve already hit the floor. So you concentrate hard to dodge and get the popsicle power ups to improve your primary shot, and as soon as you get it to a good level the game stops being hard, or even challenging. You just hold down the fire button and move slightly up and down to avoid incoming shots, and mixing things up a little for boss fights.

But that’s only if you’re Ice Cream Surfer. Each of the other characters has this weird handicap to them that didn’t make sense to me. Snowman has a limited range that improves, Superman can’t seem to ever get powerups, and the samurai dude has basically a melee attack that just gets worse the more you get popsicles. The magical girl chick who rides on a vanilla/chocolate twist is cool, but her shot makes this high pitched noise that gave me a massive headache after a couple of minutes of playing. The sound balance of the game is all over the place, and is excessively tinny and poppy, but not in a fun way. It’s like if the music and sound effects were downsampled to work in a 16 bit machine and then just amplified when they ported back to the Switch. 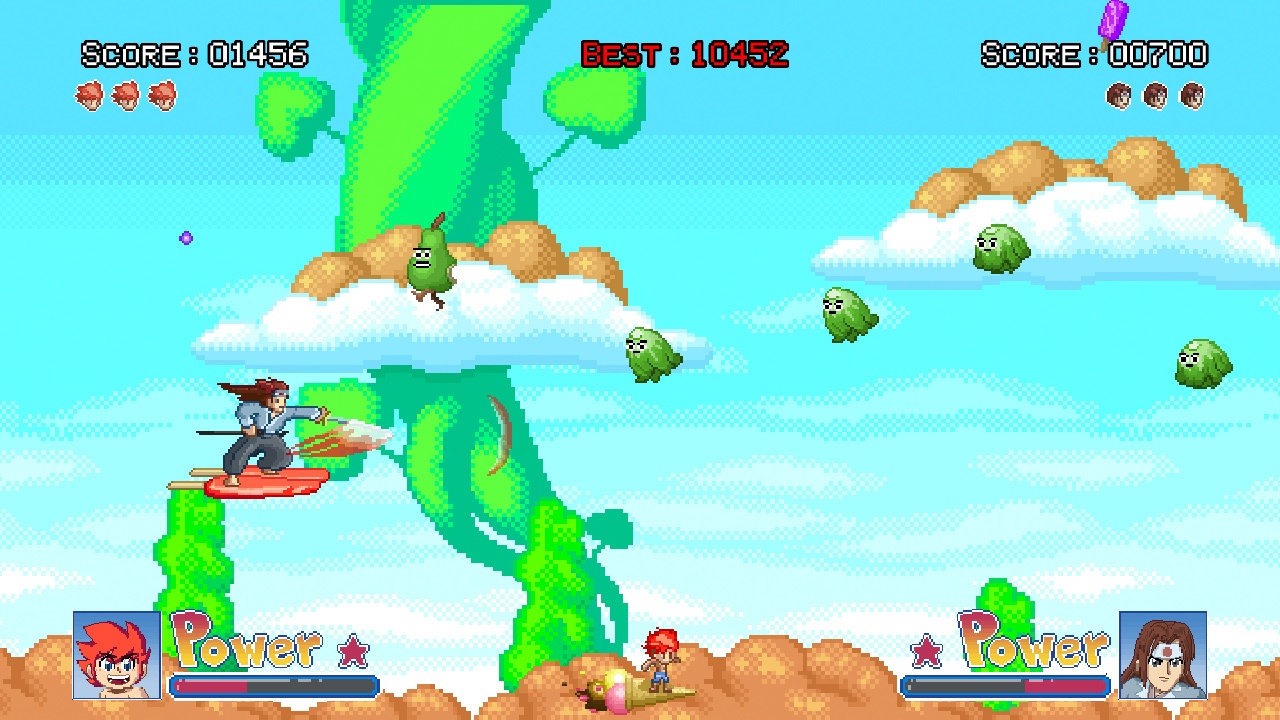 For some reason, one of the things that upset me the most was the cohesion. Alright, Broccoli hates ice cream and invades with an army of sweets, fair enough. First boss is a seal pup. Why? Why does the seal hate ice cream? Second boss is a giant fruit golem that the Broccoli is actually piloting, which is doubly confusing. Do kids hate fruit too? And why would the Broccoli put himself on the front line? But the third boss is a frigging frosted pink strawberry cake! Hold on, you hate ice cream, but you still managed to get a cake to be a goddamn turncoat? It’s not even a proper fruitcake which at least plays into tropes about fruitcake, it’s a sugary, creamy pink cake! These things shouldn’t bother me so much, but there’s a massive, massive world of vegetables and I’ll even say wheat and grains that could have been used as enemies, but it’s clear that we wanted to go with cute despite all other information. Why did I have to shoot sushi? Kids love sushi!

Front to back, Ice Cream Surfer wasn’t a terrible, not even a little. The graphics were rough, the hit boxes were wonky, and the difficulty felt skewed. I didn’t like the music, but I did like the powerups, and the gallery unlock pictures that you got were cute. The whole game can be banged out in under an hour, but there’s replayability with the different characters, who do have a nice amount of versatility for different play styles. The super power up attacks never felt necessary, but it was nice they were there. The problem is that, when I put down the game, I just forget about it. I consciously finished this game and then played something else instead of just leaving it at that. When ice cream is supposed to be cold and sweet and the whole think feels lukewarm, you know it’s a problem. Also, I know porting isn’t cheap, but when this game is under three dollars everywhere else, eight is a harder pill to swallow just as Switch tax.