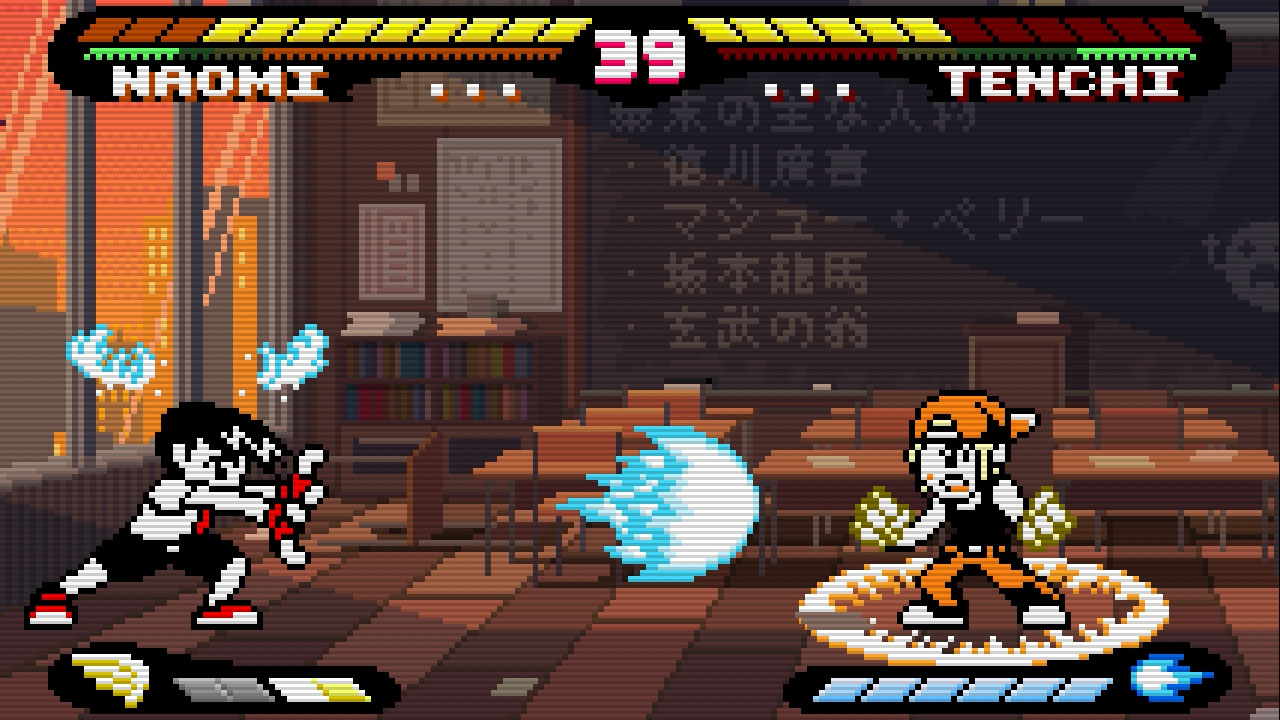 The biggest surprise I ever had in my life was the evolution of fighting games. As someone who grew up when Mortal Kombat was causing moral panic and kids were wrapped around the block for Virtua Fighter, I loved playing and watching matches unfold in the brilliant 2D presentation. Especially for someone who had fast fingers, early fighting games were the best: being able to just spam Chun-Li’s lightning kick or E-Honda’s hundred hand slap and force people into corners was my favorite way to play. But the fighting games have evolved, big time, to incorporate insane levels of skill and planning, anything from memorization of massive combos to understanding the intricate routines that can break, reverse and outright destroy skillful opponents. It seems like Chucklefish wanted to both help new players and reward the greats in one swing, then, with the release of their homage-laden Pocket Rumble. But don’t be fooled by what the taglines may say: this game is a monster.

Pocket Rumble unabashedly wants to inspire the graphics and aesthetics of the Neo Geo Pocket Color, one of those amazing handhelds that never got the traction it deserved in the United States. Utilizing a surprisingly strong processor and a beautiful mini display, the Pocket Color stands proudly next to the Wonderswan Crystal as one of those units that you may have never heard of but fell in love with when you met them. Anyways, Pocket Rumble is out to carve its own path and lore: none of the characters you see here are from a previous game, but damned if they don’t feel like they belong precisely in a fighting game. You’ve got a bit of everything: a swordsman with a dark past and a big hat; a cute girl with a lovely dress and a demon cat; a cyborg(?) dude in a suit with a smooth demeanor; and the angry ghost of a dead highschooler who takes over the body of whomever she defeats in combat. These are just a few of the Pocket Rumble entities, and you’ll learn to love and hate them all in equal measure. 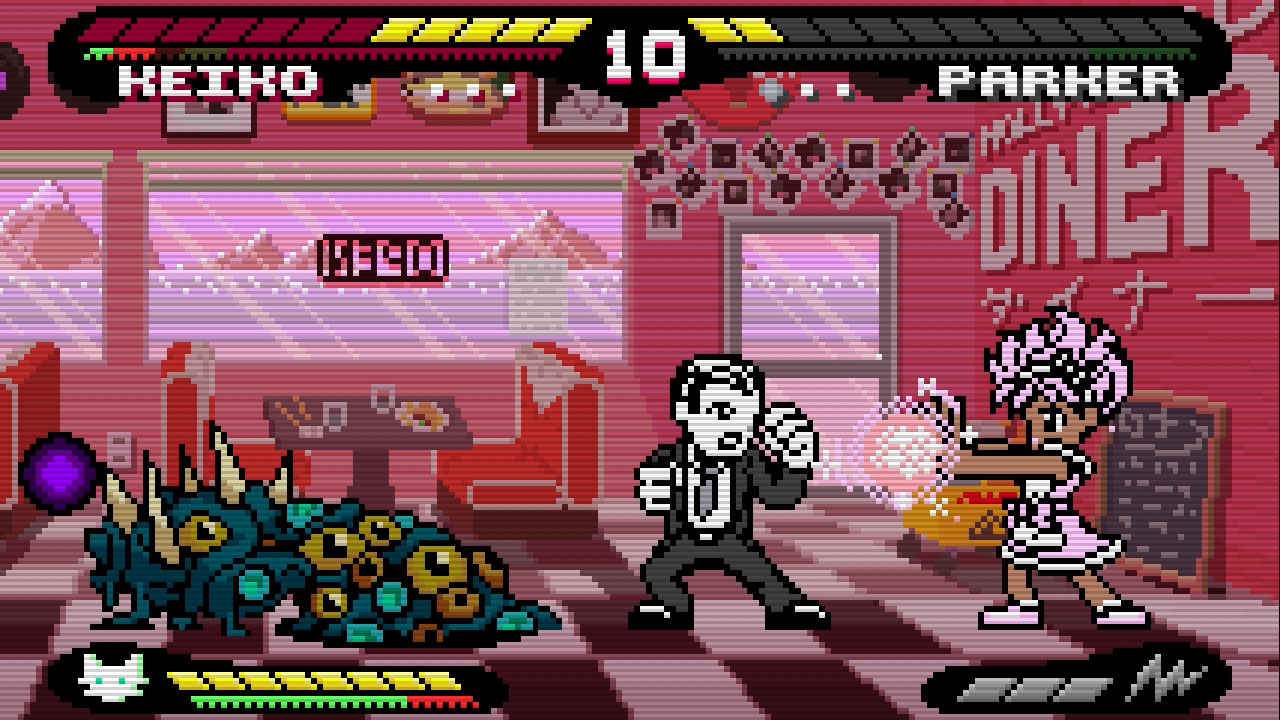 Pocket Rumble’s grand claim to fame is being simple, and, in mechanical terminology, it is. There are only two buttons to think about besides the joystick, and all actions come from this. Longer holds can equal different actions, and shorter can be for faster. Some of your moves change in mid-air, and some do not. Some characters have a ton of ranged attacks, and some are almost exclusively melee. Double button pushes can result in some things and…well, frankly, I still am a bit flabbergasted by the sheer range of attacks and types of skill that goes into this game. Even though the buttons are simple, the folks of Cardboard Robot Games are treating this with precision and care that only some seriously seasoned veterans would input. The outcome is a support of the original mission statement – a simple enough game for beginners to learn – is accurate, but I would argue that things take a turn very, very quickly.

This is because the AI of Pocket Rumble is legit, and it expects you to be too. The first character you’ll usually fight against is Tenchi, a fireball throwing, speed bagging upstart who is one of the most well-rounded characters in the game, and also one of the most difficult (in my opinion) to deal with when starting our. He has all the finesse and confidence of someone who is a computer, and, surprise, he is, and he can beat the ever-loving hell out of you. Players who are unfamiliar with the game should definitely take some time in training and practice to get a feel for the character they love best before diving into things. Even if you see a character do great in AI matches or online, don’t think that it’ll be a breeze to obtain that level of skill “with only two buttons.” There is serious, real strategy happening here, and it can and will blindside you.

Once you get a feel for things and start to understand which character works best for you (Quinn when I’m feeling alert, Subject 11 when I’m feeling mashy) you’ll be able to really appreciate how much has gone into this game. Despite having some beautiful, nostalgic, retro graphics, this hums along and buzzes in fluidity, with no drops in performance or appearance in handheld mode. You get into a groove and a combo set and you simply fly through, dropping character after character in either the arcade mode (for a more traditional take) or career mode (when you want to challenge yourself in punishment). The response time is deadly accurate, allowing for combos to be pulled off and interrupted with split second windows to succeed or screw up. I was honestly astonished by how real this game felt in terms of fighting, and I started to think that I was getting pretty good at things. And we all know what it means when you get good: it’s time to head online and try your hand against other players. Pocket Rumble has gone out of it’s way to make sure that online matchmaking, either ranked or invite, is smooth, with minimal delays. My internet wasn’t the best recently, so I apologize to any of my opponents if the lag was coming in on my side. Damn Comcast speeds. 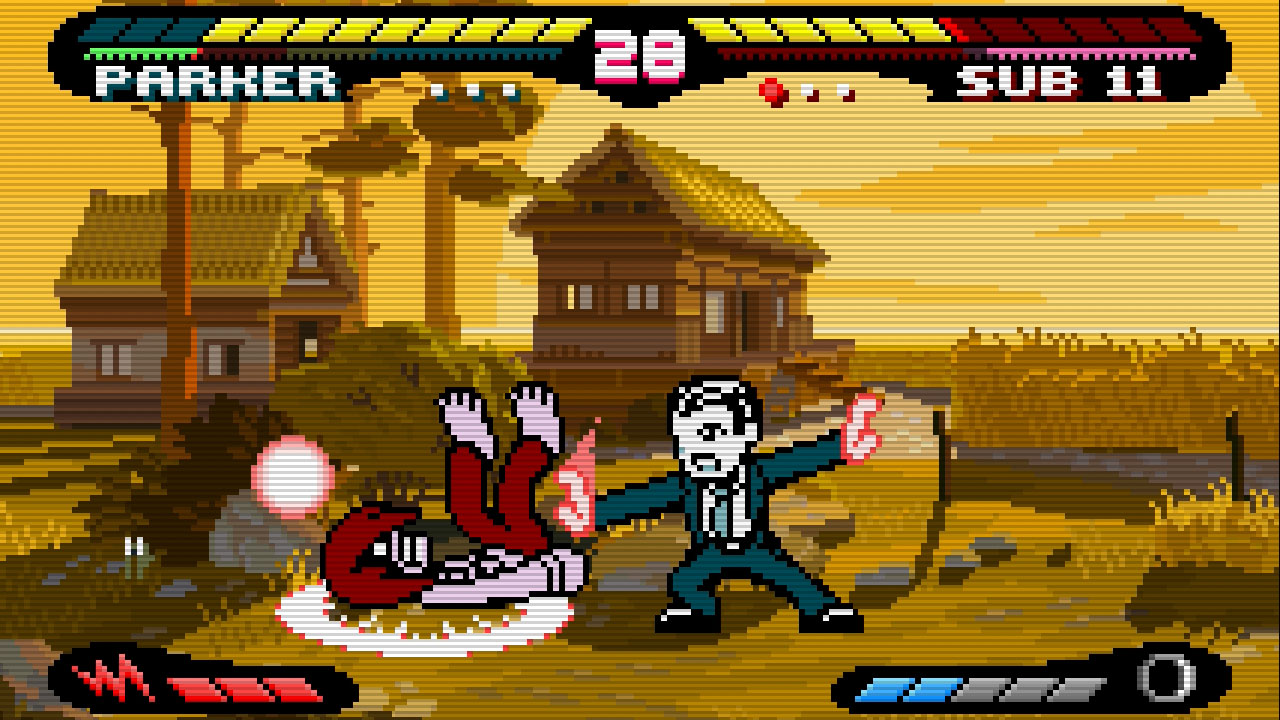 But online is also important to remind you that you ain’t worth nothing. Holy crap, nothing humbles you like going online and meeting someone who mains as Keiko with the confidence of a mass murderer. I’ve tried Keiko all of three times, and every time I manage to make my cat explode in the first three seconds of the match, usually damaging nothing, and then I die in the corner. Online Keiko there operates her cat-like a second player, effectively pincering me into a two on one battle with no recourse. The way people just lock you into endless combos with Hector, Parker or Naomi are insane. I don’t know if I’m going to go back into the online arena anytime soon, and I don’t think I can play my Switch sitting under a waterfall, so I’m not sure the proper way to train at this point. Maybe crying, I’ll try crying.

The only downside I have to say about Pocket Rumble is that I’m concerned it’ll impact the Steam version in a negative way. When games start to branch out onto console, players are now at the mercy of update procedures from the central servers that are definitely not as friendly as Steam. As we just saw with Angels of Death, it can take weeks for a simple bug that everyone is aware of to be patched, as Nintendo needs to approve and publish the update in their own sweet time. Pocket Rumble is certainly still early access, and several of the bells and whistles that Kickstarter backers were promised (extra characters, boss characters, etc.) haven’t yet been implemented. Players who invest at this point should just be aware that the game may have more to come, but the question of when and how is totally up in the air. Still, I do really appreciate Pocket Rumble launching on the Switch at the same price as Steam: that’s pure class.

And, for fighting fans, this will still be a fantastic opportunity to bring a great fighter on the go. Things like Street Fighter and the upcoming Skull Girls are amazing in their own right, and I’m not trying to downplay them. But, like when you simply need a good, quick fix of a game, Pocket Rumble is there, and it’s more than just superficial punches and kicks. A really well-balanced and thoughtful fighter crammed into a tiny package, Pocket Rumble is one of the best surprises I’ve found published to the eShop so far. Highly recommended.