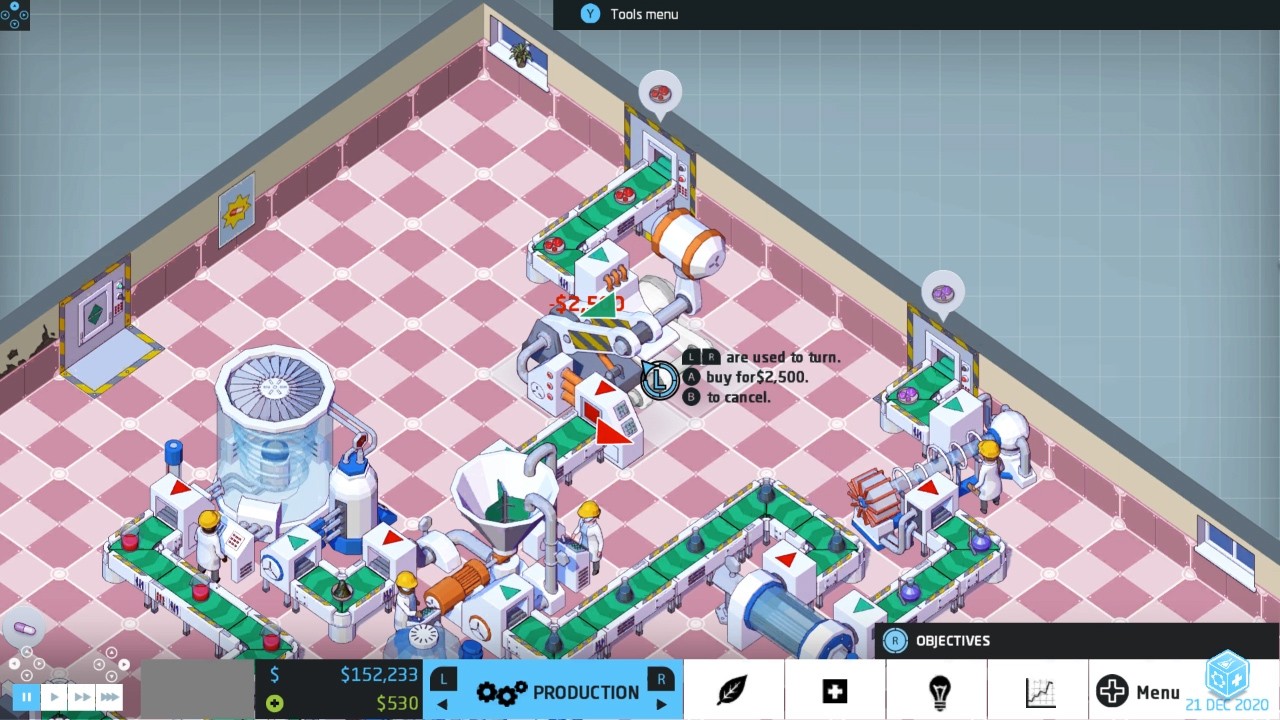 When the words Big Pharma are mentioned, there are always connotations of conspiracy theories and profiteering.  But for fans of video games, we can now enjoy a portable version of Twice Circled’s drug development simulator.

So on first glance of the advertising media, it’s clear that this game brought back memories of playing Theme Hospital in my youth, and indeed its spiritual successor Two Point Hospital. The parallels are weak at times, but include having similar in-game graphics and mechanics; as well as the obvious medical setting all contributing to a nostalgia factor. However, there is a slight problem with Big Pharma. It hasn’t ported well to the switch, or aged well since it’s PC release.

OK, so lets start at the beginning. The tutorial seemed like the best place to begin, pick up the mechanics, learn the ropes and then onto pharmaceutical world domina….

*Ahem* anyway, the tutorial suffered from two issues. The first is that visually, it is incredibly hard to read in handheld mode and this didn’t improve much when stretched onto a big screen.  Unfortunately, there is no option to increase the text size, though there is a function to zoom in and out into the game area itself. Alongside this is the ability for screens to overlap. I found it incredibly frustrating when told to “look at this function now”, only to find that to do so I had to close the tutorial and reopen it.  Alongside this, there are times when the tutorial uses different keywords to those used in the game. These issues with keywords mostly focused around terminology linked to the industry, which makes things difficult as my default position was to identify an exact word or sentence only to wonder if the similar sentence had the same effect.

The second problem I encountered with the tutorial was that everything is given to you at once. You are taught how to change the concentrations of drugs, mix chemicals, add catalysts, research new ingredients and technologies; but once I entered the main game, I felt a bit lost for a while. Perhaps, as in some similar games, exposing the player in increments, with a relevant guide, would have been a better choice here? 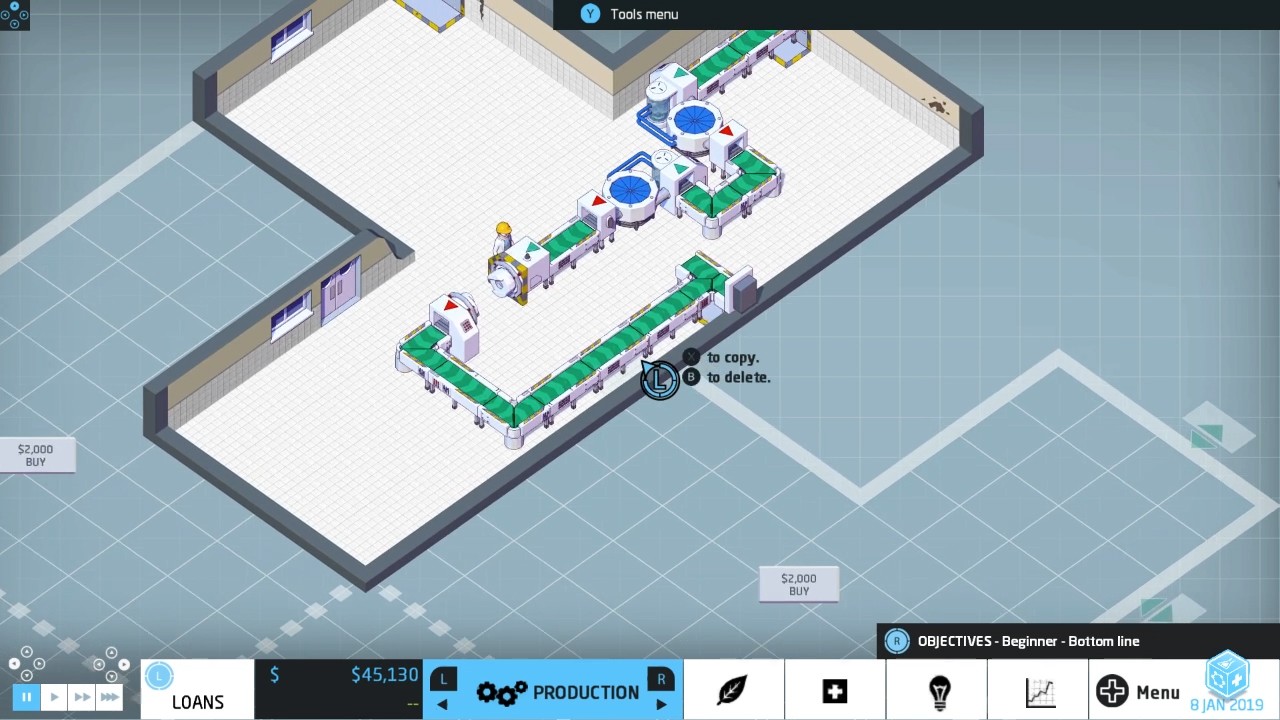 That said, once a few hours were spent I clearly… still struggled. The basic premise of the game is interesting. You start with a raw material and you alter it’s concentration using a variety of machines.  Starting from simple dissolvers and evaporators to more complex items such as the shaker and ioniser. The game includes the ability to upgrade these as well as use a variety of other tools to combine and alter medications before turning them into pills and shipping them.

This leads us into the game’s first real mechanic. In order to make your own wonderdrug you are focusing mainly on two areas to begin with. The drug’s concentration effects how good it is at treating a specific illness, but also has an impact on the undesired side effects. This creates a need to balance the machines you use to either make a drug with no side effects, or one you can hope no-one notices while its on the market. The drugs you make are graded based on how well they perform and this can affect the amount of money you make.

The game feels more like a puzzle game at times because of the specific placements of machines and belts to join them. I often found myself having to plan routes out in my head to ensure medication makes it to the appropriate station, then cursing myself when I had made a slight miscalculation. The lack of an “undo” button or even a “wipe the slate clean” function makes this more frustrating than it needs to be.

The second main mechanic of the game is a finance/resource management element. I found this a lot easier to navigate. Your actions in-game earn you various points which you can use to upgrade ingredients and equipment. You spend money to hire and deploy adventurers to scour the depths of the jungle , and later desert etc., in search of new chemicals to harvest from the world. You can also deploy researchers to unlock and enhance equipment and other areas of the business as a whole. The aim of this is to stay ahead of the competition. Other pharmaceutical companies will often release chemicals that do the exact same job as yours to compete, world events will change public opinion on issues that directly and indirectly affect drug sales and you are in charge of balancing the books. The traditional methods of taking out loans when struggling are here and this portion of the game feels very similar to other titles in the genre.

Once you’ve built up your level of confidence, there are a number of themed missions to work through, ranging from beginner to advanced. There are also scenarios that give you more or less in terms of equipment, ingredients, money and space, as well as some missions where everything is unlocked for everyone from the start. The game also has a custom game and free build functions which extend the life of the game further. 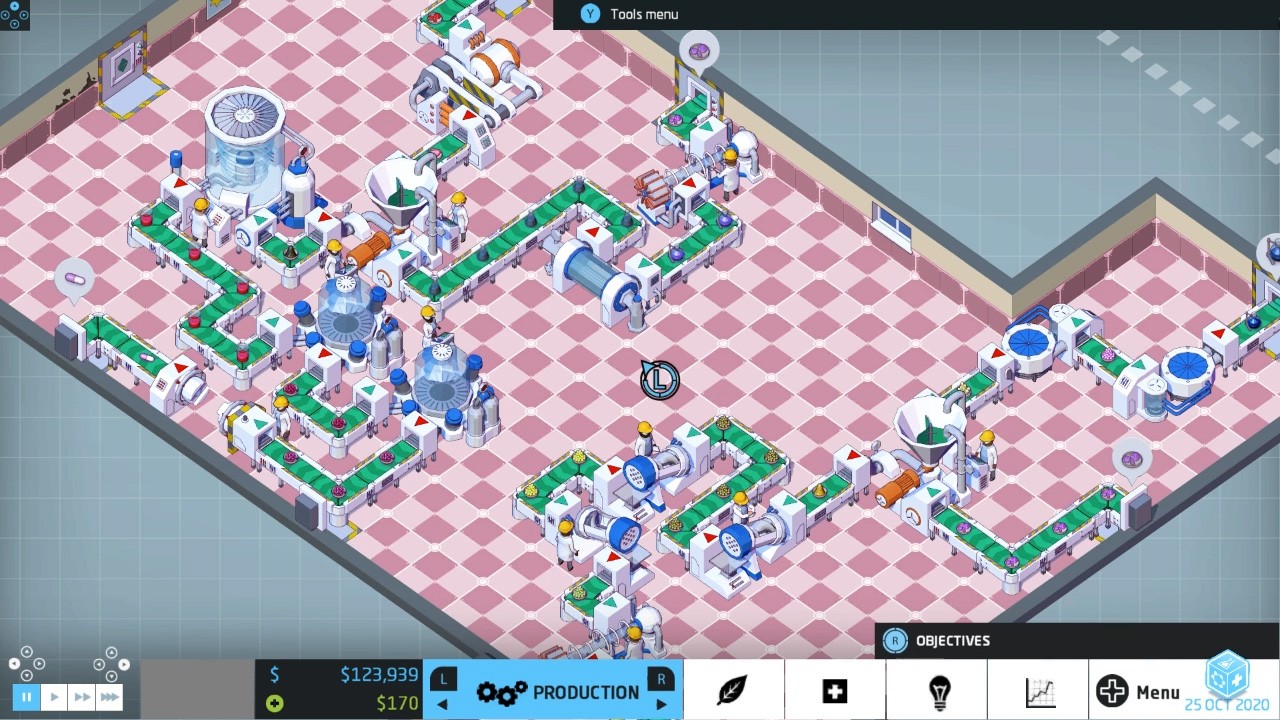 Graphically, BigPharma will not be winning any awards, but that said it isn’t a game without charm.  The areas are laid out in a 2.5D pixel art style reminiscent of most “tycoon” or “theme” games in the genre. Also like these games, they lack the ability to rotate the camera, which created some issues in gameplay. However, there is the ability to customise the belts used in game. This not only helps to track the movement of chemicals around the map, but also adds to the charm. Characters used in game are a modern, animated variety that reminded me of the assets used by companies making board game ports for the switch. The biggest issues with the graphics fall on being able to interact with the text. a text heavy game needs to have more space devoted to it when using a Nintendo Switch. Clearly this wasn’t changed when developing the port.

The same complaint links in with the controls. These were not intuitive in the slightest and even after hours of tutorial and main game missions I found myself accidentally placing belts or machines and having to navigate menus to correct issues or find items. This didn’t change when using a pro controller on the big screen and the game doesn’t make use of the touch screen controls with the exception of inputting a company name.

The game has some simple chiptune-esque tunes along with similar relevant sound effects. They didn’t get to a stage where I wanted to mute the game and use my own background music and on the whole they fitted the scenario they were attached to.

In conclusion, Big Pharma was a game with a lot of potential that falls short. Its so hard to not compare it to more user friendly games that exist in the genre and at times, I found myself genuinely frustrated at the puzzle elements rather than the simulation provided by the game. However, the challenge is what made this game slightly addictive. The desire to complete the puzzle and the associated satisfaction meant that I wanted to play more. Unfortunately, this is short lived when you are faced with the same puzzle related problems time after time. Where do you place this machine? What about the belt track? No! Now I need to delete it all was too common a factor.

It is clear that this game has been quickly ported across to the Switch, with little variation from it’s PC counterpart, which is a shame for a game four years old. Perhaps issues weren’t picked up as easily when using a mouse and keyboard, but things like text issues should really have been ironed out at QA testing. Perhaps they were and no answer found that could work. However, the minor inconveniences are what prevent the game from doing better. There are just more games that do the same thing to a higher standard.

Big Pharma is an addictive addition for anyone who is already a huge fan of resource management / simulation games.