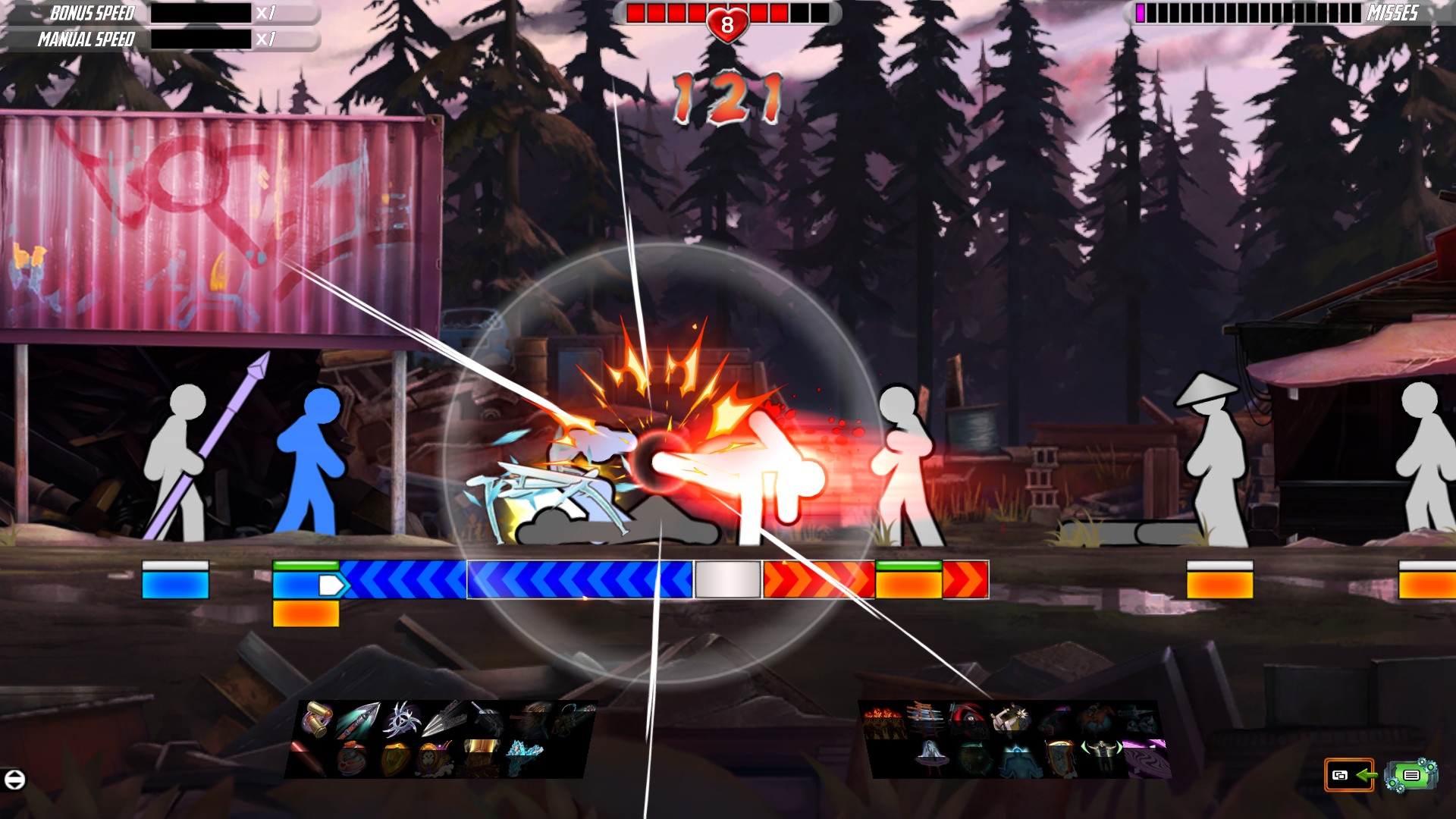 Imagine combining every kickass scene from every kung fu movie ever made and squishing them down into a single badass game. Now imagine that game, let’s call it One Finger Death Punch, had a baby that was even more badass and epic and called it One Finger Death Punch Jr. No wait, it’s a video game, so it gets a number: One Finger Death Punch 2! This baby pulls no punches; it’s a brutal ballet, a quickstep of carnage, a waltz through warfare that uses a single finger to kill tens of thousands of enemies. In fact, in the few days I spent playing it, I killed 63,963 enemies with just my thumb. According to Wikipedia, that’s more than the population of the Cayman Islands!

For those not familiar with One Finger Death Punch, easily one of my favorite Xbox Live Indie Games back when that was a thing on the Xbox 360, the game is incredibly simple. Your goal is to take out dozens or even hundreds of enemies all by yourself by pressing the left or right arrows buttons (square or circle on the PS4 controller I used). Pressing one or the other will attack an enemy in one of the two directions, and if one of them is near enough you’ll hit them. If not, you’ll miss, leaving yourself open to taking damage. There are some variations on the formula depending on the level, there are skills to unlock, weapons to use, thrown weapons to deal with, and there’s a ridiculous amount of flair on top of it all, but that’s really it!

One Finger Death Punch 2 is a game about rhythm. Enemies approach from each side, and you get hit when you miss or when you let them get close enough to hit you. But hey, you’re a master of martial arts so you won’t let that happen, will you? You’ll be strategically bouncing back and forth, slaughtering countless waves of stick figure foes as they come at you. They’ll bring weapons, they’ll hurl projectiles, and some will even require you defeating them via a brawl that has you pressing the correct buttons as they drop down the screen. But you’ll fight back, deflecting or even grabbing those projectiles to use them against your foes, taking weapons from defeated enemies, and using dozens of passive skills that can clear a whole screen or destroy brutal “boss” enemies with a single button press. Few games make me feel as cool as punching a few enemies to death, deflecting a ninja throwing star back at the guy who threw it, catching a sniper bullet in midair, using it to load my own sniper rifle and then firing it, taking out 3 enemies approaching from one side before slamming the ground and creating an earthquake that takes out the rest of the enemies, ending it all by picking up a discarded laser sword and killing the especially dodgy enemies with one hit each. 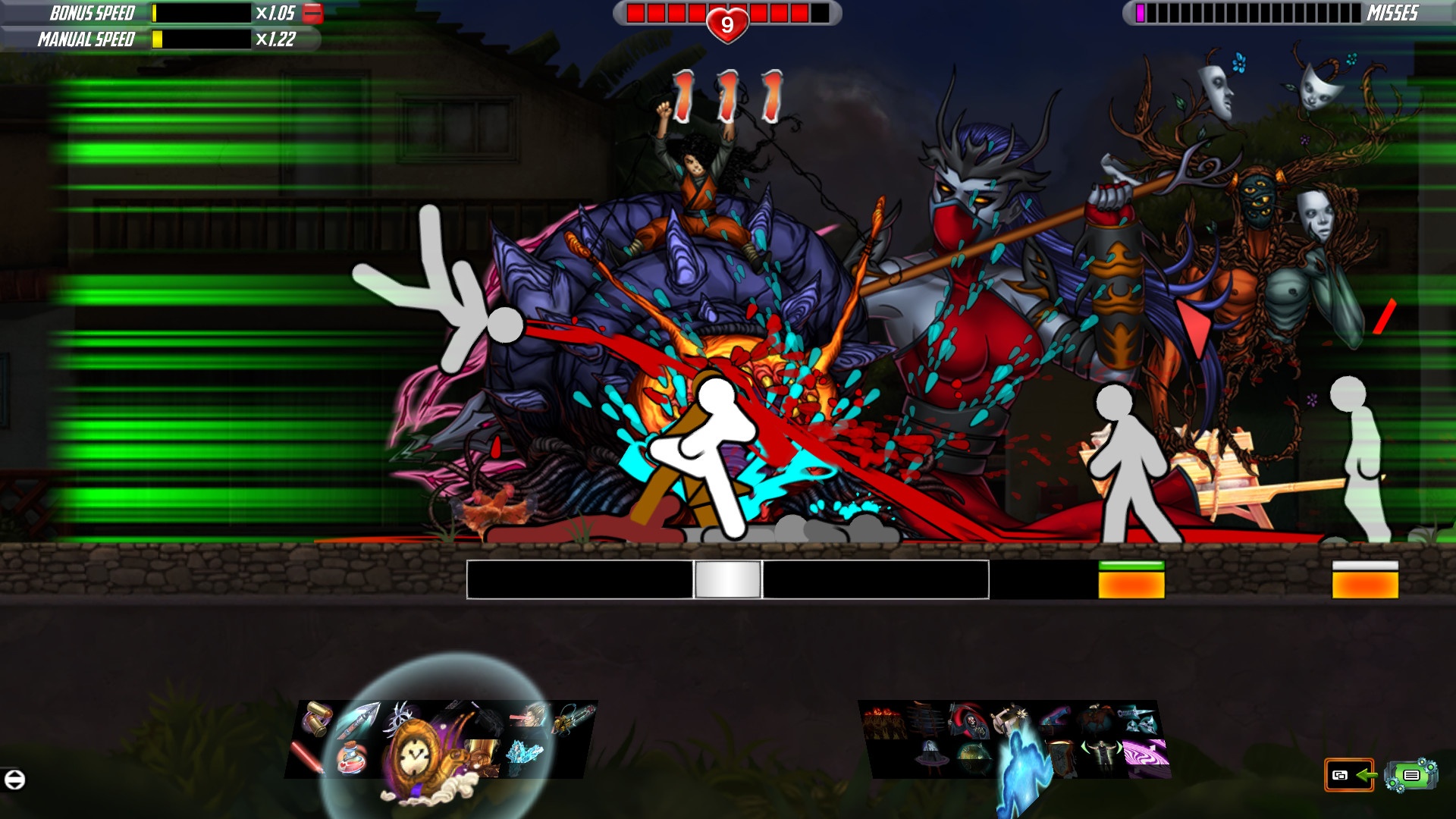 No game captures my focus and puts me in the flow of epic combat like the One Finger Death Punch games, and that includes this sequel. Your heroic stick figure protagonist moves around with such style that it’s mesmerizing to watch, and you can easily slaughter hundreds of enemies without even realizing how much time has passed. Despite the game using stick figures for the player and their foes (now with a few options for shading and coloring and even EYES for the stick figures!), the animations are terrific, and the sound effects really capture the badassery. I typically play games muted because the sound effects drive me crazy after a while, but they’re one of the biggest contributors to my enjoyment of One Finger Death Punch 2.

The game presents you with a tutorial to begin with that’s made up of 16 levels, and then you’re thrust into the main part of the game. The tutorials take you through everything in the game that you’ll face off against, which honestly felt like a bit of a backslide from the original. From there you’ll dive into the meat of the game: levels that guide you across numerous areas. While the backgrounds don’t really change the game, it was awesome having lots of levels to fight across. Depending on how well you do in a level, the game will raise or lower the “manual speed”, and some enemies that you kill in a level raise the “bonus speed”. This functions as a built-in difficulty level; if you’re incredibly good at the game, your manual speed will be higher than others, and you’ll have a challenge that’s custom made for you.

In addition to the standard “kill [x] enemies” levels, other levels will present you with additional challenges like taking out [x] special enemies with projectiles, defeating [x] enemies with the ball of death, defeating enemies while your attack range is reduced, or defeating loads of enemies in front of hazards for extra “gory” deaths. Then there were some I don’t remember from the original, like staying within two insta-death walls and taking out enemies while dodging insta-death saws that drop from the sky. And once the game is almost over, you get access to a whole new game mode that’s potentially endless (I’ve gotten to level 35 so far) and still randomly varies things from level to level (including a couple new game modes). There’s also a survival tower, a co-op mode (although it seemed broken for me as the second player’s input never functioned), and a gauntlet where you have to survive a slew of randomized levels across a board. Oh, and who can forget the “No Luca No” mode that literally puts a cat over half of the screen while you battle, blocking your review just like a real cat would! 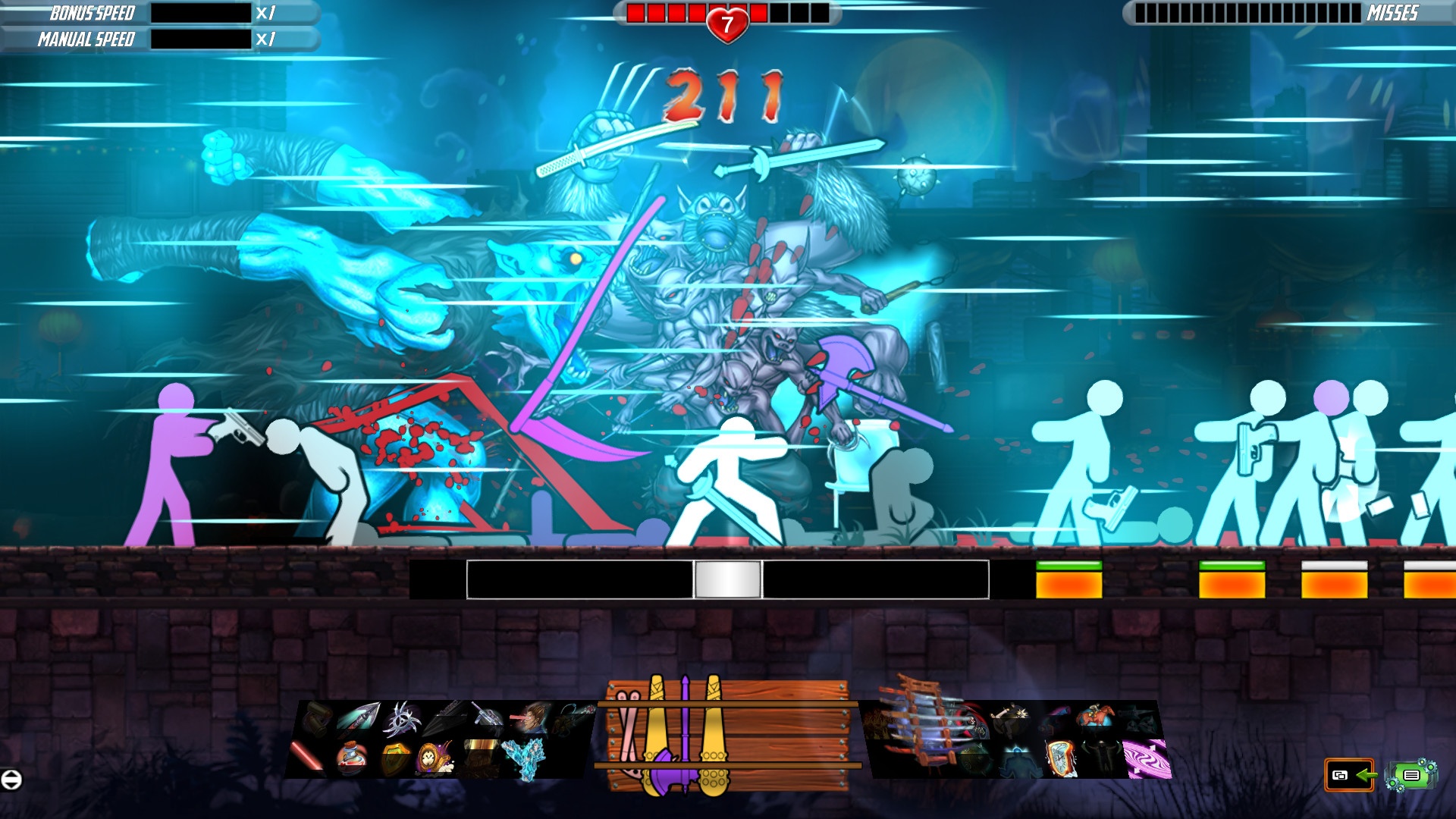 While the game has loads of game modes, the basic gameplay is mostly the same throughout. That isn’t a bad thing since the game does that one thing so incredibly well. But, sadly, I came across numerous issues with the game. In addition to the co-op mode not functioning right and the tutorial feeling too dragged out all at once, I wasn’t a fan of the brawlers. They’re the ones who show you a series of buttons to press, and if a bar hits the ground you take damage. Unfortunately, when the speed is high enough, it’s essentially impossible to keep up with even when it’s the same button over and over again. There’s a new quick time event battle that’s been added as well, and you watch your stick figure hero battle against a particularly difficult stick figure until you’re shown to press the corresponding button for what your enemy is on. However, unless the speed is the absolute minimum, I found myself losing these every single time. It doesn’t help that you have to succeed 4 times and it only takes 2-3 failures to fail it. Also, while the game gives you loads of skills to play with and even encourages you to customize them for various challenges, the only way to change them up is when you get a new gem or to go to the main menu. Having a “change your skills” button on the menu screen for at least the main game mode and the gauntlet would’ve gone a long way toward encouraging customization more. Oh, and the skills could have way better descriptions for what they do. Even after playing for 15-20 hours I still have no idea how to even play the horse minigame and avoided that skill altogether.

Finally, I came across a handful of bugs. At one point the game froze on me entirely while I was going into a “struggle” (an epic standoff between you and one opponent where you mash a button until you defeat them). The endless mode after the main mode is completed also has a bug where failure progresses you to the next level anyway, but then the next time you complete a level it sets you back one level above where you originally were when you failed. Finally, entering each level in gauntlet mode shows the number “10” for your health no matter how much health you actually have until your health total changes.

One Finger Death Punch was the game I played to wake up and get ready to work for a while after I discovered it, and I can see One Finger Death Punch 2 easily taking its place now. It’s also still a terrific game for unwinding and zoning out or getting rid of some frustration, and despite only giving it a rating of 8/10, it’ll almost definitely be one of my favorite games of the year. Anyone who loves action games, feeling like a lone warrior who can take on an army single-handedly, or just enjoys a game that they can dive into and feel a day’s tension melt away will get a figurative kick out of One Finger Death Punch 2.

Anyone who loves action games or just enjoys a game that they can dive into and feel a day’s tension melt away will get a figurative kick out of One Finger Death Punch 2.