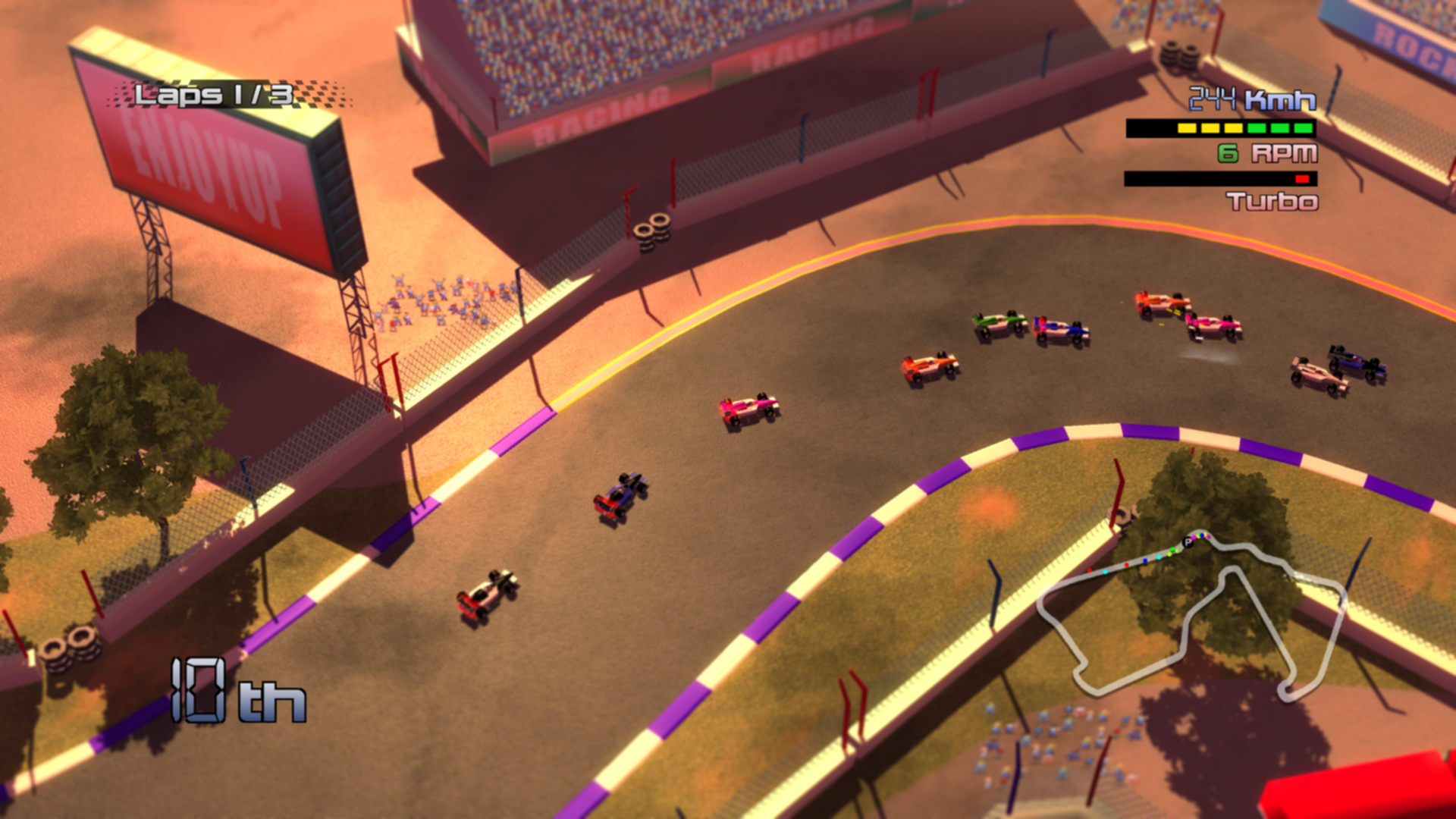 Mixing rock with racing sounds like an idea that can’t fail, the revving of the engines interspersed with rock and roll should be a match made in heaven, you wonder why it hasn’t been brought together before. Well this is what Grand Prix Rock ‘N Racing brings to the track, the question is whether racing and rock works in practice…

Grand Prix Rock ‘N Racing plays from a top down perspective where you race over ten tracks covering ten different countries. Points win prizes so the further up the field you finish the more points you get, these not only increase your chances to win the championship but also it gives you the opportunity to improve your race car. It’s a fairly simple premise, you race around a track trying to finish first. In your first season your car is terrible, you’ll be really lucky to finish in the top ten in any of the races so it’s highly unlikely you’ll win the championship in your first season. There isn’t many gaming options besides time trial and the championship mode which unfortunately limits Grand Prix Rock ‘N Racing potential. 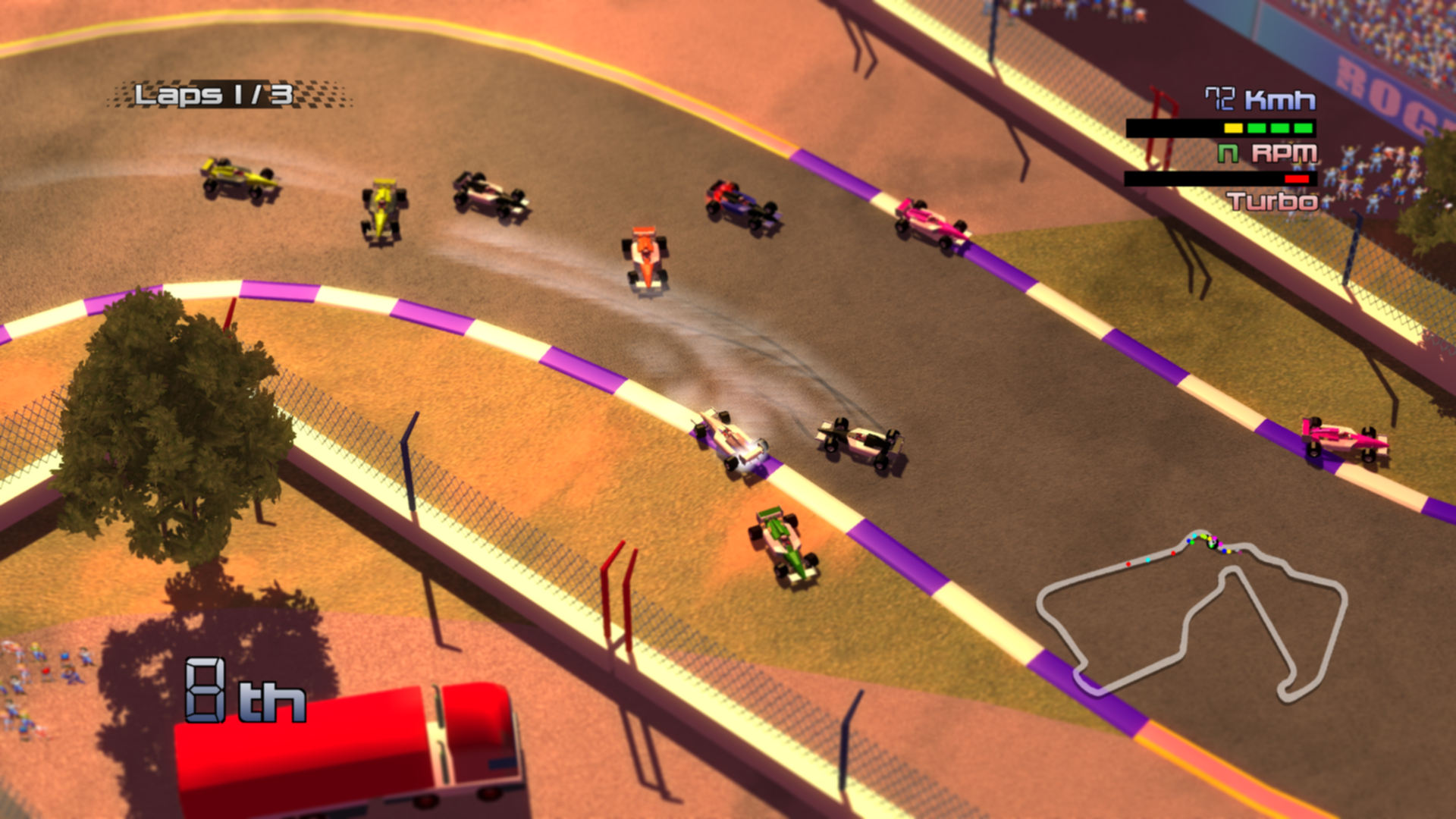 Grand Prix Rock ‘N Racing has a progressive element by rewarding you with tokens to improve your car, there’s no quick way of improving your car so you better get used to finishing at the lower end of the grid. There is an issue with the physics though. It’s understandable at the beginning that your car will have less responsive tyres or brakes that take an age to engage but as you improve these features you seem to be punished with some unrealistic or predictable controls. You’ll improve the quality of your tyres to a certain level but in the race instead of your car taking a corner more efficiently your vehicle will suddenly overcompensate and turn too quickly almost turning into a 360 which obviously slows you down considerably. Your turbo is useless at the beginning whilst you’ll really have to invest in your brakes early on to give you any chance of finishing above last in most of your races. Not sure where the rock in Grand Prix Rock ‘N Racing comes from because whilst the backing tracks are reasonably rock sounding there isn’t anything else rock-esque about Grand Prix Rock ‘N Racing.

The announcer is awfully repetitive, repeating the same phrases no matter what is happening on-screen. When you finish a race, you have to wait for the other cars to finish before you can move on unless a long period of time passes and race just finishes, that’s just frustrating especially when you have to listen to the announcer telling the other racers to hurry up. 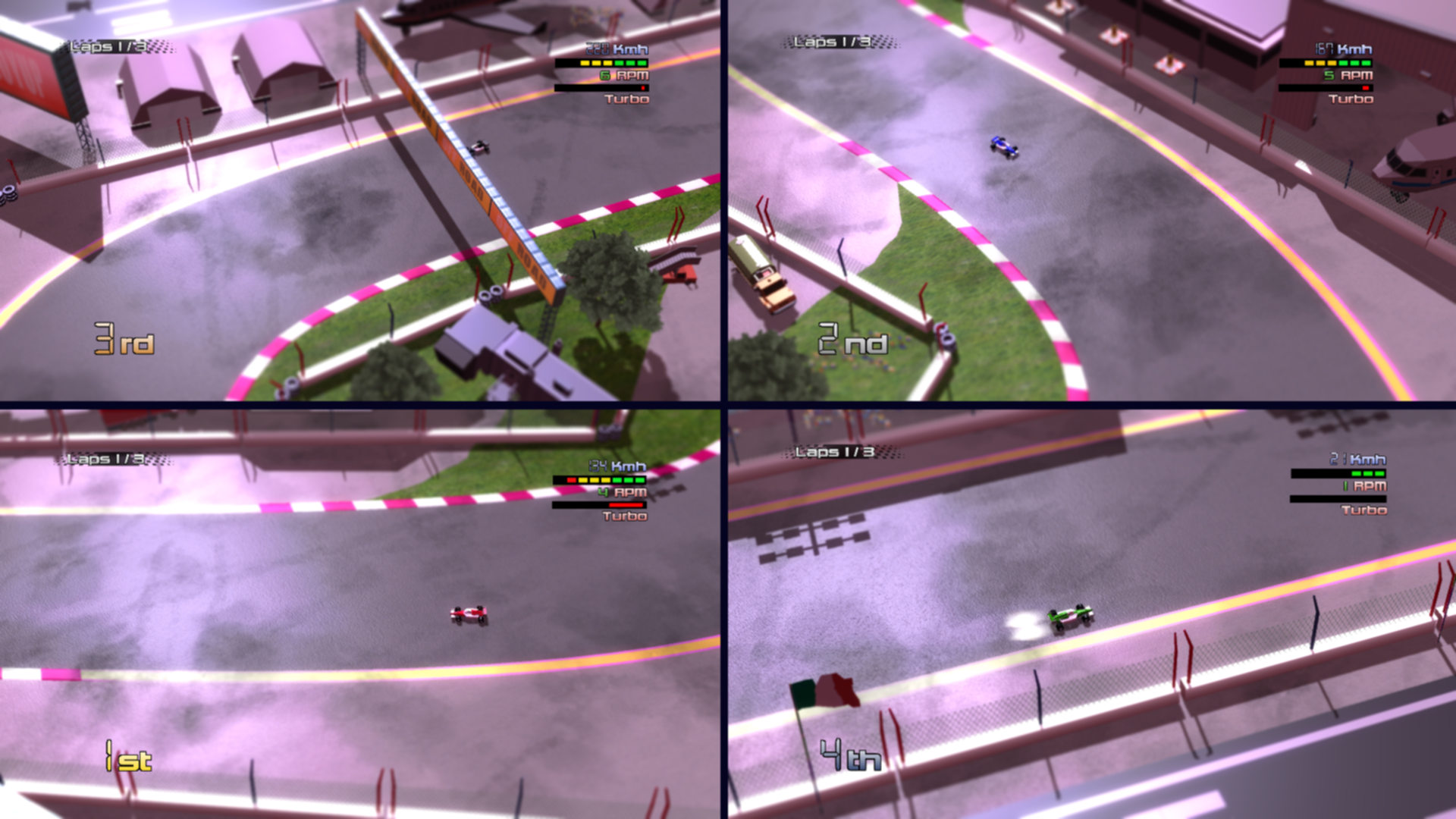 Graphically Grand Prix Rock ‘N Racing is pretty basis whilst the tracks may look different but they all feel the same. The other cars race really aggressively and will often bump into you especially at the start of a race, in some cases a bump may only move you slightly but in other cases it can stop you in your tracks and there’s not much you can do until you become stationary. You can do it back but it’s not worth it as more often or not you’ll end up ruining your own chances.