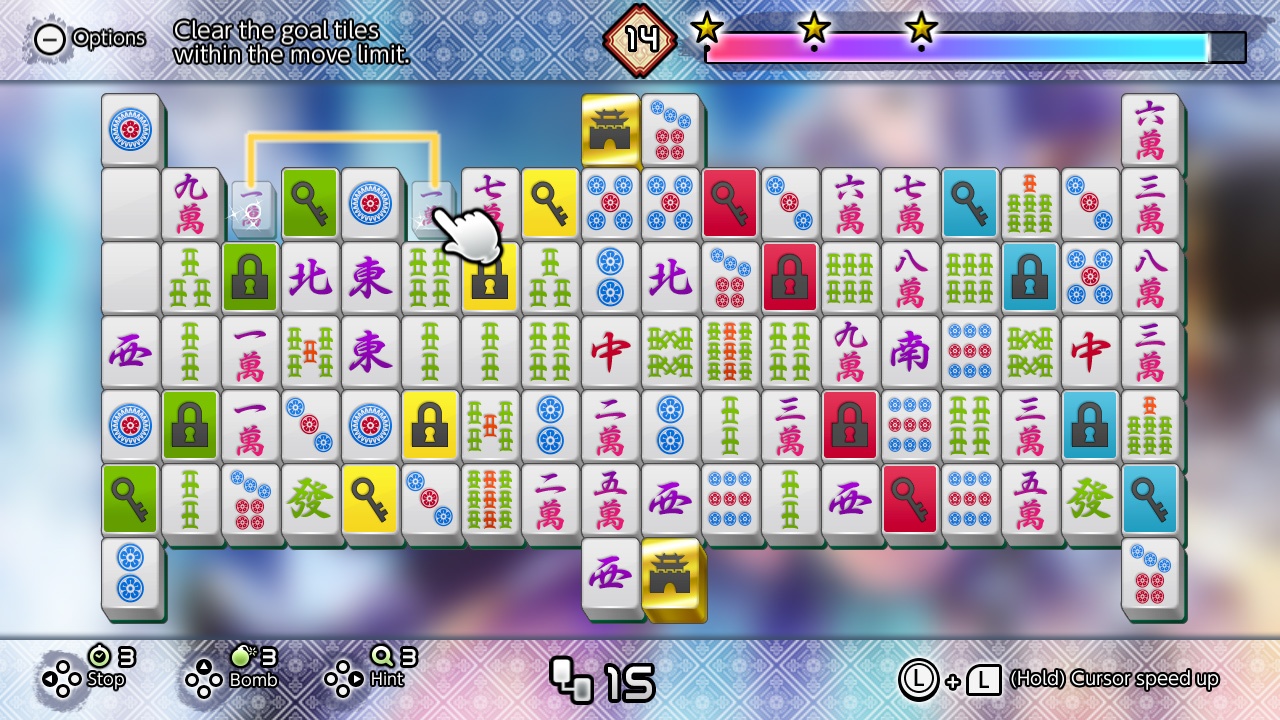 Enchanting Mahjong Match is match-em-up style game that is based on, yes you’ve guessed it, the ancient Chinese game of Mahjong. However, this new version of the connecting game classic, developed by Orgesta and published by D3 Publisher, contains a few twists that further enhance the gameplay of this timeless game and is out now on the Nintendo Switch.

This tile-based game follows a simple premise, in which you must match up pairs in order to remove the tiles from the board. However, it’s not as simple as it seems. There are certain rules that must be adhered to in selecting which of the tiles you can pair up. Firstly, you can clear tiles that match and are adjacent to each other, either vertically, horizontally or diagonally. Secondly, any pairs that can be connected via a straight line can be matched and thirdly, those which can be connected with a line containing no more than two turns, or ninety degree angles, along its trajectory. Each of the small tiles are decorated with Chinese symbols and lettering, some of which look very similar, but not always identical.

So, what is it that makes this version of the game so different from the classic gameplay of the original? Well, firstly, Enchanting Mahjong Match contains several new tiles to add a variation to its themes. These range from Item tiles which replenish items at random, more on that in a moment though; Lock and Key tiles which work on the premise of matching two key tiles which then unlocks the locked varieties; Numbered Tiles which must be paired together in ascending order; Blocked Tiles which cannot be removed and finally, Hidden Tiles which need to tapped to reveal whatever symbols they contain. Along with the classic tiles normally associated with the game, these new elements bring a completely different experience to what you may expect. 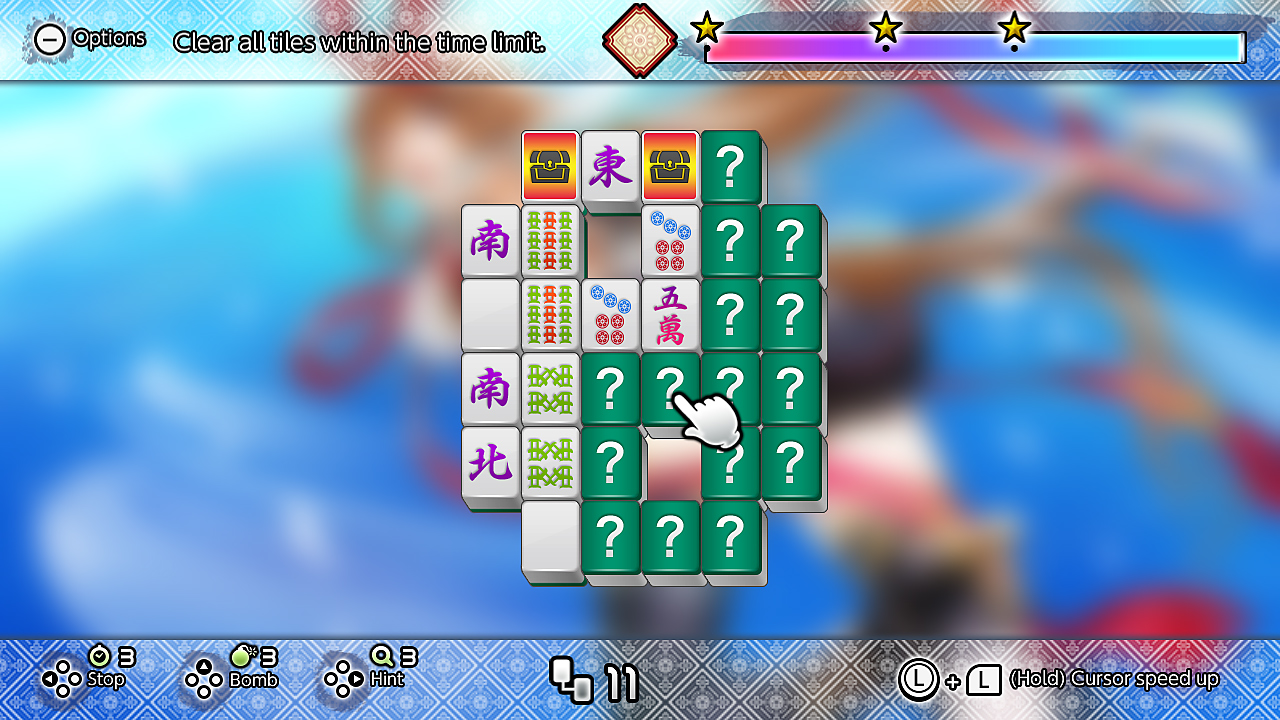 As well as the inclusion of extra tiles, Mahjong Match also brings a couple of gameplay variations to the board. These come on the form of clearing all the tiles within a set time or move limit. Achieving these conditions awards you with stars, up to total of three, depending on how well you perform with each puzzle. These stars contribute to, not only the unlocking of later levels but also, the removal of several tiles from a series of twenty-eight enchanting, whence the title, anime pictures of various waifu girls in provocative poses. It should be noted that this game is rated twelve, or teen, due to the inclusion of these images. These pictures of scantily-clad, and bodily enhanced, girls do add an element to playing the game through, although I would suspect that this would be dependent on your own gender; something that seems to be a trend lately with other games such as the upcoming Gal-Gun and The Men of Yoshiwara.

The game of Mahjong had always been a relaxing affair during my past experiences with the game. However, with the inclusion of timed levels in this version, Mahjong Match is the complete opposite of this ethos; bringing with it a level of difficulty and tension that is very challenging indeed. This becomes further ramped the more you progress within the game and the more you level up. The speed of the timer-incorporated levels are very unforgiving, especially if you want to achieve the three-star rating, and certainly require a good skill of hand and eye co-ordination. The levels of set moves, however, are a far more relaxing experience and a nice break from the urgency of being timed. These levels introduce a new type of brick into the gameplay which need to be paired to complete the level. These ‘Goal Tiles’ need to be paired within a set number of moves by clearing the tiles that surround them, thus freeing them up to be paired.

Whether the level is timed or move restricted, each puzzle sets up a challenging board upon which to play. Once you run out of moves or the timer fully depletes, then it’s game over. However, each of the levels can be instantly replayed and, although the same rules will apply to each game, the order of the tiles randomly changes with each playthrough. This is a nice inclusion into the mechanics of the gameplay as it, not only stops the staleness of learning repeating patterns but, adds to the longevity of the title. Saying that though, once all of the enchanting pictures have been fully uncovered, there may be some players who have nothing else to return to. To help with the difficulty of some of the levels, the game also allows the use of some items, as previously mentioned, that can help you to achieve a three star rating and clear the board. These include the ability to stop the timer for a short period of time, Bombs which will clear two pairs of tiles and Hints which highlight clearable tiles. You start off with a maximum of three of each item and once used, by pressing the corresponding button on the D-Pad, can be replenished one at a time by matching up the aforementioned, Item Tiles. These really do help in achieving success and require several playthroughs of previously completed levels to refill them. However, with the nature of randomly generated tiles in each level, this never becomes stale or repetitive and even helps in beefing out the playing time of the title. 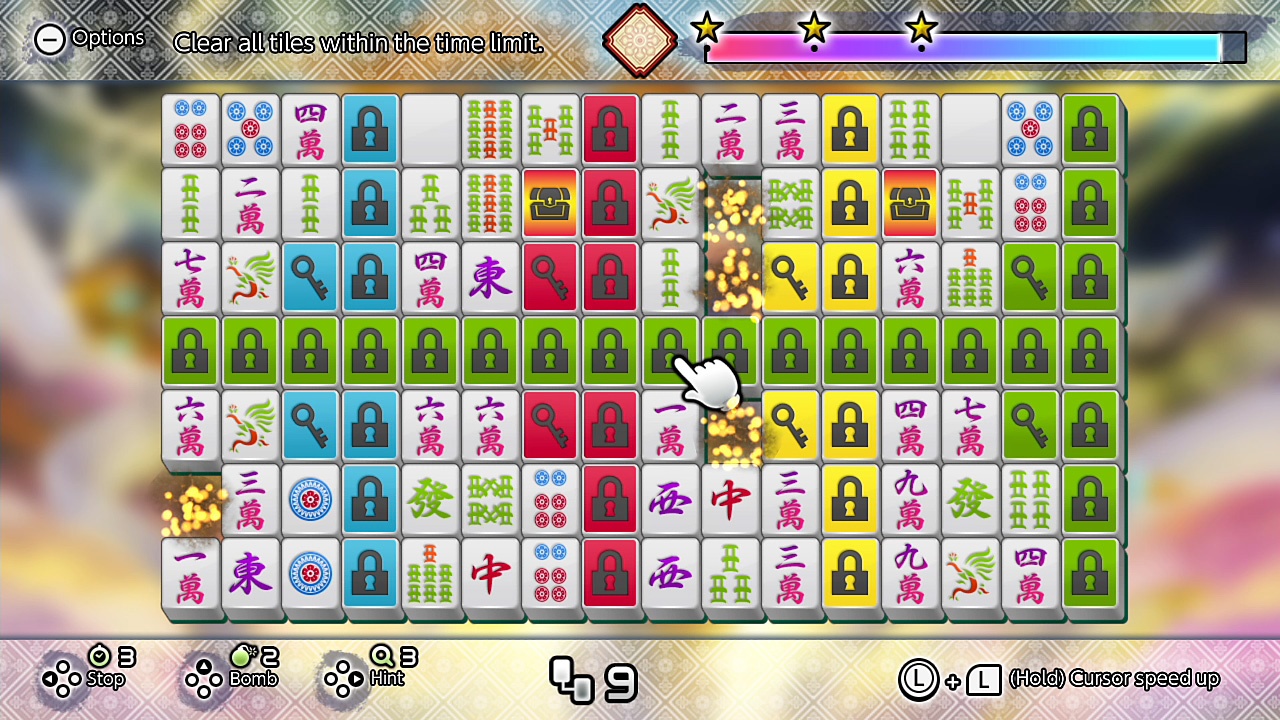 The game can be controlled by using both the classic method or by using the touchscreen. With the use of a cursor, you can select tiles with the left thumb stick and A button in order to match the pairs. However, with a very unforgiving timer, this control scheme becomes largely fiddly and increases the difficulty of the game ten-fold, especially if you are playing for three stars. The touchscreen is much more intuitive here, with instant selection and more speed to your input method. However, with the size of the tiles and the closeness of their proximity to each other, it can sometimes be difficult to achieve a level of accuracy with your selection, especially if you have larger, or fatter, fingers with which to play.

Overall, Enchanting Mahjing Match offers a nice variation to the classic concept of the original Chinese game. With a hundred and forty varying levels and twenty-eight waifu’s to unlock, there is enough content here to keep even the most ardent puzzlers happy. There’s nothing particularly ground-breaking in its presentation, but the graphics are clear and precise with a soothing soundtrack that is pleasant to listen too, with each of the anime art styles also being particularly bright and detailed. The game offers a fair challenge and a lot of fun, and for its pocket-money pricing, also offers a satisfying experience; particularly if you are a fan of playing Mahjong; just be prepared for an intense time rather than a relaxing jaunt.