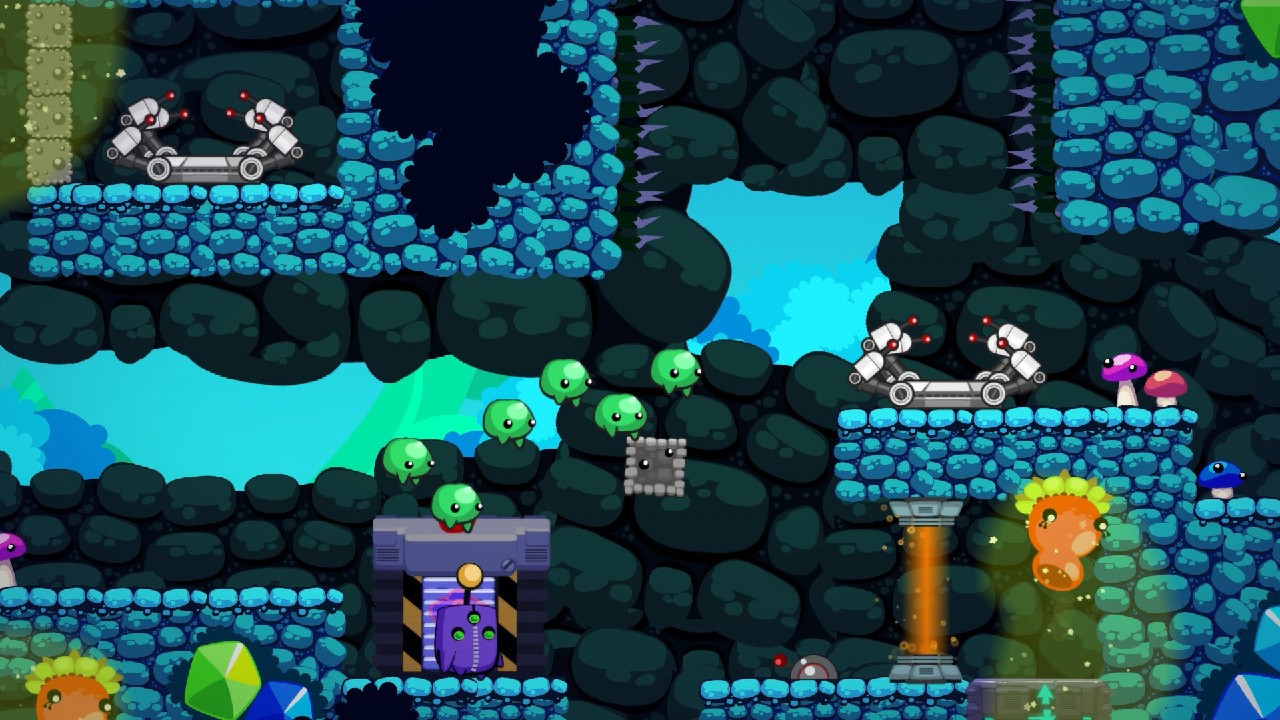 Note: Nick Carroll is a full-time employee of Ubisoft Redstorm, and all of the views and opinions represented in this review are his alone.

So Many Me: Extended Edition follows Filo, a small bean-shaped quadruped, who finds himself with a magic doppelganger that mimics his every move. Filo must find more of his clones, discover their origin, and team up with them to save the world. 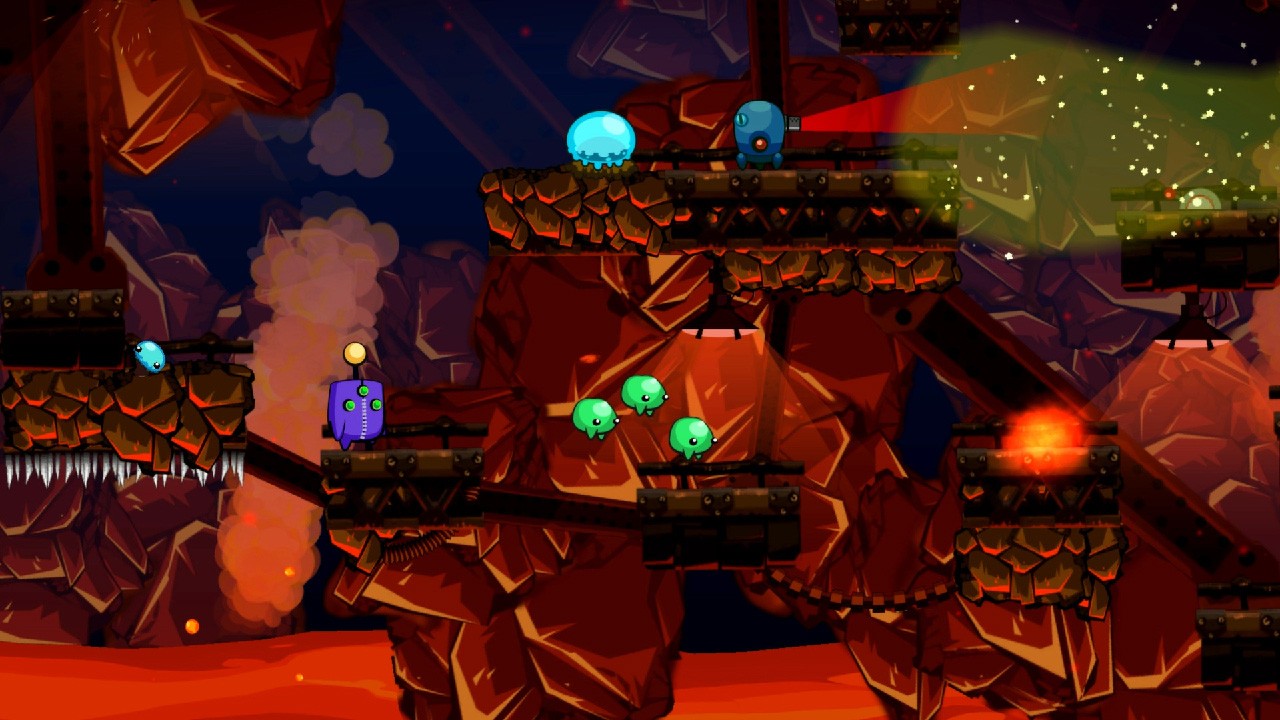 So Many Me: Extended Edition is a Puzzle-Platformer, where the player controls a string of cloned creatures across varied stages, collecting objects while reaching a goal. Each character in the string has the ability to turn into a small platform for the next character in the string to jump on, allowing the player to reach new areas in the level. Once the utility of the platform has been exhausted, the player can recall the platform back to the string of creatures. As the player progresses, more creatures are unlocked, allowing the player to chain together more platforms and recall the platforms in reverse order. As the levels progress, these platforms are not only used for traversal, but also for blocking bullets, hitting switches, and using power-ups. The best levels require the player to maximize both the utility of each block (i.e. blocking bullets and providing a platform for the player) and prioritize the order that each block is placed so that when you recall the blocks, they are recalled in your expected order and they do not interfere with your puzzle’s solution.

Later levels offer power-ups, such as trampolines and balloons, which make the next blocked spawned have special properties. These power-ups, combined with maximizing the utility of the blocks and spawning the blocks in the correct sequence, creates some amazingly brain-bending puzzles. These puzzles are easily worth the price of admission. However, there are some significant reservations that prevent So Many Me: Extended Edition from reaching its full potential. Multiple times in the game, the player will have figured out the solution for a particular puzzle, but executing the solution to the puzzle was significantly harder. These puzzles exasperated weaknesses in the controls and in the level design, such as fidgety/unpredictable reactions to walking on the created platforms or weak checkpoint placement. These weaknesses are heavily apparent in boss fights, which despite their tedious save points are otherwise clever uses of the mechanics. The player must utilize their platforms to avoid enemy attacks and turn the environment against enemies. 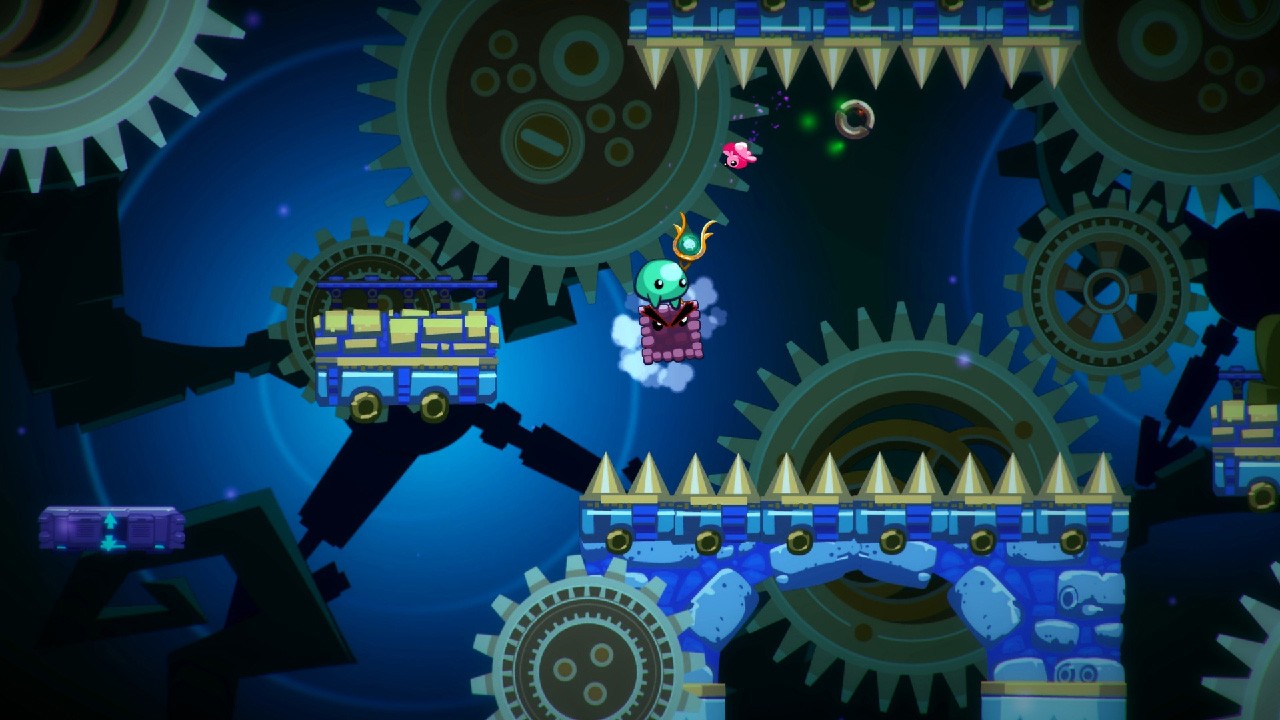 So many me has a simple cartoony art style with a pleasing pastel palette and basic, utilitarian sounds. This is functional, but not nearly as inspired as the puzzle design. The most inspired aspect of the art style is the costume collection, These costumes reference other games, pop culture figures, etc.. and provide a varied and creative wardrobe for your clones. It is surprisingly satisfying and fun to see your chain of identical clones slowly gain unique costumes by completing optional objectives. There is little dialogue and writing in the game, but it is written in a light, goofy, manner, mirroring the cartoony pastel aesthetics. I don’t find the aesthetic direction particularly interesting, but it is certainty tonally consistent and not jarring.

Ultimately, So Many Me: Extended Edition thoroughly impresses with its unique spin on puzzle platforming and level design. Planning out which boxes to place and which to recall forces the player to think unconventionally through the solution before implementing it. Unfortunately, due to some touchy controls and odd save locations, implementing the puzzle’s solution can be a little more tedious than necessary. Despite the (relatively few) touchy times, I loved completing tough puzzles and adding some personality and life to my team by outfitting each of Filo’s clones in varied duds. This fun and thoughtful core loop succeed despite the control and level issues, leading So Many Me to become a solid addition in the switch’s puzzle-platform canon.

So Many Me Extended Edition Review

So Many Me: Extended Edition thoroughly impresses with its unique spin on puzzle-platforming and level design, becoming a solid addition to any library.