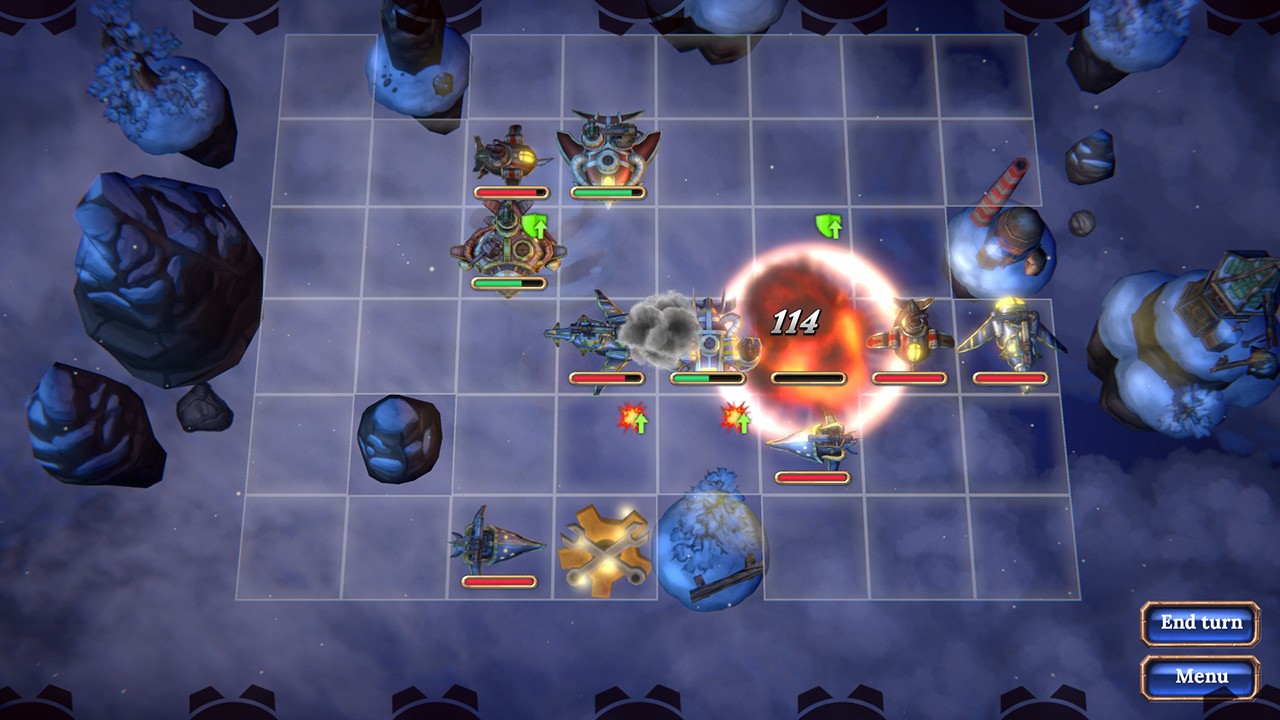 We all know that classic tale where the talking dogs betray one another. Attempting to move one paw closer to ultimate power, no matter the cost. A cleverly spun web of lies and deceit draws the characters closer. One fleeting moment is enough to realise the error of their ways. Why are they fighting one another, when their true enemy is using them as a pawn? An alliance is formed, and a new mission is now the goal. The fate of the kingdom is in their paws, failure is not an option. Igor Rashkuev has published and developed Steam Tactics. A turn-based Steampunk aviation title where you control your band of pilot dogs. They are on an ever changing secret mission for the royalty of the kingdom. You will encounter pirates, police, and inquisitors who are determined to stop you.

The game opens with you in charge of a fleet of 2 ships. You control a mustached frog named William Torgnan, and a cocky young dog called Benedictus Maximus. The opening levels take place between the pair and a pirate named Selva Thistlethorn. These act as a tutorial and ease you into the action. Though, it doesn’t explain all the finer details that you need to know for the latter stages. Self exploration and trail and error help you understand the intricate areas of the game. You see that each of your ships has its own set of stats, as does each pilot, and the weapons you use. Mixing and matching and deciding what works best is a fine art, and a difficult balancing act. After hours of playing, I never got the hang of it, and well, I decided the best option was to wing it and hope. Mostly it was a success, but there were several frustrating moments and repeated failings.

The story of the game evolves over 2 chapters, each with many levels. The map which you must traverse is marked out with pinpoints to show each stage. You must follow the action in a linear manner, though you are free to replay any level. This enables you to gain extra resources and XP for each of the pilots. The levels have a difficulty grading from 1 to 3 stars. Preparation and a full understanding of the game mechanics is required if you are to succeed. I flew through the early levels, not paying attention to any of the finer details. I even messaged a friend saying how easy it was, I definitely had spoken too soon. Steam Tactics goes from child’s play to teeth crunching difficulty in a matter of seconds. I was glad the ability to replay levels was available as I ground out the early stages. I needed all the resources I could muster, but somehow they were never enough. Planning and an awful lot of luck is what you need once the difficulty ramps up.

Your miniscule fleet of 2 soon expands to 3, and then 4. The early levels now feel like a walk in the park, but the latter stages need a methodical approach. Your ships have defensive qualities, a weight allowance, and set moves. You must know the oppositions weapons, and your resistance to them. On the flip side, you must also know their stats, and how effective your firepower will be. How you level up your pilots gives a bonus to certain weapons and adds defence and HP. Weapons are split into categories; projectiles, missiles, fire, acid, and machine guns. They all have unlimited ammo, but each can only be used once in a turn, and the enemy must be positioned correctly. They are further split into; close, medium and long range. If you fire upon an enemy, and they have a gun that uses that range, they can fire back. Be aware that sometimes attack isn’t the best form of defence. 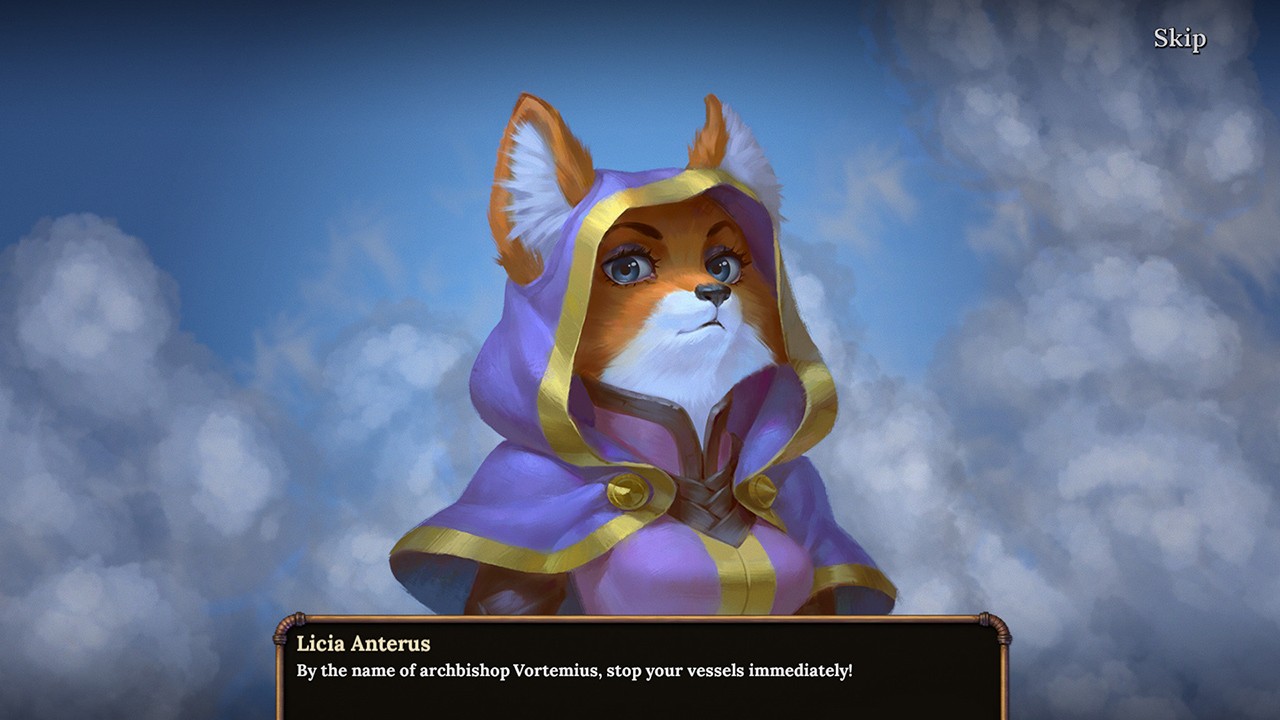 The game has a small amount of consumables that can buy items at the merchants, and upgrade equipment. You will unlock a workshop and a lab during the first chapter. This allows you to increase the power of any weapon, and the stats of any vehicle you are using. A grading of 1 to 3 stars is also used for the equipment. Upgrading alone won’t increase the star level of either your ships, or your guns. Nope, you have to use your lab. I really liked this game mechanic, as it prevented you from being overpowered in the early stages. The lab works like this; You pick any item, you then have to have an identical item with the same level attached. You then pay your money and receive a much more powerful weapon in return. But you now only have one instead of 2, which reduces your firing capabilities. The beauty of this is that you can grind out resources all you want. But, if you don’t have that second weapon, it’ll always fall short. It’s all about balancing the progression with each of the levels needs.

You now understand that Steam Tactics is about planning, grinding, and upgrading. But what about the most important aspect? It’s time to talk about the battles. First, there is no timescale. Victory occurs when the opposition is destroyed. Each of the maps has natural obstacles that force you to move around them, but they don’t act as a defence. This surprised me, as most strategy games want you to use the environment to your advantage. Yet the developers overlooked this, making it an inconvenience rather than a feature. In the early stages, you only concentrate on your positioning to fire your weapons. But, as you progress, there are boost tiles for both attack and defence. These are useful, though the AI is intelligent enough to stay out of range. So planning your attack around these boosts will never win you the war. You will also see repair kits, and gold chests appear on each map. These only appear for a short period, and the repair kit is available for friend and foe. They can be a game changer and losing one to the enemy can turn the tide of battle in their favour.

I enjoyed the battle mechanism a lot, though it wasn’t always clear how the damage was calculated. I would acknowledge my opponent’s resistance and check the strength of my weapon. I’d shoot, get 100 damage, and think not bad! I’d choose another ship, repeat the process, hit it with a “better” gun, and yet the damage was 20. I must have missed something, and I wish I knew what it was, as it would make planning so much easier. Other than this oddity, it was one of the easier strategy games to pick up and play.

A lot of the elements within this title are very good, but one that isn’t up there is the graphics. Now, they’re not terrible, but they are about what I’d expect from a mid range indie title. It felt as if it wouldn’t be out of place on the Xbox 360. This isn’t a complaint, it’s more of an observation, as the presentation is adequate. Playing out in a tabletop perspective, all the action takes place on a fixed screen. You can check the limitation of your ships for movement and firing capabilities. You are also allowed to check out your opposition before you make any moves. This transparency made planning very easy, and you were never in doubt about what you could do on each turn. There is no audio narrative and all the dialogue is portrayed using text. Each character image lacks animation, giving this a distinctly retro feel. I would have liked the images to have been more striking. It all had a fuzzy soft edge to it, a bold jRPG style would have worked well. 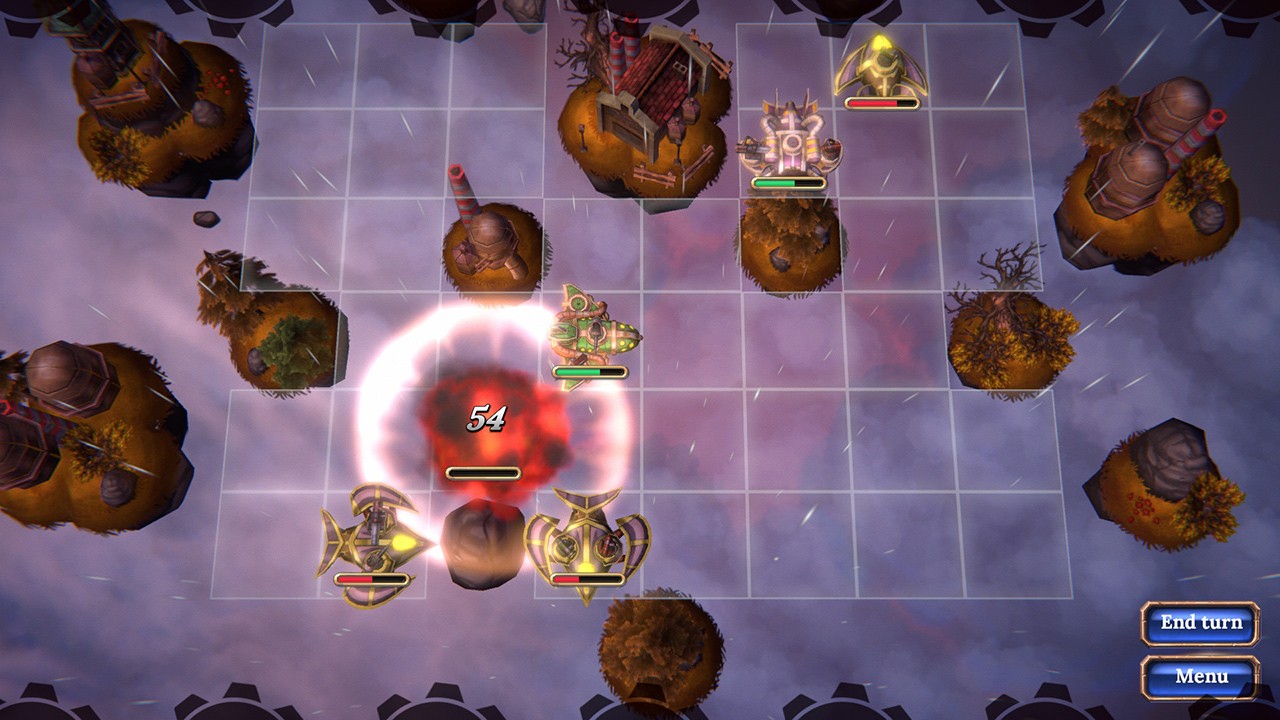 Igor Rashkuev has taken a simple approach with the audio. Classic sound effects have been used to highlight the brutal force of the ships in each mission. This has been matched up with a mixture of calm and serene music for the few lulls in the action. A high tempo and upbeat tune play out as the ships blast each other out the skies. And sinister music accompanies the times when the true opposition makes an appearance. I liked the audio in this game, even though I wasn’t always aware that it existed. This isn’t a bad thing, it means that it isn’t overpowering the action.

A busy UI and several menu’s made this straightforward to play. The battle section was easy to understand and moving around is shown with a blue hue. Shooting is as simple as pressing a button, as is selecting which mission you want to try. My problem lay with moving through the submenus. There are 4 options available on the main screen, then you have 1 for the upgrades, and 1 or the lab. I pressed the wrong buttons to exit and enter the menu’s every time I played. It’s not a big thing, but it should be easier. The developer should have used the same button to back out of each option. As I say, it’s only a minor thing which doesn’t impact gameplay at all.

Most strategy games have a fair amount of replay value, but Steam Tactics have excelled here. Every level has 3 difficulties. All equipment maxes out at 3 stars. The 2 chapters are bursting with stages, so there is a lot to keep you playing. You may be worried that repeating the same levels over and over again will get boring. It doesn’t, as you think of a new plan for each attempt. All the achievements are earned through natural progression, and some grinding. None of them are hard to unlock, and I’d say you’d be looking at between 8 and 10 hours for a full completion.

This is a dark tale of deception and revenge, all wrapped up in a fur coat. Several factors must be taken into account if you wish to complete your mission. Take your time, improve your pilots, and your fleet, and you will destroy anything in your path. After hours of playing, do I recommend that you buy a copy? Yes, I do. It’s fun, addictive, and it will test your ability to make a plan. It’s time to put together your fleet of dogs and take on whatever the world throws at you.

Lies and deceit are the glue that holds this story together. Expand your fleet, and take on the true enemy in this dog influenced turn-based strategy game.