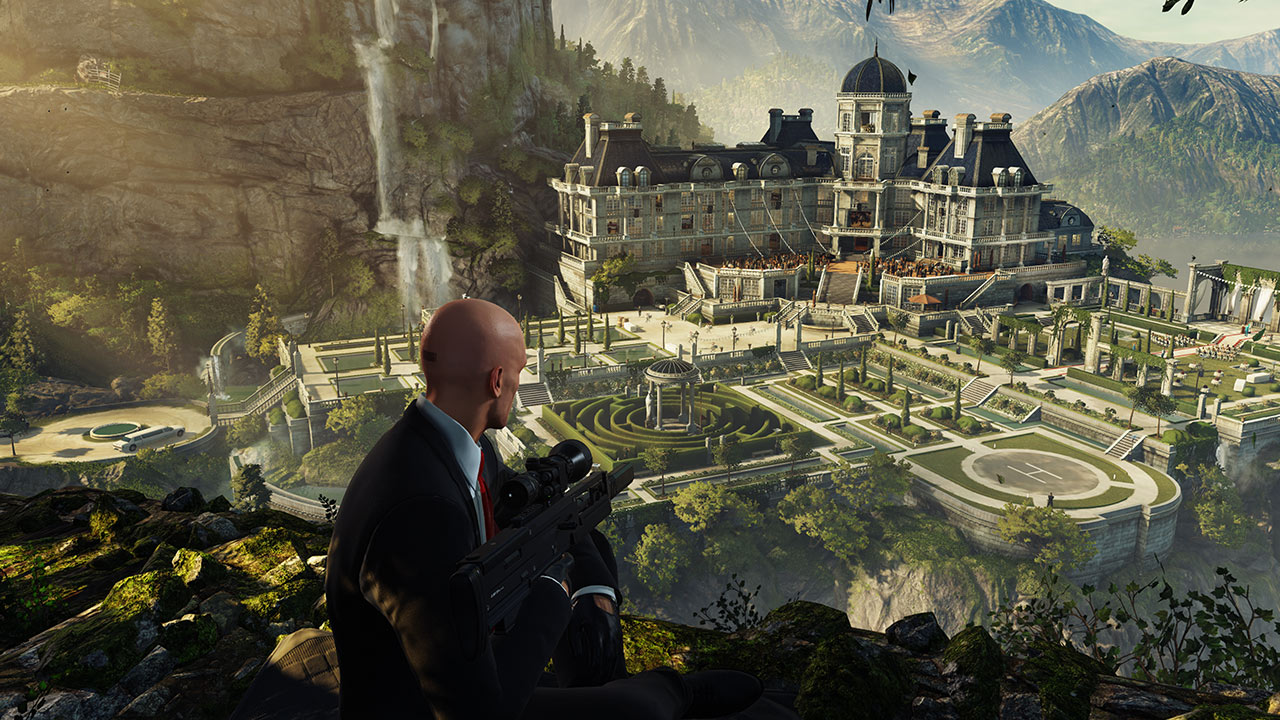 I know the Hitman series is objectively very good, but for one reason or another, it’s not one that has ever truly grabbed me. I have tried a few of them down the years, but I’ve never played one for more than an hour or two – it’s never been an issue of quality your understand, so much as my own complete lack of patience. While my interest in the upcoming Hitman 2,the latest game in IO Interactive’s long running assassination-based series, remains somewhat muted by said lack of patience, my interest has certainly been piqued by the free Hitman 2: Sniper Assassin, (well, free if you pre-order November’s full, Hitman 2 that is).

While I’m not particularly keen on this type of pre-order bonus, the type that locks an experience away from all the but the most ardent of Hitman fans (I’d happy pay a few quid for this enjoyable mini-game), I can’t help but be rather enamoured with the bite-size sniper-fuelled mayhem on offer here. Perhaps I enjoyed it so much because it’s a stripped down version of the full game, which is actually a bit of a shame as, while it’s all good and well preaching to the choir, by locking this behind a pre-order bonus scheme, they are essentially keeping it away from the kind of casual fans that could have been won over by this simplified but hugely enjoyable introduction to the world of Hitman. 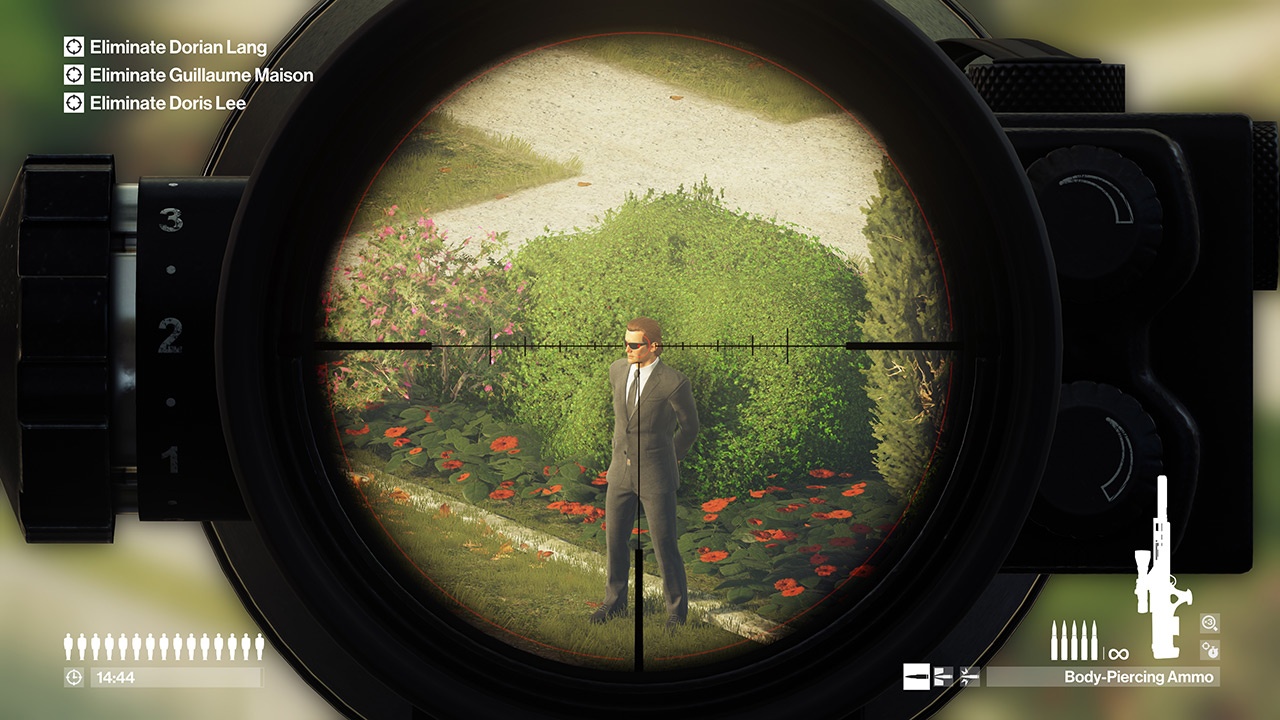 Issues with distribution aside though, when judged on its own merits, this brief but highly polished sniper-based mini-game is tons of fun. It’s only likely to last you an hour or two and replayability is undoubtedly limited, but thanks to its top-notch sniping mechanics, sizeable location and genuinely gorgeous visuals, Hitman 2: Sniper Assassin really is amongst the finest sniper games I have played.

From your fixed location up in the hills as Agent 47 (or assassins Stone and knight when playing co-op), you are left with the (relatively) straightforward task of taking out 3 primary targets. Problem is, if you go in all guns blazing, the surrounding guests will understandably go bananas and your primary targets will rather quickly do one. Sure, it’s kind of fun, but it’s, well, it’s not very Agent 47 is it. Besides, meticulously taking down guards as you make your way towards your core targets proves a hugely enjoyable experience. 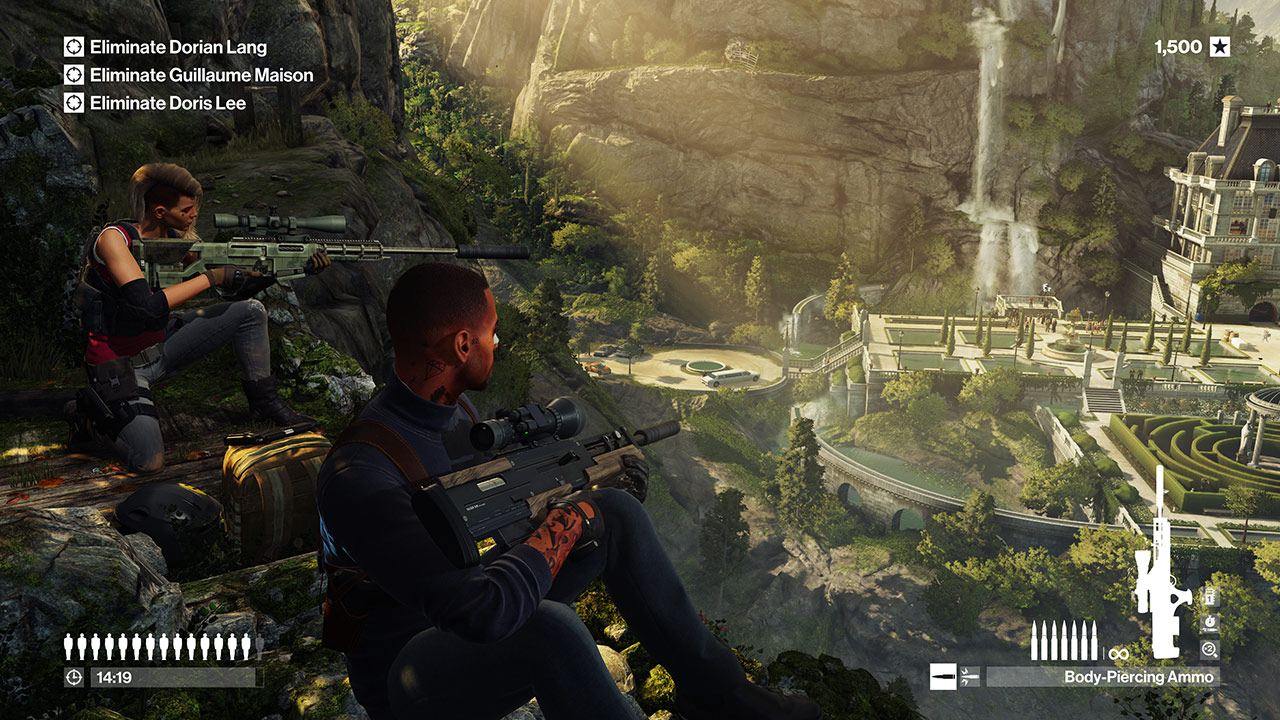 It’s especially enjoyable in co-op mode where you can line-up carefully planned shots with a friend as you take down the guards dotted around the gorgeously idyllic wedding venue. Again, nothing here is revelatory, and content wise, this is rather bare-bones stuff, but for as log as it lasts, those slick mechanics and top-notch visuals really do make all the difference –it’s kind of like an arcade sniper experience with the added bonus of triple-A presentation. Yes, your imagination is serving you well – it’s as awesome as that sounds.

The limited content and the disappointment of the game being released exclusively as a pre-order bonus are both major issues, but if you can look past these problems and judge Hitman 2: Sniper Assassin purely on the strength of the experience, then yeah, you’re likely to have a lot of fun here. The visuals are tremendous, the sniping action, while limited, is incredibly slick and the co-op is huge amounts of fun. It’s just a shame that, by locking the experience away, IO Interactive are missing out on the opportunity to win over gamers such as myself. This really is a perfect introduction to the series, one that is sadly aimed squarely at the hardcore.