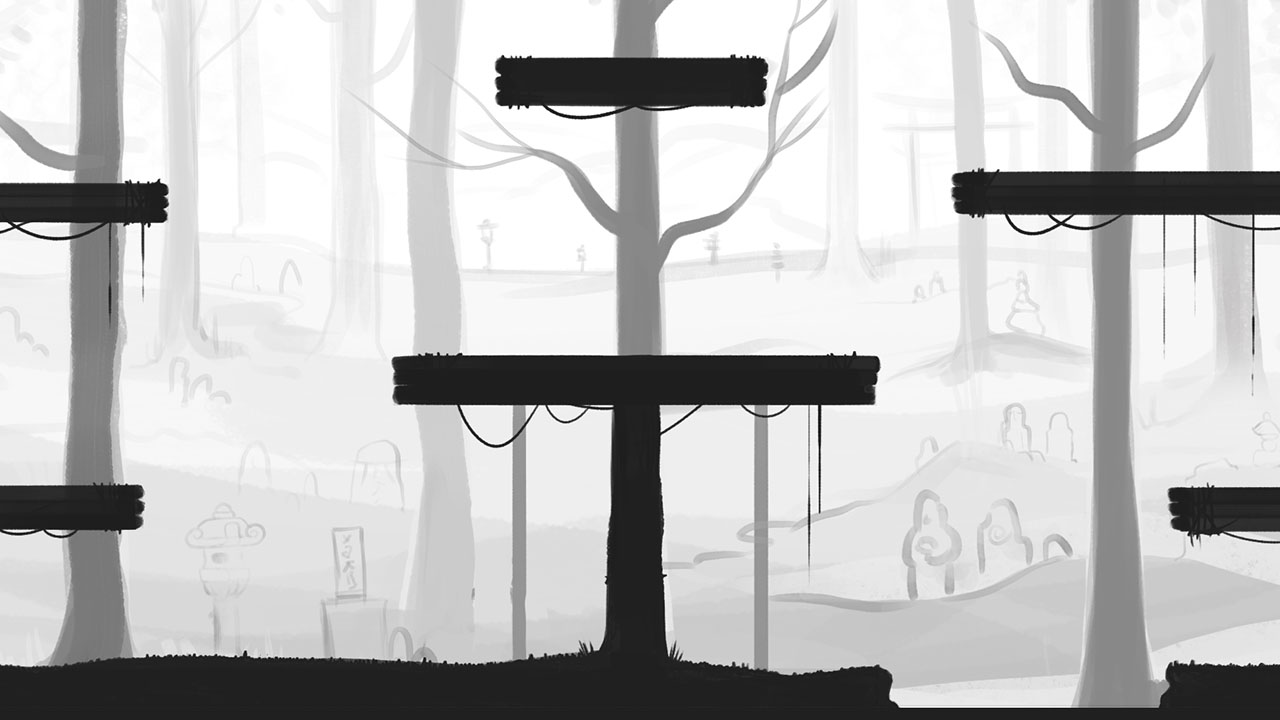 Sometimes there’s a game or premise that’s just so straightforward and simple you have to believe that you’re missing something. “No, that can’t be it!” you say, as you rewind Super Mario Bros. the Movie for the eightieth time to try to figure out what you clearly glossed over. But no, there are things out there that are so dirt simple, deadpan obvious or, in that case of that cursed John Leguizamo vehicle, completely disjointed. Black and White Bushido certainly isn’t a broken game by any stretch of the imagination, but what you see is what you get, and, to be honest, you don’t see much.

Black and White Bushido is a one to four player party arena game, and I heavily, strongly recommend having at least two other people to play with. You either take the role of the light or dark samurai clan, and you are competing against the other team in one of two modes: deathmatch or flag capture. There’s also a training mode for single player only, but, truthfully, it’s a boring, slogging nightmare to do, because this game is tailor-made for multiple players. Anyways, you either have deathmatch, where you kill each other to a certain counter, or flag capture, where you take the flag and…kill each other to a certain counter. It’s one hit kills in terms of sword swinging, with the chance to parry a blow if you both press the button at the same time. Additionally, there are various items that can damage or maybe kill your opponent, though I advise against relying on those too much: only the shuriken really ever served me well. 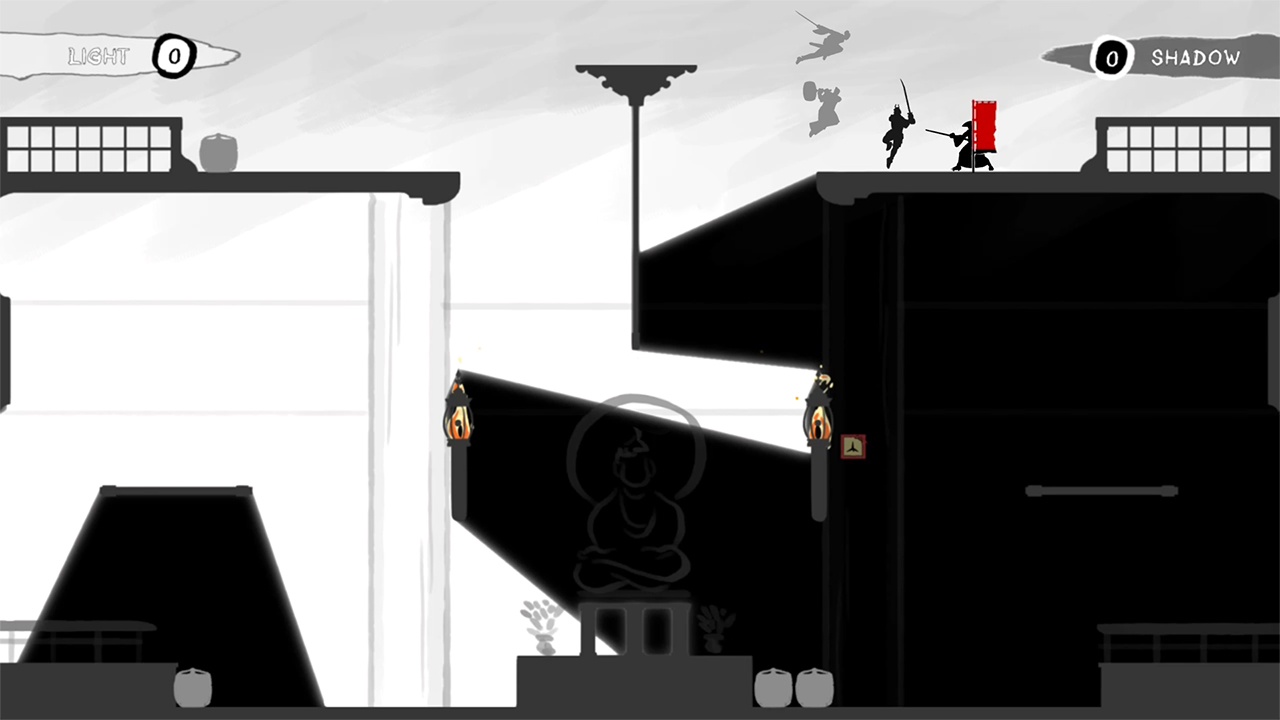 The main draw of this game is the dark and light dynamic that plays heavily into all aspects of the game. The stages (of which there are several, to be fair) are equally decked out on light and dark sections that change and shift over time. Sometimes they’ll swap randomly, sometimes, like in flag capture, there’ll be a greater number of your team’s colors if you’re the flag controller. Anyways, it’s all about polarity: if you’re a light team member and you’re standing in white spots, you’ll basically turn invisible the second you stop moving. Inversely, if you’re in the black zones, you stand out like a sore thumb that desperately wants to be hit with a katana. When you’re in the right zones, you also have the options to creep (so that your outline is more subdued BUT you move slower) or taunt (reveal yourself to try to provoke an attack).

I do applaud Good Catch Games for doing their game some service and designing some really great levels and character avatars. There’s a nice variety in dark and light players, from the overly armored shogun to the unassuming woman who’ll definitely murder you to your face, not your back. Additionally, I like the levels a lot, as they each bring a little something extra in terms of strategy and approach. The shipyard gives some interesting nooks to nestle in and try your luck in drawing first, the waterfall seems to favor light more than dark (just because it felt easier to sneak there with the cascading water at the bottom) and the unlockable level, Hell, is just darkly fun to play. There are moments when I really catch myself loving the detailed, simply setup world and think about how it could be if there was just a bit more to it, maybe an extra mode or a real single player mode or campaign.

However, those two things simply don’t exist. You have deathmatch and flag capture, and flag capture is just a deathmatch with extra steps. If you have no one to play with, Black and White Bushido is a massive waste of money. With zero exaggeration, you’d get more enjoyment from Slice, Dice and Rice if you’re going at it alone, and you’d pay about the same price. It’s cool and interesting from an outside perspective, but does not work, outside of training to get ready for multiplayer, in a single player capacity. 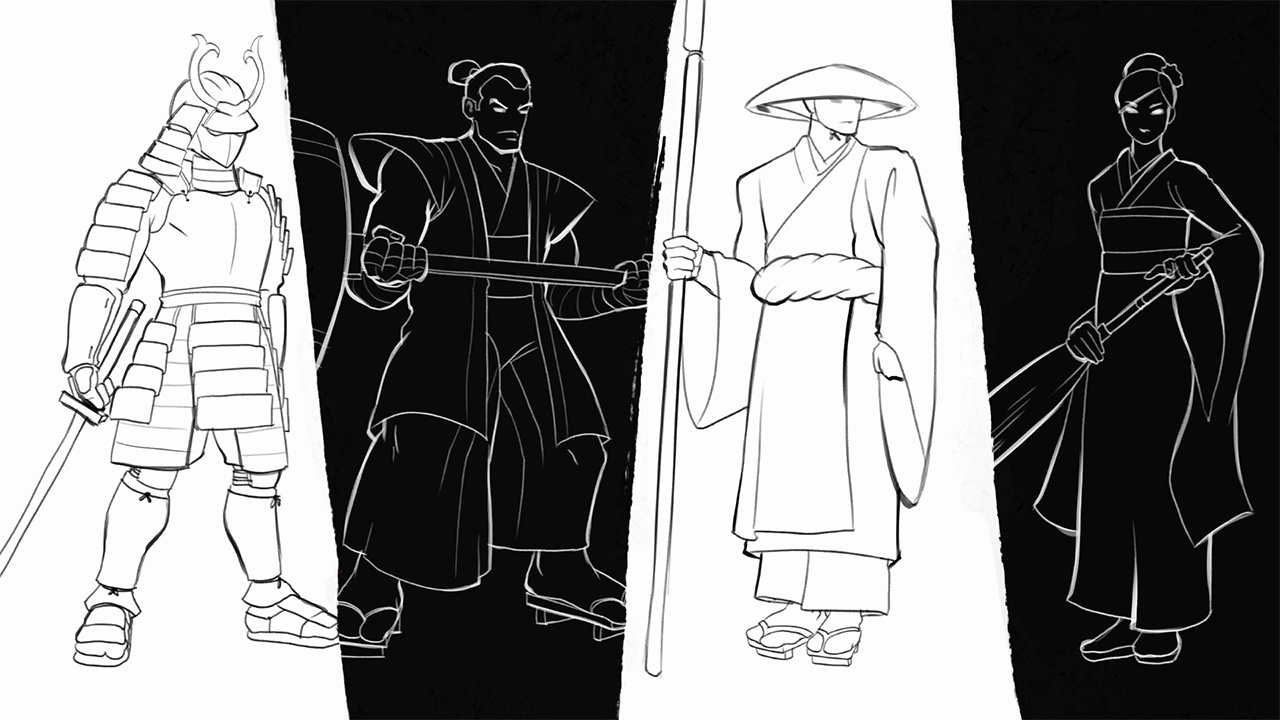 Moreover, when you get into the multiplayer game, there are moments that feel very limiting. For example, you’ll realize that whoever makes the first move is going to be the one to die. That’s because Black and White Bushido is a game of patience: with one hit kills and a zoomed out perspective on the game, you only have to wait to see who ends up in who’s strike zone first. There was one game that I played that just devolved, with 19 kills on both sides and one left to goal, into a five-minute “taunting” match as we both understood that the one who broke first would be the game point. There’s probably more to it when you look at gameplay logistics, and maybe there’d be more tension if I was faster on the trigger, but the fact remains that I snapped, dived in, and got taken to school. High ground, low ground, it doesn’t matter: move and you’re dead.

Additionally, one of the best stages, Hell, needs a staggering 500 kills registered in order to unlock it. Now, there’s a few ways to do this, and one is to play a ton of games and slowly start to hate everything. The other is to set it to the max number of kills for deathmatch, have it set to two players, and have player two go pick up some things from the grocery store. This seems defeatist, but we tried to do it the old-fashioned way (actually playing) and it just got so old so fast. I wanted to see what the level was like before I was sick of it all, and, sure, it’s cool, but I think most people would tire of playing entirely long before they hit five hundred kills. That unlock is definitely a marathon, not a sprint.

As long as we’re all being perfectly clear on the subject, Black and White Bushido is a party game. This is meant for a bunch of people to get together, go two on two or one on three for some cocky host, get some drinks, trash talk, and murder the ever-loving daylights out of each other. That’s it. You’re not going to get this in the pantheon of culturally sensitive or historically accurate games, and you won’t laud the immersive plot or breathtaking graphics. It’s another Switch party game in an ever-growing ocean of multiplayer titles that did “alright” on Steam and the devs/publisher made a hail mary for a console release. If you wanna give it a try, be my guest, but I honestly doubt I’ll play this again.

Sometimes how good a game is or isn’t really can be a black and white matter.