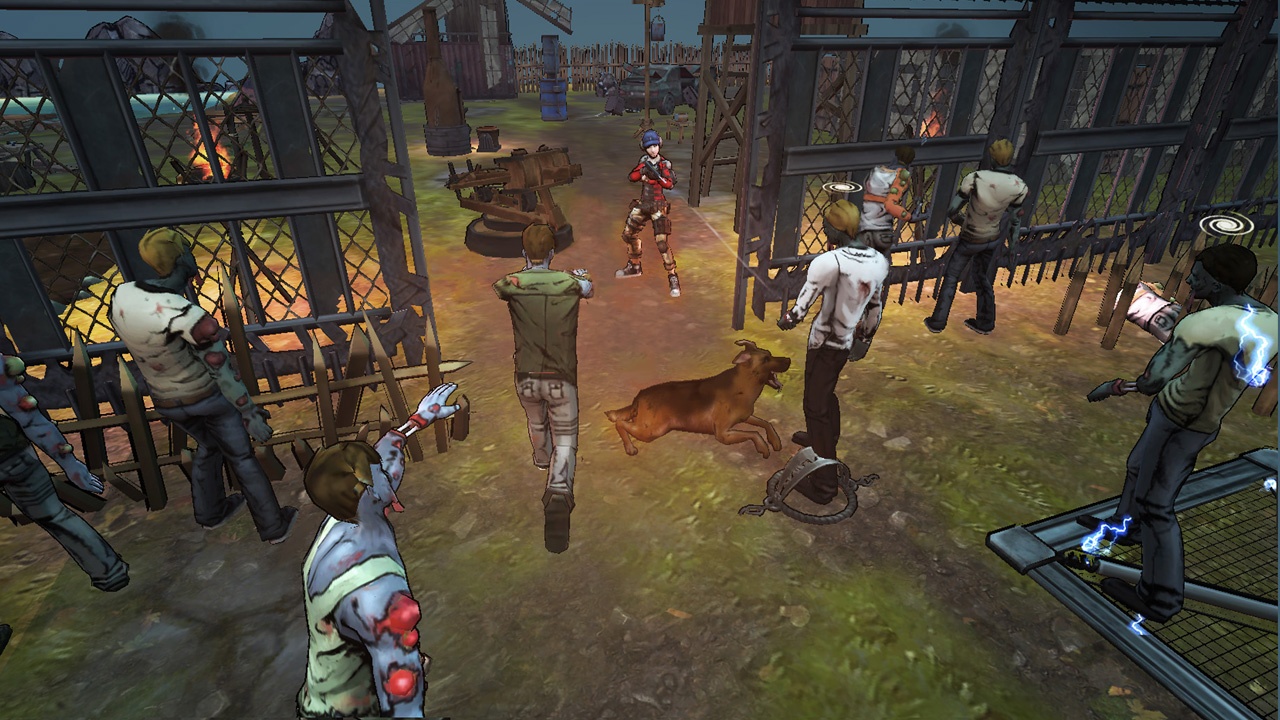 Just when you thought the curse of the zombie game had been laid to rest forever, it rises up from the dead to bring a whole horde of games across all of the major platforms. With recent releases such as World War Z and Blood Waves bringing a resurgence of its kind, the haters of the genre can be left with a distinctly rotten taste in their mouth. However, should you despise the concept of yet another zombie game, then think again, as Wistone Entertainments Dawn of Survivors is now clawing a release onto the Nintendo Switch.

As with the majority of zombie-starring games, the plot retains a certain style of cliché. You begin by choosing your gender from a selection of male or female, as well as naming your character, before you find yourself awakening within a strange facility and discovering that an apocalyptic occurrence has rendered the majority of mankind into the walking dead. Your first task is to escape from your confines, dressed in only your underwear, yes, you read that right and by seeking out a variety of key-cards and weaponry, as well as clothes, you battle against a few of the roaming corpses and eventually, make it out into the big wide world. Once this is achieved, the game opens up into a variety of play-styles and types that adds an impressive amount of depth and content.

The game works on a series of fronts, the first of which is presented in a third-person perspective. This viewpoint largely focuses on combat and exploration when you enter a particular building or facility. However, the next minute, or when outside or within a larger expanse, the game is viewed from an isometric viewpoint that allows for greater exploration as you gather resources and materials that are essential for your survival. It’s here where the core of the game lies, as it plays primarily as a zombie-survival game. There are many elements that you need to be aware of here, from gathering food and water, to collecting materials that you can use to construct all manner of items. 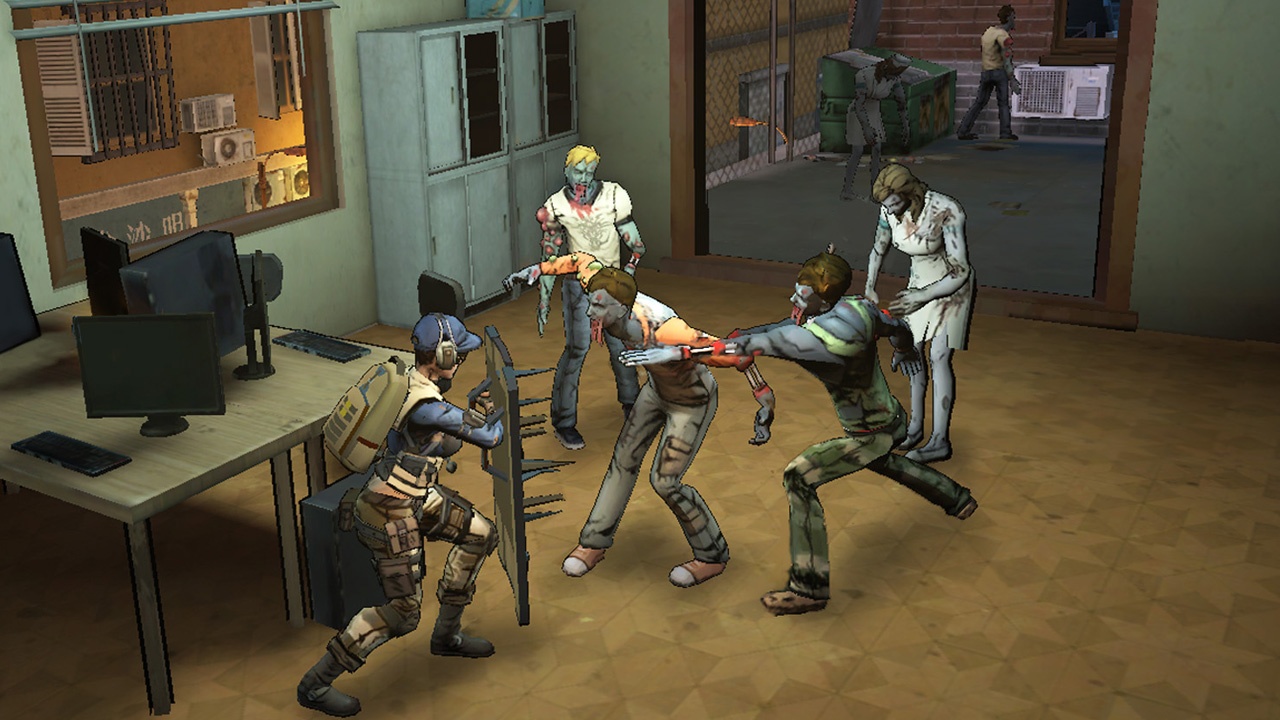 After your initial introduction to the game, escaping from the facility, you come across a dog who, with the aid of a radio attached to its collar, guides you through a tutorial of sorts, as well as outlines the mechanics of the game and sets you upon a series of objectives. You start off by exploring the region immediately around you, discovering resources and locations, as well as fighting off any stray zombies you may come across. Before long you can build yourself a shelter, an array of weaponry and tools before discovering the world map, which opens up a whole new level of the game as it presents a staggering amount of locations, each determined by a level of stars to signify its level of difficulty and distance depending on your means of transport.

As long as you have the resources you can travel to nearby locations. However, building yourself a means of transport, such as a car or motorcycle, opens up further areas and more of the game to you. In terms of general gameplay, or the mechanics that revolve around the game and its survival elements, everything has been executed perfectly. Menus are easily navigated, inventories are quick and easy to use and the crafting can be done on-the-fly. Need a shotgun quickly? As long as you have the required components, you can quickly open a menu and create one for yourself; anytime and anywhere. Should you succumb to the hordes and meet a grisly end, then you can create a new character, find your previous point of death and collect all of your lost resources; essentially carrying on from where you left off. It’s this attention to detail in making the game as accessible as possible that makes it an engaging affair rather than a laborious slog.

However, there are many more elements of the game that, when added together, forms to produce a game that shines in its execution; making this a rather shiny gem of a game within the shadows of a rather overcrowded market. The first of these come with its pricing. At under two pounds, or even dollars, the amount of content, gameplay and replayability available to you makes this game an absolute steal. DO NOT be put off by its price, you’re getting a lot of bang for your bucks with Dawn of Survivors. Secondly, it only weighs in at 370MB, meaning that it can reside in the smallest corner of your memory card and will be guaranteed to stay there for a very long time. How on earth the developers managed to cram in so much content into such a small footprint is beyond me, but believe me, it’s simply staggering. 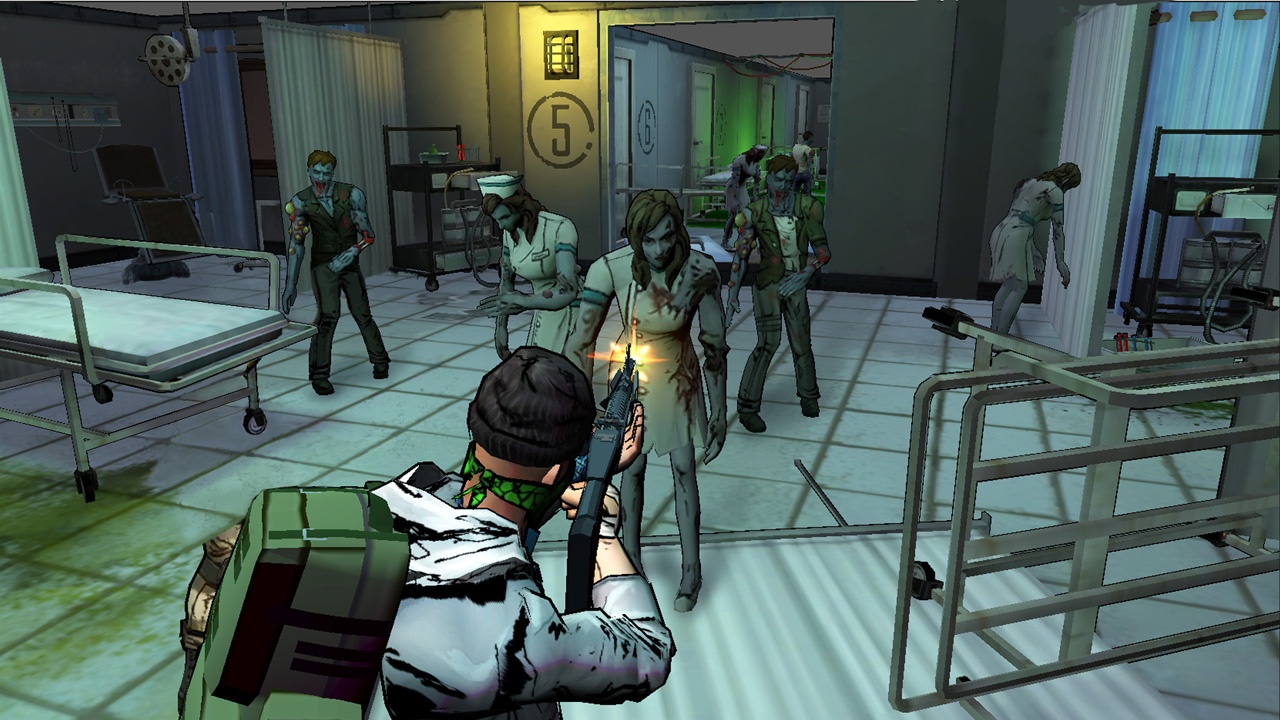 You may be forgiven that thinking this is largely due to a sacrifice in the game’s presentation. However, you couldn’t be further from the truth. Presented in a cel-shaded aesthetic, Dawn of Survivors takes on a very Borderlands-style of artwork which looks simply delicious. It’s biggest feature though, is its online component. In fact, it’s really important to know that this is first and foremost an online game and a Nintendo Online Membership is required to play. However, through your play-time with the game, you will come across other players; some of whom may help you, while others will try and kill you. You can also pillage other players’ shelters, but you also need to be mindful that you may have to defend yours too. It brings another level of depth and uncertainty to the game, adding to the staggering question of how on earth the developers have created such a title that runs at under 400 MB and costs less than your average pick-and-mix.

Despite containing many elements, all of the game’s components have been expertly and perfectly executed. From its various viewpoints, crafting mechanics, skill of survival, combat capabilities and its staggering amount of depth and content, this is a title that just plays superbly and draws you in deeper and deeper. It soon becomes one of those titles that becomes difficult to put down. The more you play, the more you learn and the higher the chances of survival become. Through all of my playtime within the game, I have yet to find any faults, bugs or annoying features within its make-up; making it a very satisfying experience and easily the biggest value for money currently available within the Switch’s eShop.

Overall, Dawn of Survivors provides a perfect showcase of gaming done right. It really is a gem within the rough. With its low price point and small file size, you really do get a game that surprises with its level of depth, wealth of content and pleasing presentation. You simply wonder how the developers have managed such a feat. If you’ve the slightest interest in zombie games, or even titles within the survival and combat genres, then you simply need to own this game. Save your teeth and avoid looking like a zombie by skipping that temptation to buy a pick-and-mix at the local store. Buy this instead. You won’t regret it.

Every once in a while, a game comes along that is simply unmissable. Dawn of Survivors is one of those games.