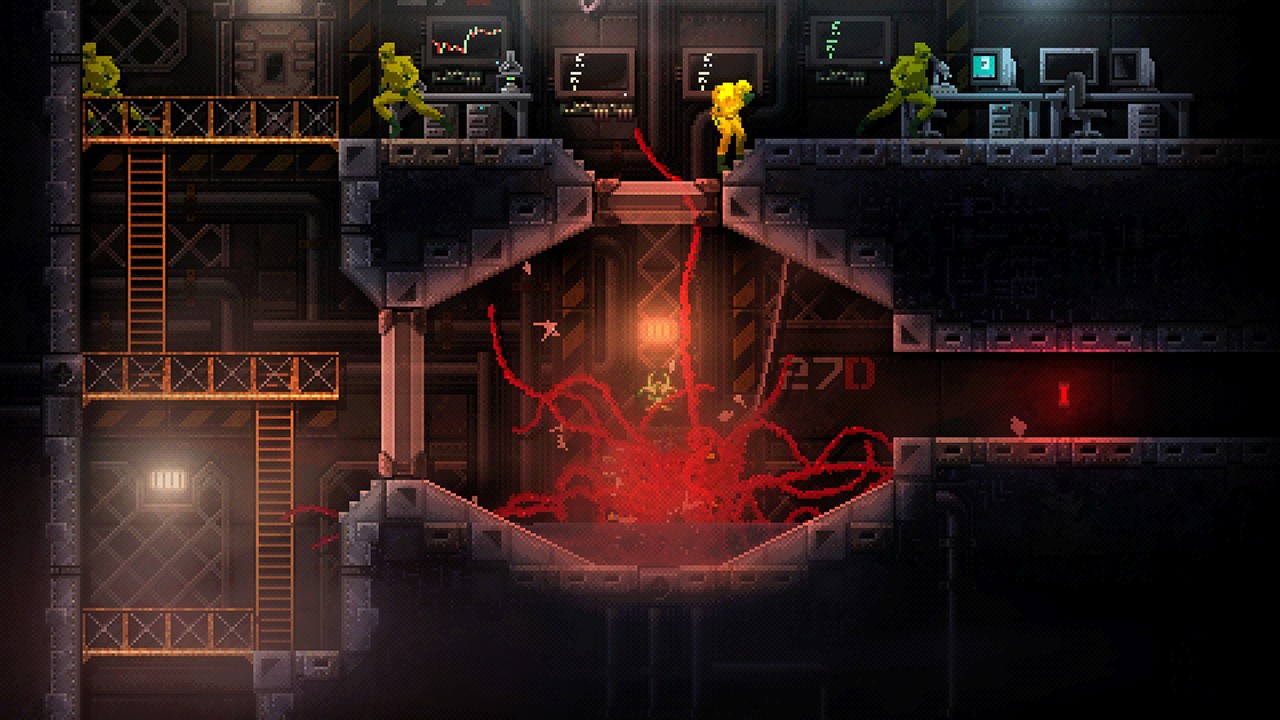 Picture the scene: you’re creeping down a dark corridor, afraid and unable to defend against the horrors that lie in wait. That’s when it happens a noisy mistake or reckless sprint and suddenly the creature is on you, relentlessly tearing into you with teeth and claw. Black screen. Game over. Try again. It’s a scenario horror game fans will have experienced, but Phobia Studio’s Carrion hopes to reverse the roles. No longer will the player control the helpless bag of meat at the mercy of your foes, but rather the demonic monster itself.

Carrion takes heavy inspiration from classic extra-terrestrial horror cinema, such as Ridley Scott’s Alien. This can be seen in almost all aspects of the game’s design, but most notably the brilliantly crafted monster. A writhing ball of blood and tentacles. Clear parallels can be drawn between Carrion’s grotesque creature and the one seen in John Carpenter’s iconic gorefest, The Thing. Whether devouring victims with its gaping maw or using its lurching tendrils to zip around the 2D landscapes, everything about the monster’s design feels wonderfully on point and incredibly satisfying to control. Some environments can get a little repetitive, consisting mostly of the same hallways and labs, but to be honest, this doesn’t detract too much from the otherwise excellent atmosphere and settings. This 80s sci-fi aesthetic is, as well as the game’s brooding tone, is also complemented nicely by some pretty catchy synth beats. Likewise, the story is suitably ambiguous and mysterious, predominantly told through flashbacks which are absent of any dialogue. 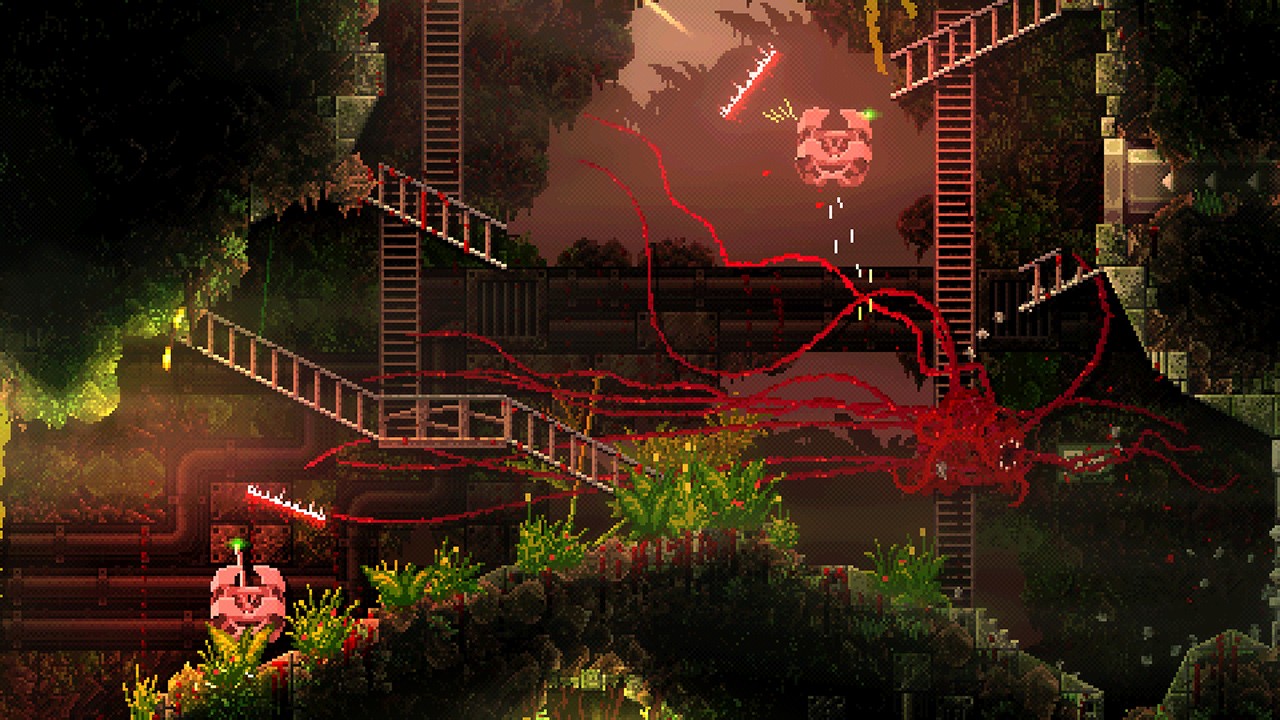 The gameplay in Carrion is very reminiscent of retro Metroidvanias, as players must scour the labyrinthine levels to find new abilities in order to progress. From launching gruesome spears out of your body, to taking control of an unsuspecting human and forcing them to do your bidding, these abilities have multiple uses in combat, navigation and puzzle solving. Sadly, many of the puzzles boil down to finding and flicking switches, a task which lacks any real difficultly or variety. The combat, although still relatively challenging, is somewhat more forgivable; tearing through hordes of humans with ease seems befitting when playing as an otherworldly apex predator. Players’ health is directly correlated to the monster’s mass; at full health they’re a huge bundle of bloody destruction, steamrolling enemies like an oversized wrecking ball. Take too much damage though, and you’re suddenly a measly splodge of goo, forcing you to switch up tactics and take advantage of alternative routes. This could include sneakily using a vent to get the drop on a soldier and catch them off guard or ripping out and launching a door to throw them off their feet. Furthermore, the introduction of different enemy types adds at least a bit more dynamism to the fighting. However, aiming your tentacles using the Switch’s joysticks can get a little finicky and was most likely designed with a mouse and keyboard set up in mind. 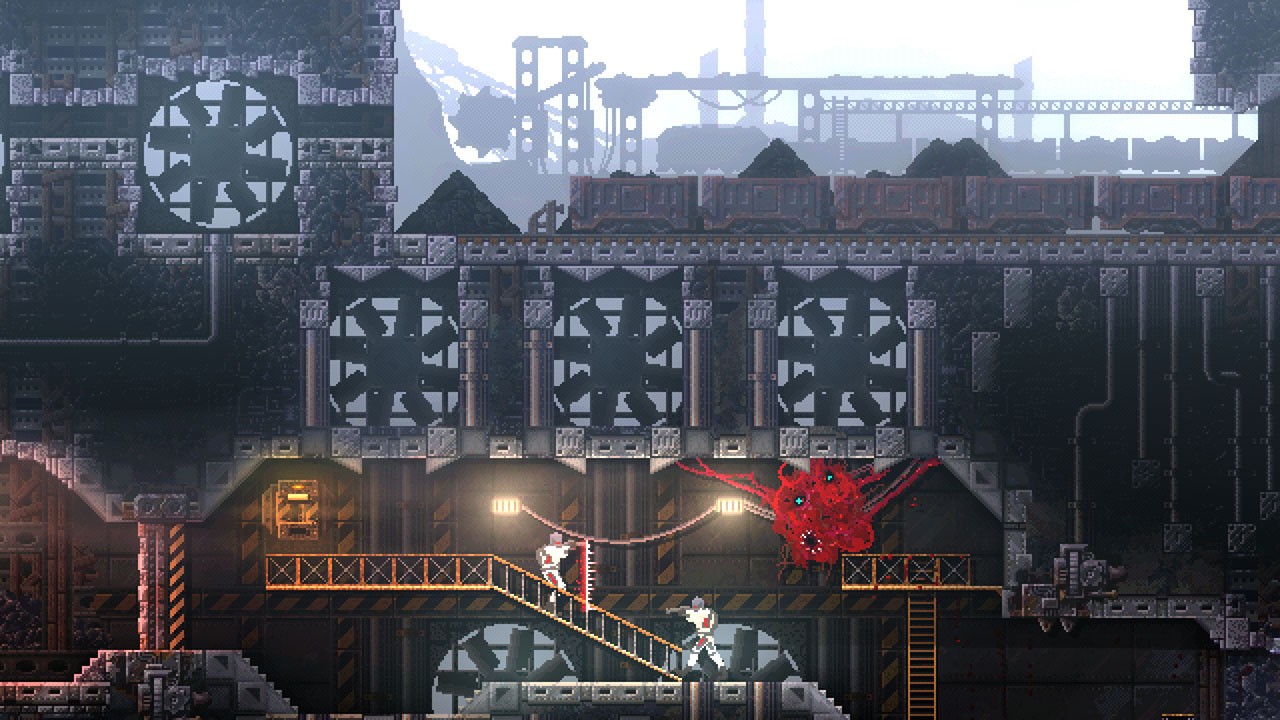 An apt description for Carrion would be ‘Short and Sweet’, with its main story taking around six hours to beat. Optional upgrades can be found off the beaten track, however, these aren’t particularly worthwhile and the lack of any map or logical navigation tools makes exploration a tiresome chore. With that in mind, Carrion might not be an appealing purchase for the average gamer. That being said, its premise is a refreshing new take on the horror genre and one which I’m surprised more developers haven’t tried. With this goal in mind, Carrion certainly delivers, perfectly capturing the feeling of being a bloodthirsty alien entity. Fans of classic horror and gore will find this loving homage particularly enjoyable.

Not to everyone’s taste, this grisly Metroidvania is a must for die-hard horror fans.