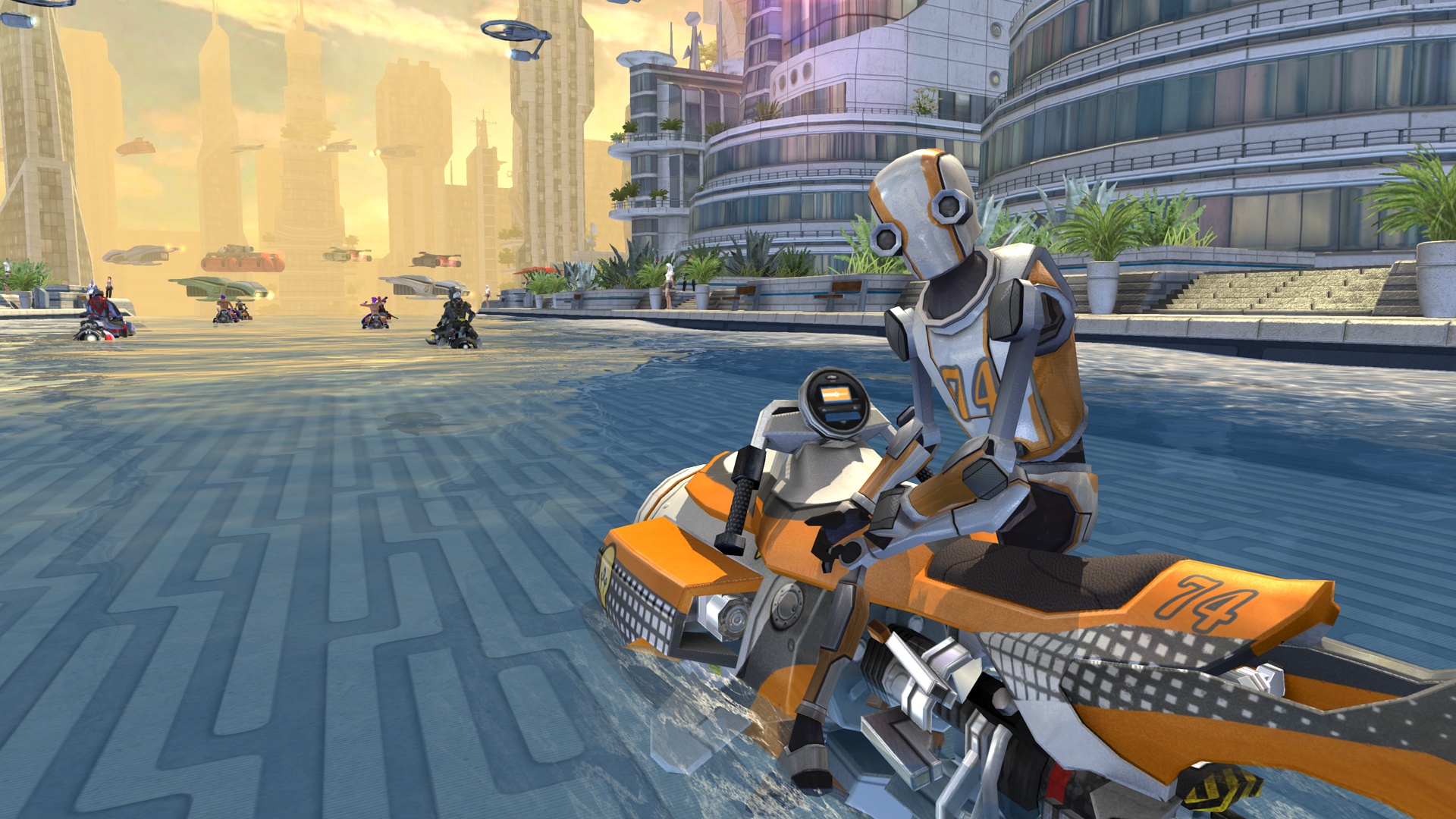 Riptide GP: Renegade is the latest installment of the Riptide GP series, which, if you didn’t know, are a bunch of titles that have been on smartphones and are all about extreme jetski racing. Renegade is the particular tale of how you were set up, years ago, by a rival racer and went to prison for participating in an illegal street(?) race. Finally free and getting back into the habit, you’ve vowed to make your way back into the circuits and take the top spot at GP champion, a role currently held by, surprise, the guy who got you arrested. It’s a bit silly, it’s kind of dumb, but it’s far better a setup than I could imagine, and I do love the idea that, the further we get into the future, the more we keep coming up with ludicrous sports to whet our appetite for adrenaline.

Graphically, Riptide GP: Renegade does a pretty decent job of encapsulating what it might be like if every major city also had a couple of streets that looked like Venice. The water effects are decent, and you’ll get some delightful splashback on the camera every so often when you encounter some particularly choppy waves. The vehicles themselves are pretty decent looking, with a fair amount of customization as far as decals and paint jobs go (though the former needs to be unlocked through a lot of playing). I’m honestly impressed this was a mobile game first, and I think, soon, we’ll be able to drop that moniker as either a precaution or as an establishing precedent before viewing a game. Seriously, if we have to slap “mobile” on a title like Gear.Club then I think we have truly lost the implication of that word.

Gameplay wise, Riptide isn’t going to win any awards for complexity or realism. You go, you brake and you occasionally fire off the turbo. The turbo boosters naturally recharge when you do sweet stunts, and those are done through combinations with the two joysticks after you go off a jump. The stunts are sometimes difficult to pull off, however, when you go off a minor jump instead of waiting for a more significant ledge to launch yourself and play from there. New players will get seriously tripped up during the tutorial level, as the game asks you to do a tabletop where there is almost no room for it, and, most of the time, you’ll simply crash, recover and move on like nothing ever happened. It’s not a bad thing, but it feels almost pointless to ask the player to do something that can’t happen and won’t penalize you if you do it wrong. 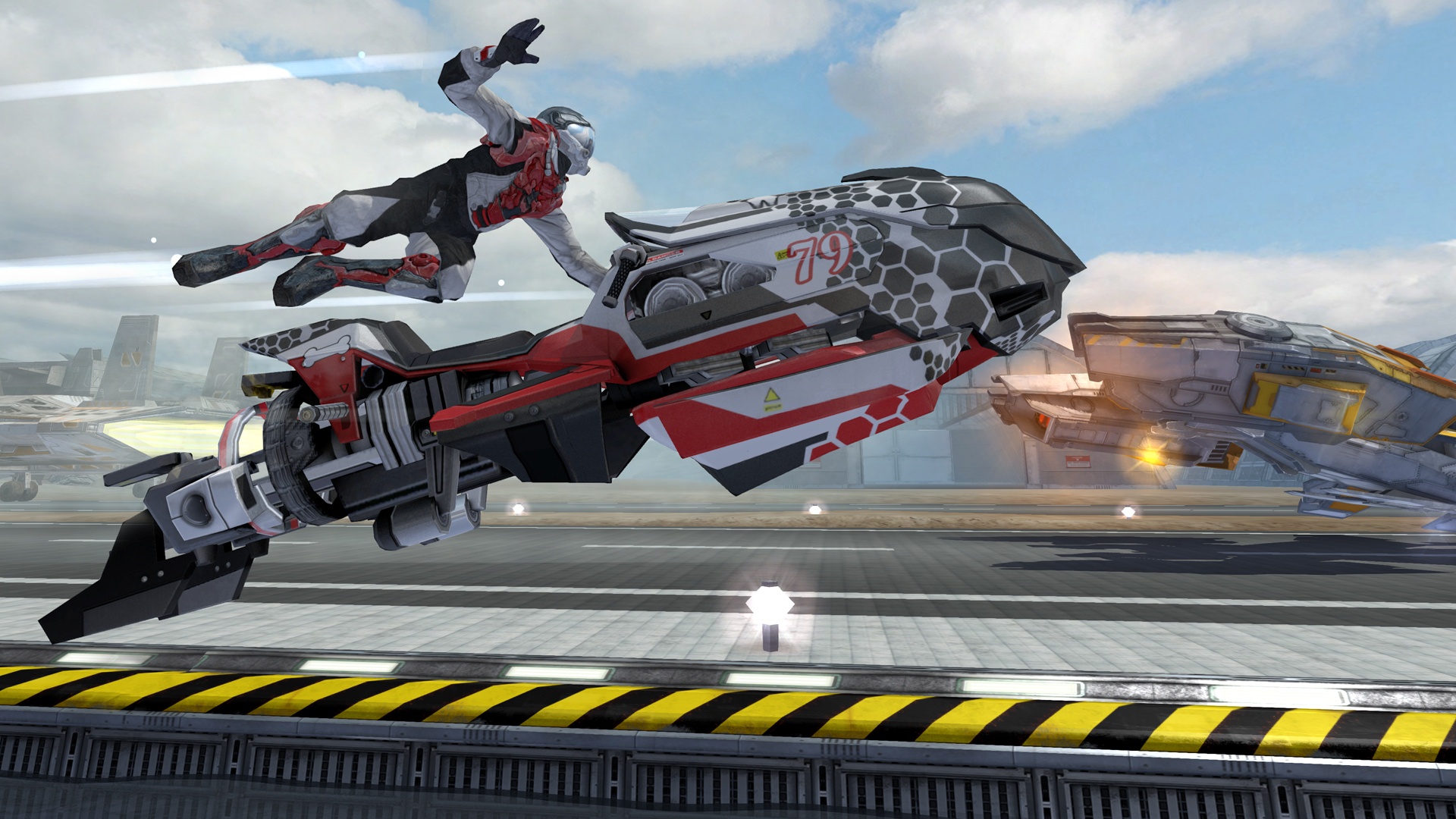 Digging into the single player mode is where players are going to find the most fun. Besides having full control of the real estate of the screen, players also get a chance to maximize their ride experience, being able to work out larger turns ahead of time on the mini map and also being able to appreciate the full capacity of what the game is capable of. Leaning into turns is a learned experience, as longtime driving game players may want to simply slam left or right to pull off tight turns. Riptide, with some surprising realism in regards to how jetskis work, will penalize you for leaning too hard and either jam you up or potentially flip you all the way around. The more you play, the better you get at this simple idea, so the single player mode is definitely the stomping ground where you can work this out.

Moreover, single player mode is also where you’ll be building up cash to unlock upgrades and new models of jetskis to use in the GP. Riptide GP: Renegade has a surprisingly large number of fictitious yet awesome models of watercraft to use, and I immediately fell in love with the Scimitar once that became available. In a world where everyone is deadset on cars, planes and trucks being as true-to-life as possible, it was really cool to have a bunch of potentially non-aquatic vehicles be my stable of ships and then be able to shred and enjoy without having to worry about silly things like “physics.”

The single player experience carries over well to online multiplayer, where there’s a decent number of folk willing to do an “outrun” type race against the police and other players. This mode is also available for offline splitscreen, but it comes with a few caveats. For one, split screen: you’d be surprised how quickly you get frustrated in viewing once the screen is cut in half or, worse, into fourths. For another, the controls change drastically if you do multiplayer. Sure, if you’re the kid who has several sets of JoyCons or pro controllers lying around, you’re good to go, but the Vector Unit devs knew this wouldn’t be the case for everyone. So, if you’ve only got one set of Joycons, each player can use one, but now your controls are hamstrung. No stunting, obviously (you need two joysticks) but also no acceleration control. In multiplayer with only one JoyCon, the game decides to just auto-throttle and that felt damn weird. Of course, I always just kept the hammer down when I was racing anyways, but taking the choice out of the players hands felt wrong. I specifically recharged the old SFC30PRO in order to play two players properly, and my friends agree that not being able to stunt or apply gas yourself sucks. 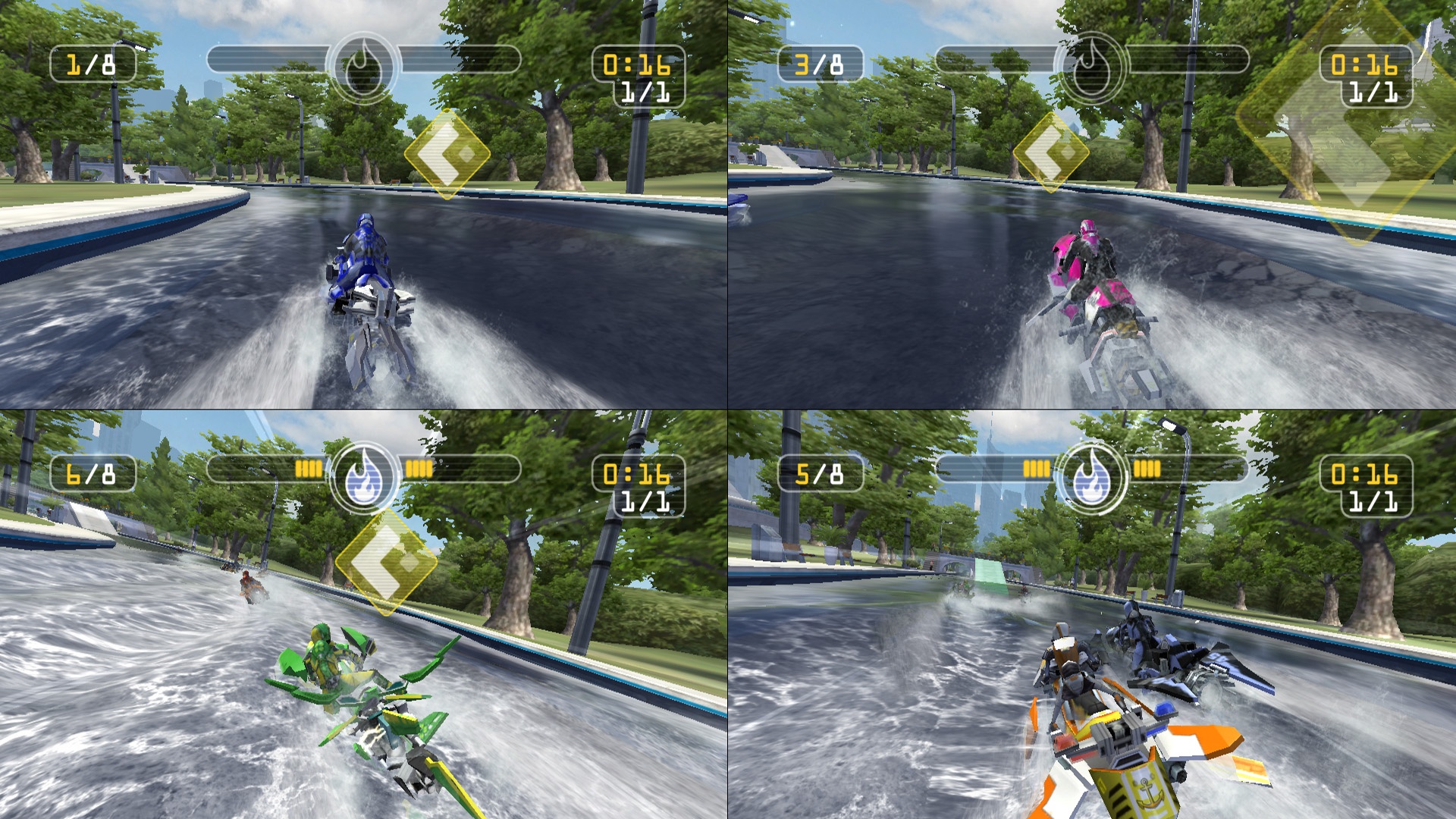 In terms of replay value, there’s quite a few single player missions, and the online multiplayer has a good number of available racers at the current time (US PST, welcome home). Speaking from experience, players from Asia may have difficulty finding matches, as this type of game is more popular in the West, but don’t give up hope! Online multiplayer, again, just so much more satisfying than local.

All in all, a bizarre sort of racer, but Riptide GP: Renegade delivers a properly campy story, complete with hammy villains and sidekicks and makes the whole thing work well. If you’re waiting on Waverace 64 to get ported, keep holding your breath, but if you want a great water runner and can get over yourself, then Riptide is the buoy to grab onto.