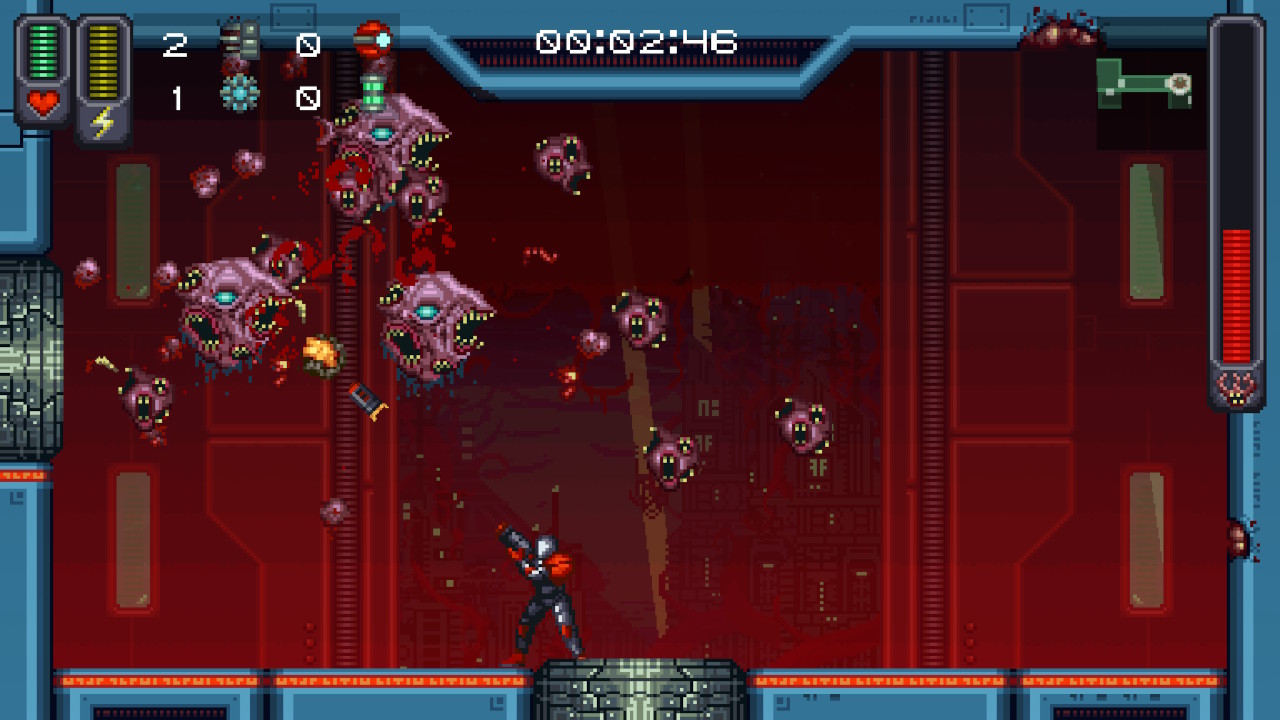 Another entry has arrived on the Switch in the ever-expanding category of roguelite/procedurally generated. The handheld monstrosity, with the portable appeal and unstoppable expansion potential, is a lightning rod for games that offer maximum replay value, and roguelite just can’t seem to stay away. But players do need a bit of spice in their lives. You can only have so many dungeon crawlers in your back pocket before you grow utterly exhausted. So for one team, almost literally a one man team, to take the idea of “random” and apply it to a new genre is a huge breath of fresh air. The fact that it’s done quite well only makes it better. This is A Robot Named Fight.

The world of A Robot Named Fight is a confusing one. Apparently mechanical gods decided to wipe out organic life some millenia ago, leaving robots as the sole inhabitants and defenders of a particular planet. One day, the planet was invaded by giant, meat-based monsters from space, lead by a particularly grotesque and huge monster, the Megabeast. Megabeast seems to want to simply overrun the planet, and you’re not going to let that happen. Diving beneath the surface of the world, this nameless robo-protagonist must uncover weapons and artifacts of days gone by to arm itself and fight back against these fleshy parasites. Fail, and it’s the end of the world. Or, at least, the end of your existence. After all, you’re simply one of many, many robots: someone will get the job done.

Looking at the screenshots, it’s easy to see that A Robot Named Fight draws a ton of inspiration from Super Metroid, and that’s exactly what you’re going to get here: procedurally generated metrovania. Each run, the map, the item placement and leagues of other things are completely shuffled around, creating new necessity in terms of backtracking, exploration and successful forward movement. Doors are locked and can only be opened by some items. Powerups are hidden in plain sight, behind phantom walls and even in destructible platforms. When you die, you’re dead: that’s the end of your quest and good luck getting back on your feet, because, yay, it’s all been shuffled around again. This doesn’t make the game impossible. Rather, it means that strategy and knowing the game mechanics intimately are the keys to success. Run. Jump. Shoot. Survive. 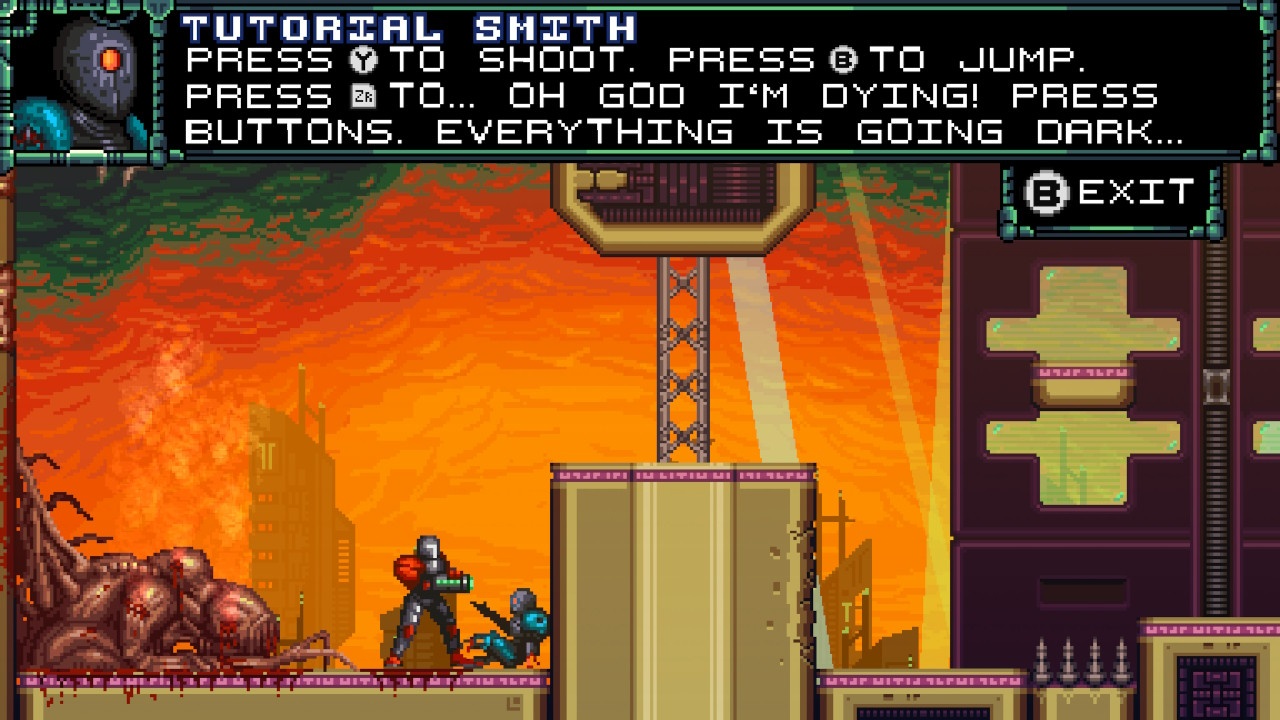 As far as I can tell, it’s entirely possible to get all the way to the Megabeast and finish the game on your very first run. Certain items are present and unlocked from the very beginning, and there won’t be a single run that will end in a dead end. However, your death and exploration are what really make the game more interesting. As you defeat certain enemies, collect enough items and appease enough gods (mechanical Gods, their shrines exist still), you unlock achievements to bring new and more powerful items into the world for subsequent runs. So, ideally, you’d do two or three runs, unlock some stuff, and then have yourself lined up for a seriously overpowered quest, but it doesn’t have to be that way. Hell, there’s one achievement for specifically NOT picking up all the items in a run, and I know this because the game generously lists all the achievements on the homescreen along with how to get them. This is so convenient and such a great gesture from the developer, who clearly wants people to enjoy the game.

There are some minorly annoying things, and they have very little to do with the game itself. The bosses, especially the minibosses, are almost too easy. Rather than be the showstoppers they could be, most of them are speedbumps at best and a brief pause at worst. None of them should be a problem if you’ve played a single metrovania previously. The smaller enemies, interestingly, can sometimes gang up on you, and will quickly make your lifebar disappear. I honestly did NOT care for the fact that enemies will just respawn the instant you leave a room, because it can seriously slow you down when you need to backtrack. The backtracking, to its credit, is far less than traditional games, but it still exists, and sometimes pointlessly. I ended up down a couple dead ends that asked me to walk about five rooms and ended in a merchant. I never came back for him, but I did fight back through the same five rooms of annoying eggs that I had previously.

But I DO enjoy A Robot Named Fight, I almost enjoy it more than Super Metroid. Metroid games, as monumental as they are, carry the inherent flaw that they are static. It’s awesome watching people do speedruns and get through the game through glitches and just the most ridiculous twitch timing, but where does that leave me? I know where everything is, it’s lost the appeal except for once every couple of years. But A Robot Named Fight keeps it fresh: you need to critically think about what you’re seeing and where it could come next. You have a timer letting you know how long has passed, and you know what you need to do, where you need to go, but you don’t know WHERE that is. It’s goddamn exciting is what it is, and it makes for a better situation. My very, very first run I got a flamethrower within two minutes, which is a murderfest for any and all enemies, including minibosses. I didn’t see the flamethrower again for five runs because I suck, and it was such longing that it was borderline palpable. 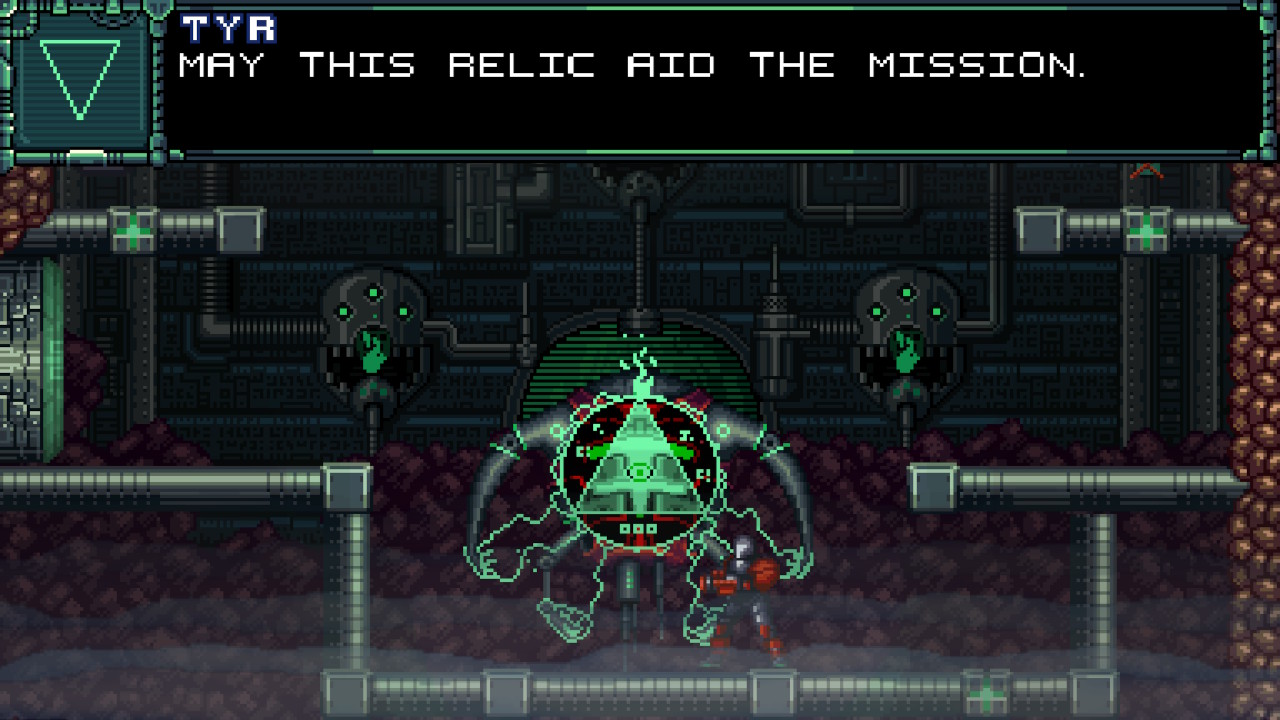 The concept, of course, would be nothing without execution. 20XX, the roguelite Mega Man X inspired game, is a perfect example of sampling from the old and blending it with the new to make something unstoppably awesome. A Robot Named Fight follows the path that Samus set forward once upon a time, but it also does a lot to separate itself. Double jump, slide attack, weirdly awesome missiles that exist as either a primary or secondary attack, and those are just in the items. Saving up stuff and sacrificing them to the robo Gods to get blessings is a cool idea, and finding out the hard way which gods like what is painful but necessary. The retrowave style soundtrack is brilliant, simultaneously evoking the music of the era while still standing on its own. The fact that I can write down seeds and share them are what make good roguelite games work, showing some great Binding of Isaac influence.

The only thing that feels like a bit of a letdown is the co-op experience. I understand that the way it functions is to basically have one player as a driver and the other as an assistant, but that feels just a bit flimsy and kind of boring. Don’t get me wrong, it has tons of implications and actually can be quite helpful (a flying, independent drone who can shoot hard-to-reach enemies? Nice!), but I wish there was a way to have two full-sized robots working at the same time. Each sharing the effects of the powerups. Maybe that’s just too unbalanced, but wishful thinking is just that.

A Robot Named Fight brings a complete, exciting idea to the Switch and I had honestly never heard of it until it arrived. Matt Bitner, the sole developer/creator of the game, should be incredibly proud: he’s birthed a game that grabs your attention and keeps it in a stranglehold. If you have any love for Metroid and want to keep yourself guessing, this is the place to be. Fingers crossed that we see DLC in the future with even more weapons, or potentially new rooms, because this is the kind of game that could grow forever.