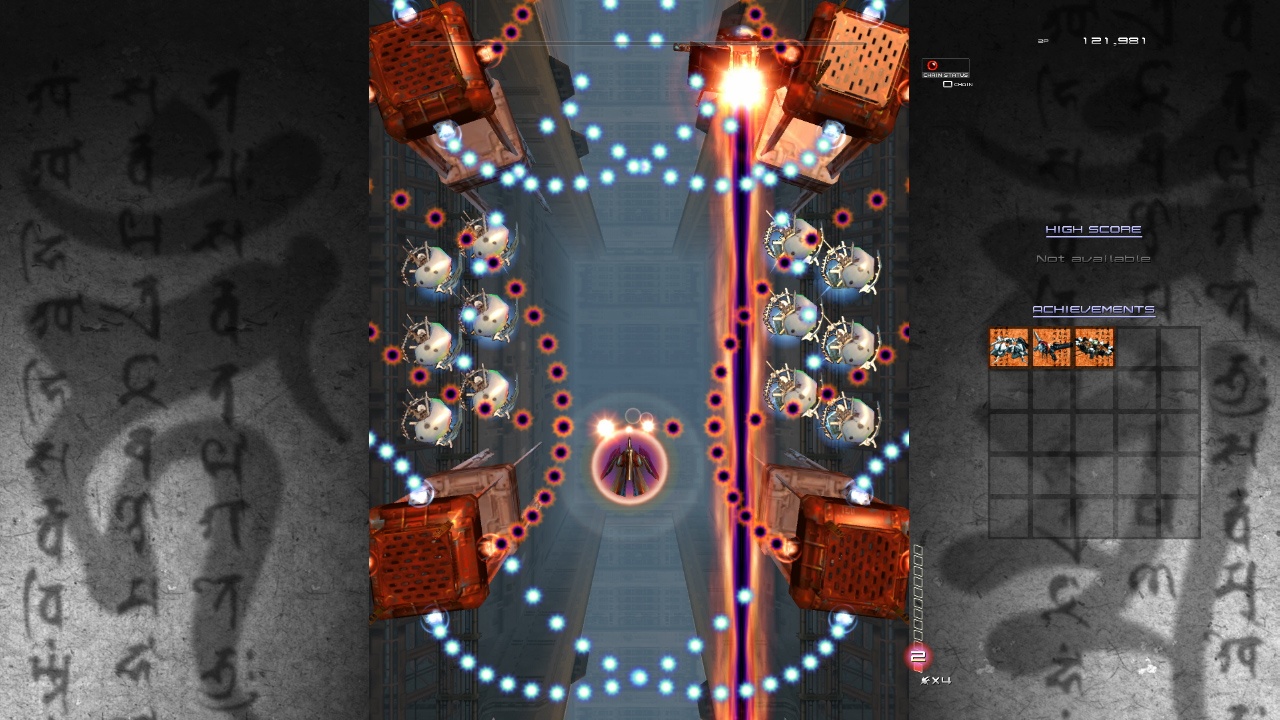 Many people will have their own “favorite” when it comes to genres, even if it’s entirely objective. The Final Fantasy series, for example, is often quite polarizing with people clocking which of the entries is the best. For me, it’s Final Fantasy VI, without any questions or compromise, and I can do that because it’s entirely opinionated. I recognize the positives and negatives of other series, I acknowledge the shortcomings VI might have (Tower of Fanatics is, indeed, bullshit) but that doesn’t make me love it any less. However, when it comes to shooters, specifically vertical shmups, I have a hard time listening to anyone who might slight against the best of the best. And now the greatest of all time, Ikaruga, has come home to roost on the Switch, thanks to the publishing power of Nicalis, and they’ve brought the best version of the game to date.

Ikaruga is the name of the legendary ship that you pilot in the game, taking on the persona of Shinra, a rebel survivor of a magical madman. The Ikaruga has the ability to shift polarities, absorbing and firing both types of energy used by the enemy (light and dark). With the few free men and women putting all their faith into Shinra, it is a matter of speed, reflexes and split-second reactions that will either ensure the future to the cruel emperor Horai or to the free people of the world. Shmups are often either too plot heavy or too plot lacking, but Ikaruga flies right down the middle with plenty being extrapolated through small exposition between the games five chapters. It’s enough to keep the player invested, but not enough that they need to take notes.

The joy of Ikaruga comes from the very unique way that the game plays out the shooting mechanics. As mentioned above, your ship can shift between dark and light, which creates a very detailed and also varied play approach. Light ships can still be damaged by light energy, but will receive substantially more if shot with dark energy. However, if your ship is set to light, you can absorb all the white shots that come your way, effectively making you invincible against those enemies. Inversely, dark energy does the same in the opposite spectrum, and both are extremely vulnerable to the other: if your ship is set to dark and you take a hit from a light particle, you’re done. Instantly. So will you rely on defense and try to match the opponent’s ships, or go heavy on the offense and play opposite, knowing you’re in great danger? The choice is up to you. 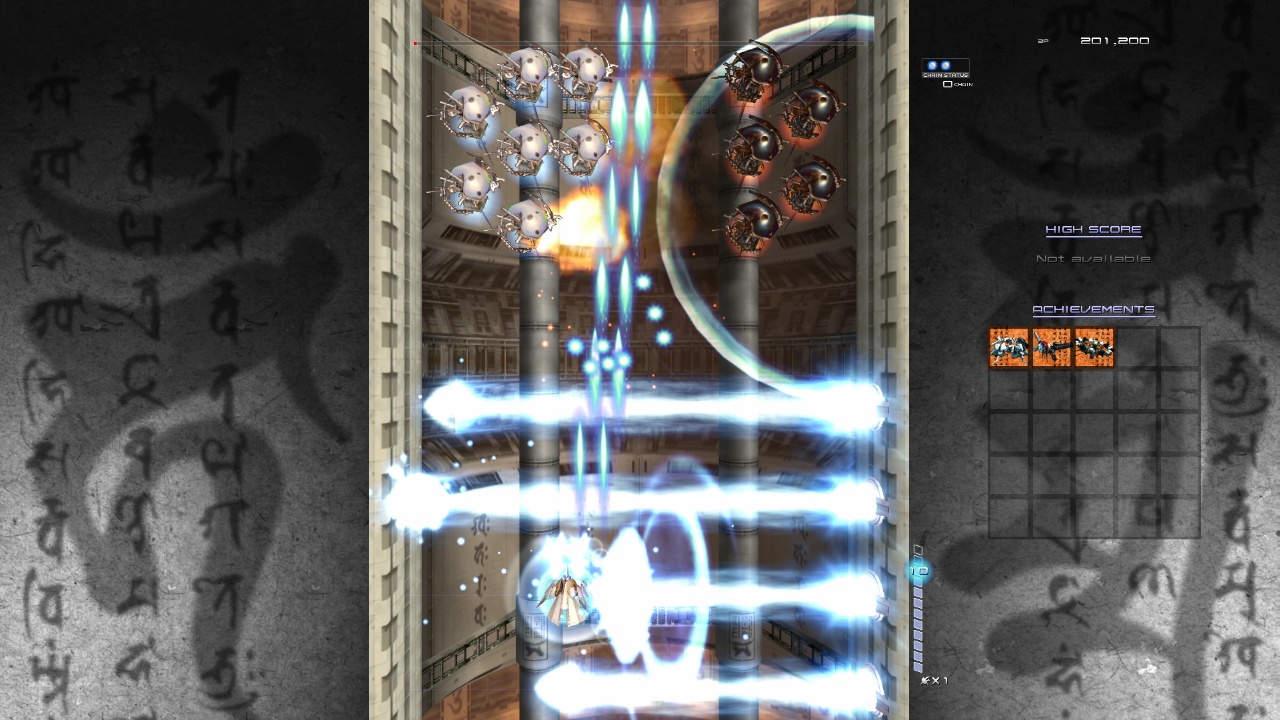 And it’s not like the game is foolish or lazy enough to only send waves of a single color. This is the evil, crushing empire we’re talking about, they don’t slack on the job. You’ll barely get two waves out before enemies start mixing and matching in hues, forcing you to start swapping colors like crazy. That’s what makes Ikaruga stand out quite a bit from traditional bullet hell games: there are several instances where there is no escape or safe place except to quickly and rapidly shift color tones to absorb and dodge damage as best you can. It’s best to start on easy mode, no matter what your pride may say, because it acts as a perfect training wheel set to see how to play. Normal means more ships start shooting at you, and hard means that ships shoot at you even after death, really mucking things up. This is all before you get to the first of several boss fights where, surprise, the bosses use both ends of the spectrum to stomp ass. What, you thought you were the only ship who used more than one polarity? You actually shift, they just have the guns.

As a single player game, Ikaruga is already incredibly fun and frustrating in execution: it’s a game that you can play cold, but will benefit and enjoy much more from learning the patterns and the when and where of enemy spawning. But Ikaruga also offers two player mode, which is such a goddamn trip unto itself. Having two legendary ships that can shift color (try not to unpackage that one) makes for a total game changer. Not only can you split the workload in half, you now also have a friend or loved one who is the ultimate in personal bodyguard, and you for they. There’s no friendly fire to speak of, so you won’t accidentally nuke your brother while hiding behind them, but they will absorb all the nasty shots that come at you. This is one of those things where a single player game is great, and a two player game can be even better as long as whomever you’re playing with is on the ball. Otherwise, it becomes the worst couch co-op situation, because your friend totally could have saved you if they shifted polarities fast enough.

If, for some reason, you get the hang of the game, even the two player game, and need to challenge yourself in a deeper way, the Prototype mode of Ikaruga offers insight into how the developers, Treasure, originally pictured Ikaruga to be played. The idea is to have a limited 300 bullets (which go goddamn FAST in bullet hell) and then recharge your shots by absorbing incoming damage from the other ships. It’s interesting, and certainly challenging, but it does break up how the game flows and kind of subverts the inherent action mode of shmups. I like it, but it’s not my go to when I want to play Ikaruga. Being able to dive in and mash the fire button while going nuts is the speed and atmosphere that most shooter enthusiasts derive, and the Prototype mode is even atypical of other danmaku games, because you spend more time leaning into the shots instead of away. It’s worth a try, and who knows, maybe you’ll love it. 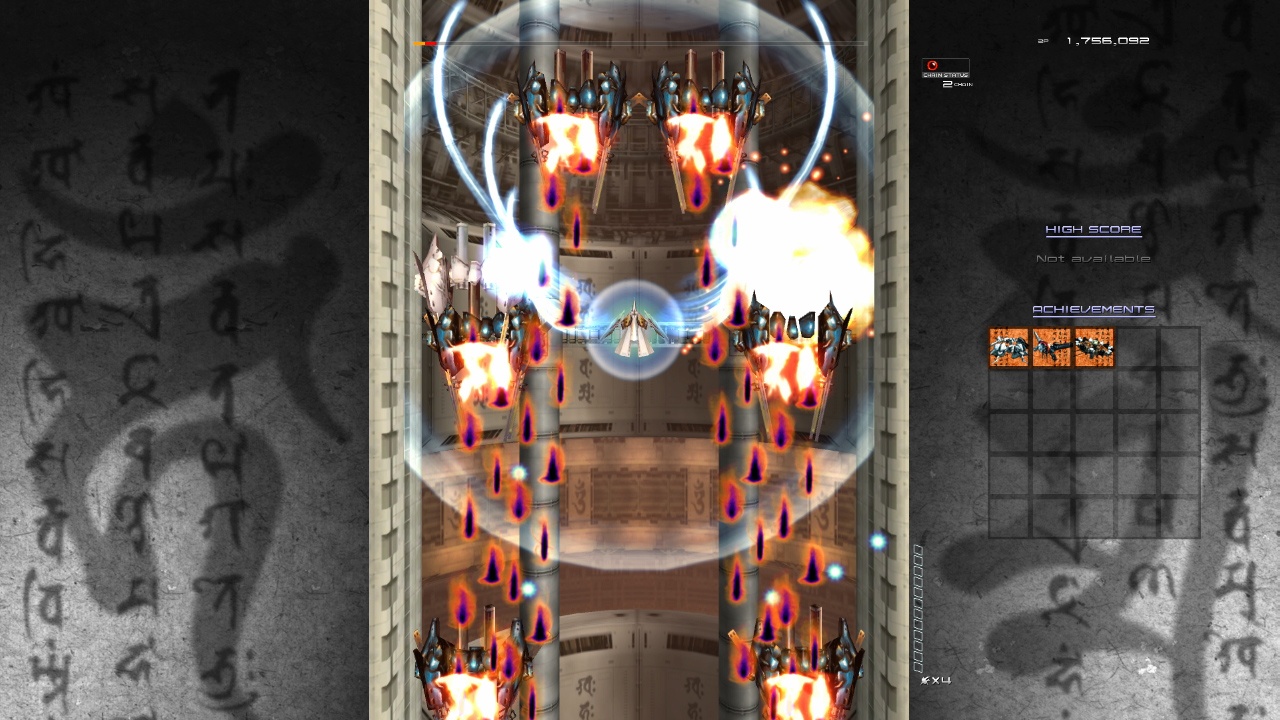 But it wouldn’t be a Switch port if we didn’t talk about everything that went right with this version of the game. Yes, of course, orientation rotation is available for both docked and handheld mode, so feel free to lean your television on its side and then not sue me for suggesting as such. Everything from the volume to the HUD size can be tweaked, and you can modify the ability to continue, the number of lives and so forth, but doing so will remove you from an online leaderboard of high scores, including easy. The leaderboard, by the way, takes a WHILE to sync, due in part to it syncing all of your scores and also any replays that you choose to save, because players from around the world can download the replays of other high score leaders. Yea, so if someone blows your top score away, you can download and watch what they did to maybe pick up a few pointers. It’s pretty freaking awesome.

Lastly, and strangely, the HD Rumble. Now, the graphics and audio are essentially the same as they’ve always been, maybe cleaned up a little but nothing drastic. And, being a game that came out in 2001, there isn’t really a barrier for the Switch to overcome in terms of rendering and smooth playback. So they decided to implement some truly delicious, incredibly precise, almost atmospheric rumbling. The way that the Joycons twitch and hum when your ship is in action, the jolt when you get destroyed, the way that you stop feeling like playing a game and start feeling like piloting a ship is MARVELOUS. Not since Blaster Master Zero have I noticed such detail in the rumble, and it’s enough that I had to draw attention to it in a big way. If you’ve been playing with a 3rd party controller or a USB-connected Gamecube setup, put that away and either pick up JoyCons or your Pro Controller and enjoy how this game FEELS, not just plays.

I love to play new games on the Switch, no doubt, and it would be such a boring grind if everything that hit this system was a re-release. However, having a really great game get a really, really good port makes total sense, and Ikaruga continues to be the ship that I will always put money on. If you’re a bullet hell aficionado or just a casual shooter, you simply must pick up this game. It changed my life, and I bet it can change yours.