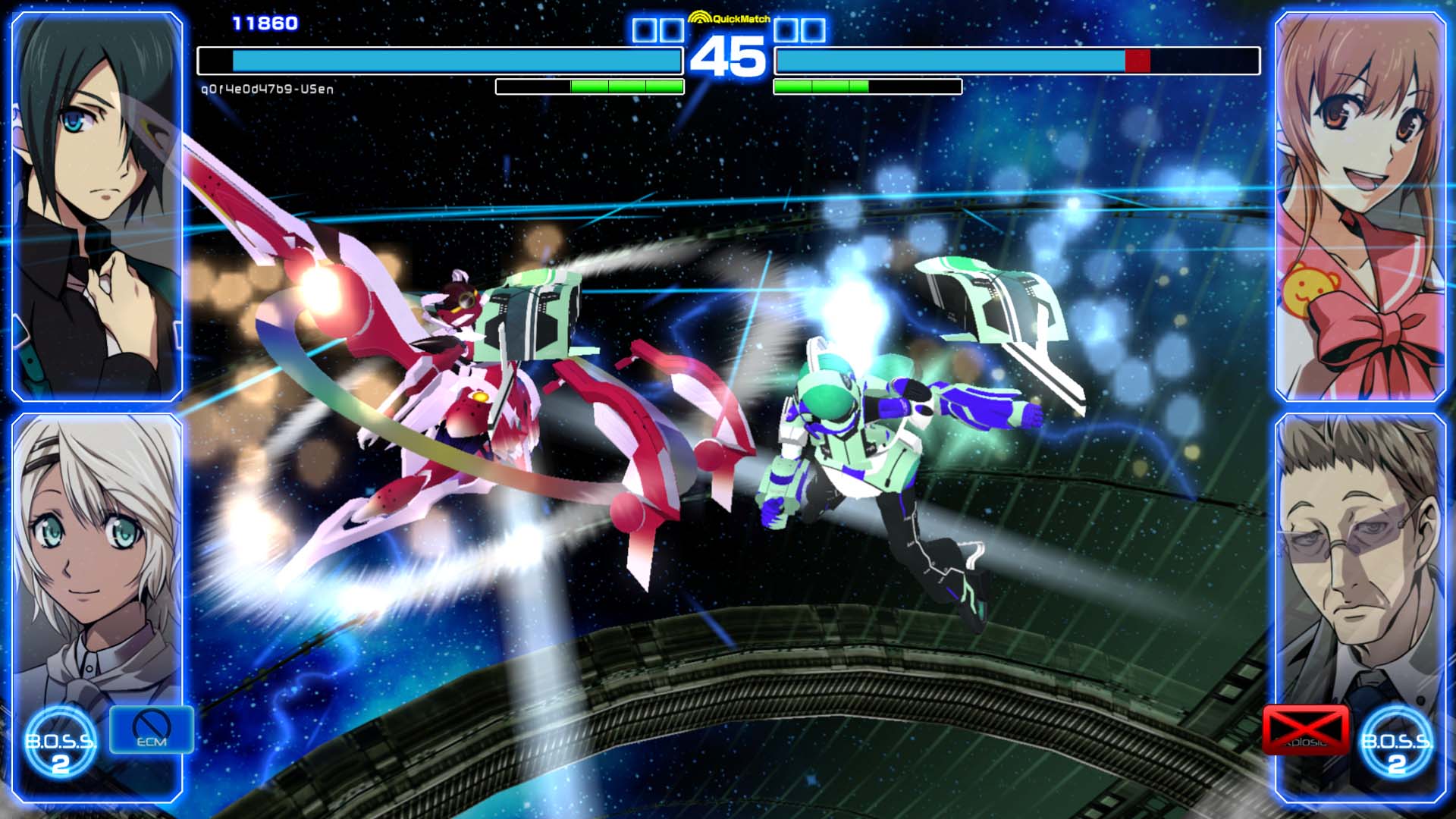 Senko No Ronde 2 has taken a pair of unsuspecting genres and smashed them together. At first, I was sceptical about the marriage of the beat-em-up to the shoot-em-up. After all, these are two types of games with extremely different fundamentals. But there are those that would argue that a decent bullet-hell game or (danmaku in Japanese) is similar to a good fighting game in many ways, each requiring tight timing and fast reflexes. And although it takes some time to get to grips with what the hell is going on, after a while Senko No Ronde starts to feel like an unholy union between the two genres.

The one vs one battle is played from a birds-eye-view perspective, with each player controlling a battle-mech, using a number of different attacks in an attempt to ‘vanish’ their opponent. Your main weapon (X)  can be fired indefinitely, while your sub-weapon (circle) can be fired until it runs out of ammo, which will be replenished over time. Square fires your ‘barrage’ weapon which can be used as long as you have the ammo, different to your sub weapon in the fact that its ammo needs to be collected rather than it regenerating. Mecha-melee battles can be achieved by getting into close range and pressing a face button, which performs a rock-paper-scissors series of attacks, each one designed to trump one another during combat. Each mech has a support attack that can be called in roughly every minute and a half with a push of L1, while a push of L2 turns them into a screen-filling bullet-hell mega-boss. 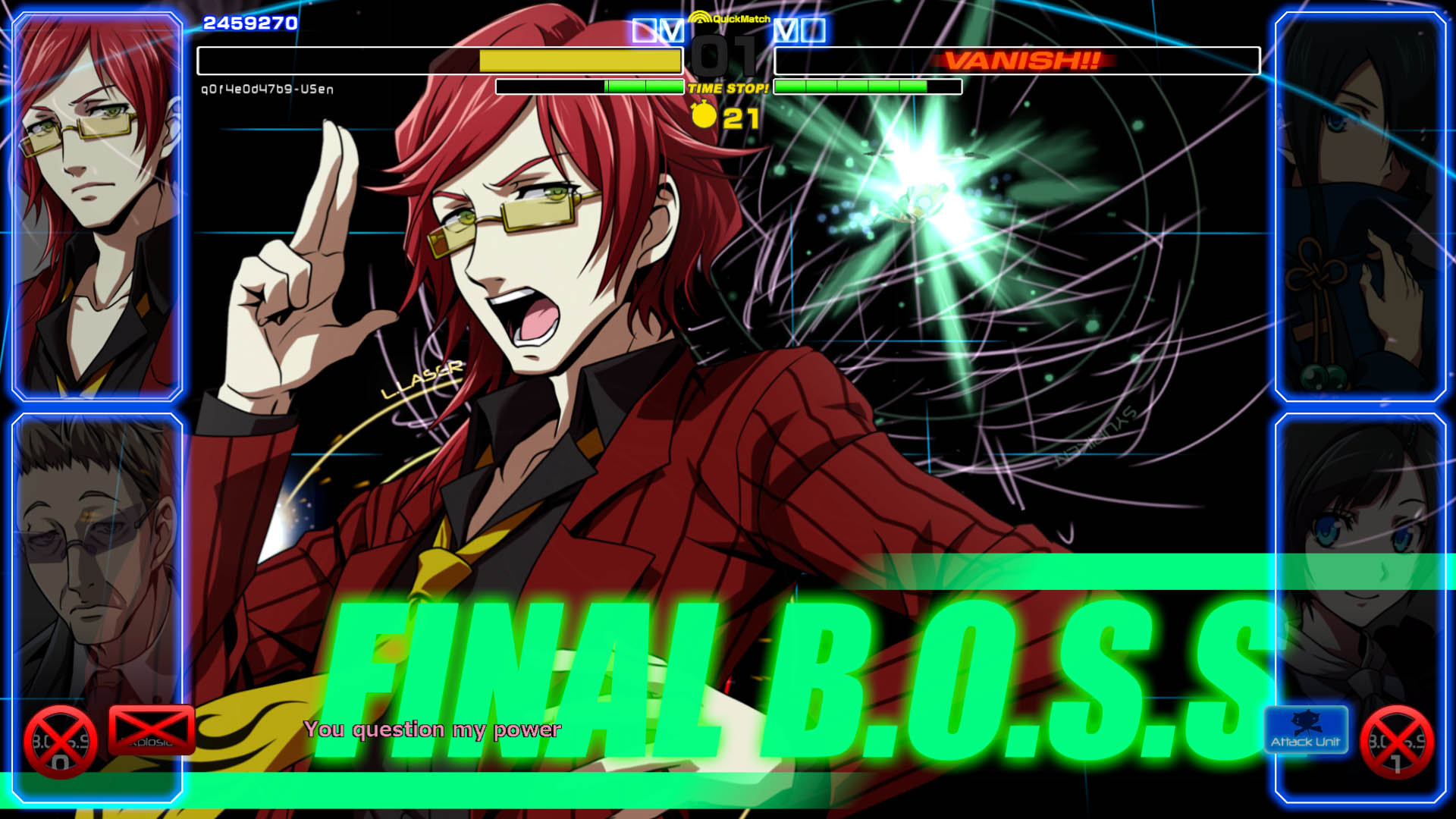 At any point during the match, if you have a charge stored up, you can basically turn into an end boss. Each character turns into a death-spewing behemoth, often flooding the screen with lasers and missiles at the touch of a button. You’ll get an extra pool of health to complement your newfound stature and a set time limit to do your best bullet-hell impression. Activating this mode while on the brink of death (brink of vanish?) will transform you into a ‘final boss’, a bigger, badder version with more health and even more powerful weaponry. Pulling this off in the middle of a battle feels pretty sweet as it is, but is also full of tactical benefits.

Because there can only be one boss on the screen at once, timing is crucial. Pulling it out sooner rather than later will net you early damage, but if your opponent saves his or hers until the very last second, their final boss might annihilate you. And although waiting to be able to transform into your final form might seem like a good idea, if your opponent beats you to it while you are already on low health, you’re probably done for.

Each of the mechs also handle extremely different from one another, and with quite a large roster available, getting used to the way each individual wants to attack takes some time. Machine guns, lasers, rockets, grenades; each ship requires different tactics to achieve victory, with some being less obvious than others. One particular example that stands out relies on deploying reflectors onto the battlefield, which when shot, direct a more powerful attack at your actual foe. There are a lot of unique attacks, most of which put a satisfying amount on firepower on-screen to begin with, and only get better in boss mode. 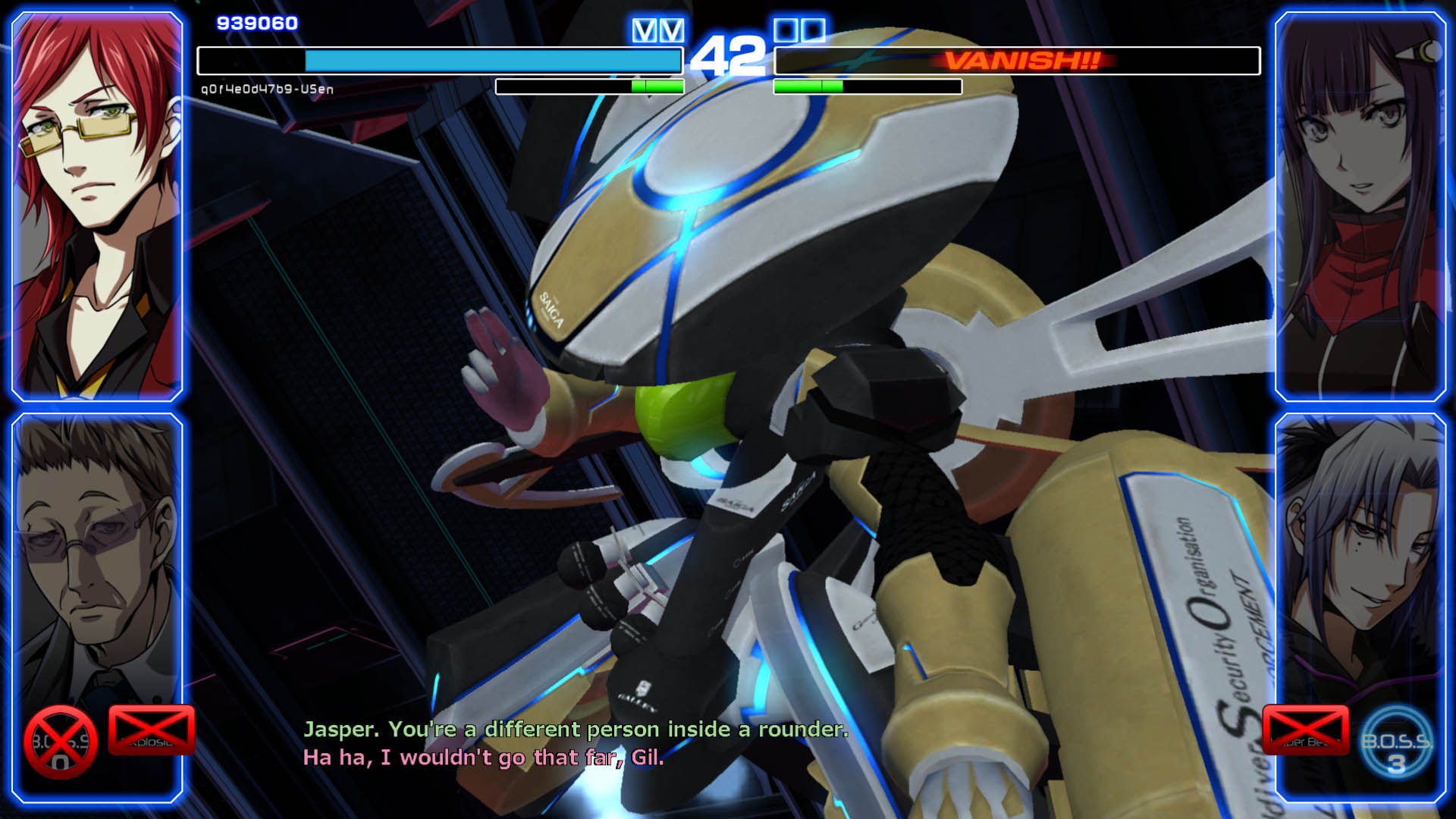 Visually, it’s a bit of a mixed bag. While the sheer amount of projectiles crashing around the battlefield can sometimes feel quite impressive, the mechs themselves are somewhat lacking when viewed from a top-down perspective. They also lack any real character, with all but a few being humanoid-shaped battle suits rather than designs with any unique style about them. The arenas are also a bit of a disappointment. The background is animated to make it look as if the players are hurtling through the space or through abandoned stations, but as far with no objects or anything to interact with, the background is less ‘dynamic’ and more ‘animation-on-a-loop’.  The music is suitably techno, but as all the voice acting is in Japanese (and with no dubbing available), I had no clue what was actually being said during the matches and cutscenes.

After all is said and done though, I’m going to find it hard to recommend this game to anyone but fans of the bullet-hell-schmup genre. When you start to get the hang of how a ship plays, it can be fun to play in short bursts, but anything longer than an hour or so starts to get a bit tedious against the computer. Turning into bosses (and besting opponents that attempt to do the same) is great for a while, but lacks any real progression due to the arcade nature of the game. It has local and online versus modes, but the at the moment, online play is terribly laggy (for me anyway). Watching a screenful of bullets lurch painstakingly slowly towards you and lag-dodging into each and every one of them is nothing short of infuriating, although local multiplayer (understandably) worked fine. Theres a story mode available, which uses a visual-novel style narrative, to allow you to get to know each of the characters and the events that unfold to bring them together. Often a couple of chapters of story will be punctuated by gameplay, and adds a little extra flavour for those interested. But ultimately, it’s a little bit too expensive for what it is. Thirty three pounds is a lot of money to drop on a game like this, which is ultimately only going to keep fans of the genre interested for more than a few hours.