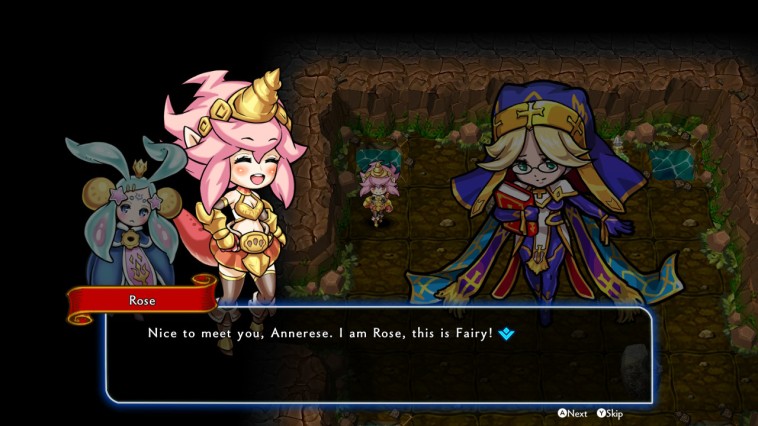 DragonFangZ: The Rose & The Dungeon of Time should stand out for three distinct reasons. Firstly, it’s completely insane, and I don’t think that was the intended purpose of the game. Secondly, I’ve never cared so little about anime characters, and I think that’s because the design somehow makes them less appealing and engaging than your average heroine setup. And, lastly, it’s a cautionary tale to anyone looking to simply bring a game onto the Switch (or any platform) without any kind of investment into checking their translation beforehand.

The plot of DragonFangZ is surprisingly simple. Rose, a half-dragon girl, has gotten stuck inside of The Tree of Time as a matter of happenstance from fleeing enemies. Rose is accompanied by a fairy named Fairy, because fairies aren’t supposed to say their real names. So far, story checks out. Once inside the tree, they’re told the only way out is to find a long-forgotten treasure that’s somewhere deep down below, so, naturally, Rose sets out, accompanied by Fairy, to find the treasure and get back home. It might take you a couple of tries at reading the dialogue to get to that conclusion, but I assure you that’s the synopsis as best as I could extract everything.

A true blue roguelike, Rose and Fairy have to move in a grid-like fashion across multiple, procedurally generated dungeon terrains, fighting enemies and picking up items/power ups along the way. Death means starting the level over, and everything is completely randomized at the time of spawn. As everything is turn based instead of real time, you do have an opportunity to plot out your move and not just rush into everything, though you don’t need to worry too much about strategizing. The monsters, by and large, will follow predictable patterns, and there wasn’t anything save for a few larger bosses that require much more than an almost unconscious button push. 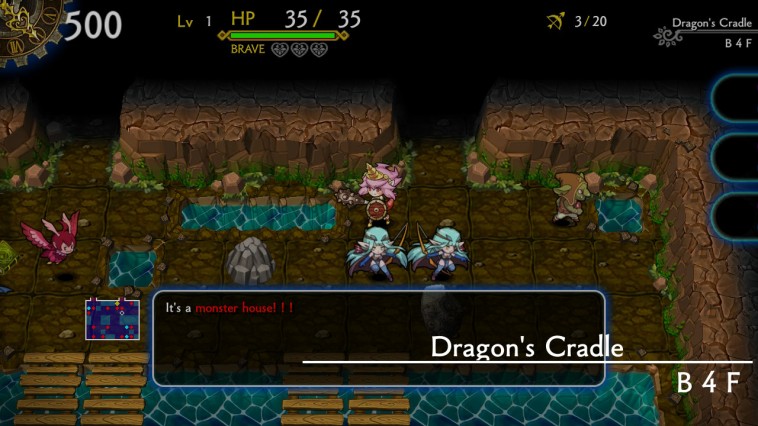 Additionally, I do have to admit that DragonFangZ has a few interesting mechanics to keep the gameplay fresh and engaging. There’s the Fang system, where Rose can obtain certain items dropped by defeated enemies and then using the abilities their fangs create. Though you can only equip one at first, Rose can eventually wear several at once, and mixing and matching does create some cool combinations. It’s clearly a “gotta catch em all” situation without being as on the nose as Yodanji, but at least it’s got a clean presentation and good take on the concept. When things started to get monotonous, combining different fangs let a little spark in to make sure that players can challenge themselves, even if the combat difficulty doesn’t. And, should you get completely surrounded by enemies and need to clean house fast, there’s a Brave attack that Rose can recharge that’ll blast all eight squares around her, usually eviscerating smaller mobs that are just causing trouble. However, don’t bother using it on the stronger/elite monsters, as it will just eat up a turn, they won’t die (unless you’ve been hitting them for a while) and you’ll probably get clobbered in the process.

Item drops are plentiful and frequent, and there’s no issue in finding better weapons and armor fairly fast. Within the first three rooms, I had already found a stave that did quite a bit more damage than my half-dragon fists, and the hits just kept coming in terms of shields and potions that could be hurled/used on enemies. If you’ve played literally any true rouge-like, you’re already mostly aware of what we could find in the descent into things. Including rooms full of strangely anime monsters that aren’t that clever or difficult to deal with. I think I’ve beat around the bush long enough in terms of what the game does right and need to, finally, address the elephants in the room.

Anime art design is something that really makes or breaks a game, and, in the case of DragonFangZ, it totally breaks it. I think the developers may have been a bit concerned about going too far into the “stereotypical” realm of what a female lead looks like in certain games (buxom, tiny waist, etc.) and decided to focus on a chibi aesthetic in order to offset having a cute girl character. It’s logical in creation, but they didn’t really do the chibi as well as they could have. Instead of looking like proportionally smaller, more adorable versions of existing characters, Rose, Fairy and literally everyone they encounter look like they were shrunken in some kind of Shrinky Dink experiment gone wrong. There’s always something off about the characters that appears deformed or irregular, like these characters were for sale at an outlet mall and my mom assured me they were “basically like the real thing, but much cheaper.” It never really sat right with me, and, though I never could put my finger on it, the game wasn’t appealing to me on a visual level. 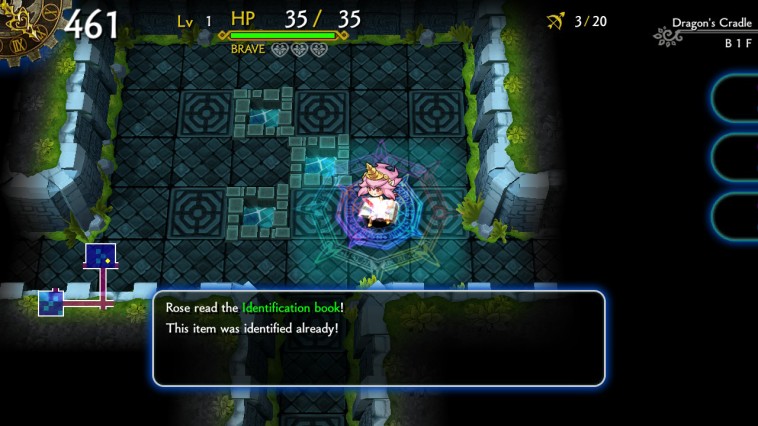 Additionally, DragonFangZ: The Rose & The Dungeon of Time has some of the wonkiest translation from Japanese to English that I’ve ever encountered. It’s not straight up machine translated: I actually took text from the game and Toydea’s website to make sure that wasn’t the case. Some kind of effort went into translating this game by hand, but I don’t think it was done by a native English speaker. Everything that the characters say and most of the descriptions are full of bizarre choices of word order, with phrases like “become tough state” for certain items, or Rose declaring, after dying, “I should probably lose a war and lose consciousness.” As someone who taught ESL for many years before finally leaving Japan and that business behind, you start to see patterns for people who write scripts, translate them, and then bounce the product off other people who don’t speak English natively but can generally read. That’s absolutely the case of what happened here, I would stake money on it. One dude paid another to translate it, the second dude barely understands English but still better than the first, and then hands in a schlock-driven script, declaring it “perfect for Western speakers!” The QA guy can’t find fault in it because he can’t read as it is, and Nintendo didn’t bother double checking the English side because, technically, there’s nothing wrong. There’s no racism, explicit language or deliberate anti-establishment language, just broken, borderline hilarious sentences that make no damn sense.

As a game, DragonFangZ is a nice vanilla roguelike with some extra syrup drizzled on to add a bit of flavor and spark to things, and, in that sense, it’s a pretty decent delivery. However, if you actually plan to read even a couple of sentences of this game, it’s a mind bending nightmare to always figure out what anyone truly wants to say instead of what they are literally saying. If you can read Japanese or, even better, can’t read at all, then you might enjoy the DragonFangZ experience with no headaches whatsoever. As for me, I need two Advil and a six hour nap to forget fifty floors of unspeakable word jumbling.