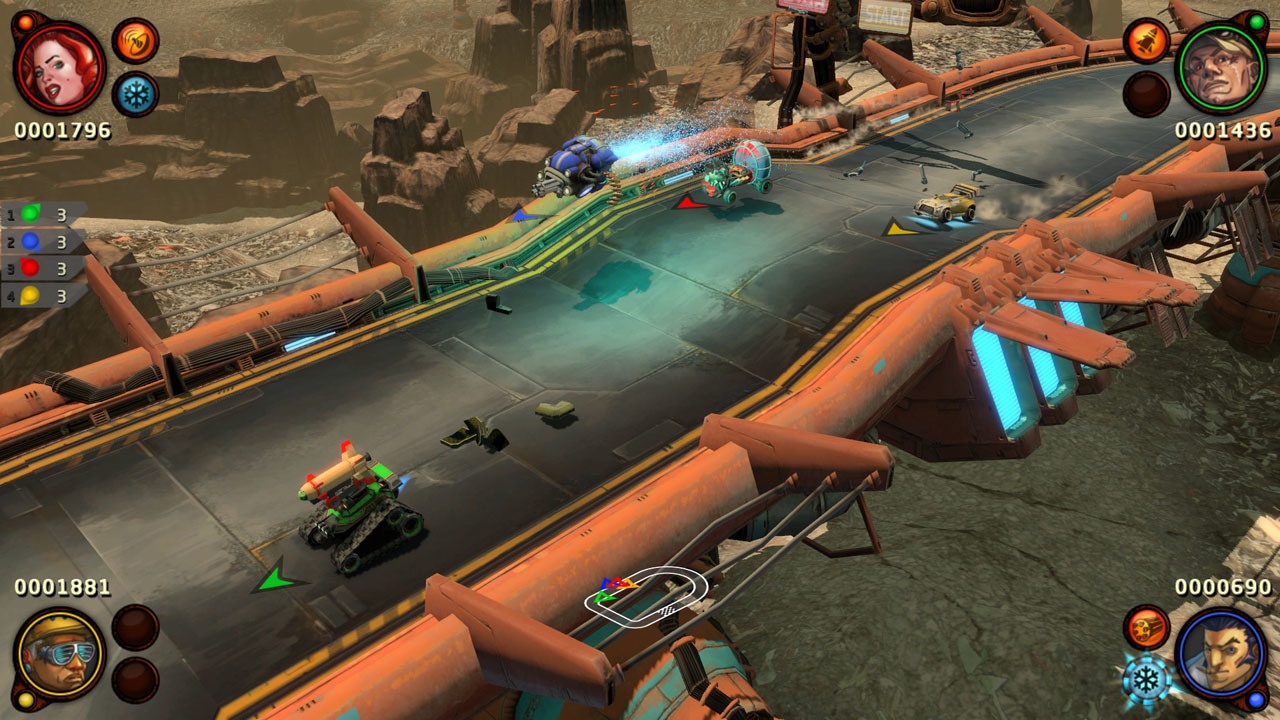 Sometimes after you play the likes of Fallout 4 and Bloodborne you want to sit down and play something that doesn’t require you to think so hard, something that relies on a simple mechanic that brings out the competitiveness out of you but is also brings some fun to the party. BlazeRush is one such game, a title that definitely does not need a lot of thought to get good at but BlazeRush is at its simplest from a game that is fun to play.

BlazeRush is can be described as a top/isometric down view arcade racing game where you need to survive the race itself. There is no health, there are no brakes and no levelling up your vehicles. You race across several tracks covering various settings. There are weapons and power ups that help you either to get ahead or to stay ahead of the competition. There are various modes to race with as you try to collect cups that allow you to unlock additional tracks. It sort of reminds you of Micromachines. 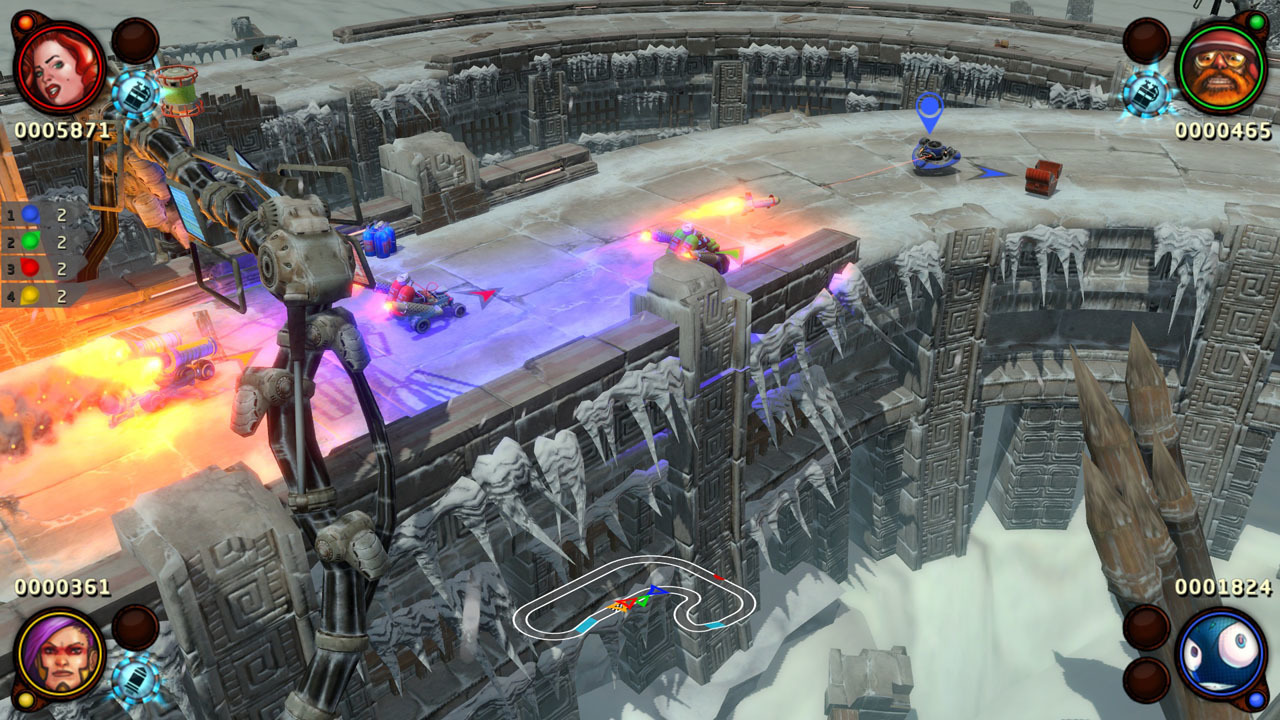 The career mode in BlazeRush is quite varied in terms of challenges that vary from simple win the race mechanics to time trials and death races where you need to keep out-of-the-way of a giant spiked steamroller. Unfortunately the tracks are not very big and can be completed quite quickly. At the end of each race you receive cups, medals and points that unlock new characters/tracks. This makes BlazeRush a reasonably deep experience. BlazeRush has the feel of an old arcade game and you will find BlazeRush fairly challenging to play, it’s simple enough to get round, it doesn’t take too long to get good at it but it’s still challenging to get to grips with.

Graphically BlazeRush is simple on the eye. The tracks are quite simplistic with the odd ramp thrown in whilst the backgrounds are nothing to get excited about. The cars are easily identifiable and also quite easy to control taking into account their different speeds, masses and handling. BlazeRush is quite a colourful game but it’s quite easy to identify power ups on track and with all the explosions that can happen it does a good job of keeping the screen clear of too much. 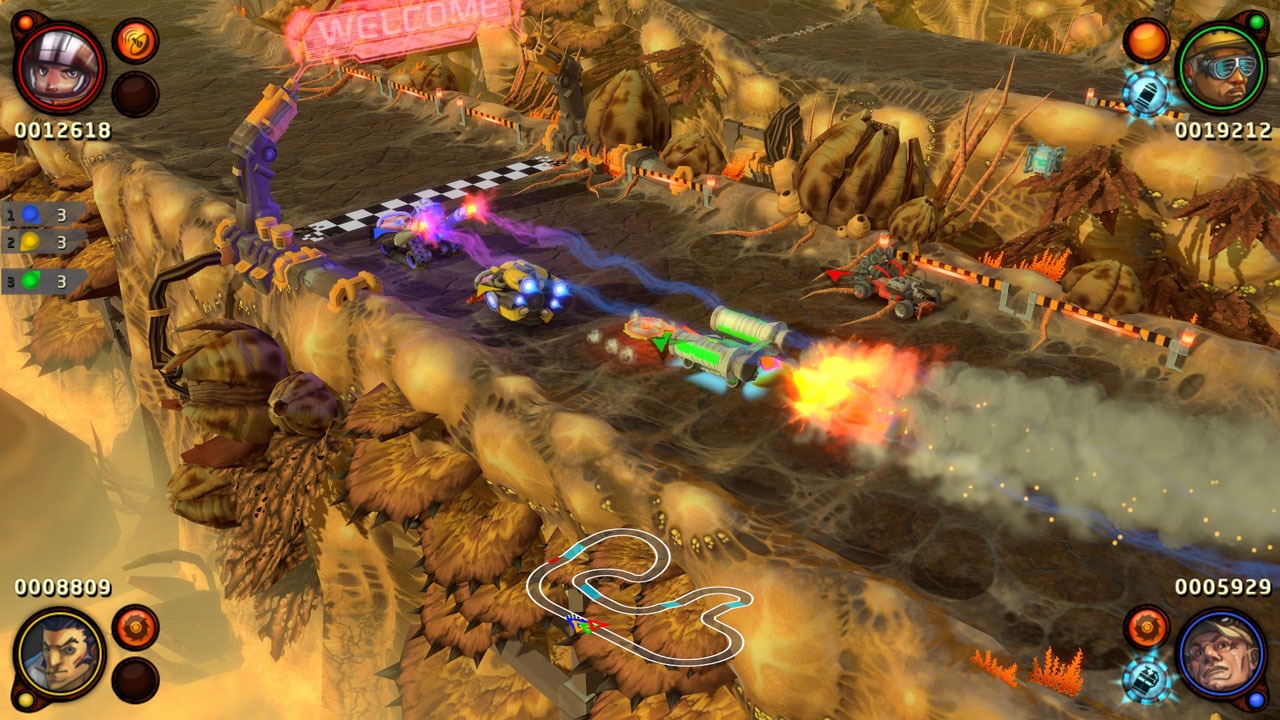 There’s just a couple of issues with BlazeRush that let it down a tad. The tracks are not that plentiful which is a shame considering how simple a game it is. The way BlazeRush pans out if someone falls behind or goes really far ahead can come across quite frustrating at times, as it zooms out it becomes harder to navigate around the tracks. Some of the weapons can either be a help or a hindrance, bear in mind they should mostly be a help. For example , it is possible to be hit by a missile yet the thrust of the rocket manages to push you to the front of the race with no apparent damage to your race prospects.

BlazeRush is at its best when played with human company. The differing cars do add variety to the tactics you can employ, if your car is one of the slower vehicles then you can take advantage of the weapons on offer by playing a more tactical game relying on your sharpshooting skills. If you pick a car with great acceleration be aware that some tracks are better for that skill set compared to others, you wouldn’t really want to choose a car with poor handling on a track which contains several ‘gaps’!

BlazeRush is a fun game with a limited solo campaign. If you can get a few friends round or find them online then there is a lot of entertainment to be had but its let down by a lack of tracks in terms of number and length. If you enjoyed the old top down racer days or want something to break up the monotony of action adventure games then BlazeRush is certainly worth taking round the track at least once or twice or thr….