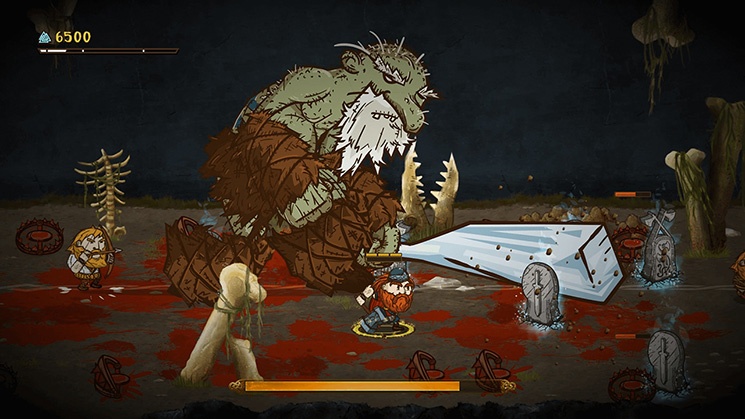 There’s something to be said for ultra aggressive marketing. It was incredibly popular in the late 90s, and, had such things not been done to death, we wouldn’t have the energy drink plethora that currently plagues the young and old today (so maybe not a good thing?). But basically putting the customer on the defensive about something, be it their dedication, strength or goals, makes them more inclined to react and prove their worth. In this aspect, the crazy, bloody title Die for Valhalla! makes some good headway, and, thankfully, there’s also a lot of fun gameplay mixed in.

Die for Valhalla! puts you (and possibly your friends) in the position of fledgling Valkyries, Norse spirit women who inspire and thrive from battle. As it turns out, however, you’re a Valkyrie without a name, which is very important for spirits and such. So you set out to prove your worth and happen upon another nameless and shapeless spirit, who happens to need your help, and definitely is not going to double cross you at some point. Thus the Valkyrie sets out, several quests in hand, to earn honor, gain a name and generally help out the Viking populous, who seem to always be fighting.

At first glance, Die for Valhalla! is a straightforward 2D brawler with one big exception: the possession mechanic. Valkyries can fight their own fights, cool, but they’re honestly slow, a bit weak at first, and, when they die, they’re dead and you’re screwed. Luckily, you have the ability to take possession of certain things, from inanimate objects (occasionally useful) to, most importantly, recently deceased Vikings. The Valkyrie need only stand atop the grave of one fallen hero (who conveniently was buried under a tombstone that bore the weapon they used in life) and resurrect them to fight for the glory of Valhalla. Once alive, the newly animate Viking can use combinations of common and special attacks, blocks, ducking and dashing, and a charged up super hit that usually clears the room of smaller foes and any/all destructible items. If you want to change Vikings (or yours dies) no problem, there are tombstones everywhere and plenty more zombies to get going. You can even just kill the one you’re currently using to grab another! The system works! 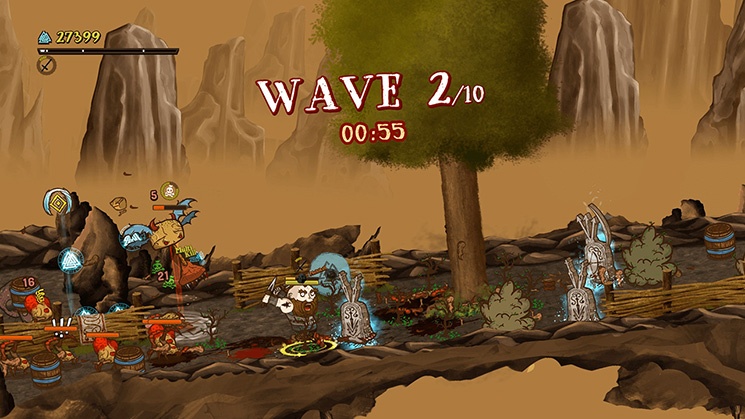 In the core mechanics of the fight, the button mashing joy of Die for Valhalla! is significantly easier than that of the closest game I compare it to, Wulverblade. This is both a good and bad thing, because I loved Wulverblade to death. But Valhalla chooses to askew more difficult and complex attacks in favor of simple brutality, and it works for what the game is attempting to do. Even though it boasts roguelike elements and a bit of an RPG mixture, most of the game is strategized button mashing, and it does this with pizzazz and gusto. Players will love being nimble on their toes to work out arial strikes, dashing evades and when the time is right for a Viking style headbutt. It’s all something that you mostly work out on your end by the conclusion of the first stage, but Die for Valhalla! isn’t done with you yet.

That’s because new enemies are introduced nearly every stage moving forward. Starting small with scorpions and sword-swingers, you move up to archers, spearmen, berserkers, trap setters, scorpions and so much more. You’ll run into elite versions of some of the simpler enemies who are bigger, stronger, faster and have elemental damage. Do you know what it’s like to see a skittering horde of flaming scorpions running towards you, trails of flame in their wake? It’s crazy cool and mildly horrifying. When you reach the first boss, which takes up the entire goddamn screen, you’ll quietly swear under your breath, not least of all because it immediately stomps a bunch of helper Vikings to death with little to no preamble.

But you’re going to progress just as the game improves the difficulty. Die for Valhalla! has this amazing experience point leveling system that I adore and have never really seen before. Each time you get enough XP, you get to choose two things. First, you add a new skill, which goes from purely mechanical (an extra fifty defense points) to something that’s really flexible (regain health with every killed enemy, damage everyone when you blow up your Viking, etc.). This in and of itself is a nice addition and would have been enough to help shift the tides. But we go a step further and move into this runic map that you get (usually) seven connected spots to light up. These lit runes will then add to your base stats based on which runes you choose, focusing on strength, defense, HP and spirit. You basically need to plan out a puzzle strategy in order to level up to your fullest extent, and there’s no undo. If you move to the left rune instead of the right, you might corner yourself and burn your extra two turns because you make bad decisions. It’s really interesting and, more often than not, you end up being able to shape the Valkyrie exactly the way you want.

Lastly in the positive spots, the multiplayer. Multiplayer in Die for Valhalla! is absolute mayhem in one of the best ways. You’re all Valkyries of different colors, there’s usually enough Vikings to possess (but not always!) and you want to get all that sweet sweet glory for yourself. You end up spawning in and out of bodies at a rapid pace, sometimes possessing bear traps to attack your friends instead of foes (you know, because you’re that jerk) and waiting in the wings for your friend to die so you can possess his/her fallen Viking. It’s like a more cooperative version of Crawl with less pixel art, more combat and a generally lighter tone. The difficulty only scales a bit with more players involved, so definitely get three other people in on this if you want to experience the brutality of a true Viking slaughter. 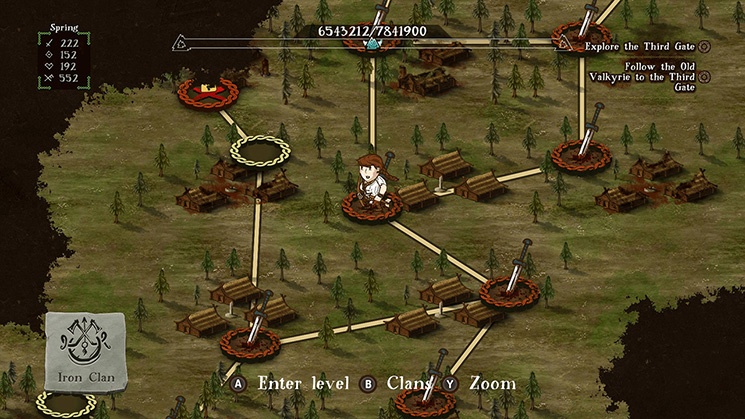 The only weak points for the game are ones that are a bit superficial, but I will just comment that the simplistic combat is a double edged sword. Up top, I said that it makes the game easy to get into and enjoy, and that’s true, but it can also make things slog at times. That giant troll I faced seemed scary until I realized that you dash in, hit him, dash out, wait for him to swing, dash in again, repeat. If you’re soloing the game at this point, this battle is the first of several moments where the combat unexpectedly makes the fun a bit duller and you just gotta get through it. Most of the fights are good, but there are definitely “lesser than” moments.

Additionally, Die for Valhalla! is decidedly more cartoony and silly, with heads rolling away like they were loose watermelons and the Vikings actually doing skits between the load screens. Now, as an independent situation, Die for Valhalla! has more than enough of its own merit to hold attention and be fun, and shouldn’t be an issue for anyone who enjoys a good, mindless brawler. But there were times when it felt slightly out-of-place, like we had several cutscenes of informational plot and then suddenly a weird Electric Company type cutaway. It caught me off guard at moments.

But between a decent sized “normal game” and a lot of fun and chaos in the hard “roguelike” setting, Die for Valhalla! has everything that the brawling fan could want in terms of a new game. Plenty of multiplayer incentive, really interesting game mechanics and an engaging upgrade system to actually diversify the game play. Whether you brutalize through things as a berserker or take your time arching from afar, you will certainly make Odin proud.