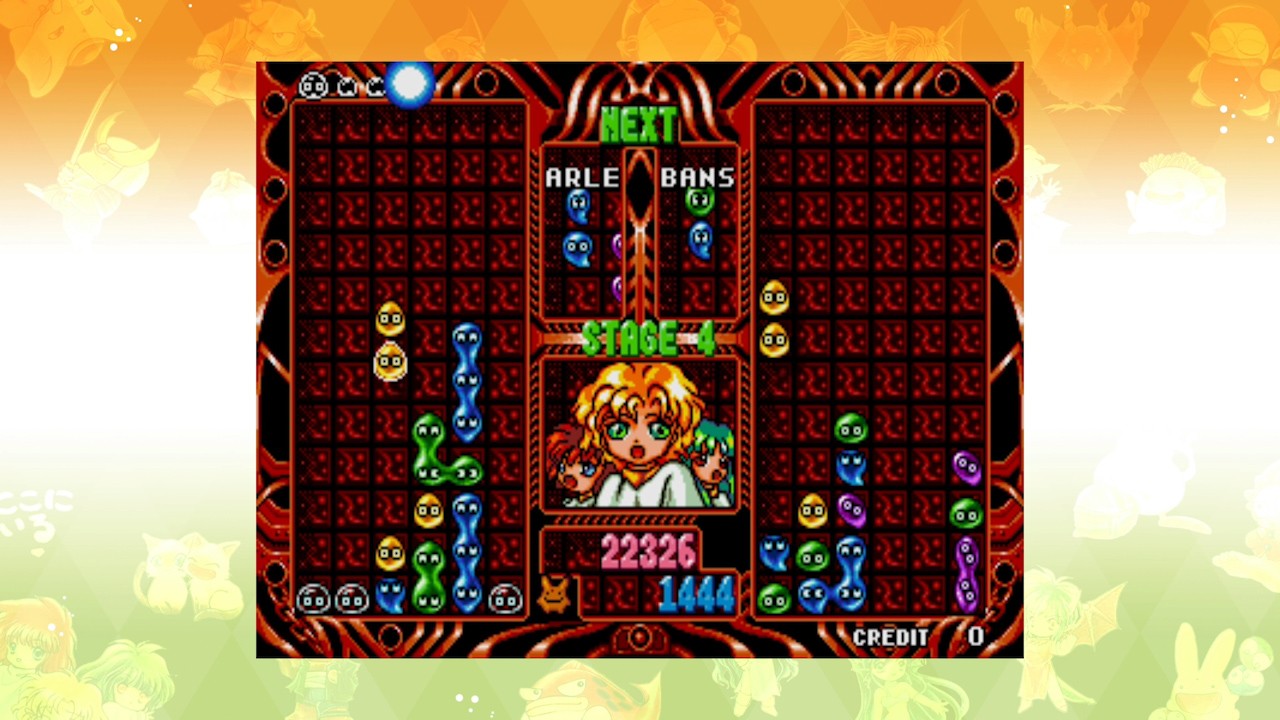 What else is there to write about Puyo Puyo 2 that hasn’t been covered before? Without a doubt, this is one of the best puzzle games around and for anyone who is a fan of Tetris or Columns will enjoy this version – Sega Ages: Puyo Puyo 2.

As you’re no doubt familiar with them by now, M2 has re-released some excellent Sega classics on the Nintendo eShop ranging from Sega Ages: Virtua Racing, to Sega Ages: Sonic the Hedgehog 2. They all follow the same formula of having a few more features than the average game. So far all the Sega Ages releases feature an online manual which is always a highlight for us older gamers and retro collectors alike. I wasn’t too fussed about the manual on this occasion, as my first experience of Puyo Puyo 2 was on the Sega Mega Drive in Japan and I didn’t need it the first time.

Surprisingly, everything was written in Japanese with the same for the voice talent. Except for a few universal words, I had no idea if there was a story interwoven in the gameplay. It didn’t matter as Puyo Puyo 2 is strictly about the puzzle aspect of the game – any visual novel element felt irrelevant. Well, Sega Ages: Puyo Puyo 2 keeps as close to the original once more, and the dialogue is in Japanese. I could read and understand a little of it, but to be honest, I skimmed over it: Puyo Puyo 2 is about getting one over your opponent before they get you. 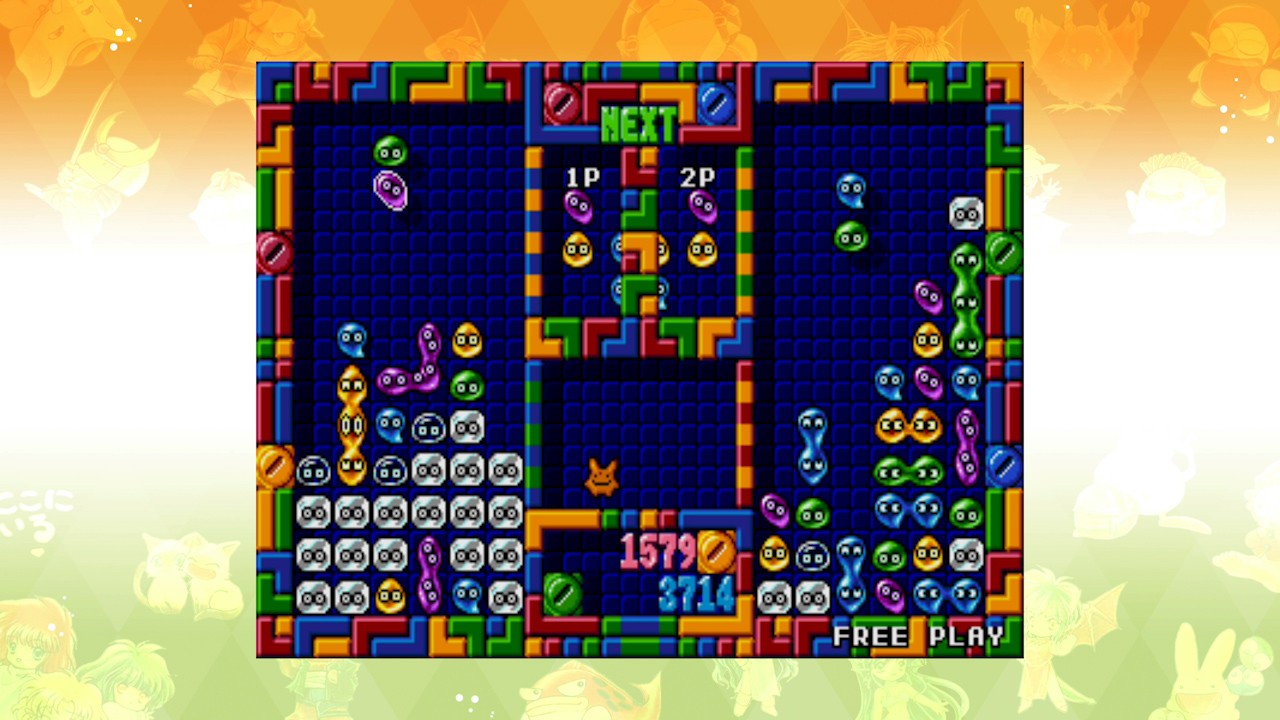 If you’re unfamiliar with the series, the screen is split vertically with your playing area on the left; your opponent is then on the right. Blobs will fall from the top of the screen called a puyo, and they come in a variety of colours, sometimes the same colour and made up of two puyos per block. The aim is to connect four or more of the same colour, either in straight lines or blocks. This will give you some points and send a batch of glass-like puyos onto your opponent’s screen, blocking them from making up a combo of their own. If they counter this with their combo, they’ll get bonus points and in some cases, return these glass puyos to your screen. If your pile of puyos reaches the top of the screen, it’s game over. You’ll want to maximise your combos to sabotage the other player’s efforts, filling their screen with dud puyos.

For a simple concept, you can go for several strategies. Sometimes you can line up your colours as fast as you can to keep your rows of puyos near the bottom of the screen, also to hold back the other player with glass puyos. These types of puyos will disappear if you complete a combo on top, so there’s still a way out, but always challenging nevertheless. My preferred strategy is the long game where you stack up puyos either side of the screen in groups of three, ensuring that you don’t trigger off a combo. It’s a risky technique, but you can find that you’ll link up more puyos as the rows drop, unleashing massive combos. On a few occasions, I’ve destroyed the other player with a one combo chain. However, Puyo Puyo 2 isn’t as easy as I remember. Playing the first AI character was a walk in the park, but the second, random player, destroyed me with a flurry of combos. This happened a few times, and it became clear that the difficulty spikes.

Other than the main game, Sega Ages Puyo Puyo 2 has a decent amount of features for die-hard players up for a challenge and compete with players online. For those not following the story (unless your Japanese is good enough), there’s a character biography section that lists all the players with a write up in English. You could put two and two together, but this inconsistency with the language may irritate a few if you buy into the plot. It’s certainly not game-breaking as Puyo Puyo 2 is a classic, made all the more worthwhile playing with a friend locally or online. I wasn’t able to get an audience for the online play, no doubt to my anti-social working hours, but I’m sure I wouldn’t have enjoyed it anyway. There’s been a fair share of beaten scenarios on these Sega Ages online features and I’m too proud to be beaten by someone who may have only played it for an hour or so. Again, a simple concept, but massively competitive when you go up against a similar levelled real-world player. 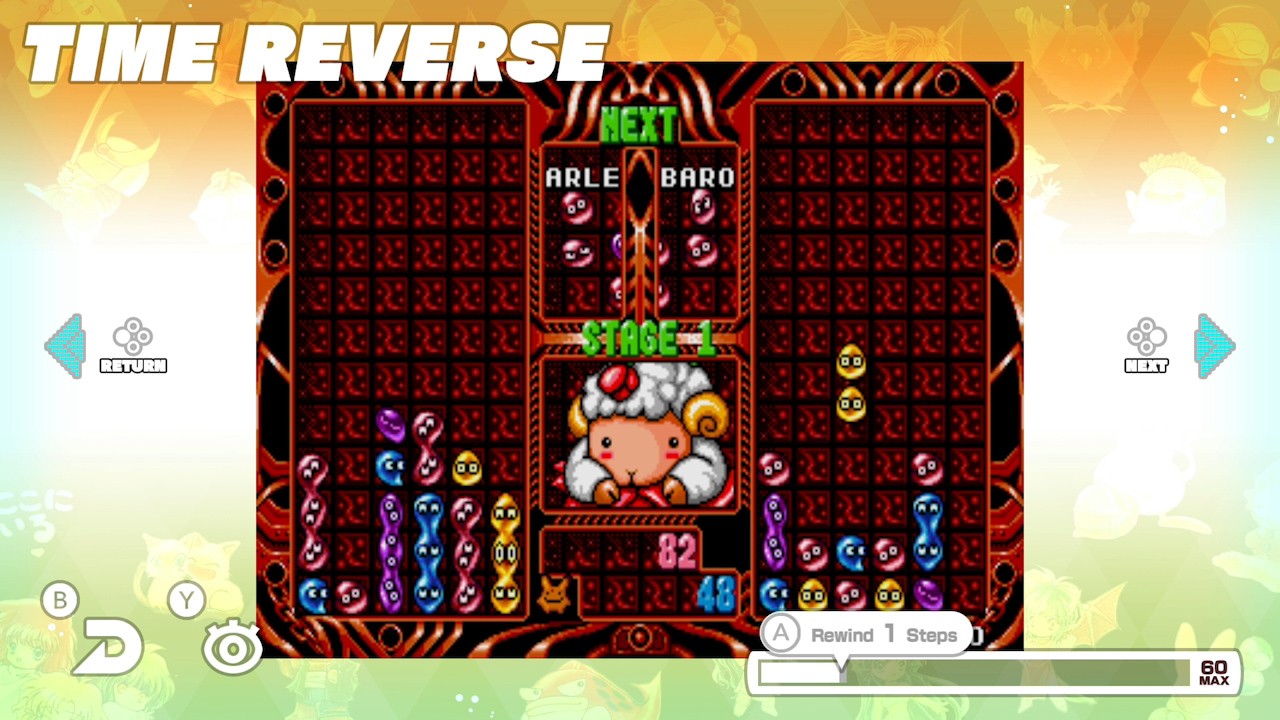 When it comes to game modes, we have the classic arcade game where you play as Arle and work your way up a tower of random enemies. An exciting addition to this mode is the Time Reverse feature. If you opt for this, you can rewind time to a better an opening against your opponent. Of course, it doesn’t work when playing against other players, but it’s a fun addition – as if you have your own Action Replay/Game Genie connected. Endurance mode has the same feature and is essentially a survival game and is tough as old boots, VS mode is self-explanatory as is the online match, then you have the ranking function. Like the other Sega Ages titles, you can compete against fellow humans for the highest score. On first perusal, the scores look like the players have cheated but you each one has replay video you can watch to fine-tune your skills. This worked great in Sega Ages: Virtua Racing and Sega Ages: Sonic the Hedgehog 2 but I think other than learning a strategy that other players adopt, each game is unique, so you’re unlikely to be able to replicate the same score.

There are also some video tips on how to play the game, which is very welcome. Here you can learn the ‘secrets’ of puyo chains, offsetting and quick turns. M2 have seemingly made Sega Ages: Puyo Puyo 2 accessible for a wider audience and offer a bit more longevity what with all the challenges. Arguably, Puyo Puyo Tetris is a little more polished and has a greater selection of game modes including ‘fever’, but considering the age of this title, it still holds up well and recommended to any block falling type games. Whatever the genre is labelling itself as.

Not just for retro fans, but those who want a good challenge – be it online or with local play. The Japanese dialogue may annoy a few, but it’s authentic to the game and when I originally played it, didn’t have the luxury of menus in English. Worth a look for puzzle fans.