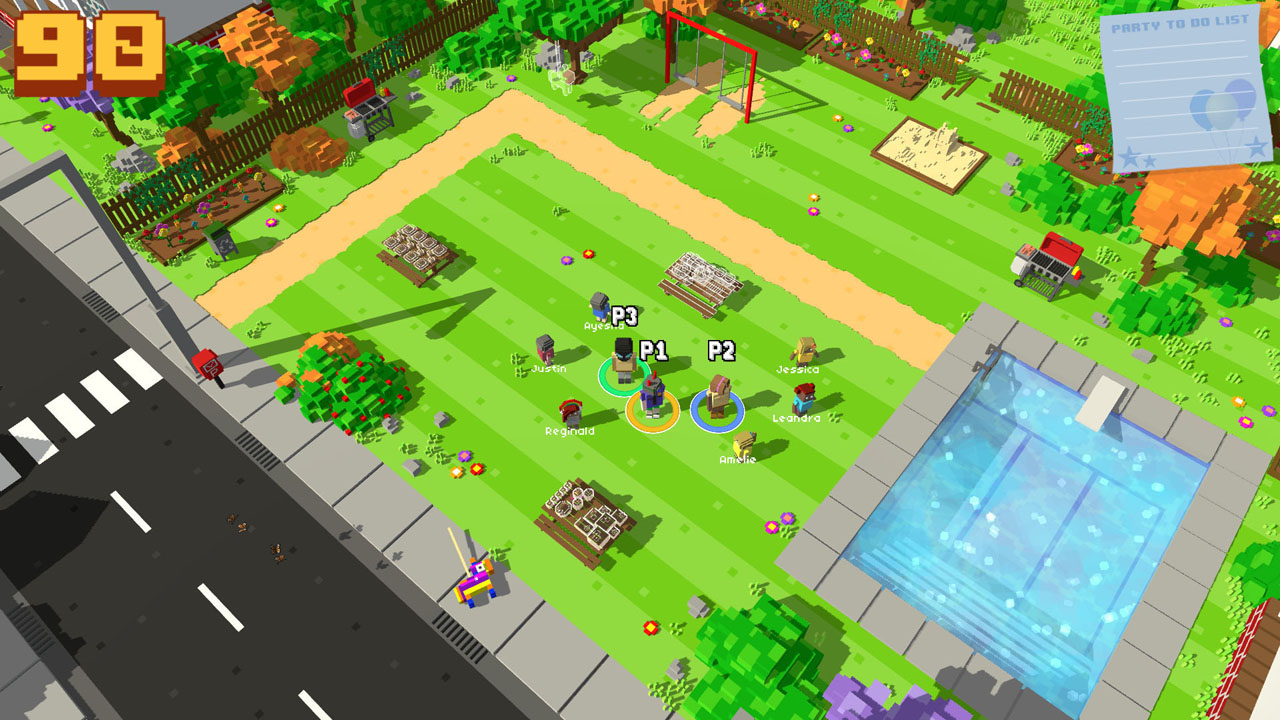 Kids, am I right? I mean, they exist, don’t they? Basically, there are kids everywhere, and, more importantly, there are people with opinions about kids everywhere. From those overbearing relatives who demand you pop out at least four to the uncomfortably hate-filled “child free” chick in accounting, it’s silly how there are so many diverse approaches to “continuing the species so we don’t die out.” Of course, there’s a whole different argument to be made here about the amount of people in the world and the number of neglected children, but this is a video game review website, not a weird Mother Jones EdOp. Still, everyone can agree on one thing: children make tons of poor decisions early on. Whether they’re curious or some are genuinely stupid, we may never know, but kids are always finding themselves in danger. And it’s this hyperbolized idea that makes up the backbone of the time management/survival simulator Think of the Children.

Think of the Children works best as a party game, but there is technically a story mode that you can follow if you wish. It begins with you standing before a judge, being charged with gross, gross child negligence, something like more than 400 counts, and things sort of not looking so good. What happens next is a dramatic retelling of what happened to the kids during the last few days, with trips to places like the park, the beach and the shopping mall, to name a few. In the course of these events, the prosecution and the defense are both carefully looking at what transpired when you (and possibly your fellow parents) were trying to provide a fun, exciting experience for the children while, simultaneously, trying to keep them alive. What the courts ultimately decide based on your live-action testimony will alter your future of being a free parent, a convicted felon, or just another mom/dad/horse trying to do their best. 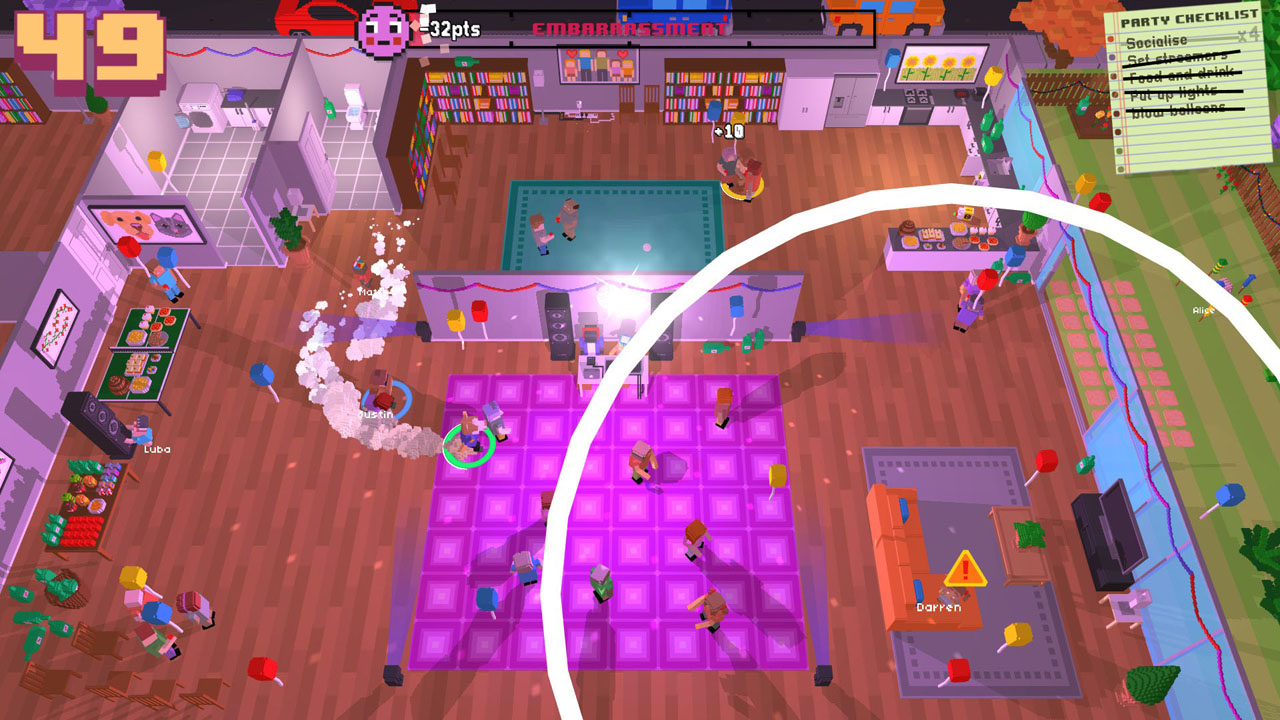 The core gameplay of Think of the Children is a supposedly simple one: keep the kids out of trouble while also providing them with a good day overall. Your main tasks are to do what every parent is expected to provide during a normal outing: flip some hamburgers, set up some toys, maybe grab ice cream if everyone’s good or make sure everyone’s following the rules when going through airport security. However, the secondary task of “keep children alive” is something that’s even of greater consequence. You see, children have a knack for finding ways to hurt/maim/kill themselves in ways that adults wouldn’t normally consider. So letting the kids play near the pool unsupervised is a no-no, but children will still find a way to wander over there even if you tell them not to. It only takes one good poke for a giant tower of carefully stacked canned goods to come crashing down and bludgeoning a child into a fine gravy. And did I mention that kids seem especially delicious to seagulls when left to their own devices for too long? Yea, I didn’t think that was a problem either, but the game has told me otherwise.

Thankfully, the controls of Think of the Children provide some relief and help to the parents in training. You have your normal actions: running and yelling, but you can only yell so much before kids stop listening/you get hoarse. Your biggest skill is being able to pick up a child, physically, from whatever they’re currently doing. So whether they’re seconds away from being abducted by a van-driving creep, actively being circled by a shark or dangerously close to a school of blowfish, you can run/swim over and swoop them out of harm’s way, and, on dry land, you can then hurl them far away from the danger. You have to be careful, though: you don’t want to get them out of the frying pan and into the fire, or, in this case, into the road where a speeding car is coming.

I’m not sure if the game’s intention was as such, but Think of the Children really lets you know that single parenting is a goddamn nightmare, ridiculously difficult and impossible to “score” as well as having two or more parents. Attempting this game as a solo caretaker is an insurmountable task, and I cannot imagine being able to keep all six kids alive when you’re doing things alone. You have to ultimately decide what is going to be a better score for you: five alive and mostly bored children, or one living but totally fufilled kid. There’s simply no way to make sure that everything stays standing, things aren’t on fire, and every single child remains living. Especially when there are what I like to think of as “cheap kills” that crop up in every stage. Usually, you see a warning triangle above an endangered child’s head that will flash for a few seconds before doom (coconut, jellyfish, a bad landing off the sofa) takes effect. However, the cheap kills not only seem to strike in a millisecond, they can also take out multiple kids at once. Starting with cars that come barreling down the street, evolving into uncaring speedboats and getting worse, these are simply the critical failure rolls that you get that break your game. My advice for single players: just focus on keeping them alive. The modifiers give you better points for living kids than happy kids. 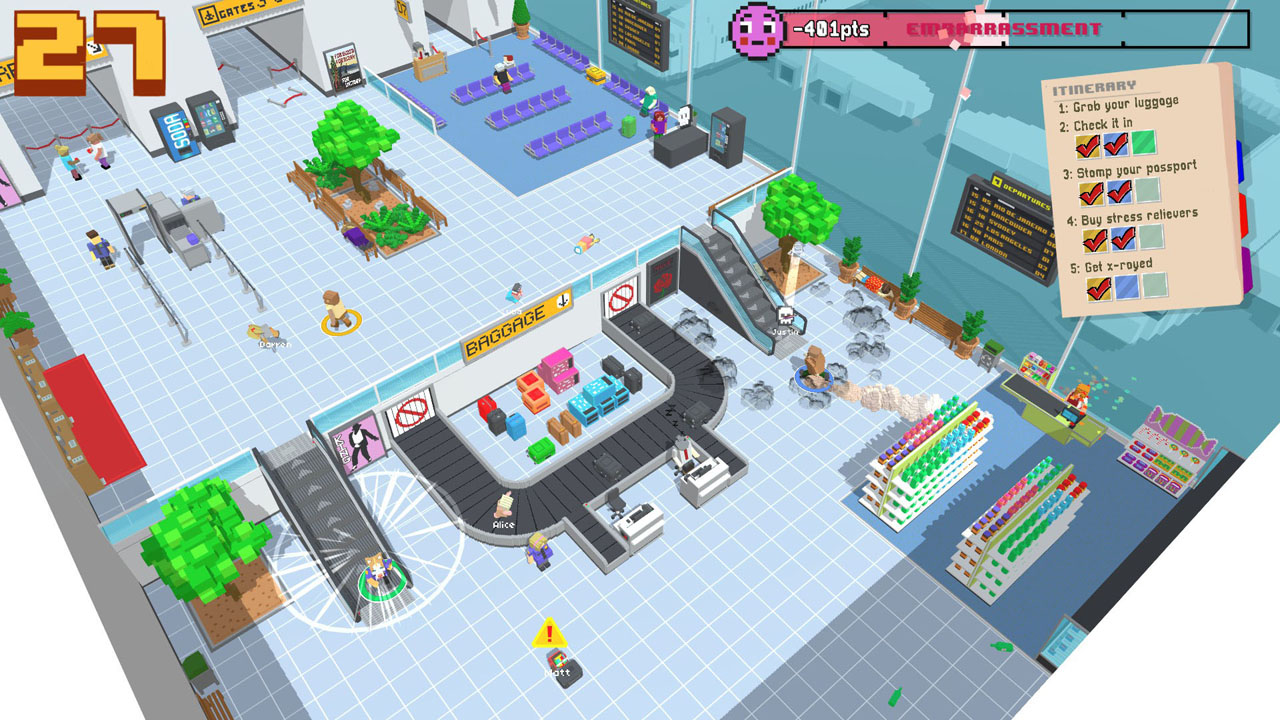 Now, if you’re coming at the game from a multiplayer aspect, even just one other, things get a bit easier, but are still incredibly frantic. Everyone ends up yelling to each other over who is going to save who, and you have a real chance to improve your odds and make a high-grade for each level. Make sure you have one person specifically doing the rechargeable events: barbeques will always need to be flipped, and grandpa will always need more lotion. Have a parent identify the cheap kill and huge danger areas and just hang out there: there’s plenty of outlying danger, but those usually give you a bit of time before someone dies. Your best bet is three or more parents, but even two is such a relief in comparison to single player. Best of all, two players greatly increases your chance to get a good grade at the end, resulting in more unlocked gear and customizable children and parents when the day comes to an end.

Right, aesthetics. Think of the Children comes at you in a sufficiently chunky, large pixel style that helps add to the absurdist nature of the game and the premise. The dialogue that happens between levels in the story mode from the judge and the lawyers is fairly entertaining, and the more blocky creations make the horror that gets inflicted on the children a lot easier to deal with (as high def might make people fairly aghast at the outcomes for everyone). You have the option, from the very beginning, to customize parents and kids, and I would recommend doing this if you plan to invest any real amount of time into the game. By creating some unique looks for you and your brood, it becomes easier to not only recognize them, but also to recognize yourself. You learn the names of the kids at the end of the day, but why not give them names beforehand to better set them apart? Now they really are like your own creations, and now there’s actual investment in their survival beyond a high score! Not to mention being able to scream “COREY! GET THE HELL AWAY FROM THOSE KNIVES!” without being in real danger makes the whole thing worthwhile.

Think of the Children is an excellent, challenging and utterly disturbing (in a funny way) multiplayer, cooperative experience. There’s a ton of fun to be had, some insanely terrible ways for kids to die, and a pleasantly surprising number of levels. This is one of those great “bring this game to a friend’s house” kind of titles that deserves portability and a decent way to play with a good group of people. Sadly, as a solo player, it definitely doesn’t have as much staying power for my longterm interest simply because it’s way frigging hard to parent alone. So don’t overlook this title, but make sure you have at least one other person in tow before you look at them and say, with a squeeze to the hand, “I think I’m ready for children.” Also, give no context before saying this. It’ll work out, cross my heart.

Think of the Children Review

Finally, a way to prove to your parents you’ll be a better mom or dad then they EVER WERE.