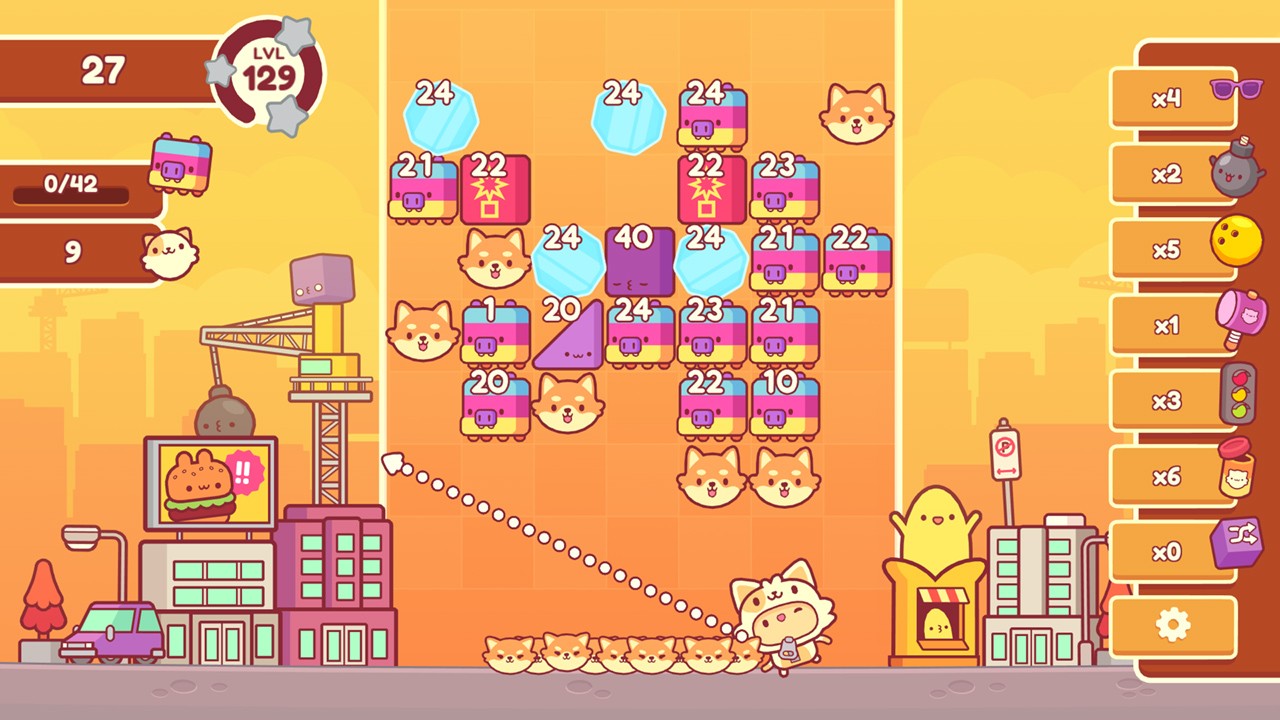 Piffle is like grabbing a family-sized bar of chocolate to pace yourself, but you end up demolishing it, then feeling a little sick afterwards. A super addictive puzzle game, Piffle’s queasy aftertaste is more to do with the cuteness of it all, but some seriously fun gameplay dilutes that.

Piffle is a game that is marketed towards kids and kawaii ‘movement’ followers with the simple, yet bold, art style, the abundance of cute lil’ cats and throwing them at blocks. The latter was the draw for me, as throwing a cat at a wall and not being condemned by the internet was appealing. But joking aside, this is the kind of title that will hook a younger audience on presentation alone, and a must-have app on their phone.

Well, this is on the Switch, and it’s equally suited here. My preference when playing the Switch is in handheld mode as it’s convenient to play through a title on the fly, coming back to it periodically throughout the days or week. With Piffle, I binged on it in two sittings. If it weren’t for the undefeatable glare from the missus that dinner was ready, I’d have played through the night. Just one more game, only one more game… 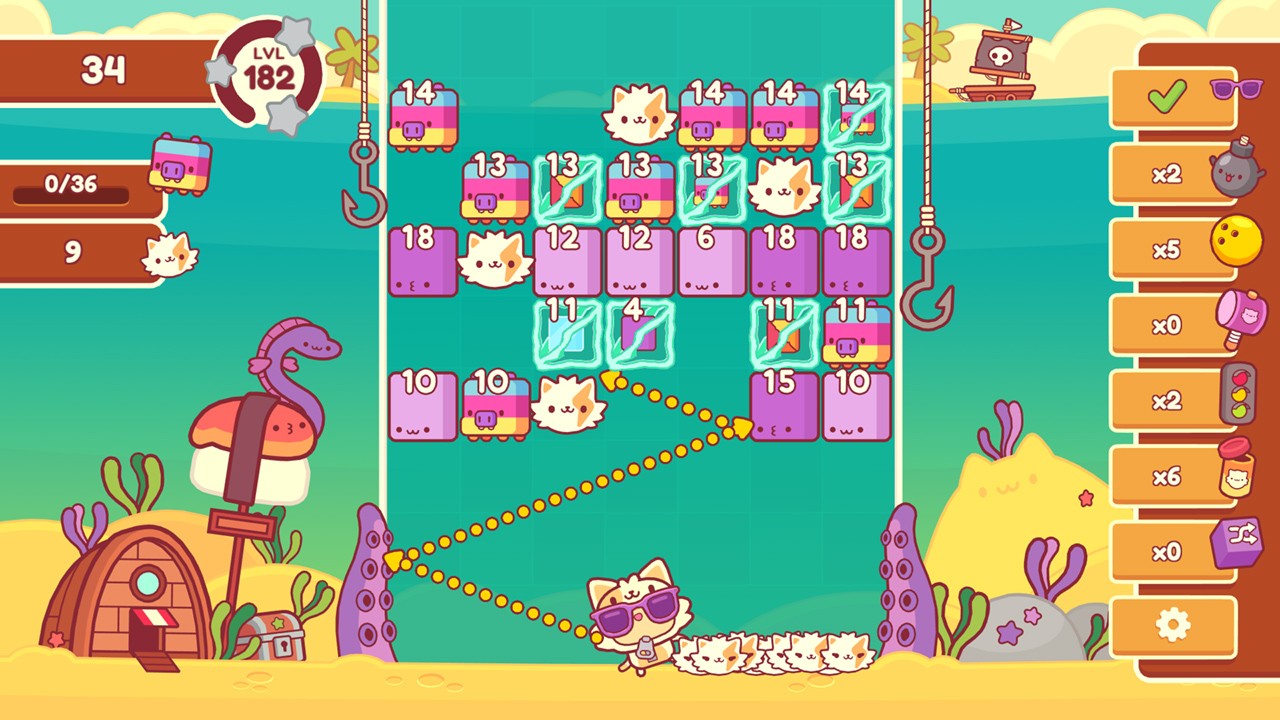 It’s a simple concept, and anyone who’s played the likes of Super Pang, Arkanoid, or a variation of it, will be familiar with the mechanics. You’re armed with cat balls – that is, cats that are balls, and you have to throw them at the blocks above before they drop to the bottom of the screen and kill you. Throwing these balls is incredibly easy to do as you just press a button. The key is the trajectory as you need to calculate where they will rebound as you’ll want to get as many hits as possible until the cats return to the ground. Throws are unlimited, but with each turn, the blocks drop one level, making it a little more intense.

You could, of course, wing it and throw them in the hope they will hit something, but each block has a hit counter that depletes until destruction. To begin with, you only have to get a couple of rebounds, and they disappear. Still, the numbers slowly creep up, and you have to utilise each shot, such as getting the balls to rebound to the top of the rows and repeatedly bounce, getting as many hits in as possible. Throughout the stages are additional balls to collect – by throwing that direction, you pick up another that adds to your legion of cats. In one throw you can have 20+ balls follow one another in quick succession.

While it’s possible to get through the game with skill, there are power-ups along the way that will help. One power-up is a pair of sunglasses that predict the ‘flight path’ of a throw, while another one would be a bomb that instantly destroys anything in its path. In-game there are a few bonuses such as buffing your balls with electricity (great line). Still, for the more useful items, you have to buy them using the currency you earn in the game. Alternatively, if you collect all the three available stars per stage, you unlock a chest of goodies after earning so much. 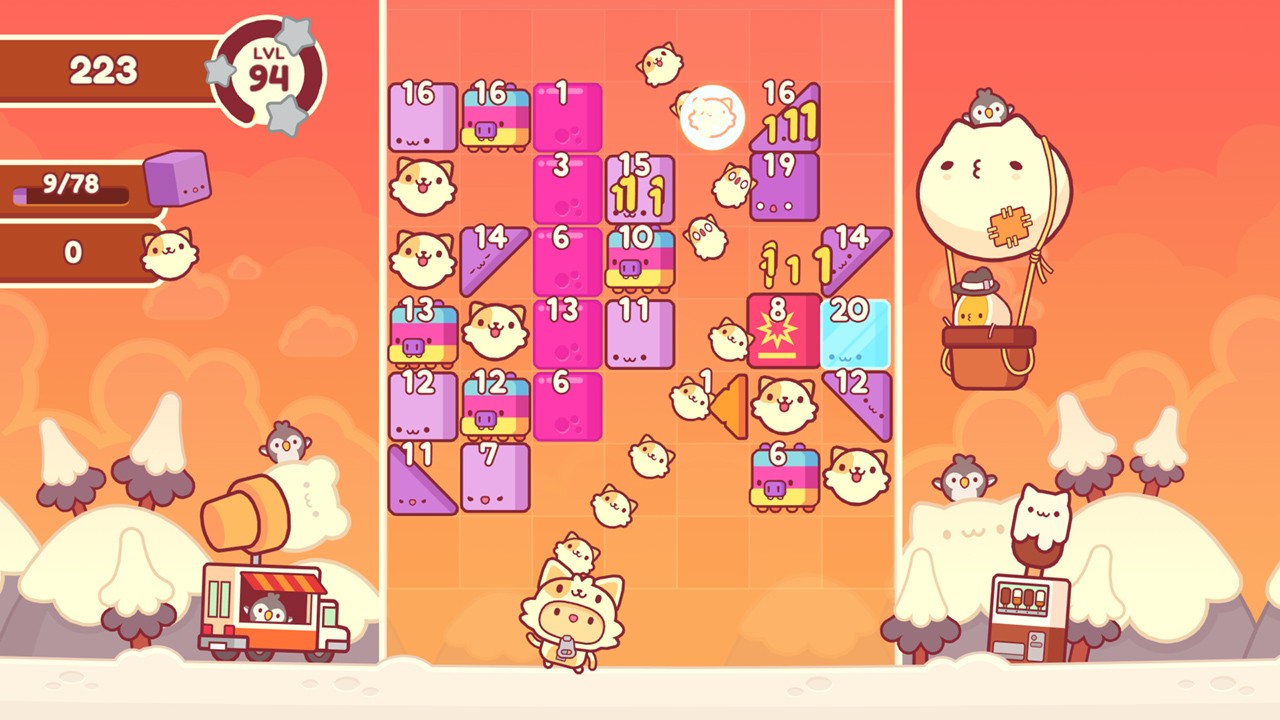 In truth, Piffle is pretty easy, but that’s not the reason for continually playing it – it’s addictive through the simplicity and steady introduction of new blocks with various powers. Considering the audience, you’ll be pleased to know that aside from power-ups, there is cosmetic customisation to make things like pirate cats. As a slave to customisation, it was an excellent addition. Still, Piffle never has you wanting for a change of scenery or to change the appearance up as it’s continually changing. Be it the new blocks or simply the background, the game, while fundamentally the same, feels like it’s progressing with you.

Of course, it’s very repetitive, but if you enjoy the game in the first few stages, then you’ll stick with it. The game is promoted a little as a chill game, and while I wasn’t frustrated once in the whole time playing the game, it gets a bit hectic in places and from my perspective, I needed a break from the cuteness. The music too. While you can mute it, that’s not something I wanted to do, but the repetitive tempo of Everything Is Awesome didn’t feel too ironic, and it grated on me a little. Emphasis on little, as I mostly ignored it. It’s not terrible; it’s just a preference thing.

Finishing the game in one sitting is doable, but I’d recommend playing in moderation and pacing yourself. The levels are pretty quick and in truth, don’t warrant immediate replay value, though I do expect to come back to Piffle periodically as it really is enjoyable. If I were a mobile gamer, I’d go as far as saying that I’d buy this separately for my phone as it certainly passes the time and would put a smile on my face, as I’m sure it would for you too. Especially if you like cats.

Fast, enjoyable and terribly addictive, Piffle is highly recommended if you want a pickup and play title without having to learn moves, read about lore or get yourself frustrated with harsh mechanics.