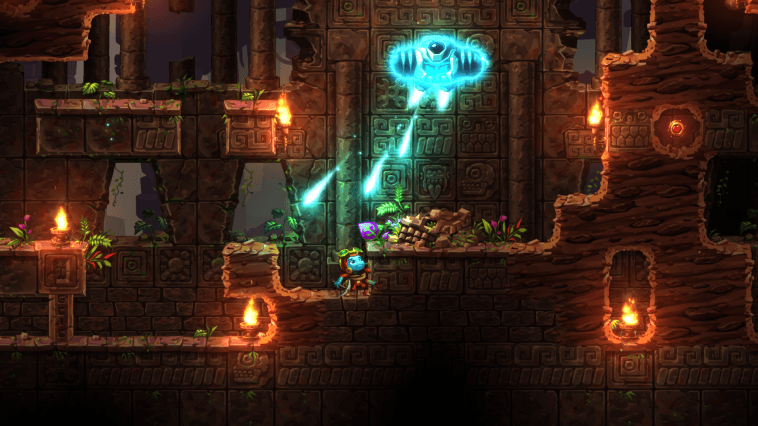 A sequel is always met with hope and trepidation. There’s nothing like yoking the success and spirits of a former game to a new one to really temper expectations and ideas. You either end up setting the bar too high, setting expectations too low, or generally just not giving a game a chance to shine on its own. When you see the fifteenth installment of Final Fantasy come down the pipeline, you can’t help but remember how everything after number six has kind of been lacking, and each iteration strays further from that classic story. Thankfully, none of this is the case in the wildly entertaining Steamworld Dig 2.

A quick history, for those who don’t know: Steamworld is an alt universe Earth where we got better technology early on, but then also suffered a great calamity that caused the world to stop moving forward sometime after the Wild West. The result is a division of classes, in which steampunk robots are the primary residents and ruling party, and humanity has devolved into a kind of subspecies that’s more pitied and feared than anything else. This is the fourth title in the Steamworld saga, but it’s not chronologically the latest. To pique your interest, this takes place between the events of the original Steamworld Dig and Steamworld Heist, which, some of you who’ve played both, are two very different settings (and two very different play styles). Without spoiling anything, Dig 2 is going to bridge the gap quite nicely.

Steamworld Dig 2 puts you in the shoes of Dorothy, who was one of the townsfolk that the first game’s protagonist, Rusty, interacted with. Rusty has gone missing after the conclusion of Steamworld Dig, and Dorothy has gone looking for him. Much as Rusty originally had gone looking for his father, the setup feels fairly similar, but who can blame the story teller? If this really is the Wild West, people literally used to just vanish on their way to the store and the natural reaction was “welp, guess they’re dead.” Dorothy is actually trying to do something about it, making her and Rusty two of the most unique frontier robots ever. Obviously a lot more is uncovered along the way, including answering some questions about mysterious earthquakes, potential disaster, and a journey to the stars 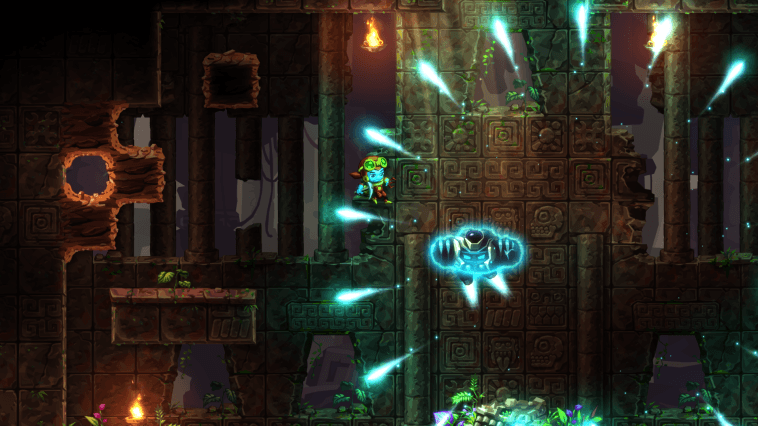 Gameplay wise, the approach is like a tunneling metrovania. Your primary function and idea in Steamworld Dig 2 is to tunnel down, hopefully not straight down, in order to uncover new areas, new secrets and, naturally, tons of mining gems. The gems get traded in for cash, which can then be used to upgrade your equipment. Dorothy starts off with just a pickaxe, but rapidly picks up a number of new abilities and tools, including my absolute favorite thing, the hookshot. All the tools you receive help you go deeper and explore in new ways, which turns the game into a fascinating bout of exploration, while also keeping abreast of the many enemies who make their home in the dirt and don’t take kindly to intruders. Oh, and, naturally, some insane cultists who may or may not be hellbent on world destruction. I mean, it can’t just be a straightforward rescue mission, now can it?

An awesome new change to the upgrade procedure are cogs, which can be found hidden throughout the game and, eventually, purchased. The cogs act as slot enhancements, with the option to swap them in and out at the workbench in town when you get a chance. For example, heading into a new area, you may want to put more cogs into your defensive sub abilities, so you can withstand fall damage and also accidentally stepping on acid/lava. Once you’re more familiar, though, maybe you’ll move those cogs into your bag to increase gem capacity and, in a pinch, let you destroy them on the road for a fraction of their value (but saving the hassle of trekking back to town). In theory, you could get enough cogs to fully light up your whole inventory, but I didn’t even come close to discovering all the cogs.

Speaking of discovery, Steamworld Dig 2 is much, MUCH bigger than the original. I’ve heard people clocking about 5-7 hours on the first game before coming to completion, and I can’t argue with that number. Steamworld Dig 2 is way more focused on the story and the journey, giving you easily twice the play, if not more. There are so many hidden areas that I found, and I’m positive I didn’t get them all. There’s backtracking, if you’re a completionist, and rewards aplenty for doing so. One hidden area unlocked blueprints for a challenge mode, something that was recommended for veterans of the game but not new players. There were plenty of logical moments when a secret area called out to me (hmmm, arbitrary soft spot on this otherwise impenetrable wall) , but others were by sheer luck and me pushing the wrong direction at the right time. I have no doubt that I could go back into my game now and find at least one or two places per area I’ve visited.

Since the game is a bit more balanced in terms of longevity and less “let’s just play till you explode,” Steamworld Dig 2 seems a bit more fair in terms of resources and feasibility for long haul treks. In the first game, it constantly felt like I was running out of fuel and water, often leaving me in the dark and almost completely defenseless, begging around for a small puddle to get myself going again. In Dig 2, I won’t say that water is plentiful, but there certainly seems to be a ton more just lying around, and the trips back to the surface when my lamp burned out were less treacherous. Plus, again, those cogs had the potential to really ease some of the growing pains. One upgrade made it so water orbs could drop if I shot bricks with my missiles, which just served to really fuel my jackhammer when I needed it. It’s a good give and take, but fans of punishment might be disappointed. 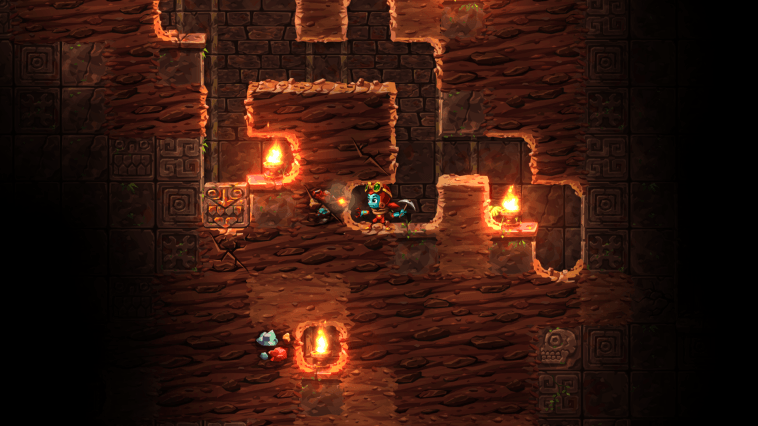 Graphically, this is a big step up for Steamworld Dig 2. It seems like they took the style and concept design that’s iconic in Steamworld and made it just a big heavier, with some good outlining to give the characters and the areas more definition. Things seemed like they have matured for Image & Form, giving rise to their series becoming even more involved and compelling. Rusty, as charming as he was/is, moved like his name implied and had some jankiness to how some things looked as he ventured onward. Dorothy is incredibly clean and fluid, by comparison, and she looks great throughout, even deep underground or accidentally dying in glowing liquid that I jumped into by mistake.

And I do love the soundtrack, don’t get me wrong. There’s some solid inspiration, a lot of piano work, and plenty of atmospheric creation that really helps you shift between being in the tunnels and up in the sun. But I never quite got the “Wild West” implication that I wanted. That’s one thing I can say that the original Steamworld Dig hit harder than the sequel is the soundtrack. Not trying to insult anyone, I simply liked the first one better.

Whew. I feel like there’s still more to say, but most of it would just be me telling you about all the stuff I found and everything that I want to spoil about the story, but that’s not why I’m here. Steamworld Dig 2 is a shining example of what happens when a sequel is done incredibly well. The result is compelling players to enjoy the first one only for the storyline but not necessarily for anything else, because I feel like Dig 2 does it better. It’s a Borderlands conundrum, where skipping straight to number 2 will do you best. And, for fans of Steamworld Heist, this is a great opportunity to have a different gameplay style and also see a bit how things ultimately got set up. If you enjoy games that will take your hours without a blink and you’ll simply grin through it all, Steamworld Dig 2 is an excellent Switch title, and I can’t recommend enough that you get this game as a portable title, so you can commence to diggin’ wherever you go.