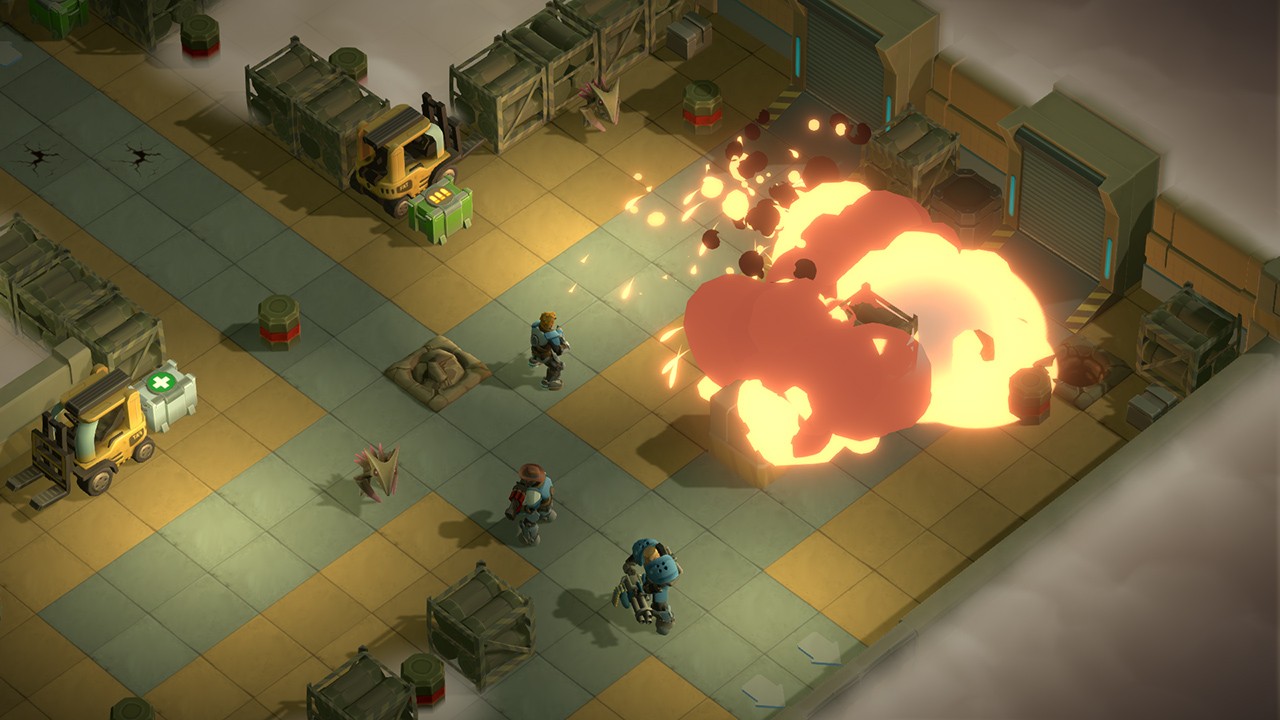 When I look at space themed, turn-based, strategy games, I always look at Xcom as the leading light. When you hear that a small indie developer has created a similar style game that is influenced by both Microprose and Firaxis games, then you start to get a little excited. The developers Tortuga team have created Spaceland, this strategy RPG has you working your way through numerous micro missions trying to solve the mystery of why a distress beacon attracted your attention and have you crash land on a strange planet.

The opening mission has you controlling a lone scout, from here you will be tasked with learning the basic mechanics of the game. You quickly learn how each action is denoted by a coloured square; orange for attack, blue for an interaction with an item, and white to move your selected character. It really is straightforward. For hardcore fans of the genre, this approach may be too simplistic, but with other unique elements to focus on, such as: ammo replenishment, and medi crates, there really is enough to test even the most battle hardened pro.

This indie title really does focus on quick gameplay. Each mission is designed to take no more than 10 to 15 minutes, which allows the casual gamer the opportunity to pick up and put down the action between other tasks, yet still feel like they are making some headway into the game. Having played the game for approximately 15 hours the influences of Laser Squad and early Xcom are plain to see. I’m an avid fan of both these games, so this was always going to be a winning combination.

The developers purposefully drive the player to focus on combat and action by minimising the amount of cover that can be utilised. This means that you can’t just camp out with your enemies and ambush them, you have to create a plan of action that makes the most of the team you have at your disposal. You must consider their strengths when deciding how to take down one of the twenty plus enemy that you are being tasked with killing. With numerous types of missions available, initially the task doesn’t feel repetitive. As you progress through the game, the difficulty ramps up alongside the opportunity to upgrade equipment as well as your troops’ abilities, so though the goal may be challenging to achieve, it never truly feels unobtainable. To keep the player moving forward, you must complete the stage within a set number of moves, failure to adhere to this doesn’t fail the level, it just means that you must create a better plan to finish quicker. The in-game currency for new equipment is earned through slaughtering aliens, and the chips for upgrading your abilities are collected by achieving the mission goals. 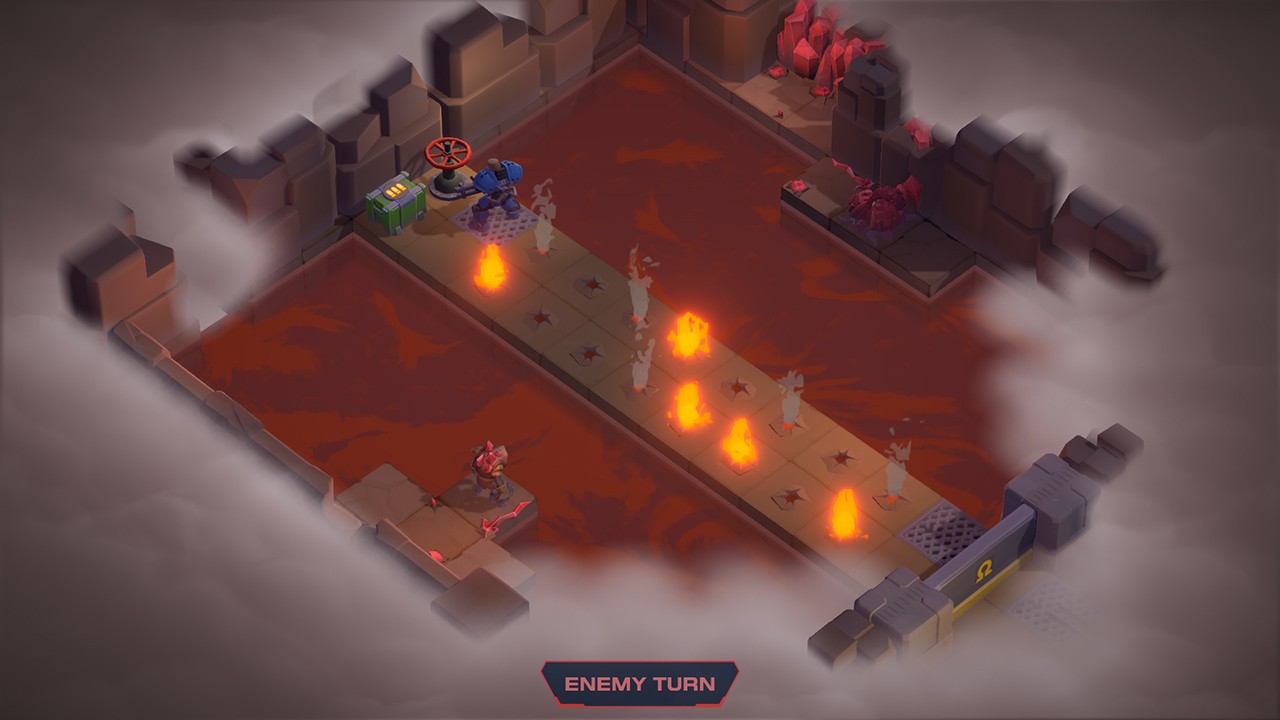 With the playable characters taking the classic cliched roles of medic, scout, gunner and grenadier, this was one of the areas that felt bland. Even the narrative which was very predictable tried to take a humorous twist. It worked, albeit in a very corny and cringeworthy 1970’s Sci-Fi TV program sort of way. I felt that the limitations of keeping each person within their set classes a bit too restrictive. It didn’t allow for any flexibility in how you approached each level. I would have liked to be able to create a team based around how I thought the game should be played, and not how the developers wished me to play it.

Spaceland really does look like a classic retro Atari/PC title. The graphics are of course more polished and lots of the details are much more defined than anything you would see in the early Xcom days. Tortuga team has done a great job of capturing that 80s/90s style. The colours used are vivid, which makes the action easy to follow, the art style feels like a cartoon and replicates Laser Squads approach fantastically well. The perspective in which the action takes place allows you to easily view the whole playable area, and the design around the narrative text took me back to playing early RPGs on my mega drive, it was a nostalgic trip that was absolutely delightful.

A very dated soundtrack attempts to back up the gameplay and graphics old school theme, classic laser weapon sound effects are joined by over the top explosions. The audio does well to compliment the action, with pipe music to emphasise the space theme whilst you walk around the world map, and then upbeat synthesised tracks accompany you while you try to complete each mission, the increased tempo adds to the feeling that you only have a limited time to successfully complete each stage.

When any turn based game comes to console, I always despair that the User Interface will be terribly clunky, and the control mapping impossibly difficult to follow. So it was a pleasant surprise when I discovered that this wasn’t the case. A simple UI with limited buttons to press to access each menu, and an even easier approach was taken when completing any mission. The game map is straightforward and very easy to navigate. You must follow a set line to each mission, where it is your choice to select which one you wish to tackle. 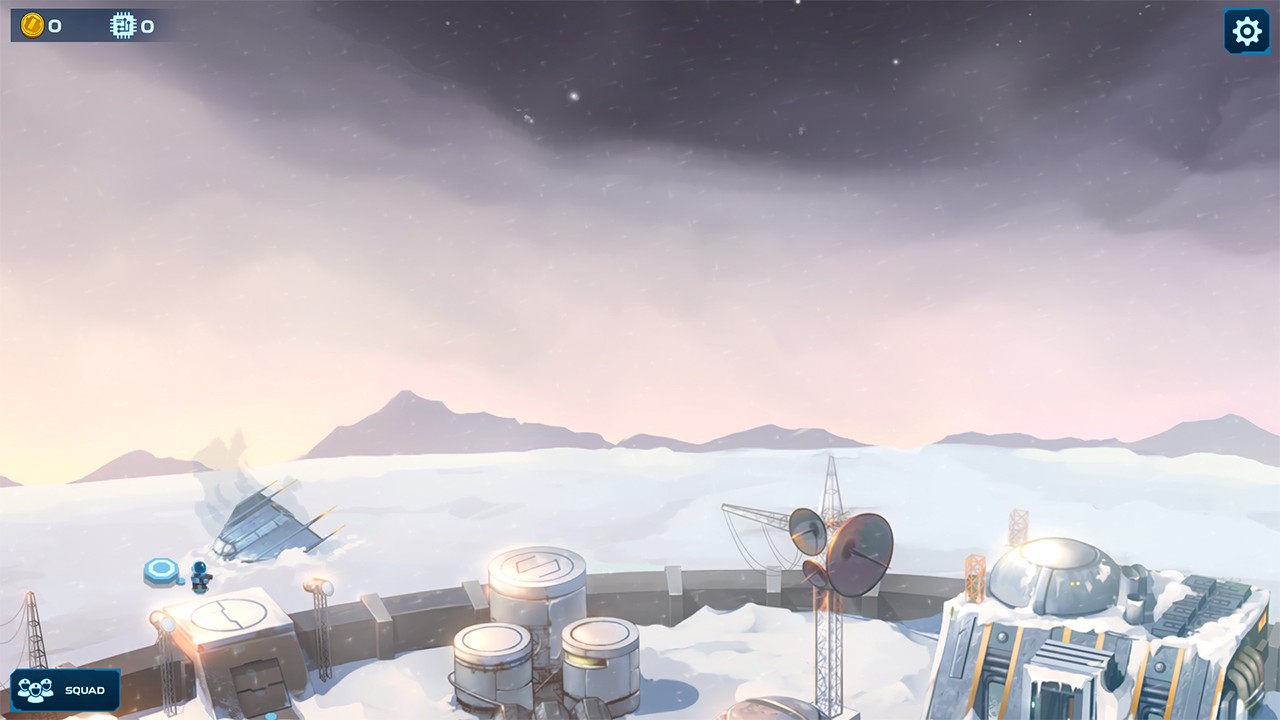 Once you purchase your game no matter the cost, you want good value for money, and a game that will have you coming back for more. With approximately 20 to 25 hours of gameplay for full completion, a number of specific tasks per level to complete, and player and equipment progression to get your teeth into, there really is plenty for you to do, and Spaceland really is good value for money.

For all of the positives, and there really are a lot of them, unfortunately there are some downsides. The first one: Though the variety in the missions help to keep the gameplay fresh, the requirement to repeat levels to obtain that completed game status makes the action a little mundane and repetitive. Now the second issue, and probably my biggest annoyance was the response lag, you would select a task, and the action would freeze on screen. This would happen for no reason, and for an unknown length of time, at one point I thought the game had crashed, only for it to jump back into life again. This may be due to me playing on an original Xbox One, but I suspect not. It doesn’t stop you from playing, it just takes away from the polished finish.

As a huge fan of the genre, this was always going to be a game that I enjoyed playing, the only questions would be; How much would I enjoy it? How does it compare with others in the field? I love the retro feel, the speed at which the missions are completed, the all out action approach, and the variance in the tasks. The developers have done a fantastic job of paying homage to the great turn based strategy games from the past. With quite a busy and congested market, and facing direct competition from a game I recently reviewed The Dark Crystal: Age of Resitance Tactics. This was always going to have to stand out, to be successful. I believe Tortuga team has done a great job in creating a bite sized strategy game that will attract the attentions of lovers to the genre, and new players alike. With the ability to easily pick it up and put it down, and the simple to learn game mechanics, it makes for an enjoyable, if not a little repetitive in places, title to add to your collection.

Fancy a retro turn based strategy game that has a variety of short and challenging missions? Then look no further. Assemble your team, and take down those aliens!