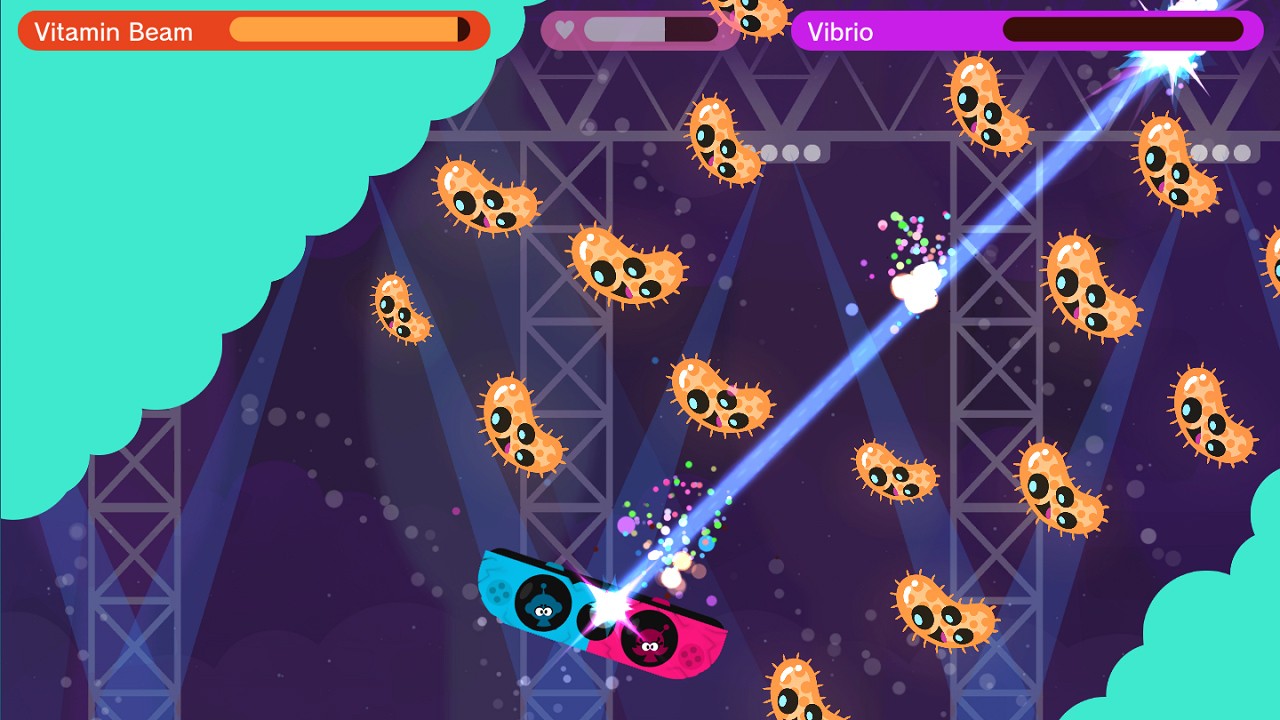 When a studio that isn’t specifically in-house Nintendo captures the real deal feel and ideology of a Nintendo game, it feels exceptionally special. Some people might say this is an unfair comparison for Wayforward: after all, they’ve been making games across multiple Nintendo systems for years now. But it still stands to mention that Wayforward is doing their work their own way, and things like Shantae, Mighty Switch Force and even Ducktales Remastered have that same vibe that feels right on the Nintendo forefront. With their latest title, Vitamin Connection, Wayforward once again grabs the core elements of what makes Nintendo the brand they are. Namely, cute, fun, challenging and memorable.

Vitamin Connection is a single or multiplayer game that puts you in the dual roles of Vita-Boy and Mina-Girl, the blue and pink counterparts that make up a very powerful medicine capsule. The story takes place over several days as we see the Sable family get gunked up with all sorts of coughs, sneezes, fevers and general ickiness that comes from, well, simply being human (and, surprisingly, a dog as well). We know our bodies are pretty tough vessels, and we’ve got a lot naturally that helps fight off infections and viruses, but a little help from modern medicine was never a bad thing. Moving forward against nasty bacteria and mysterious ailments, pilot the Capsule Ship through the different areas of the body, fight back to improve health and keep on living the great game of life!

With Vitamin Connection, you have the option to do single or double player, and, I must stress this, you should do two players. Vitamin Connection is a game that reminded me a lot of Snipperclips, in that it’s possible to do it by yourself, but it just takes away some of the enjoyment. The duties of the Capsule Ship are evenly split between the two characters: one player is piloting and aiming the Vitamin Beam (the laser attack that deals with infectious baddies), the other needs to actually trigger the Beam and rotate the ship to move through tight corridors. The body is far from a straightforward path, and you need to be able to twist appropriately to get through tubes and capillaries and whatever else is inside you (I didn’t do well in biology). Handling these responsibilities in a solo manner is mostly possible, but it’s significantly less fun because it has an element of crazy cooperation with another person on hand. Also, starting from the second mission, you have to manoeuvre this great grabbing claw to both push aside obstructions and attack certain enemies, and it felt nearly impossible to do on my own. If you insist on playing Vitamin Connection by yourself (by choice or by fate), make sure to properly calibrate your Switch beforehand: gyroscopic controls mean the claw is a freaking nightmare if you’re not seated correctly. 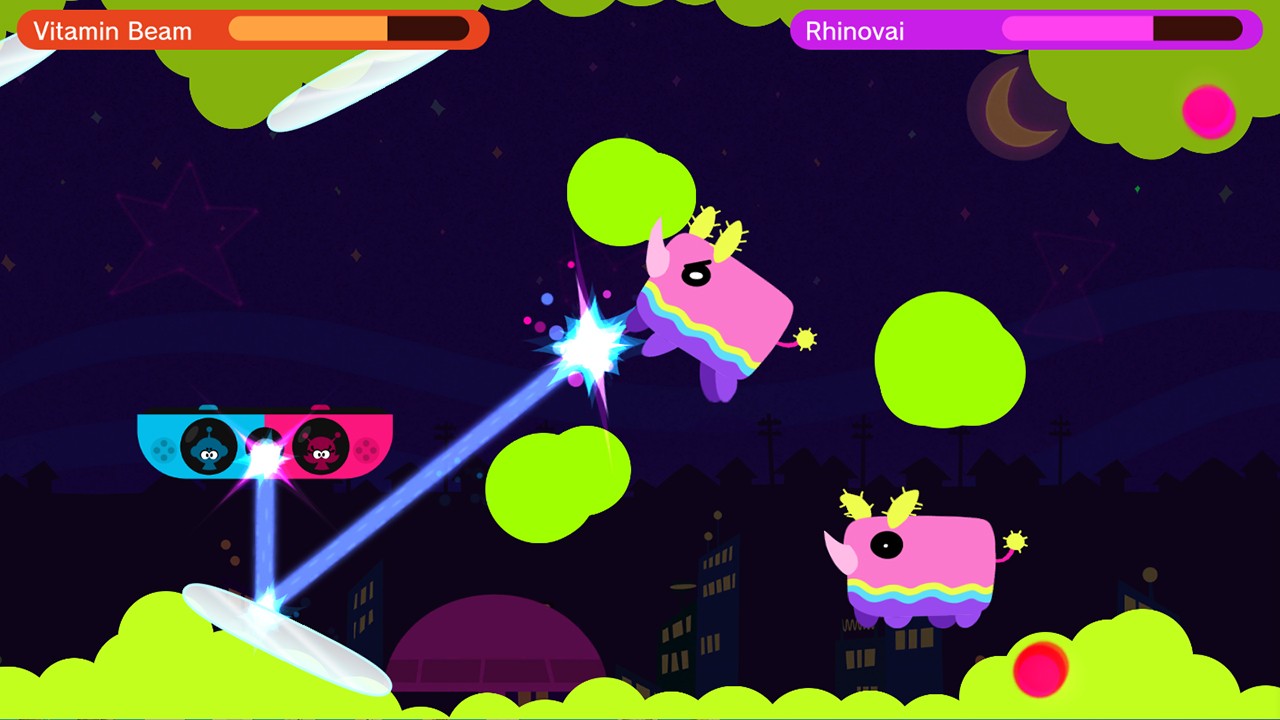 Now, as for the game itself, Wayforward does a ton right with Vitamin Connection. Firstly, the presentation. This game is so hilariously cute to behold and done with a cartoonish style that both makes it engaging and non-threatening at the same time. There’s plenty of instances where the game could have been scary or weird: after all, you’re travelling through a body and visiting vital organs where different diseases have taken up residency, and you need to disperse them. That, in and of itself, could be too weird. Instead, from our protagonists to the different foreign bodies that they fight, everything is pretty cute and memorable. Done up with splashes of neon color and Wayforward’s signature bouncy animation, you’ll have no problem accepting that you need to deal with a host of areas and characters, all of which have some basis of accuracy in their depiction. The fact is, we get to see things like probiotics and the endocrine system represented in silly, but not incorrect, ways and they make for important parts of the overall story of health.

Additionally, the audio is bangup. I’ve never enjoyed the use of English voices for a lot of video games (too much time with Japanese games made me a snob), but the dialogue and correct matching of characters to voices means that it’s worth listening to everyone. From the “old prospector” style of speaking that Endo has, to the screaming mania of Vibrio (“I MAKE DISASTER PANTS” is a goddamn t-shirt), I was inclined to listen as well as read. And that’s just the voice talent. The soundtrack is so bubbly and upbeat that I felt alive and excited to be battling disease! It sounded like there was a great blend of both English and Japanese pop tunes to make up the backbeat, and the songs were able to blend seamlessly together, utilizing different audio and incredibly catchy tunes that I wish I had right now. Sad news: the soundtrack is not currently on Spotify. C’mon, Wayforward, you let Limited Run have the CD for their edition (and it was really cool seeing them as a publisher for the game on the splash screen!), let the people have their awesome music on the go!

As mentioned above, the main gameplay for Vitamin Connection involves a mashup of Lovers in a Dangerous Timespace and Snipperclips with plenty of its own flair and majesty. You need to pilot the ship through the body, which is no small challenge. The Vitamin Beam can’t just shoot forever, your ship can take damage if you crash into too many things, and you’ll die if you take too long to move the obstructions and get pushed off the screen (again, have a second player ready to fight the good fight with you!). The monsters continually change, starting as straightforward annoyances and, eventually, becoming serious pains to dispatch (but not impossible). Navigation means some trial and error of going through the body, discovering secrets, dead ends and even traps set up by the diseases. It’s not always fun needing to backtrack and try different paths simply because you need to retread old ground, but it’s not all that arduous and you can use buttons to “fast forward” your flight back to the fork in the road. There’s enough variety and excitement each time you go somewhere, as the paths do re-spawn baddies and health powerups to keep you from getting too bored or becoming too overwhelmed. Then, when you reach the organs, the main game really begins. 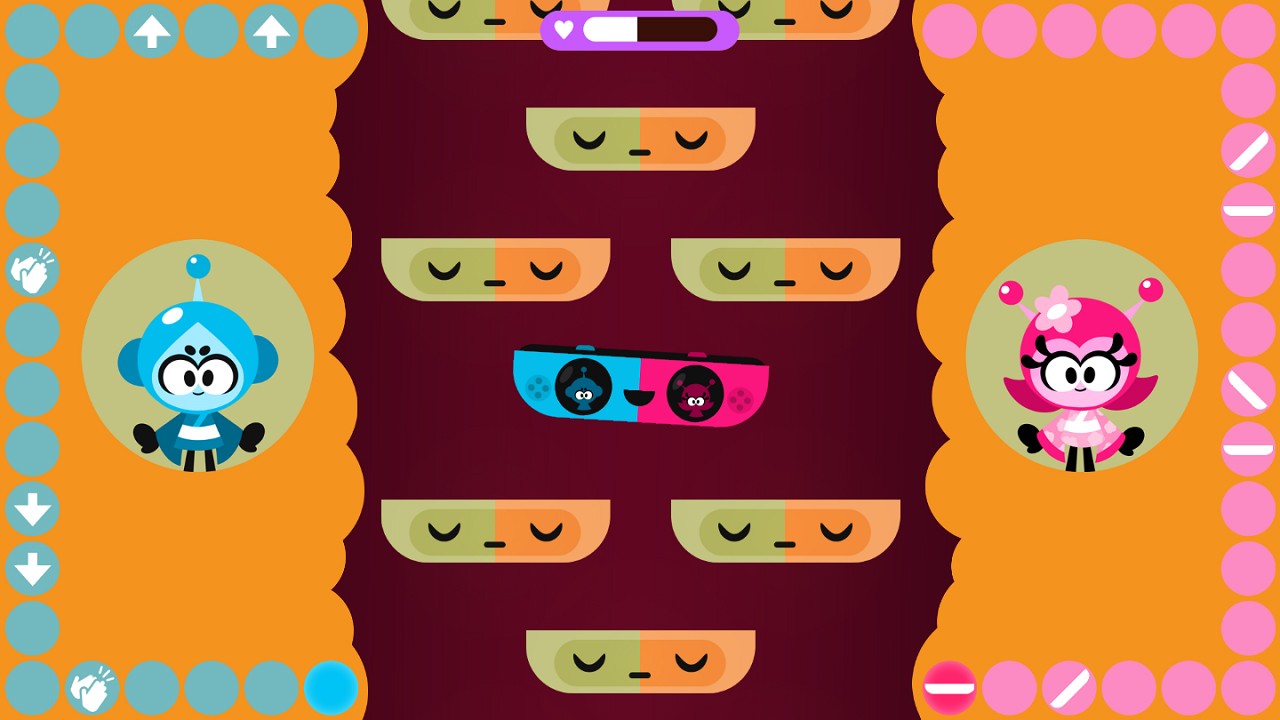 Each organ is a mini game of sorts, from a Simon Says dance routine to a careful Operation-esque navigation around some pathways, and all of them are fun, frustrating and require a bit of practice to get good. For example, one mini-game involves weaving through waves of bacteria a la Frogger to retrieve a glowing sphere and bringing it back down. I didn’t know that you could gradually extend your arm a little at a time (originally I was just shooting straight up as fast as possible), which meant that I could get much, much better at both not taking damage and having a faster time. These mini games are all fun in their different ways (the Simon Says is the most difficult for me), and you can practice them in the main menu for additional fun if you don’t have time to get through a whole body in a single sitting. These different story missions take about a half hour each, but you can bang out a few of the mini games in five, tops.

The simple word for Vitamin Connection is “delightful.” It’s fun, it’s cheery, it’s original and it gives players a quirky but important glimpse into what it means to be healthy and take care of yourself. The message of the game might not be “medicine makes everything better,” but you do feel in control of the health and well-being of these characters and have an absolute blast in the process. There’s no medical misinformation, it’s got a good amount of challenge for single and double players (PLAY WITH SOMEONE ELSE), and it’s one of the few games where I’ve said “Hey, can someone please sit down and play with me?” If you are looking for something a bit off kilter with plenty of game time and some memorable moments (and amazing music), then look no further: the doctor is in.

Take two of these and call me after you spend the whole weekend with a friend or loved one fighting disease.